"Succession" returns after two years, and the Roy family hasn't changed a bit

The Roys are still a disaster, obscenely wealthy and unable to figure out what they're doing. How we've missed them 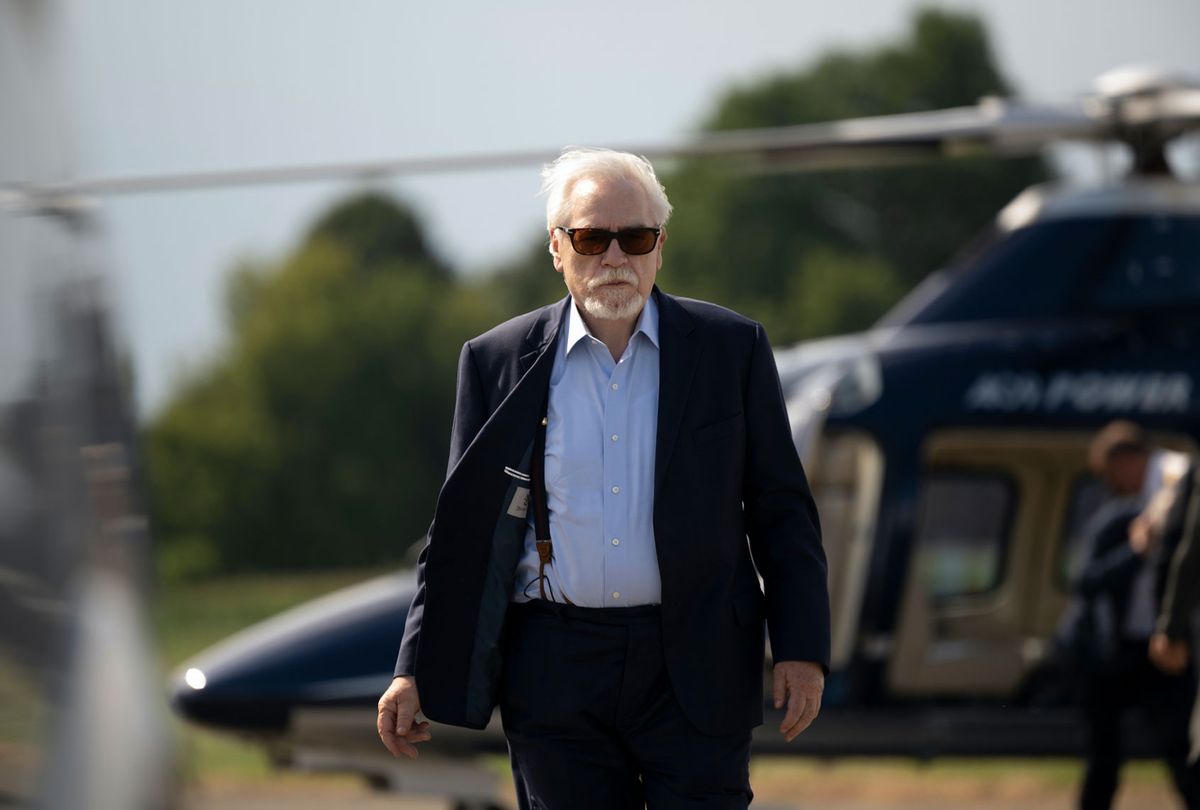 Self-styled "Succession" rebel Kendall Roy is the worst type of performer, in that he's a combination of terrible and confident.

No other stripe of man would stand in front of his media titan father, valued family friends and colleagues at a black-tie anniversary event, bust out a tone-deaf rap and believe he's killing it. But that's how things go down in the second season episode "Dundee," when Kendall (Jeremy Strong), Logan Roy's second eldest, takes the mic to deliver a tribute to dear old dad and shocks the room by introducing DJ Squiggle before launching into "L to the OG."

Many "Succession" aficionados think of the "boar on the floor" scene as one of the show's defining moments.  Citing that is as popular as quoting one of the Roy patriarch Logan's (Brian Cox) many profane outbursts, or giggling at the unfiltered rudeness of men in expensive suits. But if you really want to understand why Kendall's shocking betrayal at the end of season two constitutes yet another a remix of his behavioral theme, suffer through that rap one more time and take note of the bars.

The first lines are bearable enough, and Strong doles out Kendall's rhyme sauce assuredly.  But then we get to the refrain: "L to the OG/Dude be the OG/ A-N he playin'/Playin' like a pro, see!" His wealthy audience isn't so much cheering as egging on the Whitest Rapper Who Ever Whited to higher disaster peaks. His father's allies aren't sure how to react. The trust fund kids send up a few half-hearted, superficially enthusiastic hoots.

"You need to stop this," says his brother Roman (Kieran Culkin), while sister Shiv (Sarah Snook) is thrilled to watch her sibling rival flame out publicly and magnificently.

Think of the Roy family's third season journey as a drawn-out version of Kendall's cringe, only with steeper ramifications than mere embarrassment. When Kendall stood in front of a bank of cameras and implicated Logan's complicity in covering up sexual abuse and other crimes against humanity within Waystar Royco, he thought that for once he'd be seen not as a failson, but a whistleblower. Not as an unreliable drug addict but the lesser god undeservedly slain by his father only to rise again, ascendant.

Logan sees his son more clearly than he sees himself, patting Kendall on the back for a masterful play before laughing off his son's assertion that he really is disgusted by his father's crimes. "Tell him that I'm going to grind his f**king bones to make my bread," the old man growls over the phone to Kendall's assistant, quoting actual kid's stuff at his adult son.

"OK, well … tell him that I'm going to run up off the … f**kin' … bean stalk," Kendall conveys through his go-between, which makes Logan snicker like a fairy tale villain (and rightly so).

Kendall's failure to see the way the world works, and his place in it, is one of his largest weak spots. He sees himself as a major player, though he's really a small animal clinging to a mighty oak that has no intention of uprooting itself any time soon. That's how his father sees him, along with the rest of the world. On a charity gala's red carpet, he thinks he's gaining points by yelling "F**k the patriarchy!" as he poses for the cameras. Late night hosts make him a punchline, and he pretends the world is laughing with him instead of at him. He still thinks people enjoy his performance.

Then again, Logan isn't the fearsome beast he used to be, but nobody wants to be the one to admit it out loud — look at Kendall, after all. It's worrisome enough that when he answers questions about his company's health and future with "Tell 'em to f—k off!" everyone takes it as wisdom when in at least one situation that response is the product of temporary derangement.

Comedy erupts from tragedy in this show, making Kendall the saddest clown in this stretch limo. But "Succession" spreads the dark hilarity equally among the Roys, although it takes about two episodes for the show to regain the equilibrium that makes it the most hilarious drama on TV.

Smoothing rust out of the joints is be expected after two years off the air. More awkward is the show's reckoning with how political currents have shifted since then.

We recognize the Roys to be fictional stand-ins for the media families such as Murdochs, but their behavior is distinctly Trumpian. Logan Roy's cruelty and false promises are as familiar to us as the Roys' Fox doppelganger ATN is to the show's America.

Their only saving grace is the fact that Armstrong and his writers channel gloriously profane prose through each of them, ensuring that even the meanest, Roman, has a trickster's charm about him while the least – that would be Tom (Matthew Macfadyen) and cousin Greg (Nicholas Braun) – retain their humanity.

Still, it will be interesting to witness whether the Roy family's verbally abusive comedy hours satisfy in the way they once did. This nine-episode third round of "Succession" takes a slightly unfamiliar path through the archipelago of humiliations and embarrassments traveled in prior seasons.

This series' creator Jesse Armstrong reacquaints the audience with the Roys in the midst of an internecine war. Dealing with the fallout of Kendall's press conference has left Roman, Shiv, Roman's mommy-dom paramour Gerri (J. Smith-Cameron) and the rest scrambling, while it slowly dawns on Kendall that his media salvo could be as deadly to his reputation as that of his family and his father.

Soon, the family members thirstiest for Logan's approval either make a play for chairs closer to the head of the table, or begin researching which prisons are nicest and learning how to make a drinkable toilet wine.

"I'm worried about prison," Greg admits over a meal Tom tells him is a practice to stomaching jail food. "I just feel that because of my physical length, I could be a target for all kinds of misadventure!"

It's been a while, "Succession," but that's OK. Now we have better knowledge of each character's emotional map than ever.

Season one of "Succession" was an involved process as the show established the Roys' insular world of wealth and privilege. The second season is when the show figured out how absurd the people who make that world can be.

Armstrong and his team roll out a plush carpet for guest stars such as Sanaa Lathan, Adrien Brody and Alexander Skarsgård to step aboard.

The artistry is in the fact that these known players don't stand apart from the world. Lathan's extraordinary lawyer slips right into the fray, and Brody wears with ease the slouchy leisure couture of a billionaire investor. Helpfully, the actor always looks a little tired, aptly fitting for a man with too much money and time and little patience for a father-son squabble that's losing him hundreds of millions.

Strong has a way of conveying the tight, pointed superficiality of a know-nothing execu-bro who radiates enough competence to pull a room's attention.  Culkin hones a sadistic edge in Roman, one slicked with with flawless comic timing. Snook's polished chill balances Shiv's painful eagerness to be taken seriously by a boy's club that never will.

Then again, the Roys' prideful refusal to own up to their intellectual shortcomings is part of the reason for that. In one scene, Shiv upbraids a swollen-headed, far-right Republican at a swanky fundraiser she's attending in part to support her do-nothing brother Connor (Alan Ruck) and his dim political aspirations.

Ready to spar, the man asks, "Have you read Plato?" Odds are this guy probably hasn't save for a few lines on Wikiquote. But Shiv doesn't have enough strategic acumen to redirect the conversation or cover for her knowledge gaps, so she haughtily replies, "Uh, yeah. Remind me what happens."

Everyone in the world of "Succession" is some version of horrid, even the pleasant ones. Amazingly, though, the writers spin each arc in a way that makes you feel for them — even if it's tough to actually root for them. Shiv is a ball of frustration blocked from making any progress in winning anyone's respect, but we'd feel awful if she were the one set up to fail. Roman might be the one to go down, but if that happens we'll lose the charmingly weird foreplay energy permeating all of his dealings with Gerri.

Cox still provides the show's gravitational pull through Logan, but his performance is more generous than the man he's playing. In these new episodes, the actor lights the stage to give viewers a clearer view of his castmates' glow – and they're delivering true excellence in these episodes.

Even so, three seasons is enough to make a person wonder how long Logan's game of using his company's legacy as a cudgel with which he emotionally abuses his children is sustainable. I don't say this out of deference to the assumption that people want kinder stories to balance out a world that's gotten harder; besides, that argument doesn't really hold up when it come to this show.

"Succession" works because it confirms our suspicions that exorbitantly wealthy are not better or smarter than the average person, or even worthy of wielding the power they've inherited and hoard. Chucking at the venality of the people who hold the world and care nothing about anyone on it who isn't them is a mild temporary antidote to what ails us.

Vicariously enjoying their ridiculously posh meals and ridiculous parties helps too, mostly because they're distracting and fertile with possibilities for verbal and situational misadventure. Nothing could possibly top the top-shelf disaster of MC Ken in that department, but nine hours of solidly wrought satire and brutal snark is a much tastier payday. To paraphrase one of Kendall's hip-hop victims, this show is burning my eyes, but nothing can persuade me to look away.

The third season of "Succession" premieres at 9 p.m. Sunday, October 17 on HBO.