Tucker Carlson, Joe Rogan and the Proud Boys: How the fragility of the male ego fuels the far-right

Authoritarians know how to play on the gender anxieties of insecure men, building up an army of bitter chumps 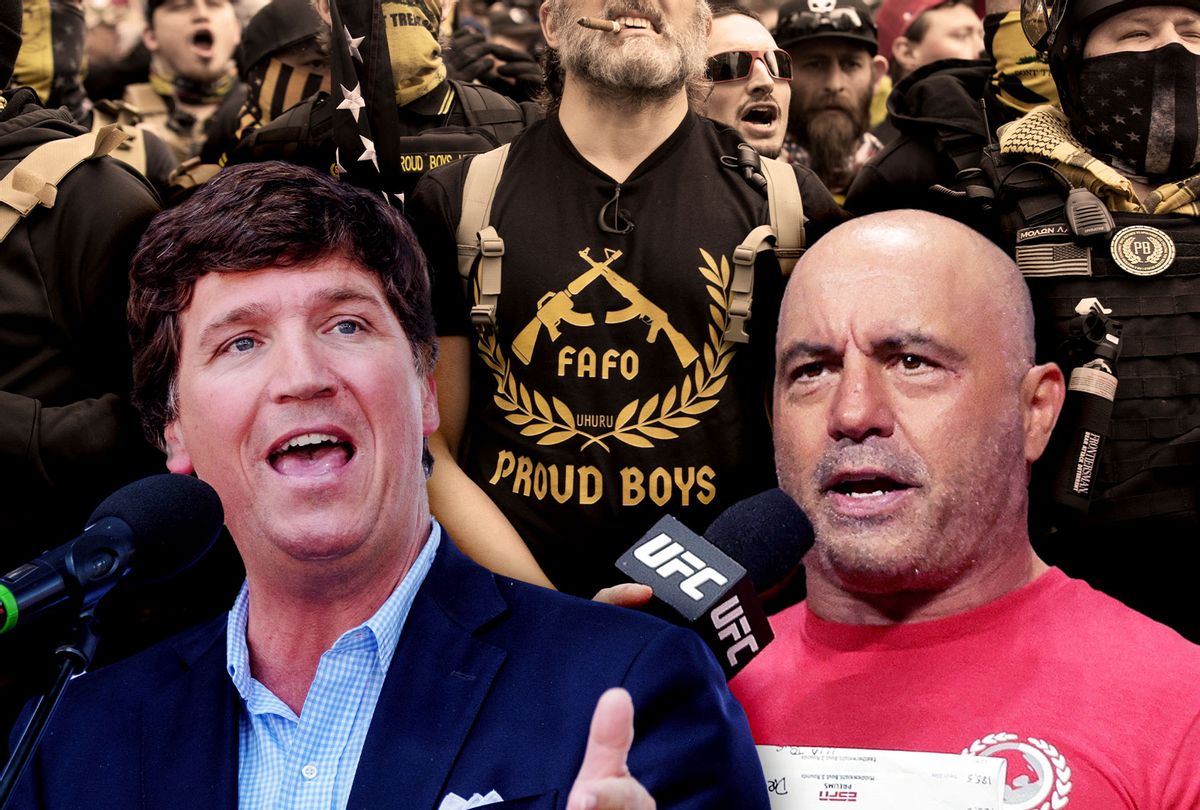 The Proud Boys had another rally in California over the weekend, and a telling moment was clipped and shared by Ron Filipkowski, a lawyer turned chronicler of the far-right. One speaker, armed with a bullhorn, pointed to a group of Proud Boys and declared, they "got some single real men over here looking for some housewives." The men in the clip then joined together for a photo, flashing the "OK" symbol that has been appropriated as a way for white supremacists to signal each other while also — always — trolling the left.

At the Proud Boys' 'Fall Love Fest' rally in LA yesterday, speaker announces that many of them are single and "looking for house wives." pic.twitter.com/uNVFGolTVi

In the space of a minute, it was a perfect illustration of the two-step process that the far-right has used for years now to recruit new followers: First, bait insecure men with fantasies of female submission. Once they're in, recruit them to white supremacy.

The misogyny-to-white-supremacy pipeline has long been well-documented, but in the past year and a half — with the rise of QAnon and the anti-vaccine movement, both perceived as more female-friendly than groups like the Proud Boys — the centrality of misogyny to authoritarian recruitment has faded somewhat from the discourse. Recent events, however, have been a strong reminder of how crucial gender anxiety is to far-right recruitment.

Authoritarians prey on insecure men, feeding them a story of how all their gnawing self-doubts can be silenced by embracing an unapologetically male chauvinist attitude. They recruit such men with a fairy tale about how the modern world is scary and confusing. The solution, they say, is to return to rigid, unforgiving gender roles that just so happen to value straight, cis men above all other people.

Last week, Fox News host Tucker Carlson — who has perfected the art of trolling as a far-right recruitment strategy — managed to get some juicy bait out there, by sneering at Transportation Secretary Pete Buttigieg for taking paternity leave. Buttigieg, who is the first out gay man to be a Cabinet secretary, recently adopted a pair of twins with his husband. Carlson didn't hesitate from being a real pig about it, wondering if Buttigieg was "trying to figure out how to breastfeed."

As feminist writer Jessica Valenti noted in her newsletter, in the past, Carlson has done segments of his show denouncing "fatherless" homes and claiming children brought up in them are "poor, uneducated and have disciplinary problems." But now he, a father of four, is making fun of men who actually want to be present in their children's lives. "Are fathers necessary for stable families and children, or is spending time with your kid a sign of weakness and something to be laughed at?" Valenti asks.

What this dissonance reveals, of course, is all the hand-wringing about "fatherlessness" is just a feint. After all, many divorced or separated fathers are deeply involved with their children's lives. No, as the Proud Boys rally this weekend showed, what's really at stake is anger at women for rejecting subservience. Single mothers, same-sex marriages, and egalitarian marriages all show that there's nothing inevitable about male-dominated marriage. That threatens men who are attracted to the dominance fantasy of traditional marriage to silence their own nagging sense of inadequacy.

It's not just Carlson and the Proud Boys who have figured out how to monetize male mediocrity and fragility.

Podcaster Joe Rogan has made a mint off of appealing to the sea of men who want an easy boost to their self-esteem through chauvinistic chest-thumping, rather than developing real skills and a personality. Rogan can be a little more subtle than Carlson about it, but ultimately, they're playing on the same set of anxieties and insecurities in American men, and prescribing the same toxic masculinity as a supposed cure.

In Rogan, it's easy to see, for instance, how refusal to get the COVID-19 vaccine got encoded for the fragile masculinity set as a way to "prove" their manly bona fides. He falsely claimed that "healthy" men who are "exercising all the time" don't need the vaccine. He repeatedly suggested that vaccine mandates were somehow an assault on freedom, rather than what they are: a common sense health measure that helps free everyone from far more miserable pandemic restrictions. Taken together, it paints a picture of vaccination as the behavior of supposedly weak men. Unsurprisingly, then, Rogan ended up with COVID-19 and had to admit that he had kept finding excuses to put off getting a vaccine he had routinely insinuated was emasculating.

Carlson went after a gay man with a breastfeeding joke. Rogan's preferred target for exercising his gender anxieties is all too often trans people.

Rogan has repeatedly used his show to make fun of trans people, paint being trans as a perversity, and elevate anti-trans bigots as somehow experts on the subject. Now that comedian Dave Chappelle has joined in making being transphobic a point of pride, unsurprisingly, he and Rogan are going on tour together. The obsession with trans people isn't just gross, it's a little confusing. Why do these cis men care so much about the lives of trans people who have nothing to do with them?

The ugly truth is that trans people, because they're a small and misunderstood minority, just feel like an easy punching bag for these insecure men to take their gender anxieties out on. The very existence of trans people is a reminder that gender — and therefore gender hierarchy — is a social construct, and therefore can be analyzed, criticized, and even changed. Or, as in that famous 2019 rant from a One America News Network host, transgender penguins are a threat to the "family unit" and everything conservatives hold dear.

For men who rely heavily on their belief in male superiority to bolster their self-esteem, the realization that gender is socially constructed is a distressing thought, and they take their rage about that out on trans people.

The irony is that no one proves the truth of gender's social construction more than the men who flock to Carlson and Rogan's show or join groups like the Proud Boys. None of them clearly feels confident that manhood is much of a biological, irrefutable fact that they claim it is. Instead, they are constantly trying to "prove" it, from demanding female submission to bashing trans people to refusing a vaccine. If masculinity isn't a social construct, then one wouldn't need to put so much work into socially constructing it.

It's funny to laugh at the deep-set insecurities that drive this kind of behavior. However, it's a problem for the entire country and one that's getting worse, not better. The people marshaling all this silly male angst aren't just making money from it. They're building an authoritarian political movement, one that is backing Donald Trump, the perfect avatar for inadequate men who think being a sexist bully somehow makes you a "real" man.