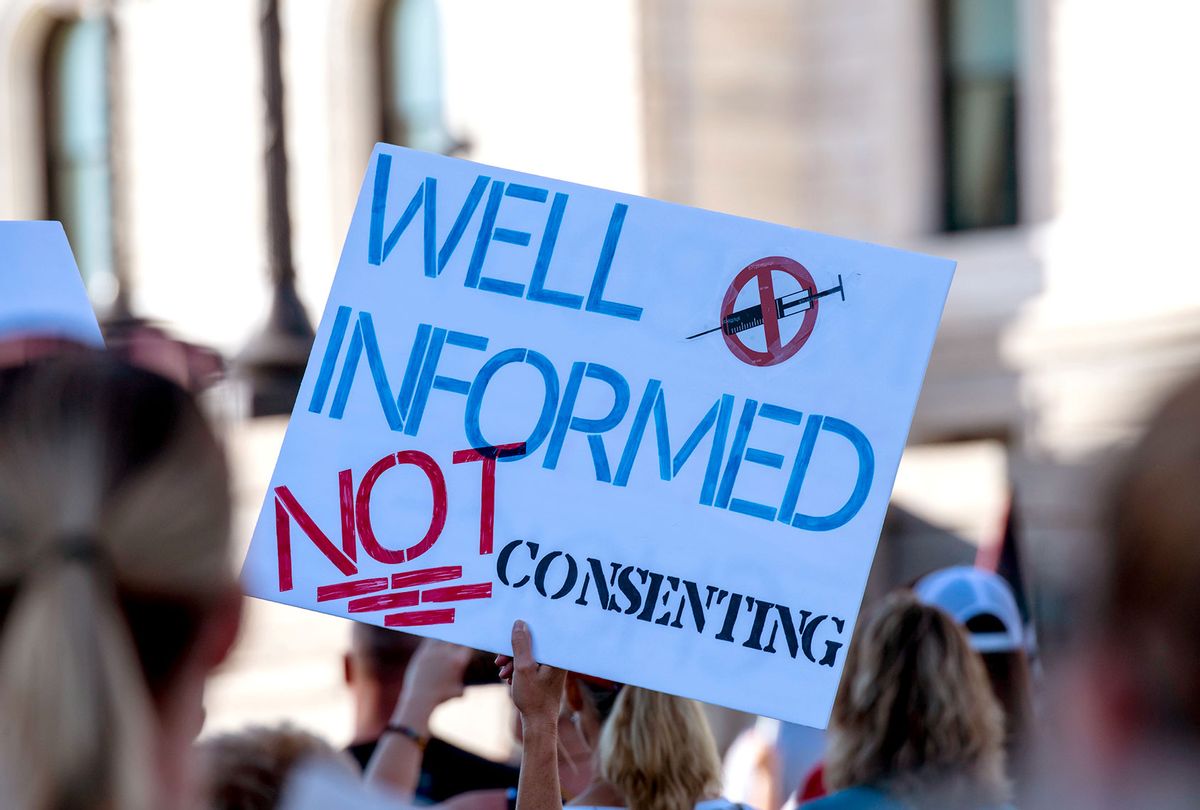 It happened three times yesterday, and I only watched or half-watched a few hours of TV news. It happens every day, it seems. Somebody wonders out loud (yesterday's most prominent was Alex Witt with Dr. Anthony Fauci) why over 60 million Americans who are eligible to be vaccinated are still refusing — including hospital workers in some parts of the country.

Everybody treats it like a confounding question with no easy answer. The actual answer, though, is pretty straightforward: The psychopaths running the right-wing media ecosystem dominated by Fox "News" and social media, and echoed by 1,500 radio stations across the country, have decided that people dying and being disabled is both profitable and politically advantageous to them.

When Joe Biden was elected president, the Republican Party and their joined-at-the-hip right-wing media did a sudden about-face from praising Trump's "Operation Warp Speed" to encouraging their followers to remain unvaccinated so President Biden would struggle to get the economy back on sound footing.

That, they figured, was their best bet to take back Congress in 2022 and the White House in 2024, and they've stayed on-message ever since Biden took office on Jan. 20. As I noted in considerable detail back in July, death is their political strategy.

And now, as if to put a punctuation point on it, the headline at Raw Story warns: "Fox News host uses Colin Powell's death to launch anti-vax rant: "Fully-vaccinated are dying of Covid."

Almost 750,000 Americans have died of COVID, and recent research published by the Journal of the American Medical Association concludes that at as many as half of the 45 million Americans who've been diagnosed with the disease will suffer long-term consequences, the main ones being dementia, exhaustion and damage to the heart and kidneys.

It used to be in American business that you knew where the psychopaths were: Big Tobacco. It's an industry producing a product that, when used as directed, kills around a half-million Americans every year.

Being able to comfortably fall asleep every night knowing that the product of your workday had killed another 1,300 people is a rare competence that typically requires the mental illness of psychopathy.

About 1% of Americans are psychopaths, although such people tend to be concentrated in some areas: As many as 12% of major corporate CEOs are believed to be psychopaths, and about 15% of people in prison.

A psychopath, for all practical purposes, believes that he's quite literally the only "true human being" on planet Earth.

Everybody else is an actor of some sort, a prop, in the grand play of the psychopath's life. Everybody else is here to make him happy and meet his needs, and he doesn't have to worry about hurting them or not meeting their needs because they are not "real people" like he is.

The clinical terminology is that psychopaths "lack the ability to feel empathy." Weirdly, this lack of empathy can make them more successful in big business and politics, as well as in criminal and prison environments.

Thus, the CEO of Fox "News" — the network that daily spreads vaccine misinformation leading to deaths that are tearing apart American families — tells the Hollywood Reporter that she sleeps "well at night." Just like the tobacco CEOs.

Meanwhile, people who watch Fox and all its imitators across various media are taking the implicit advice of Fox's primetime hosts and avoiding vaccination … and getting sick and in some cases dying.

They're embracing quack cures promoted on the network and across right-wing media, including hydroxychloroquine and ivermectin, giving their viewers the false sense of security that if they get sick with this awful disease there's a ready cure at hand … so there's no need to get vaccinated.

Even worse, consumers of this media are doing their best to disrupt rational public health efforts like mask and vaccine mandates by harassing public health officials, school boards and elected representatives across the country — all leading to even more disease and deaths.

When Americans realized, mostly as the result of massive lawsuits in the 1990s, that the CEOs of the tobacco industry were knowingly killing people (and even reaching out to addict children) we took action.

We limited access to this death-dealing product, from outlawing television advertising to limiting placement of cigarette vending machines and strict enforcement of age-limited retail sales. We also required that the product be honestly labeled: "Tobacco kills."

This isn't an option for media, and rightly so, because of our First Amendment protections of the press (including this article).  And nobody wants to take those freedoms and protections away.

But the most important and effective campaign our nation embarked on to cut tobacco use was the nationwide campaign to educate people about the dangers of tobacco use. We taught adults and schoolchildren alike how the industry was trying to addict them, and showed them the consequences of using that deadly product.

Now that right-wing media has arguably caused more Americans to die in the past year than has tobacco, it's time to consider a similar strategy to balance the lies and misinformation streaming out of them every day.

If we can't rely on the news and social media industries' content producers or executives to stop spreading death-dealing misinformation, we can at least wake people up to the dangers of their products.