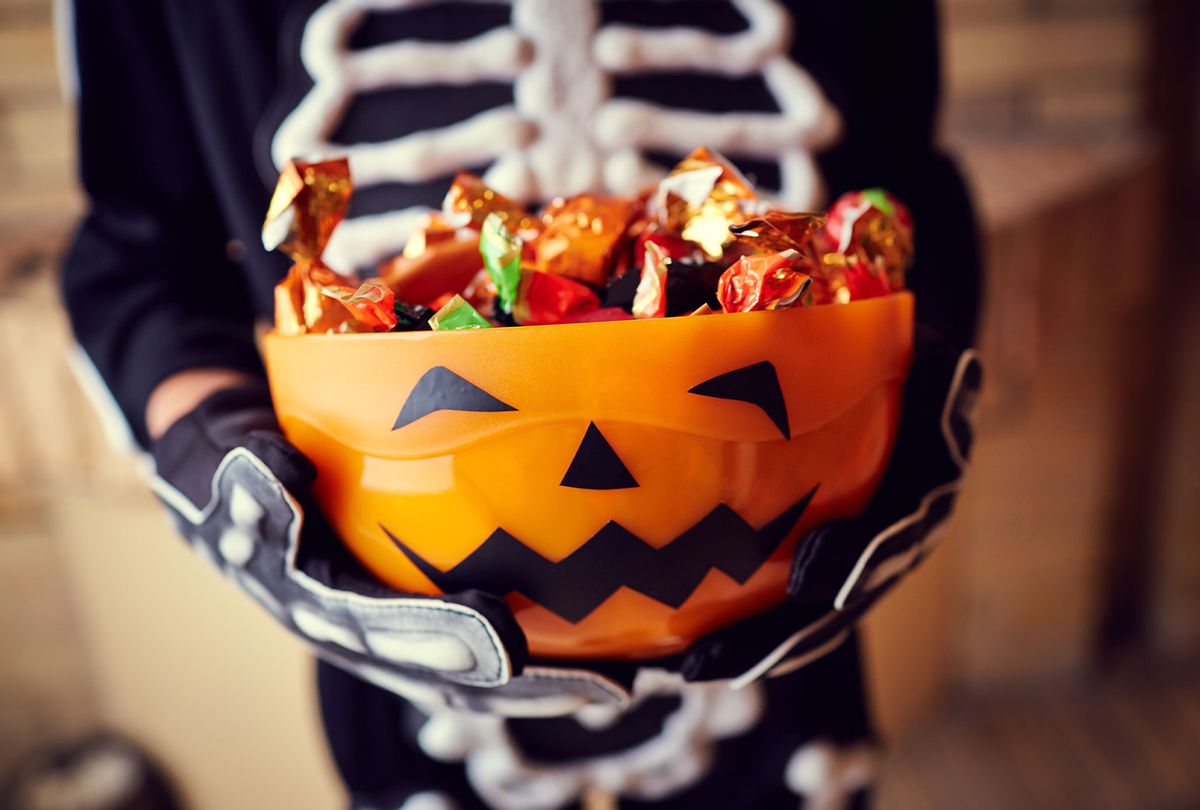 In the summer of 1998, food writer and TV host Kae Lani Palmisano's family had just moved into a new house in a new neighborhood. She was eight years old, and when Halloween rolled around several months later, her father had an idea for a prank.

"My dad thought it would be hilarious to have an actual bowl of candy, but before presenting that to the children, he would present them with a bowl of apples with razor blades and syringes very obviously sticking out," Palmisano said. "He had a very dark sense of humor."

That said, according to Palmisano, the joke was incredibly short-lived.

"He was like, 'Oh, man, people are just like, not enjoying this joke," she said. "He abandoned the mission immediately within the first half-hour of trick-or-treating."

Every year, as soon as the weather begins to take on an autumnal chill, the warnings begin: Beware of tainted trick-or-treat candy. The method of purported contamination varies — broken glass, cyanide, drugs, injectable poison, splintered needles — as do the motivations behind why someone would distribute such candy, but parents are cautioned every Halloween to check their children's trick-or-treat buckets.

There have been some tragedies involving poisoned candy; most notably, Ronald Clark O'Bryan, who was nicknamed "The Candy Man," was convicted for the murder of his son in 1974 after feeding him a potassium cyanide-laced Pixy Stix. However, the number of incidents have been relatively small in comparison to the amount of panic that the concept of malicious strangers handing out bad candy elicits year after year.

So how did this idea, which is largely an urban legend, start? And why has it persisted generation after generation?

The origins of trick-or-treating are murky. In Scotland and other parts of Britain, the practice of "guising," putting on a small performance in exchange for a sweet treat or change, has been a Halloween tradition since the 16th century. In the U.S., the first use of the term "trick-or-treating" appeared in a national publication, "The American Home," in 1939. The practice was solidly embedded in American culture by the 1940s as several popular radio dramas, and children's magazines mentioned it, followed by an early 1950s Walt Disney cartoon called "Trick or Treat" starring Donald Duck.

Originally, handmade treats and candies were the standard, but by the 1960s, things shifted. Women were working outside the home and remaining unmarried with more frequency, and convenience foods were on the rise. Neighborhoods were slowly becoming more integrated, and people became more wary of who was giving their children candy due to racism, sexism and general anxiety about a society in transition, according to Samira Kawash, author of "Candy: A Century of Panic and Pleasure."

In an interview with Food52, Kawah said, "Candy makers started promoting candy for trick-or-treating in the 1950s and offering treat-sized packaging, but it was in the 1960s that candy really started dominating."

"It was a lot easier to just pick up a package of pre-portioned treats at the grocery store, for one thing," she said. "But Americans were also becoming more suspicious of strangers and of unwrapped treats and homemade goodies that seemed like they might not be safe. Wrapped and branded candies seemed inherently safer."

Culture continued to shift through the 70s, which led to moral panic and the earliest threads of Satanic panic, which, honestly, persists in evangelical communities even today. (Growing up in a conservative Baptist church, I personally grew up hearing that Halloween was "the devil's holiday" or "the devil's birthday.")

"There's a nascent opposition to Halloween," Jason C. Bivins, author of "Religion of Fear: The Politics of Horror in Conservative Evangelicalism," told TIME. He cited anxiety over the glorification of "occult themes" by rockers like Black Sabbath and the fear that devil-worship might be taking place.

"There's a real sense in the early 1970s that people are starting to almost aestheticize evil, and [opponents] see that in rock music and the increased popularity of Halloween," Bivins said.

This led many leaders in Christian communities to stoke fears about allowing children to participate in typical Halloween festivities like trick-or-treating, and community and religious leaders hosted alternative costumed activities in response such as "trunk-or-treats" or contained trick-or-treating at shopping complexes and malls. There, parents could be assured that the candy their children receive is "safe," as are the adults with whom they come into contact.

Still, the potential for danger has been largely overstated.

According to a study by Joel Best, a sociologist at the University of Delaware who has studied candy-tampering legends, fewer than 90 instances from 1958 to 1983 might have qualified as "actual candy tampering," but in none of those cases does he attribute them to "random attempts to harm children." When candy tampering has occurred, it's often — as in the case of "The Candy Man" — carried out by relatives or someone else who knows the child.

So, why does the urban legend persist? According to Kawash, "candy [is] just an easy scapegoat for many other ills," and it gets tied up with new anxieties.

Pastry chef Harry Rubenstein grew up in Long Island and remembers his parents checking his candy.

"We weren't allowed anything that wasn't wrapped," he said. "I always resented having to throw out a great-looking candy apple one year."

He recalled that this was connected to his parents' anxieties surrounding the then-recent 1982 Chicago Tylenol murders, during which seven victims took Tylenol-branded acetaminophen capsules that had been laced with potassium cyanide. They all died.

Each new generation brings a new fear — from the Tylenol murders, to anthrax, to the legalization of marijuana.

In September, Philadelphia news anchor Jaclyn Lee tweeted a photograph of several snack foods that contain THC. While they are clearly branded as edibles, with names like Stoner Patch Gummies and Medibles Cheetos, Lee wrote: "BEWARE: As Halloween gets closer, @BensalemPolice are warning parents to LOOK at your child's candy before they eat it. They confiscated these snacks that look a lot like the real thing. All are laced with THC."

The tweet went viral, with many Twitter users admonishing Lee for alleged fearmongering and taking a police statement at face value without fact-checking. And, as one commenter wrote, "Is this the new razor blades in candy thing that also never happened? Because people are not going to be giving away their expensive, beautifully packaged edibles to kiddies."

The prevailing message in the comments was encouraging people — parents and children — to just use common sense, both when it comes to consuming candy from strangers and in the narratives you believe about the communities in which you live.

It's the same message, Kae Lani Palmisano, said that her father was trying to get across through his icily-received Halloween prank back in 1998.

"I think from his perspective, he was just kind of like, "Use your common sense," she said. "The bowl of apples with literal razors sticking out is a bad choice. Use your common sense when going out and trick-or-treating and be the judge of what is safe for you."