The truth behind my grandma's (not-so-secret) corn casserole

And how I found out that everyone eats it, too 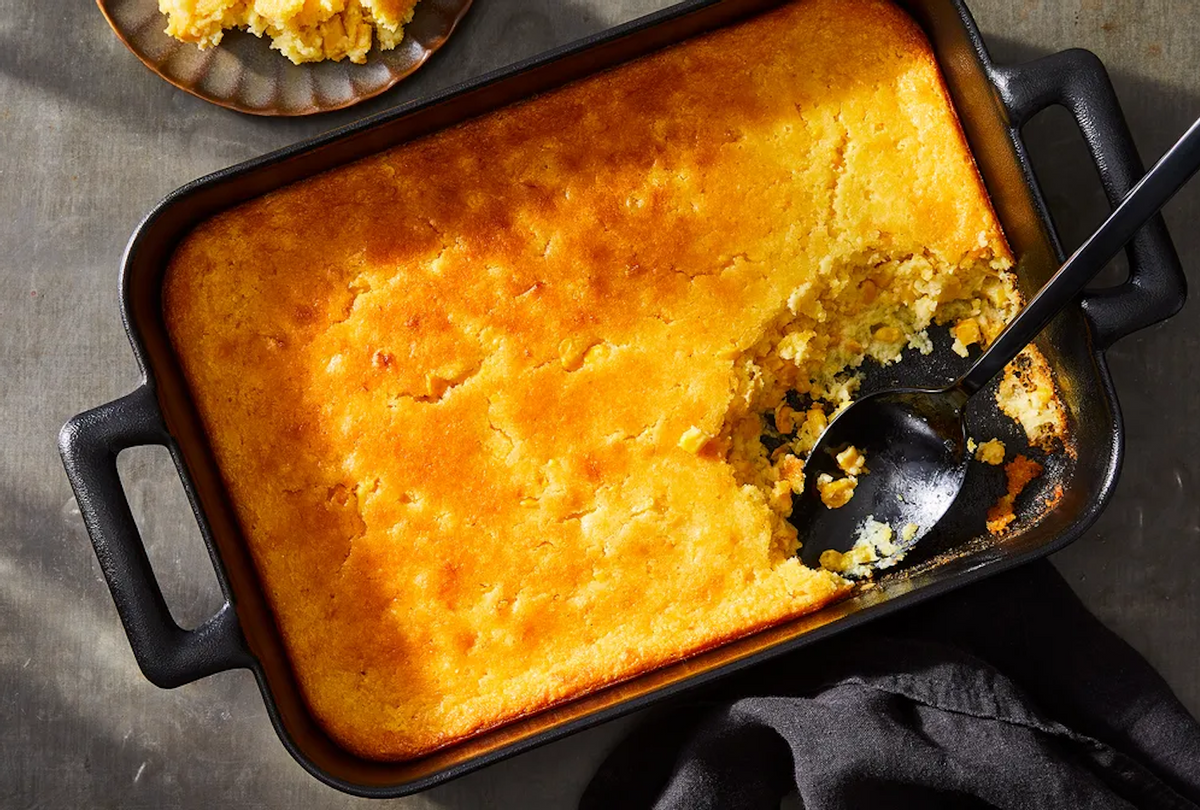 I grew up eating what I know of as corn casserole and what you may know of as spoonbread or corn bowl. It's not quite cornbread, but also not a layered casserole or gratin. To call it magical might be a bit of an overstatement, but not by much. Every Thanksgiving for as long as I can remember, my grandmother served corn casserole as a side dish alongside other classics: mashed potatoes, green bean casserole, dinner rolls, the works. But corn casserole is in a league of its own. Grandma always serves it in an opaque brown glass Pyrex bowl with a large spoon for serving big scoops. You don't have to do it this way, but in my book, it's the only way to do it. It's Grandma's way.

If you've never tasted corn casserole, it's creamy and soft, golden brown on top and pale yellow beneath the surface. It's studded with whole corn kernels so you get a slight crunch without distracting from the uber-moist casserole. On Turkey Day, I help myself to seconds and thirds and take some home for a late-night snack (aka 8 p.m. on Thanksgiving night, approximately five hours after we finished eating).

For years, I thought corn casserole was something that my grandma invented. After all, she is the superstar behind other Caron family chart-toppers like anise sugar cookies at Christmas, a perfectly meaty, cheesy, saucy lasagna for Father's Day, and banana cream pie for my grandfather's birthday (it's his all-time favorite and one of mine, too). I thought I was in an elite class of 11 family members who had the distinct honor and privilege of eating corn casserole on Thanksgiving.

But when I was 10, I asked my parents to help me film my own home cooking show. I was thoroughly obsessed with Giada de Laurentiis and wanted to play the role of "Food Network" host. The show was titled "Seasonal Cooking with Kelly Vaughan" and the theme song was performed by yours truly on a clarinet. (Naturally, I won a few Emmys and Grammys.) In the first of just two episodes, I decided to try my hand at making Grandma's corn casserole. I asked her for the recipe and she gave me a handwritten card that called for just six ingredients — Jiffy Corn Muffin mix, sour cream, eggs, melted butter, a can of creamed corn, and a can of whole kernel corn. I was shocked that it wasn't an entirely from-scratch recipe she had made up.

The history of cornbread

Let's rewind a bit to the 16th and 17th centuries. Long before Grandma was making corn casserole with corn muffin mix, long before a regular cornbread recipe called for buttermilk, eggs, sour cream, and melted butter and was cooked in a cast-iron skillet or muffin tin, Native Americans were making bread with ground corn, salt, water, and bear or hog grease, according to Charles Reagan Wilson, editor of "The New Encyclopedia of Southern Culture."

The bread would either be baked in a fireplace with coals (a style of bread known as "pone"), on field hoes (for what we now know of as hoecakes), or cooked in boiling water (for a version of a johnnycake). It wasn't until the 19th century that home cooks started making other variations of cornbread like hushpuppies, griddle cakes, and corn muffins, and would experiment with adding ingredients like sugar, eggs, self-rising flour, and onions, says Wilson.

Spoonbread (aka corn casserole) made with butter, milk, and eggs wasn't introduced until after the Civil War. However, it made a big splash once it debuted in society. "Spoonbread is perhaps the highest culinary attainment of cornbread," writes Wilson. "[Writer] Redding S. Sugg Jr. called it 'the apotheosis of cornbread,' and [restauranteur and author of "Bill Neal's Southern Cooking"] Bill Neal referred to it as 'an elegant soufflé; the fabled spoonbread, a mainstay of the aristocratic southern table.' [Journliast and civil rights activist] John Egerton has described it as a 'steaming hot, feather-light dish.'"

Seems like I'm not the only one who is mesmerized by cloud-like creation that is spoonbread aka Jiffy's corn casserole.

Wilson explains that as cornbread recipes evolved throughout the 19th and 20th centuries, southerners were more likely to make theirs with yellow cornmeal and northerners gravitated towards white cornbread. Cornbread became integral to American cuisine, particularly in Black American culinary traditions. And if you're wondering, Jiffy Corn Muffin Mix is made with yellow cornmeal, which means that their corn casserole recipe is more traditionally southern.

It wasn't until the mid-20th century that Jiffy invented their now-treasured recipe for corn casserole. At the time, it was developed under the name "Corn Bowl." The Corn Bowl recipe first appeared in the 1960s as a recipe tear-off sheet in retail grocery stores. In 1976, the recipe was renamed "Spoonbread" and re-published in Jiffy's first-ever recipe book. In 1995, I was born and probably started eating corn casserole as soon as my pediatrician okay-ed solids.

Although it feels like I've been eating corn casserole on Thanksgiving for my whole life, Grandma doesn't remember exactly when she started making it. However, her most epic feat was making a triple batch for the Vaughan's Oktoberfest, an annual party hosted by my parents on the weekend of Indigenous Peoples' Day, our own version of the German festival. "I made a triple recipe in a big lasagna pan for the Oktoberfest," she said. When I told her she should make a triple batch every year for Thanksgiving, she laughed and said "As long as I don't have to do the turkey."

If you're not going to make Jiffy's Original Corn Casserole in a lasagna pan, Grandma has some tips for making a more manageable portion. "It could be done in any four- or five-inch casserole. I wouldn't make it in a pie plate because it needs to be thick. But you could also do it in a bread pan." A loaf of corn casserole?! I think we just invented something new, Grandma! A few years ago, I tried making my own version of corn casserole entirely from scratch, no Jiffy Corn Muffin Mix needed. I added fresh sage, swapped in crème fraîché instead of the usual sour cream, cooked it in a cast-iron skillet, and even demonstrated how to make it on a local TV show in Connecticut (my "Food Network" hosting dreams were finally coming to fruition). The recipe was good, but not nearly as good as Grandma's.

But once again, we're not the only ones trying to reinvent the classic. Forty-five years since the first recipe for "Corn Bowl" was published, Jiffy has updated the recipe with a brand-new Street Corn Spoon Bread recipe, a modern iteration of a mid-century side dish staple. It's the first time the brand has ever changed the recipe. But I'm still sticking to Grandma's. Whether or not she invented it, she has perfected it.