How Netflix's "Maid" shines a spotlight on food insecurity

When Alex is tasked with cleaning perfectly fresh food out of a client's fridge, it's a metaphor for so much more 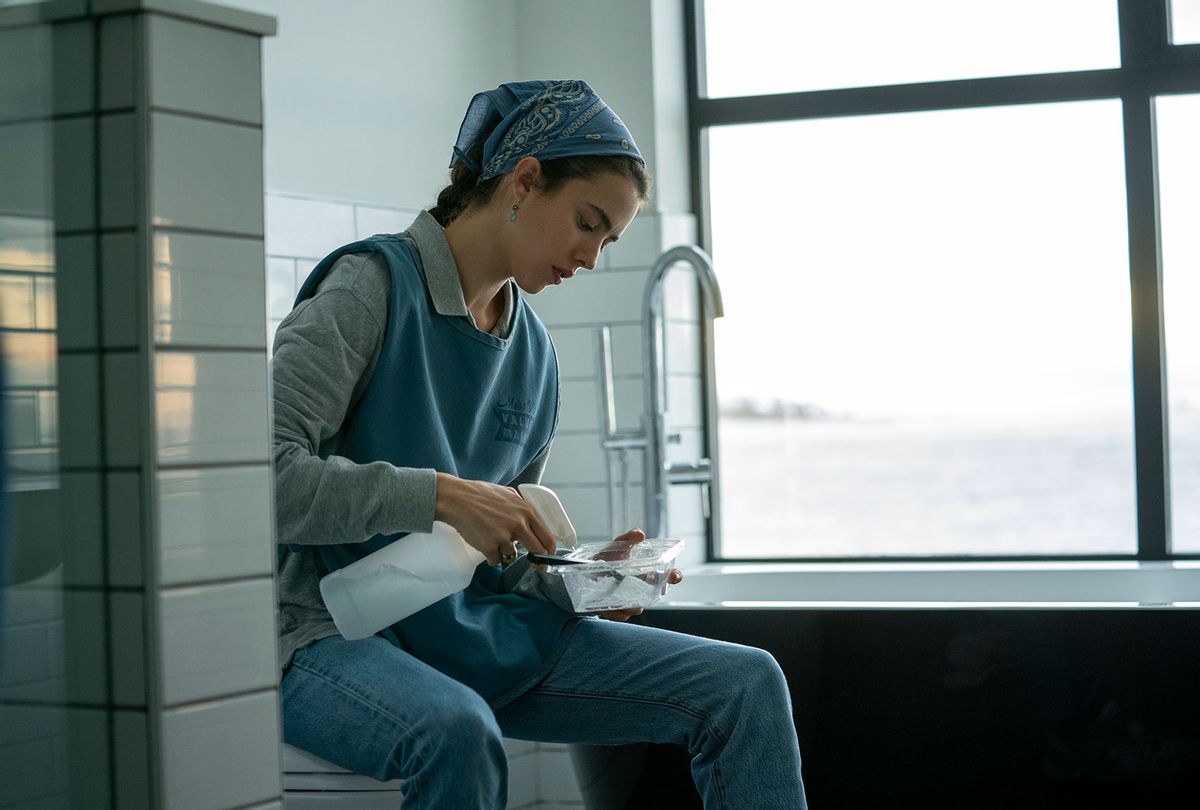 In the first episode of Netflix's adaptation of Stephanie Land's acclaimed stunner "Maid," the protagonist is cleaning the home of an affluent, entitled client. She is tasked with "cleaning out the fridge" in its entirety because the client at hand is going to be in New York City that weekend — so all of the food must go so the couple doesn't come back to a house "smelling like kombucha." Alex begins by throwing out cartons of fresh fruit, a cavalcade of berries going into the immaculate, stainless steel garbage can.

In a sudden switch to a fantasy sequence, Alex begins fervently eating with abandon, ravenously gorging herself on foods that are being discarded: whole layer cakes, whipped cream, fruit, chocolate, a turkey leg. To the aforementioned client, this is excess; it's of no importance and is just going in the garbage.

To Alex, who isn't sure when her next meal might be, this food is sustenance. That kind of deep anxiety is far-reaching and all-consuming. Suddenly, Alex "snaps out of it" and resumes tossing out a surplus of fresh, incredibly edible food. This opening struck me and set the stage for what "Maid" is: a glimpse of the constant day-to-day anxieties, pressures and judgements with which those living in poverty must constantly navigate.

Related: "This is food security for us": How community gardens are persisting through the pandemic

Land captures this dichotomy — voracious hunger and tremendous waste — in aching clarity through the lens of food insecurity. Hunger is an entity that can ravage from the inside out and it's something that many are privileged enough to never experience to such a degree.

"Maid"  traces the life of Alex — played by Margaret Qualley and based on Land's own experiences — as she jumps through hoops, scrapes by, and attempts to navigate the immensely challenging (and frustrating) landscape of government assistance. Throughout it all, she is plagued by a litany of yellow and red tape, bureaucracy and misogyny.

Unfortunately, the events portrayed "Maid" aren't just part of a Netflix series for many Americans.

Millions upon millions of Americans — and people worldwide — struggle to feed themselves and their families, which has only been exacerbated by the pandemic. NPR notes that 2.37 billion people worldwide were food insecure in 2020 alone.

The Conversation defines food insecurity as "the uncertainty of saving, or unable to acquire, enough food due to insufficient money or other resources." City Harvest notes a 38% increase in food insecure New Yorkers over "pre-pandemic figures," while one in three children living in New York City are food insecure — which is a whopping 64% increase.

The Conversation also notes that "SNAP (supplemental nutrition assistance program) recipients are up to 30% less likely to be food insecure than people who are eligible but do not get those benefits."

These are financial requirements in order to "qualify" for SNAP, including overall income, total asset, and other statistics that discern whether or not a family is deemed appropriate to be granted assistance by the program. If met, SNAP recipients receive an "electronic benefit transfer card" which they can then use at some grocery stores, supermarkets and other stores.

However, the use of this program has long been stigmatized, especially because many members of groups who are already marginalized rely on SNAP benefits.

CNN states that "single mothers like the character of Alex have often been demonized for relying on public benefits like child care subsidies and nutritional assistance, especially if they are Black or brown."

The Counter writer Simran Sethi contemplates the difference between hunger and food insecurity, exploring the idea that the statement "I'm hungry" can mean something vastly different when said by one person versus another. Sethi also states that hunger is a "broad and imprecise term" that isn't satisfactory enough to adequately discern the varying levels of hunger, from "easily remedied to utterly all-consuming."

For context, Sethi notes that "during the same year in which 45 of the 50 largest public companies have turned a profit, 40 million more Ameircans have become food-insecure." That dichotomy is like the macro-version of the refrigerator clean-out scene in Netflix's "Maid."

So what can be done? While donating to food banks is also immensely important, especially to keep up with such growing demands throughout the pandemic, Martin Caraher aptly wrote that "the rhetoric of many in government is that food banks and soup kitchens represent the caring face of society."

"But another way of viewing this is that charity provision is a testament of the failure of public authorities to deliver and this should not be seen as a permanent substitute for more robust social programmes," he wrote.

In a piece for TIME, Land herself shares her advice on how to best support.

"We need to look marginalized people in our community in the eye and listen to their stories of struggle, heartache and impossibility," she wrote. "We need to sit with the pain people in systemic poverty and systemic racism experience, especially because those two things go hand in hand."

She's also very pointed in acknowledging her privilege as a college-educated white woman and the fact that her story of escaping poverty via a book deal is in no way common.

Being ensconced in various forms of privilege — a home, hot food, a bed — limits the understanding of the day-to-day minutiae for those who are living in poverty. Land also notes that it's important to ask questions.

"When people ask me how to help, I tell them to ask people what they need," she said. "I'm betting the answers are things like tampons and diapers and $10 for gas, because life is so small and short-sighted when you're that hungry that you can't demand affordable housing and a living wage. That's for all of us who have means to fight for."

More stories about what we watch and what we eat: