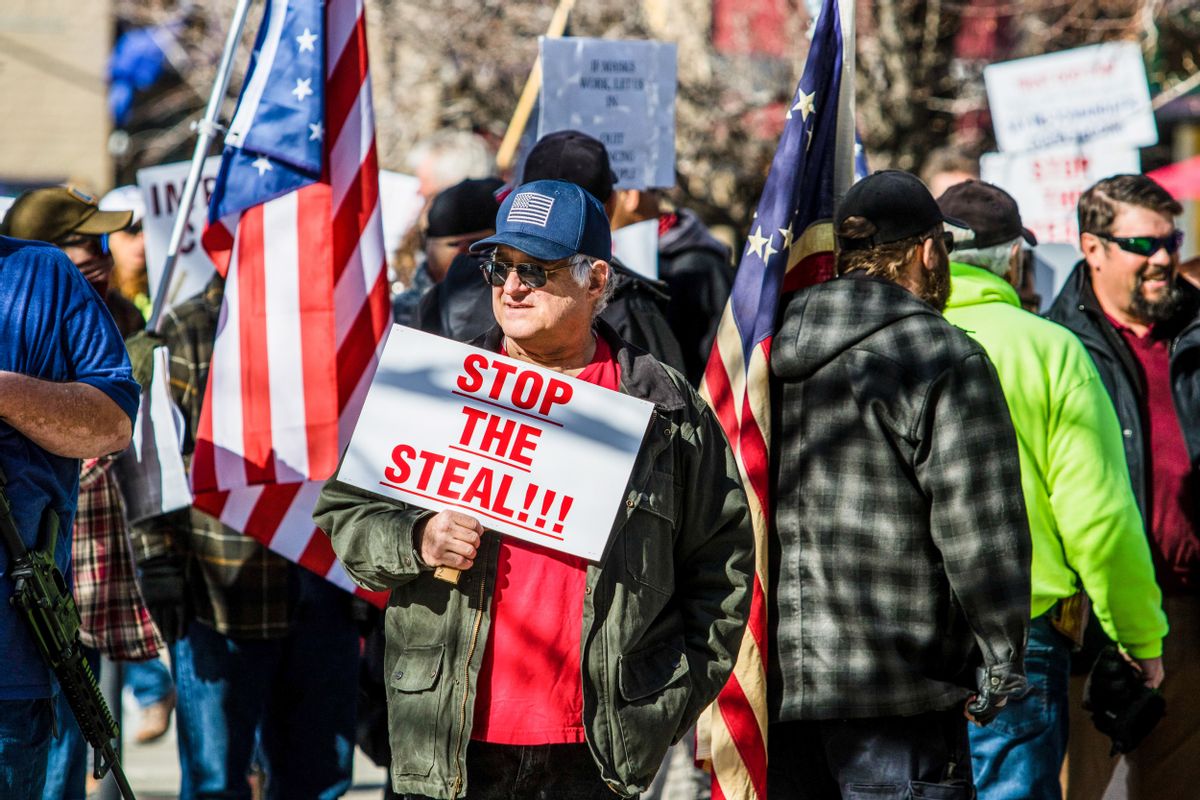 A protestor holds a placard saying Stop the steal during a demonstration in Nevada. (Ty O'Neil/SOPA Images/LightRocket via Getty Images)
--

Secretaries of State and other election officials across the country are speaking out about the alarming increase in harassment and violent threats they've faced since former President Donald Trump's 2020 election loss.

Arizona Secretary of State Katie Hobbs detailed her encounter with "armed protesters" that organized outside of her home. Following Trump's loss, protesters reportedly told Hobbs, "Katie come out and play. We are watching you."

The Democratic official has also received vicious voice-mail. "You will never be safe in Arizona again," an unknown caller warned in one of the messages.

Hobbs also discussed the alarming encounter. "As an elected official, I expected that sometimes I would have constituents who were unhappy with me," Hobbs said. "But I never expected that holding this office would result in far-right trolls threatening my children, threatening my husband's employment at a children's hospital or calling my office saying I deserve to die and asking, 'What is she wearing today, so she'll be easy to get.'"

As Trump continued to push the "big lie," election officials on both sides of the political aisle were faced with harassment. Although the numbers, and even audit outcomes, have made it clear that Trump lost the election by a substantial margin, his followers' blind faith has not waned.

Colorado Secretary of State Jena Griswold has also faced similar treatment. Speaking to CNN last week, she revealed whether or not she felt safe doing her job. The state official took nearly 30 seconds to speak.

"I take these threats very seriously," she said after carefully choosing her words. "It's absolutely getting worse."

"When I'm at the center of a national QAnon conspiracy and the very people who have stormed the Capitol are threatening me, it is very concerning," Griswold said. "When someone says they know where I live and I should be afraid for my life, I take that as a threat and I believe the state of Colorado should, too."

The latest concerns also come months after Gabriel Sterling, the top-ranking Republican for Georgia's voting system, also echoed similar sentiments about accountability during a Dec. 1, 2020 news conference last year. At that time, Georgia Secretary of State Brad Raffensperger was being targeted amid pressures to overturn the election results in his state.

For Michigan Secretary of State Joycelyn Benson, it's become a way of life to live with looming threats. "It creates an air of apprehension everywhere you go and over everything you do. You're always looking behind your back and over your shoulder," she said.

"The lack of accountability means one thing: we have to anticipate that it will continue," Benson said. "And then as we close in on next year's election and 2024, I think it will simply continue to escalate, unless there are real consequences."