Fighting to preserve Trump's legacy: Manchin and Sinema cement his only legislative achievement 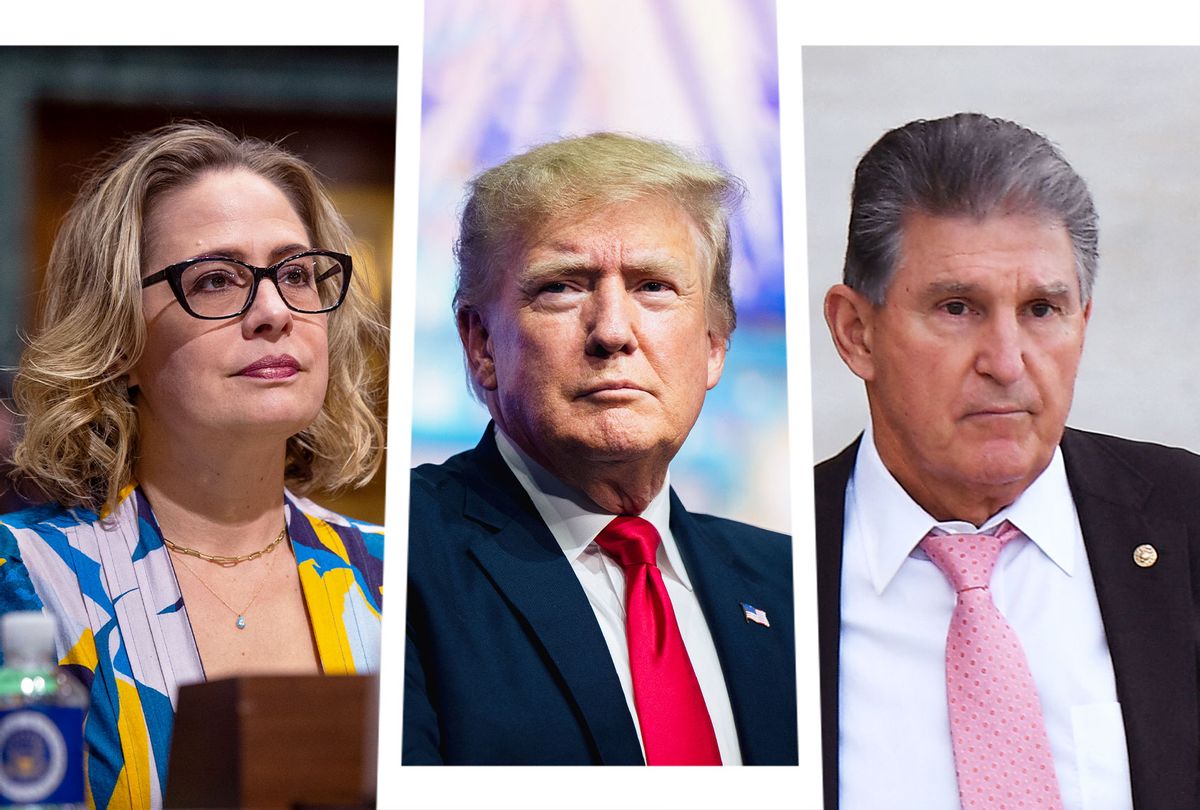 Joe Biden was scheduled to fly off to the United Nations Climate Change conference on Thursday morning but delayed the trip long enough to go up to Capitol Hill to tell the House Democrats that an agreement had been reached on a "framework" for his big Build Back Better bill. He told Democrats on the Hill, "I don't think it's hyperbole to say that the House and Senate majorities and my Presidency will be determined by what happens in the next week." No pressure there. But he's right. You would think they already know that, but apparently, it had to be said.

Biden reportedly got a standing ovation from the caucus and he no doubt got on Air Force One feeling very optimistic that his pitch of a 1.75 trillion dollar "framework" had been accepted and the legislation would be waiting on his desk when he returned. The deal was immediately hailed as a major achievement with people such as Secretary of the Treasury Janet Yellen saying, "any one of the proposals contained in this framework — childcare, climate change investments, universal pre-K — would be a remarkable achievement, but together, they represent something truly historic: a new period of investment in economic growth for all Americans across the country." Former President Barack Obama weighed in with some sage words about the process, tweeting, "in a country as large and diverse as ours, progress can often feel frustrating and slow, with small victories accompanied by frequent setbacks. But once in a while, it's still possible to take a giant leap forward. That's what the Build Back Better framework represents."

Unfortunately, it appears that the president should have also made a stopover at the Senate to ensure that the two Senate prima donnas, Kyrsten Sinema of Arizona and Joe Manchin of West Virginia, both Democrats, were still on board.

Air Force One hadn't even left the tarmac before both Sinema and Manchin issued vague, non-committal statements implying they hadn't signed on to the framework at all. As usual, they didn't really spell out any objections, just imperiously threw their weight around. If one didn't know better one might think they are just obstructing for the sheer joy of driving everyone crazy.

That is not to say they aren't highly regarded among their peers for what they are doing:

No doubt Mitch McConnell toasted both Sinema and Manchin with a fine Kentucky bourbon as well. The more this continues, the greater his chances of being back in the chief obstructionist office come 2023.

After it became clear that the Diva twins were still preening, the House progressives naturally felt a little bit stung. The "framework" is obviously still up in the air and until those two say they agree, progressives in the House are not going to vote for the infrastructure bill that's already passed the Senate. It's all they've got to ensure Manchin or Sinema don't wake up on the wrong side of the bed and decide to blow up the whole thing. And even with that, it's unclear whether either of them care about passing anything (Manchin was reported to have told Senate Budget Committee Chairman Bernie Sanders that he would be "comfortable" with zero spending so ...)

Pelosi asked House progressives not to embarrass the president by refusing to vote for the infrastructure bill while he is overseas on an important trip and his credibility with foreign leaders is on the line. It's hard, however, for him to claim that America is operating normally and he will deliver on his promises when two recalcitrant members of his own party are destroying his domestic agenda. The progressives weren't moved, and Pelosi had to delay the vote until next week.

It's not the end of the world, however.

There does seem to have been substantial progress and they are all going to spend the next few days looking at the details of the framework that is finally being presented. No doubt there will be many questions and complaints but there will at least be something concrete to argue about. Basically, what we are seeing are which remnants of the original proposal are left after the two high-handed senators cut out whatever they didn't like for reasons that we may never fully understand.

The two senators nixed the tax increases on the wealthy, for instance. Manchin couldn't even go along with taxing billionaires because it's not fair to demonize such wonderful "job creators." Biden's proposed capital gains tax and end to stepped-up basis are gone as well and they won't even be allowed to bolster the IRS so that it can crackdown on tax cheats. I guess they're job creators too. In fact, Donald Trump's only legislative achievement will have been secured by the Democrats — his massive tax cuts for the rich will pretty much remain intact. No doubt McConnell raised a glass of that sweet Kentucky bourbon over that as well.

The saddest and most foolish of all, from both a policy and a political standpoint, is the jettisoning of paid family leave, Medicare benefits expansion and negotiating prescription drug prices, a promise the Democrats have failed to deliver since they ran and won the majority on that issue back in 2006. These are programs with constituencies that will fight to retain those benefits when the Republicans try to repeal them in the future. What a missed political opportunity. And what a shame that the American people will be denied such vital necessities in order to salve the egos of two Senators.

There are some very good things in what's left in the bill, however:

When you add that on to the 1.9 trillion in the American Rescue Plan and the big infrastructure plan, you are looking at a successful progressive agenda under quite difficult circumstances. That's if they manage to pass it.

The good news is that the players seem to be more upbeat about the possibility than I've seen for some time. Hawaii Senator Brian Schatz tweeted this at the end of the day on Thursday:

When asked why he felt that, he said he couldn't reveal it. Let's hope that optimism isn't misplaced. It's time to get it done.