"We should just pass the infrastructure bill and, you know, pause for six months," Manchin reportedly said Thursday 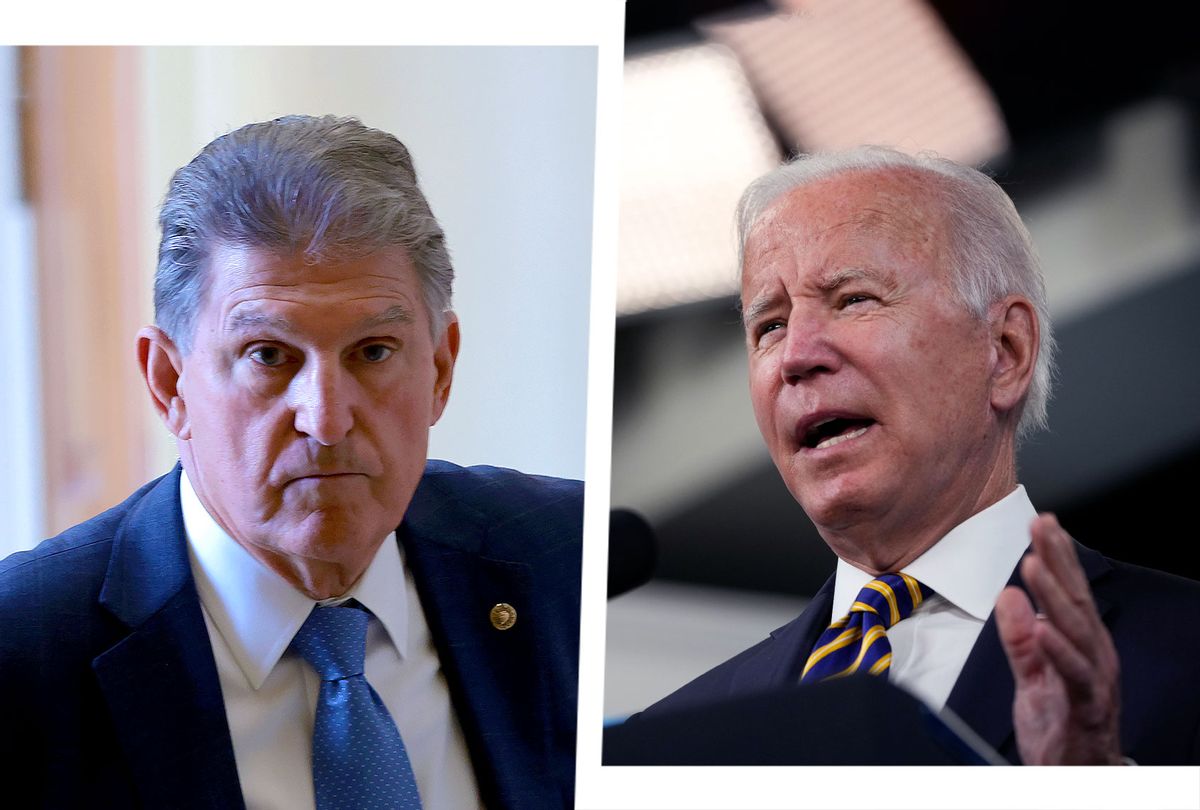 After making a series of demands that the White House cut back on President Joe Biden's ambitious domestic agenda, West Virginia Sen. Joe Manchin, a Democrat, reportedly admitted to his Senate colleagues that he actually wants to scuttle the president's entire plan.

According to a report from Axios, Manchin revealed his position at a Wednesday lunch for Senate committee chairs.

Sanders, the Senate Budget Committee chair, has publicly taken Manchin to task, writing an op-ed blasting the conservative Democrat in a West Virginia newspaper over the weekend.

According to Deleware Sen. Chris Coons, a moderate and close Biden ally, Manchin went so far as to argue against the long-negotiated reconciliation package.

"We shouldn't do it at all," Manchin reportedly said of the domestic spending bill. "This will contribute to inflation. We've already passed the American Rescue Plan. We should just pass the infrastructure bill and, you know, pause for six months."

On Thursday, Manchin told reporters that he doesn't seem himself striking a deal with his caucus or the White House "anytime soon."

According to another Axios report this week, the West Virginia lawmaker is demanding a "firm work requirement" for the popular child tax credit and a "family income cap in the $60,000 range," effectively rendering the provision means-tested.

The condition, which would make the credit drastically less accessible, is reportedly expected to bring down the bill's price tag – a months-long sticking point between Senate Democrats and Republicans. The program is estimated to cost $1.6 trillion over 10 years, according to Axios.

Last month, Manchin insisted that the child tax credit must go only to those who really need it, telling reporters: "I want work requirements for everything. Means testing and work requirements."

During a CNN interview, the conservative Democratic similarly told CNN's Dana Bash that he wanted to "make sure we're getting [the credit] to the right people."

The child tax credit, first introduced in 1998, was widely expanded by President Biden as part of his "American Rescue Plan" back in March, increasing the annual provision from $2,000 to $3,600 at a maximum per child. Under Biden's plan, single-parent families who made up to $112,500 and two-parent families who made up to $150,000 were eligible for the credit. However, Manchin's plan would effectively exclude any families making more than $60,000 per year.

According to a Columbia University study from August, the first child tax credit payment under the American Rescue plan lifted about 3 million children out of poverty. Columbia's Center on Poverty and Social Policy also found last week that Biden's tax credit has "statistically insignificant impacts" on employment, Insider noted.

Other items in Biden's "human infrastructure" agenda have either seen indifference or approval from Manchin, according to Axios. The senator is reportedly "open" to Biden's $450 billion provision designed to subsidize day care and free universal pre-K. Manchin is also apparently "less interested" in reworking Biden's $225 billion to $450 billion paid family leave proposal or the president's $400 billion provision dedicated to care for elderly and disabled people.

Over the past several weeks, Manchin, long a deficit hawk, has suggested many ways for the White house to scale back the president's reconciliation bill – which needs the support of all 50 Democratic senators in order to reach Biden's desk.

Last Friday, The New York Times reported that the bill's clean energy program was officially scrapped due to opposition from Manchin, who has strong financial ties to oil and natural gas energy. Experts told the Times that the provision – which sets out to reward utilities for switching to renewables – would have been "the strongest climate change policy ever enacted by the United States."

Last month, Manchin similarly demanded the reconciliation also include the Hyde Amendment, which bars abortion coverage for people enrolled in Medicaid & Medicare, saying that the measure is "dead on arrival if that's gone" from the text. However top Democrats and progressive have been recalcitrant on the amendment, insisting that it will remain absent from the bill.