Sourdough cider doughnuts put everyone in the fall spirit

Our favorite fall sweet, with a naturally leavened twist 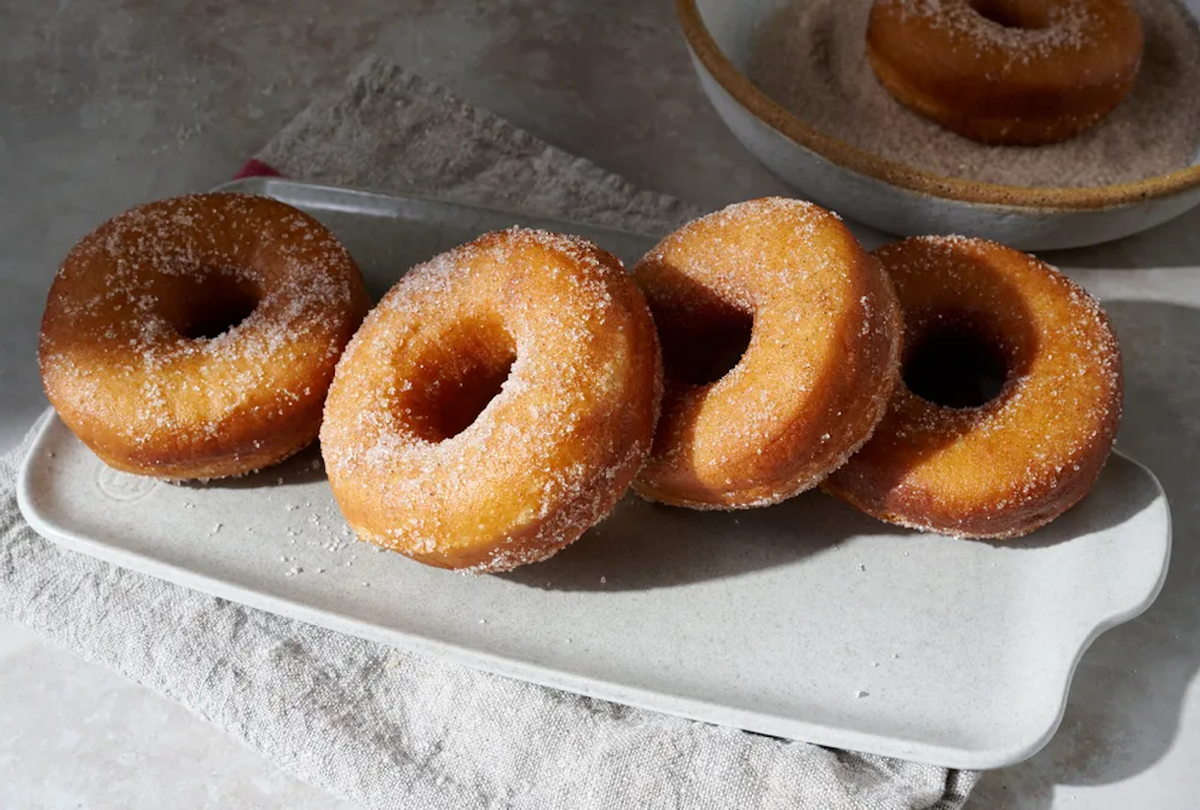 The Perfect Loaf is a column from software engineer turned bread expert (and Food52's Resident Bread Baker) Maurizio Leo. Maurizio is here to show us all things naturally leavened, enriched, yeast-risen, you name it — basically, every vehicle to slather a lot of butter on. Today, he's discussing how to make one of fall's finest apple cider doughnuts.

As a kid, I remember my grandfather would wake up every morning at 5 a.m. sharp. His destination was always the same: a local doughnut shop for a single glazed doughnut and a cup of piping-hot black coffee. I'd sometimes wake at the same time and wonder what the draw was. I mean, sure, doughnuts are great, but that's just too early for anything. Now that I'm older, I realize the ritual of something sweet in the morning with your coffee makes for a beautiful way to get the day started. Your whole day is already filled with tasks and chores and meetings, but that bit of time in the morning is sacred, and a fabulous doughnut in hand makes it doubly so.

If you have a bubbling sourdough starter on your counter ready to go, everything you need to make light, fluffy, and delicious doughnuts is within your reach. Plus, it makes waking a little earlier each morning much easier.

While I don't eat doughnuts as often as my grandfather, when I do, I like to make them by hand. Italian-style bomboloni are without a doubt my favorite — in their simplicity (just fried, enriched dough!) is their undeniable charm. Sure, the steps are lengthy, but most of the time you're not doing much, just letting your starter transform the dough into something incredibly flavorful and leaven them into glorious puffy clouds. But why sourdough, versus something like instant yeast or chemical leavening like baking soda or powder, you ask?

First, baking soda and baking powder make an utterly different doughnut than sourdough does. These are your typical cakey doughnuts, which are a little denser and thicker than yeasted doughnuts, though no less delicious. Second, a yeasted or sourdough doughnut necessitates longer fermentation times for proper leavening. All of this means a lighter, fluffier result, and in the case of sourdough doughnuts, lighter and more flavor.

Flavor means many things to different people, but for me, and especially with sourdough, I like a little tang, even in sweets. The slight sourness cuts through the sugar to temper the whole thing into a more palatable and enjoyable breakfast — some doughnuts are essentially dessert, so sweet you need a nap and large coffee to remain functional.

When tangy isn't too tangy

Like most people, I enjoy sweets, but I'm someone who doesn't like it when things go too far — you'll see me reach for a peanut butter cup before candy corn any day. Thankfully, with the slight acidity brought on through natural leavening, the sweetness of the sourdough doughnuts gets somewhat curbed.

The acids created as a by-product of sourdough fermentation are unavoidable. In almost every case, they're something you're looking for — not for mouth-puckeringly sour loaves, but for flavor. It's what makes your taste buds dance when you take a bite of long-fermented bread; it's not something we want to suppress. But in sweet applications, like sourdough apple cider doughnuts, we want to reduce the overall acidity as much as possible, but still have a little peek through at the end of each bite.

Using cider, the core ingredient of which is simply apple juice, as the majority liquid in sourdough apple cider donuts brings a unique apple flavor to the doughnuts, and the included spices, which are typically a mixture of cinnamon, nutmeg, and allspice, add even more flavor. Of course, apple juice is naturally sweet, so you get a boost to the overall sweetness of the doughnut when using it as well. If you're not in the mood for apple-anything this fall, these doughnuts would be great using water instead of the spiced drink (and I'd also leave out the spices in the dough as well). Leaving out the cider will result in a less-sweet doughnut, but when dunked in a cinnamon-sugar topping, it'll be plenty indulgent.

Speaking of the dough, what's the best way to handle an enriched doughnut dough to make rolling and cutting easier? Use the refrigerator! Our microbial friends in sourdough starter work just fine after the dough has been in the cold, even for 12 hours.

With enriched dough that needs rolling, I typically place the dough after bulk fermentation into the fridge overnight. The next day, it's straightforward to roll out and punch a thoroughly chilled dough. And this is important for doughnuts, which require rolling out and two sets of holes punched for each. Working with cold dough makes this a nonissue.

Which oil for frying?

When it comes to frying, I've tried several frying oils over the years, from canola to vegetable to refined coconut oil. My preference is refined coconut oil, which is solid at cool room temperature. This means when you finish frying your doughnuts, and they've cooled, the doughnut holds its shape well and even becomes a little crispy. They seem to taste fresher for longer, avoiding the soggy fate of most days-old doughnuts. The downside to refined coconut oil is its availability: While you can find it at some supermarkets, for large quantities I generally have to order this online in buckets.

For me, second to refined coconut oil is canola, which I find fries dough efficiently and leaves less of that fast-food-reminiscent aroma floating about in the kitchen than other oils, such as vegetable oil. In the end, choose the one that's most accessible and budget-friendly — all will give you a glorious doughnut-centric breakfast.