These horror movie foods are supposed to be gross... but look delicious!

Sometimes a bubbling witch's cauldron is ominous. Sometimes it looks like it would hit the spot 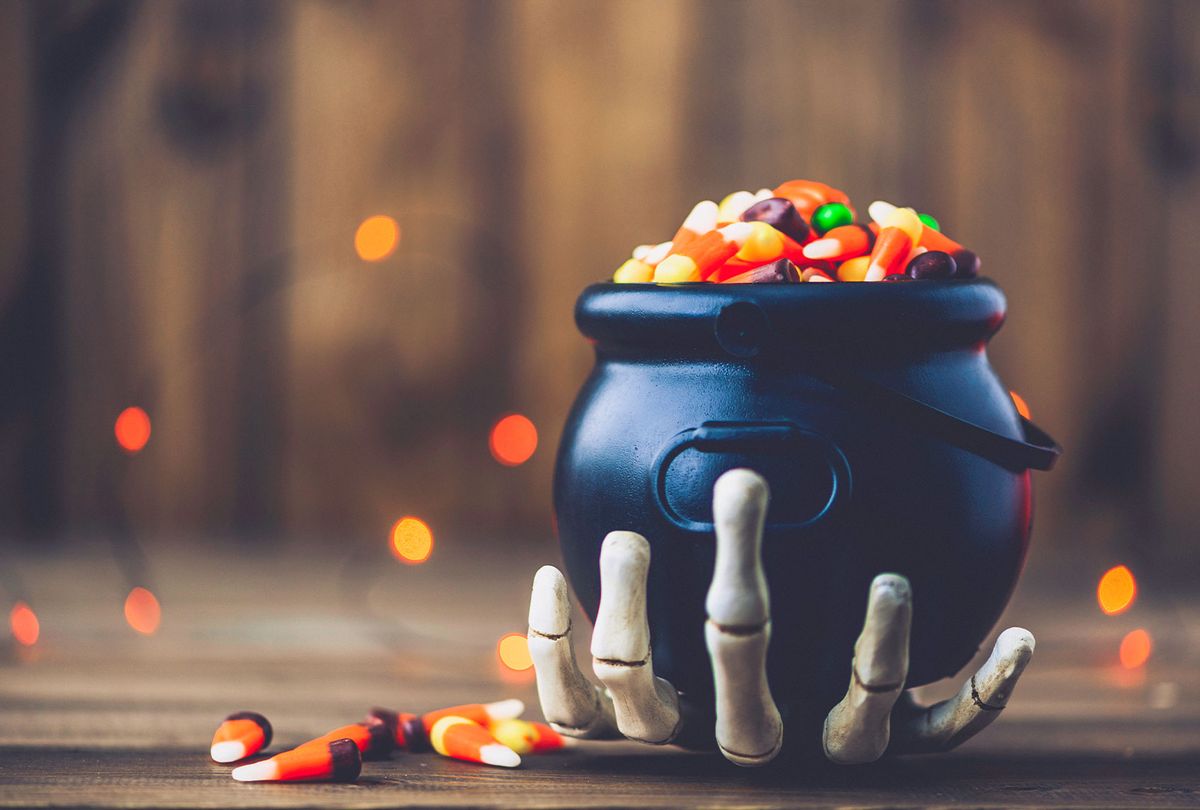 I didn't want to admit it, but I was inspired to write this article because of a meal prepared by a Latrine.

In Mel Brooks' classic spoof "Robin Hood: Men in Tights" (my second favorite Brooks movie, followed only by "History of the World, Part 1"), a hideous witch named Latrine (Tracey Ullman) decides to make a magic omelette for King John (Richard Lewis) so he can defeat Robin Hood (Cary Elwes). The devilish breakfast includes raven's egg, blood of a hen, eyeballs of a crocodile and testicles of a newt; since this is a comedy, shtick is spouted while the stomach-churning concoction is put together. Yet when Latrine actually presents the meal to King John, the final product looks... honestly, not too bad.

If it hadn't been for the courage of a Twitter user who goes by "Bashmore," I would never have publicly admitted this. Last month I asked people on the platform about supposedly gross foods they'd seen in movies which actually look delicious. In my post, I alluded to how "witches' potions in bubbling cauldrons look like tasty chunky soup," which I absolutely believe to be the case. The key to being able to crave cinema's disgusting offerings is to see the potentially edible mixed in with the ostensibly inedible. As Bashmore said regarding Latrine's omelette, "it has an eyeball and half a shell, but pick around those bits and it looks quite nice."

A similar point could be made of the tauntaun guts, which were brutally exposed by Han Solo (Harrison Ford) in "The Empire Strikes Back" so that his friend Luke Skywalker (Mark Hamill) wouldn't die in the cold. When Solo swings his lightsaber into the dead reptomammal's flesh so he can stuff his shivering companion inside, the goo that pours out looks a bit like translucent white sausages. As Twitter user Gwydion pointed out, "when Han Solo slices open Luke's Tauntaun, I always thought the Tauntaun guts looked kinda tasty." In the "Star Wars" universe, this is a dumb beast that smells even worse on the inside than it does on its outside. Back on this planet, though, those merely look like potentially tasty plump sausages. They might need a little seasoning, given the lack of color, but otherwise they seem potentially delightful.

If you're able to check your morals at the door, you could even be convinced to feel that way about the memorable pizza in "A Nightmare on Elm Street 4: The Dream Master." It is covered in cheese, what seem to be strips of pepperoni, and the most succulent little meatballs. True, when dream demon Freddy Krueger (Robert Englund) pops them in his mouth, we can tell that those meatballs are actually the shrieking tormented souls of hapless teenage murder victims. If you can simply set aside that inconvenient detail, though, is it possible to not at least be impressed that this pizza joint didn't skimp on the toppings?

This facetious query, though, raises a somewhat more serious question. Does this mean that, behind the world of cinematic gross foods, there is a universe of real-life culinary delights?

Alas, sometimes you'll be disappointed when you try to learn the truth behind the silver screen's seemingly repulsive snacks. In the introduction of "Jason Goes To Hell: The Final Friday," a coroner (Richard Gant) is possessed by slasher killer Jason Voorhees (Kane Hodder) after the dead murderer's heart hypnotizes him into, well, an act of cannibalism. As he chows down on Jason's inflamed and diseased heart, black sludge gushing from his maw, I couldn't help but note that the heart looked like candy. As it turns out, I was correct: The prop designers made the prop out of gelatin and filled it with fruit cocktail and black food dye to create an oozing effect. Despite its mundane origins, however, Gant reportedly still felt nauseous by the disgusting thing, and nearly vomited during the take as a result.

I suppose the underlying lesson here is that, because movie gross foods are fictional, it is healthy and normal to project mundane gustatory preferences onto them. Perhaps if we had an opportunity to eat props like Jason's heart or one of Freddy's victim's souls, we would not be able to suspend our disbelief and really think we were doing something gross. Then again, perhaps we would convince ourselves that we really are eating a sweet piece of candy or juicy meatball, and won't be grossed out at all.

Either way, I'm not longer ashamed to say that I think Latrine's omelette looks pretty good. Just don't serve me an omelette from an actual latrine!