Cori Bush pushes back on Joe Manchin's demands: "I do not trust his assessment"

"Joe Manchin's opposition to the Build Back Better Act is anti-Black, anti-child, anti-woman, and anti-immigrant" 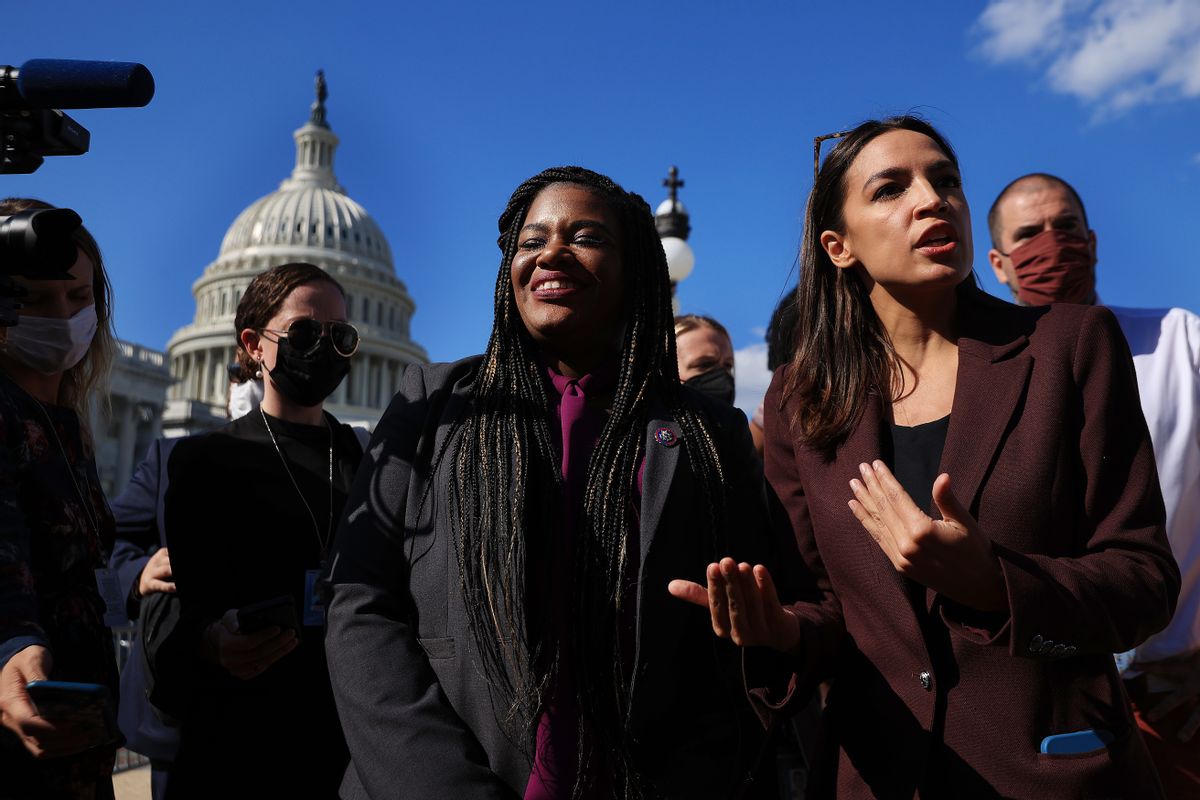 Congresswoman Cori Bush of Missouri blasted Sen. Joe Manchin on Monday for once again threatening to tank the Build Back Better Act, a safety net and climate proposal that the West Virginia lawmaker and other corporate Democrats have already watered down by removing key provisions and slashing funding for the remaining programs.

"We cannot leave anyone behind. Senator Manchin must support the Build Back Better Act."

"Joe Manchin does not get to dictate the future of our country," Bush said in a statement Monday evening after Manchin—a necessary swing vote in the evenly split U.S. Senate—publicly refused to support the latest iteration of Democrats' reconciliation package, whose top-line was cut from $3.5 trillion over 10 years to $1.75 trillion in an effort to appease a small group of conservatives.

"I do not trust his assessment of what our communities need the most," the Missouri Democrat continued. "I trust the parents in my district who can't get to their shift without childcare. I trust the scientists who have shown us what our future will look like if we fail to meaningfully address the climate crisis. I trust the patients and doctors crying out for comprehensive health coverage for every person in America."

During a press conference on Monday, Manchin insisted that the House approve a Senate-passed $550 billion bipartisan infrastructure package before moving ahead with the broader reconciliation bill, which has the backing of a strong majority of Democrats in Congress and the party's voters.

"I'm open to supporting a final bill that helps move our country forward," Manchin said of the reconciliation package, "but I am equally open to voting against a bill that hurts our country and the American people."

In response to Manchin, Bush argued that the bipartisan measure "overwhelmingly" excludes vulnerable communities, echoing the longstanding progressive critique of legislation that the West Virginia Democrat—a fossil fuel industry ally and coal profiteer—helped craft. For months, members of the Congressional Progressive Caucus (CPC) have said they are willing to vote for the bipartisan package only if the Build Back Better Act is advanced simultaneously.

"We cannot spend the next year saying, 'The House did its part, and now it's the Senate's turn.' We need the Senate to actually get this done," Bush, the CPC's deputy whip, said Monday. "Joe Manchin's opposition to the Build Back Better Act is anti-Black, anti-child, anti-woman, and anti-immigrant. When we talk about transformative change, we are talking about a bill that will benefit Black, brown, and Indigenous communities."

"We cannot leave anyone behind," she added. "Senator Manchin must support the Build Back Better Act."

Despite Manchin's comments on Monday, progressive leaders expressed confidence that the Build Back Better Act remains on track for a vote as lawmakers race to iron out final details, including a prescription drug plan that was axed from the updated reconciliation framework unveiled last week.

CPC chair Rep. Pramila Jayapal (D-Wash.) told reporters Monday that her caucus is prepared for a vote on the Build Back Better Act and the bipartisan infrastructure bill as soon as this week even if Manchin and Sen. Kyrsten Sinema (D-Ariz.)—another key Democratic holdout—don't publicly vow to support the reconciliation package.

"We are going to do our work in the House and let the Senate do its work," Jayapal said. "But we're tired of, you know, just continuing to wait for one or two people."

Rep. Ilhan Omar (D-Minn.), the CPC whip, told The Intercept's Ryan Grim Monday that "it's time to call [Manchin's] bluff" by pushing the reconciliation measure and the bipartisan bill through the House.

Given that progressives previously insisted that the Senate approve the reconciliation package before a House vote on the bipartisan bill, Omar and Jayapal's latest comments were viewed as an indication that the CPC is changing course after months of negotiations.

"These bills will pass the House and everyone will get to see if Manchin is willing to vote it down," Omar said Monday. "It is also time to see if the president [can] get his friend on board and get the votes for his agenda."