The perfect pairing for turkey? One of these little numbers 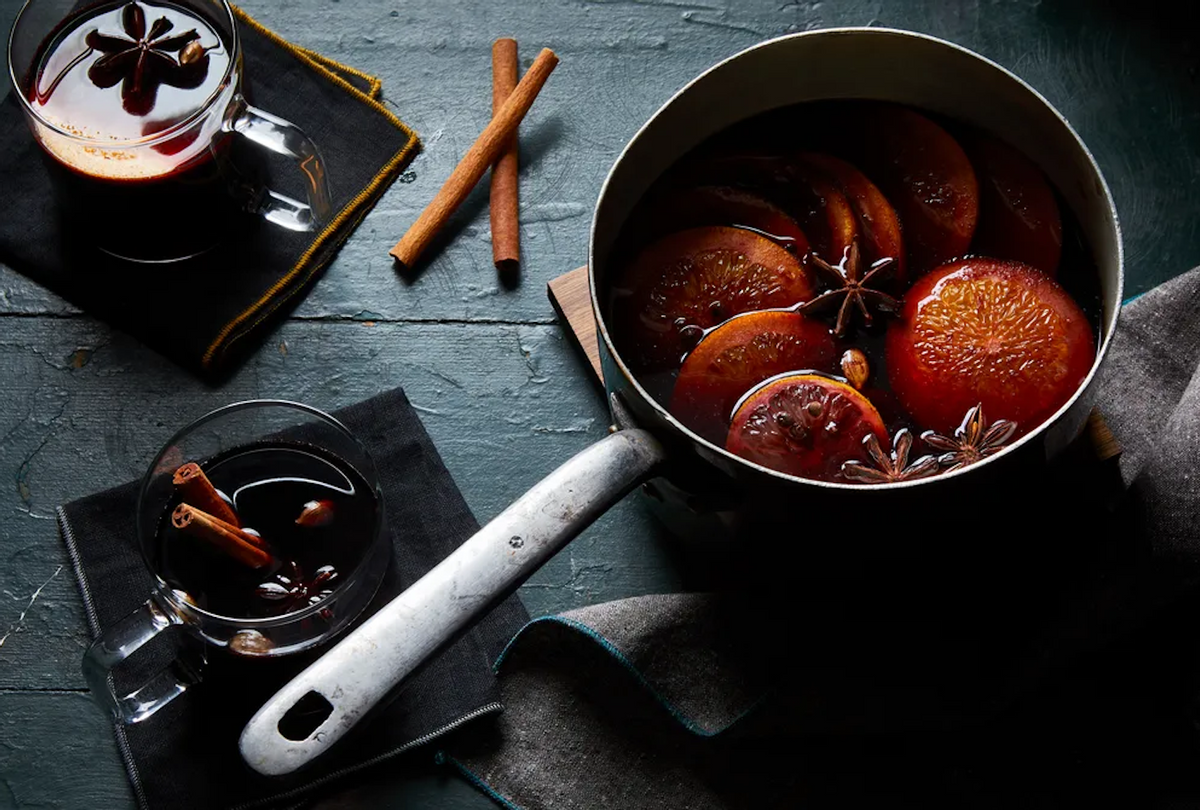 When you're planning your Thanksgiving menu, you're sure to get the basics — the turkey, of course. Something like mashed potatoes, a couple of green vegetables, sweet potatoes, perhaps with marshmallows or a brown sugar crumble, a crisp salad, and at least a few types of pie. You'll probably also give some thought to drinks, both alcoholic and not. A couple varieties of whites and red (may we recommend a white bordeaux, unoaked chardonnay, and Pinot Noir) come to mind. But what about cocktails? Whether you want to make one big-batch punch or sangria that everyone can enjoy, or are ready to unleash your inner mixologist and offer a few signature cocktails for the feast, these Thanksgiving cocktail recipes are the menu upgrade you've been waiting for.

Grab a gallon of apple cider and get ready to make the most autumnal cocktail your bar cart has ever seen. You boil down the cider into a thickened syrup and then mixed with rye whiskey over ice and garnished with a cinnamon stick.

Two cold weather favorites join forces for one warm and cozy cocktail. If you want to go all out, make your own cider too (we'll tell you how!).

It only takes four ingredients — bourbon, Amaro Nonino, Aperol, and lemon juice — and less than five minutes to make this Thanksgiving cocktail, which comes from New York's Little Branch, an underground cocktail bar.

There's no better celebratory cocktail for Thanksgiving than mulled wine . . . make that sparklingmulled wine. A combination of prosecco and red wine will join hands for your festive fête.

St. George spiced pear liqueur and bourbon are the ultimate duo for an earthy Thanksgiving cocktail. Barkeep, make it a double!

You're probably familiar with the uber-chic French 75 (champagne, gin, simple syrup, and lemon). This twist on the elegant classic cocktail introduces an earthy wine syrup and a trio of citrus fruit for a drink that will pair well with a classic roast turkey or cornbread stuffing.

"This drink is inspired by my time living in Seattle," says bar director Natasha David. "Washington state is of course well known for all of its beautiful apples," she adds, so it's no surprise that they're the star of this margarita.

When you picture the perfect Thanksgiving cocktail, what flavors come to mind? Apple cider, probably some warm spices like cinnamon and nutmeg, and maybe bourbon or rye, right? Lucky for you, this recipe has it all.

"Scotch is often an acquired taste. The peat-smudged smoke can be too intense for some people. However, the hint of apple and elderflower in this drink sweetens the smokiness just enough to appeal to a broader range of palates," writes recipe developer Greg Henry.

The beauty of sangria is that you can really make it your own. Choose your favorite type of red wine (though this probably isn't the time to use a robust vintage Bordeaux), a few autumnal fruits (John deBary chose apples, oranges, and luxardo cherries), and something bubbly like sparkling water or prosecco.

Homemade pecan and tea orgeat (made from black tea, pecans, and vodka) turn an otherwise classic lime margarita into a complementary cocktail for your Thanksgiving feast.

Whiskey lemonade is on constant rotation throughout summer but it also works so well as a Thanksgiving cocktail, thanks to the bright citrus notes that offset so many savory flavors on the dinner table.

"I spent most of the fall playing with cranberry, pumpkin, pears, and figs in gin cocktails. This one is one of my favorites, combining muddled figs with a hit of maple syrup, tart lime, and spicy ginger beer, all circling around the complex flavors of gin," writes recipe developer fiveandspice.

Want to get a head start on prepping for Thanksgiving? Make the pomegranate-cinnamon syrup up to two weeks in advance so that all you have to do on Turkey Day is shake it with bourbon, lime and grapefruit juice, and a couple of dashes of bitters.

Our editors call this warm-and-cozy whiskey cocktail just right for sipping curled up next to a fire, as snow gently falls outside your window all winter long.

Campari and blood orange juice seem like the makings of the perfect summer cocktail, but when paired with hard apple cider, it's suddenly just right for Thanksgiving too.

If we have to choose just one liquor to rely on throughout autumn, it would be applejack whiskey.

Rye whiskey is the quintessential fall liquor. Sorry, but I don't make the rules. A little bit of lemon syrup, simple syrup, and red wine are mixed with the rye for easy Thanksgivin' drinkin'.

When you're looking for a big-batch, crowd-ready cocktail for Thanksgiving, red mulled wine is here to save the day. Cinnamon sticks, star anise, ground cloves, and fresh orange zest add just the right amount of sugar, spice, and everything nice.