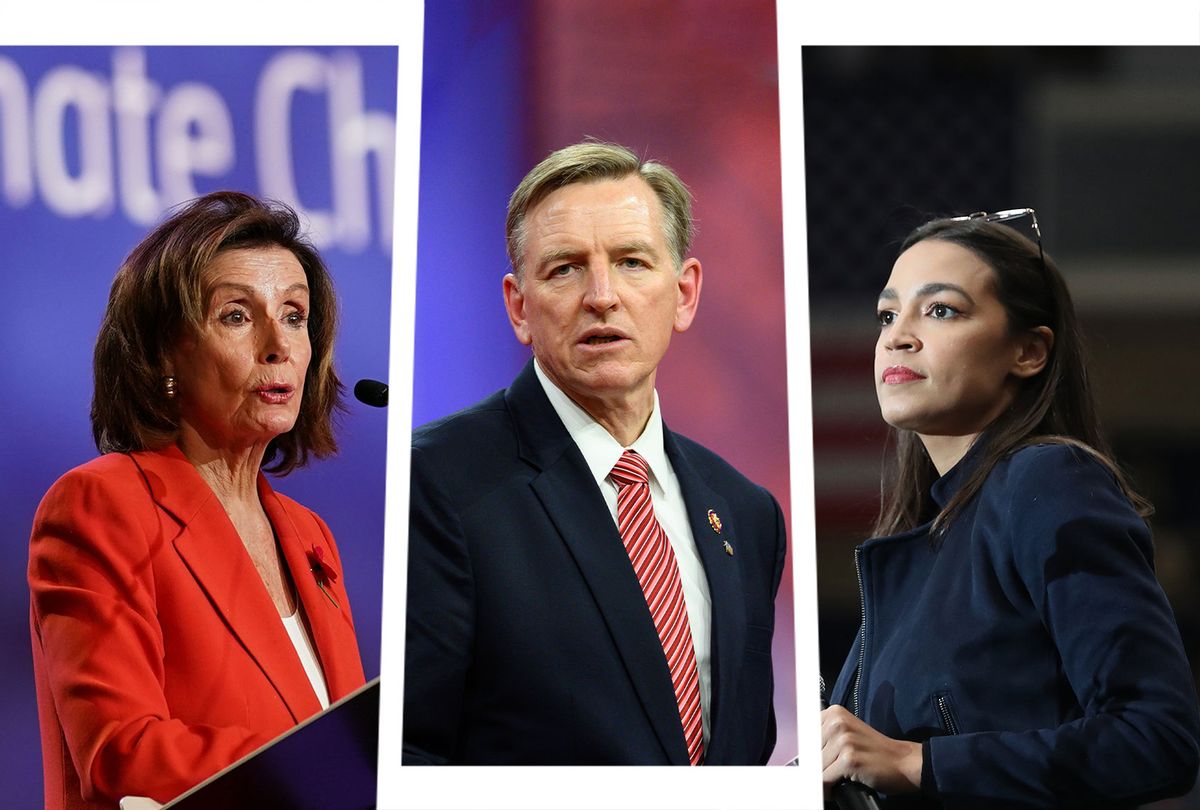 Rep. Paul Gosar., R-Ariz., the fervent pro-Trump dentist who has refused to disassociate himself from multiple white nationalist groups, now faces calls for investigation over his recent release of a crude anime-style video in which a fantasy version of himself kills Rep. Alexandria Ocasio-Cortez, D-N.Y.

"Threats of violence against Members of Congress and the President of the United States must not be tolerated," the top House Democrat tweeted.

"In any other job in America, if a coworker made a video killing another coworker, that person would be fired," the four members wrote. "Mr. McCarthy needs to decide whether he will finally stand with the American people on the side of law and order or he will continue to support violence and chaos."

The video, released on Sunday, pulls clips from the Japanese manga series "Attack on the Titan." In his video, Gosar puts a xenophobic twist on his mashup by retitling the video "Attack of Immigrants," alternates between the show's interstitials and real-world footage of border-patrol agents corralling immigrants as they attempt to cross the U.S.-Mexico border.

At one point, the video shows the main character scaling a European-style urban landscape with Gosar's face photoshopped atop his, alongside images of Rep. Marjorie Taylor Greene, R-Ga., and Lauren Boebert, R-Colo. — two of Gosar's closest far-right allies in the House. Toward the end of the clip, the animated Gosar slays a "titan," the nemesis of the Japanese show, crudely rendered as Ocasio-Cortez.

In response to the video, Ocasio-Cortez tweeted: "a creepy member I work with who fundraises for Neo-Nazi groups shared a fantasy video of him killing me."

"And he'll face no consequences," she added, "bc @GOPLeader cheers him on with excuses."

Gosar, first elected to the House in 2010, is an ardent Trump supporter who has become notorious for his apparent connections to white nationalist and anti-government groups and his unapologetic defense of the Jan. 6 insurrection.

In February, the Arizona lawmaker attended and spoke at the America First Political Action Conference, a white nationalist event, later posing in a picture alongside overt white supremacist Nick Fuentes, a key figure at the 2017 "Unite the Right" rally in Charlottesville, Virginia, who has become unofficial leader of the "groyper" movement.

In October, Gosar was implicated in planning the "Stop the Steal" rally that preceded the Capitol assault last January, with two organizers reportedly telling Congress that Gosar promised "blanket immunity" to protesters in the event of federal prosecution.

"I was just going over the list of pardons and we just wanted to tell you guys how much we appreciate all the hard work you've been doing," Gosar allegedly told the organizers.

In a March interview with Salon, all three of Gosar's siblings expressed their belief that the Republican congressman is a white supremacist and should be expelled from the House.