An insane week of activity in D.C. — and one that may define Joe Biden's legacy 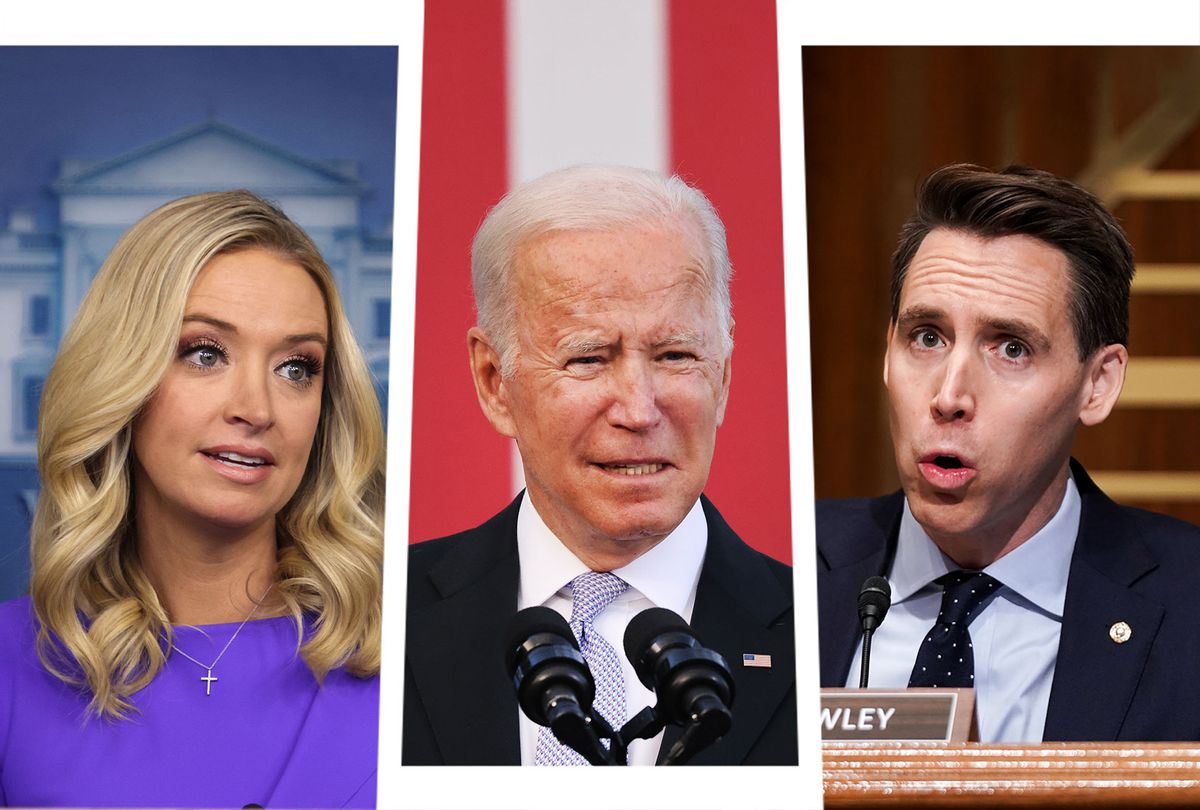 My mother taught me at a young age to appreciate people who learn quickly.

Of course, Mom's definition of "learning quickly" was that you only had to stick your finger in a light socket once before learning not to do it again.

That said, I don't know that a lot of people would pass her test — at least when it comes to politics.

Last Friday, shortly before midnight, the House of Representatives finally passed a $1.2 trillion infrastructure bill and sent it to President Biden for his signature. The measure was co-signed by 13 Republicans who crossed party lines to make the bill the greatest example of bipartisanship in the last decade. Still, don't confuse it with bipartisanship from the past, which meant large numbers of both parties signing on the bottom line together. But it was a first step, and the bipartisan move gave six Democrats the freedom to step away from the measure and vote against it.

Do not, for a moment, believe that purely symbolic gesture wasn't understood by the White House and sanctioned by the party. The six left-leaning Democrats who wouldn't vote for the bill did so because they wanted the Build Back Better measure voted on at the same time the House voted on infrastructure, and were convinced the BBB would not be voted on otherwise. If Nancy Pelosi had needed those six votes to pass the bill — well, the House might still be in session. But I have no doubt she'd have gotten them eventually.

RELATED: GOP may punish members for backing infrastructure — but Gosar, MTG are no problem

How this all shook out was vintage Washington politics the way it used to be played. Biden's greatest strength, as we found Friday, is working backroom deals, talking with politicians and getting them to come to the table in agreement on important issues. He also understands — unlike some of the Democrats who voted against the infrastructure bill — the art of "Half a loaf." Getting something is better than getting nothing. The Democratic opponents to the bill are more of the "two in the bush" mind, rather than being happy with the bird in the hand.

Former President Trump, who is currently trying to sell MAGA Christmas-tree ornaments while telling his fans they could win an autographed football by donating money to his cause, was obviously angry and issued the following statement:

Very sad that the RINOs in the House and Senate gave Biden and Democrats a victory on the "Non-Infrastructure" Bill. All Republicans who voted for Democrat longevity should be ashamed of themselves, in particular Mitch McConnell, for granting a two month stay which allowed the Democrats time to work things out at our Country's, and the Republican Party's, expense!

Texas Sen. Ted Cruz, who never met a problem he couldn't run away from, called Big Bird a communist.

It turned a few heads. Hawley prompted questions of "what's too much?" A former general who served in both Gulf wars asked, "What does he think soldiers in the field do in their down time?"

As Rep. Eric Swalwell, a California Democrat, said about Cruz, "Imagine picking a fight with a fictional bird instead of the man who called your wife ugly."

Clearly there are a lot of people who call themselves Republicans who perpetually stick their fingers in light sockets. Perhaps that is why an overwhelming majority of Americans take such a dim view of them.

As it is, Trump continues to make as much noise as he can, but the passage of the infrastructure bill may well be a watershed event that finally pushes him to the sidelines and into the recesses of time where he and various other demons of democracy should dwell until they fade from existence. The bill's passage also revives the idea of bipartisan cooperation and brings it back into the national consciousness as a solid example of the motto of the Commonwealth of Kentucky: "United We Stand. Divided We Fall."

The bill's passage is even more iconic in juxtaposition to what occurred in federal court this week. District court judge Tanya Chutkan ruled that Trump cannot shield White House records from the Jan. 6 committee. "Presidents are not kings and Plaintiff is not President," she wrote.

Trump, of course, appealed. That's his playbook: Keep everything tied up in court until hopefully it goes away.

But the reckoning for Trump's divisiveness continues, and of late has gathered some steam. Perhaps others are also coming around to the idea that a United States of America is preferable to a divided state of America. As CNN and others reported, the House committee investigating the Jan. 6 riot at the U.S. Capitol announced on Tuesday a new batch of 10 subpoenas to former Trump White House officials, as the panel charges ahead in seeking testimony and documents from witnesses relevant to its probe.

These subpoenas follow six others that were announced Monday.

Stephen Miller and Kayleigh McEnany, senior officials in the Trump administration, were among those subpoenaed. Miller, by his own account, "participated in efforts to spread false information about alleged voter fraud in the 2020 election, as well as efforts to encourage state legislatures to alter the outcome of the November 2020 election appointing alternate slates of electors," the committee noted.

McEnany? The woman who accused me of being delusional for asking Trump more than a year ago whether, "win, lose or draw," he would accept a peaceful transfer of power, is being sought because, according to the committee, she made "multiple public statements from the White House and elsewhere about purported fraud in the November 2020 election. For example, in the first White House press conference after the election, Ms. McEnany claimed that there were 'very real claims' of fraud that the former President's reelection campaign was pursuing, and said that mail-in voting was something that 'we have identified as being particularly prone to fraud.' At another press conference, Ms. McEnany accused Democrats of 'welcoming fraud' and 'welcoming illegal voting." She was also apparently hanging around with Trump during the January insurrection.

Trump's woes don't end there. New York prosecutors investigating his business dealings have convened a new grand jury to hear evidence in that investigation, leading to speculation that the ex-president may get an indictment as a Christmas gift — or at the very least a subpoena.

Trump has survived inquiries in the past. But he no longer has the services of a fixer like Michael Cohen, or even the decrepit and derelict Rudy Giuliani. Cohen has long said Trump could face an indictment by the end of the year. He may prove to be right.

Whatever happens to Trump, it is clear there is a renewed sense that on some basic level, our country works best when we try to work together — which means it doesn't work with Trump involved. It is a message the fascists do not want to hear. It is a message people like Hawley, Cruz and Ron DeSantis think they cannot use to get re-elected.

But if the Democrats and whatever remnants endure of the old Republican Party can beat that drum loudly enough, it will drown out the mutants who can only scream they are against cooperation, but always fail to provide an alternative policy worthy of consideration.

And in 2021, we are at that precipice. This country is dominated by two political parties. One has no heart. One has no head. By continuing to back Trump's play, what's left of the Republican party has revealed that it's not only heartless but headless. The GOP is dead. That party is a bloody stump, and individually all that remains are a bunch of schizophrenic, delusional paranoids you'd be embarrassed to see at a neighborhood barbecue, sticking their fingers in light sockets while screaming about Big Bird, video games and pornography. As former Republican congressman Joe Walsh said, "If you are pro-vaccine, anti-insurrection, and you state the truth that Joe Biden won the 2020 election fair and square, you have no future as a Republican. Just think about that."

Meanwhile, for the Democrats to prove they've grown a head to go with their sizable heart, they need to get inflation under control (start by just acknowledging it's a huge problem), find decent candidates who are not as marginal as the far right and continue to pass legislation that helps all Americans. And never stop reminding the voters that's what they're doing. That continues to be the key Democratic problem: poor messaging.

While the Democratic holdouts on the infrastructure bill indicate there are plenty of people on both sides of the aisle who love to stick their fingers into light sockets, last week's actions also show there is renewed hope for a return to sanity..

It's a nice way to cruise into Thanksgiving. As a nation, we all have something to be thankful for: infrastructure and hope.

More from the bewildering circus of post-Trump D.C.: