GOP may punish members for backing infrastructure — but Gosar, MTG are no problem 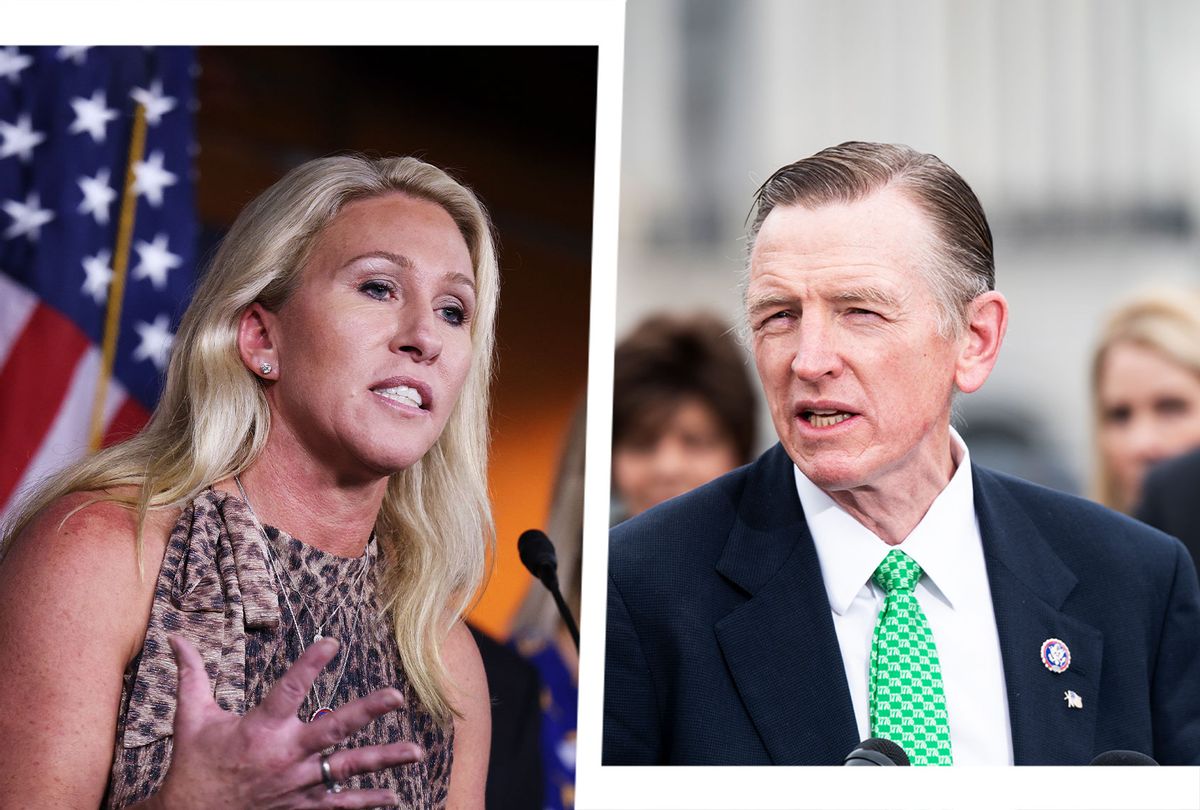 House Republicans are pushing to punish 13 members who voted in favor of President Biden's bipartisan infrastructure bill, which passed the House passed week.

That bill provided more than $1 trillion for infrastructure projects like roads, bridges and broadband expansion — and might not have passed the chamber without Republican votes. (Six progressive Democrats voted against it, unhappy with a deal to delay Biden's Build Back Better social spending bill.) Former President Donald Trump and his allies have assailed GOP members for helping Biden score a political win, and House Republican leaders are now bracing for Trump allies to attempt to strip the rogue members' committee assignments over the vote, according to Punchbowl News.

House Minority Leader Kevin McCarthy, R-Calif., pressed Republicans to wait until Democrats had enough votes to pass the bill themselves before voting for the bill. The House Republican Conference tweeted, and quickly deleted, a warning that a vote for the infrastructure bill is a vote for the Democrats' "socialist wish list," adding, "American's [sic] won't forget."

Republican members are particularly upset at Rep. John Katko of New York, top Republican on the House Homeland Security Committee, who voted in favor of the bill before it was clear that it would pass without Republican votes. When Katko and others ignored McCarthy's wishes, it left a "lingering feeling of betrayal," according to the report. Katko previously negotiated the terms of a bipartisan Jan. 6 commission that Republicans later rejected, and also voted to impeach Trump after the Capitol riot.

Other GOP members under attack include Rep. Don Young of Alaska, the longest-serving member of the House, Rep. Brian Fitzpatrick of Pennsylvania and Rep. David McKinley of West Virginia, who all hold top Republican spots on various subcommittees.

Republicans previously staged a similar effort to strip Rep. Liz Cheney, R-Wyo., of her House leadership position over her criticism of Trump, and unsuccessfully pushed to punish her and Rep. Adam Kinzinger, R-Ill., for agreeing to join the House committee investigating the Jan. 6 attack.

Trump, whose administration kept promising an "infrastructure week" but never passed or proposed any legislation on the subject, lashed out at Republicans who supported the bill for "helping the Democrats." Rep. Marjorie Taylor Greene, R-Ga., tweeted the phone numbers of the 13 Republicans, calling them "traitors" who supported a "socialist" bill.

Rep. Fred Upton, R-Mich., one of the Republicans in question, received a barrage of angry phone calls after the tweet, including one he shared Monday with CNN.

"I hope you die. I hope everybody in your f**king family dies," the caller said, calling Upton a "f**king piece of sh*t traitor."

Upton told CNN that the message was "very disturbing" and "frightening."

"We have seen civility really downslide here," he said.

But while House Republicans are infuriated about members of their caucus who defected to vote for a bill that was negotiated by Senate Republicans in the first place, the party has said virtually nothing about Greene's vituperative attacks on members of her own party.

Republicans pushed to punish Rep. Ilhan Omar, D-Minn., after accusing her of antisemitism, and spent months criticizing Democrats over their support for the 2017 Women's March because its organizer once attended an event with Nation of Islam leader Louis Farrakhan, the party has not said anything about Greene seeking to find "common ground" with Farrakhan's group on opposition to COVID vaccines this week. Greene posted photos of a Nation of Islam newspaper pushing anti-vaccine and antisemitic conspiracy theories.

"Louis Farrakhan says that forcing the vaccine is a 'declaration of war,'" Greene wrote on Twitter. "That is how strongly the Nation of Islam opposes Biden's vaccine mandates that force unvaccinated people to lose their jobs."

"This is sick behavior from Rep. Paul Gosar. He tweeted out the video showing him killing Rep. Ocasio-Cortez from both his official account and personal account," tweeted Rep. Ted Lieu, D-Calif. "In any workplace in America, if a coworker made an anime video killing another coworker, that person would be fired."

Three of Gosar's siblings earlier this year told Salon that they believe their brother is a "white supremacist." Organizers of the Jan. 6 rally that preceded the Capitol attack have alleged that Gosar, along with Greene and other House Republicans, participated in planning meetings ahead of the protest and that Gosar even offered "blanket pardons" to convince them to stage the event.

Ocasio-Cortez described Gosar in a tweet as a "creepy member I work with who fundraises for Neo-Nazi groups."

"He'll face no consequences bc @GOPLeader cheers him on with excuses. Fun Monday! Well, back to work bc institutions don't protect [women of color]," she tweeted, adding that "White supremacy is for extremely fragile people & sad men like him, whose self concept relies on the myth that he was born superior because deep down he knows he couldn't open a pickle jar or read a whole book by himself."

More from Salon on the insurrection caucus: