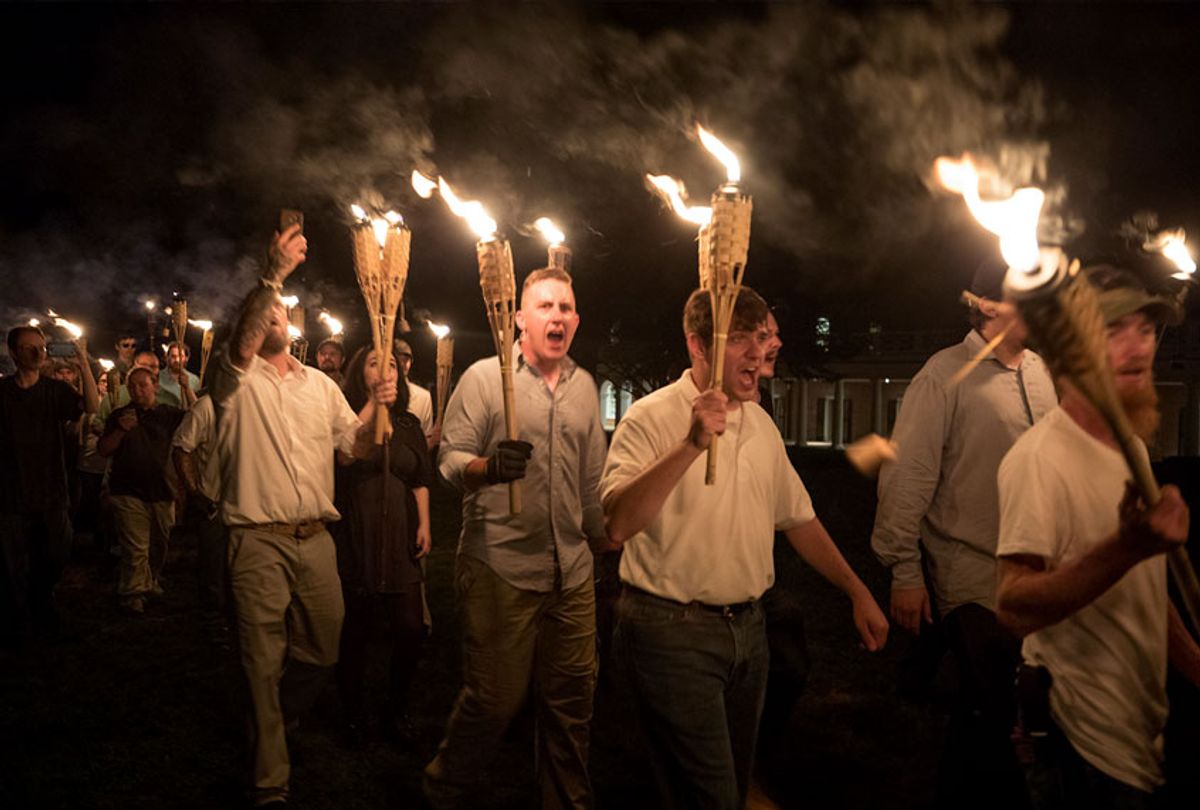 Plowing forward in a civil conspiracy trial against the organizers of the violent 2017 Unite the Right rally, the plaintiffs called an expert witness who methodically examined the defendants' private communications and social media posts, explaining how they exemplify the classic markers of violent white supremacist organizing.

The plaintiffs' attorney showed the jury a tweet sent by James Fields, who slammed his car into a crowd of antiracist marchers at the culmination of the rally, killing Heather Heyer and injuring dozens of others. The tweet displayed an image of a smiling white family, accompanied by the text, "Love your race, stop white genocide."

"Essentially you have this message that if you love your race, you will be committed to stopping 'white genocide,'" Peter Simi, an associate professor of sociology at Chapman University, testified. "People in the know understand that 'stop white genocide' is a call to violence."

Simi's testimony took most of the day on Thursday, with nearly all of the defendants in the lawsuit brought by nonprofit Integrity First for America cross-examining him. The time taken by defendants' counsel to cross-examine Simi likely indicates how damaging they view his testimony or their recognition that they're running out of time to undermine the plaintiffs' case.

Simi and co-author Kathleen Blee, a sociology professor at the University of Pittsburgh, concluded in a report prepared for the plaintiffs that the defendants "quite plainly followed the playbook" of the white supremacist movement through their participation in the Unite the Right rally.

"Our exhaustive review of their planning materials makes it apparent that the defendants utilized WSM tactics, principally the reliance on racial animus as a motivator, the intentional use of violence to achieve their goals, and a coordinated strategy to obfuscate their aims through the use of 'double-speak,' 'frontstage/backstage' behavior, and a discrete and new-age communication platform," they wrote.

Simi and Blee reviewed about 575,000 posts in Discord, a gaming platform with a private communication feature that was used to organize Unite the Right. Simi testified that he and Blee expect to receive $30,000 for 1,000 hours of work from Integrity First for America.

The plaintiffs introduced a raft of evidence showing that Fields harbored exterminationist views and worshiped Adolf Hitler, including a photo of his bedroom taken on the day after the car attack that showed photos of Hitler on his wall and bedside table.

In one tweet, Fields wrote, "Shit's going to hit the fan and you k*kes will know the wrath of the west once more."

Fields' Twitter history showed that he followed at least two of the defendants, Richard Spencer and Augustus Sol Invictus, as well as David Duke, who was invited as a surprise guest at Unite the Right. Fields retweeted or tagged Spencer at least 16 times on Twitter between March and August 2017, although there's no evidence that Spencer, the most prominent figure in the alt-right movement in 2017, ever responded.

Fields drove from his home in Ohio to Charlottesville, and wore a white polo shirt and khaki pants, the uniform of defendant organization Vanguard America. When he arrived at Emancipation Park, Thomas Rousseau, the ground commander of Vanguard America, handed him a shield with the organization's emblem, one of the defendants has testified.

Fields's social media history, which was shown to the jury on Thursday, pointed to even further engagement with prominent organizers and participants. Fields tagged Anthime Gionet, a white supremacist livestreamer also known as "Baked Alaska" who is currently facing charges in connection with the Jan. 6 assault on the US Capitol on July 8, 2017. He also retweeted and tagged Brad Griffin, a member of the League of the South who heavily promoted Unite the Right, and retweeted a video of Identity Evropa founder Nathan Damigo, who is a defendant.

The court played a recording of a jailhouse phone call between Fields and his mother after Aug. 12, 2017 in which Fields said the United States should have a one-party government and that he thought Spencer would be a good president.

While Simi was on the witness stand, the plaintiffs played a clip of defendant Christopher Cantwell speaking on his podcast five days before the Unite the Right rally in a bid to make the case that other defendants' shared Fields' exterminationist aims. The recording also supported Simi's testimony that white supremacists view "communists" — a loose term used to denote multiculturalists, leftists and Jews — as a threat.

"Let's gas the k*kes and have a race war," Cantwell said. "When I realized they're responsible for communism, that's a really good reason to genocide a people."

At the end of the statement, Cantwell can be heard giggling.

"There's quite a bit going on there," Simi told the court. "There's a call for violence multiple times. A reference to genocide. A reference to gassing. Clear expression of anti-Semitism. Mention of communism."

Simi and Blee's report also cited a Discord post by Cantwell as an example of white supremacists utilizing doublespeak to motivate participants to engage in violence while claiming not to do so.

While planning for Unite the Right was underway in June 2017, Cantwell wrote in Discord: "If you kill the Jew, the Jew in you dies with him I heard (This is a tasteless joke, relax k*ke)."

Cantwell asked Simi to read the post aloud to the jury, and tried to trip him up by asking if it was representative of "frontstage or backstage behavior."

"This is an example of how humor is used in the white supremacist movement to create doublespeak," Simi told Cantwell. "In this instance, humor is conveying violence while simultaneously making the case that it's just a joke."

Plaintiffs showed Simi a Discord conversation that included Michael Chesny, an active-duty Marine Corps member involved in planning for Unite the Right. The discussion began with a link to Amazon.com to purchase flagpoles, escalated into a conversation about using flagpoles as weapons, then to a reference to an ax handle as a weapon, and concluded with an image depicting people impaled on spears that was posted by Chesny.

"You get a combination of mundane conversation about the best way to use weapons coupled with graphic images of mass-casualty violence," Simi testified.

At the beginning of the day on Thursday, Judge Norman K. Moon agreed to a request by the plaintiffs to correct a statement he made in open court the previous day about "Antifa" that the plaintiffs argued was prejudicial. In a letter outlining their concerns, lawyer Roberta Kaplan asked Moon to clarify statements he had made about the Rev. Seth Wispelwey's testimony about Antifa on Thursday, expressing concerns that the judge's statements "will likely confuse the jury and prejudice the plaintiffs."

Moon's statements came up during Damigo's testimony when plaintiffs' counsel objected to a question about Damigo's differences with Antifa for lack of foundation.

"He was sitting here today and heard the reverend talk about Antifa. He was here all day, wasn't he?" Moon interjected.

After considering the plaintiffs' request for clarification, Judge Moon instructed the jury on Thursday morning: "I did not give a complete and accurate statement of all his testimony, and you should disregard it."

"What the reverend said is not a foundation for what Mr. Damigo said," Moon continued. "You should try to remember all of the reverend's testimony, and don't try to draw any inference from what I said. It's improper for me to make any statements that reflect on anyone's testimony. Disregard anything I say to the lawyers about the testimony. It's up to you to find the facts, not me. Just disregard anything I say when I'm talking to lawyers or instructing witnesses on how to testify. Anything like that is something you're sworn not to rely upon."

Defendants are expected to start calling witnesses tomorrow. The jury has yet to hear testimony from Jason Kessler, who obtained the permit and is considered the primary organizer of the Unite the Right rally.

To speed the trial along, the plaintiffs have agreed not to call Kessler and co-defendant Cantwell as witnesses, but instead to question them through cross-examination when the defense calls them to testify. But plaintiffs' counsel Karen Dunn told Judge Moon the plaintiffs want to hold their case open until they get an opportunity to question Kessler and Cantwell. James Kolenich said the soonest Kessler will be available is Monday.