It's not just United Airlines: Commercial air travel is cruel towards those with disabilities 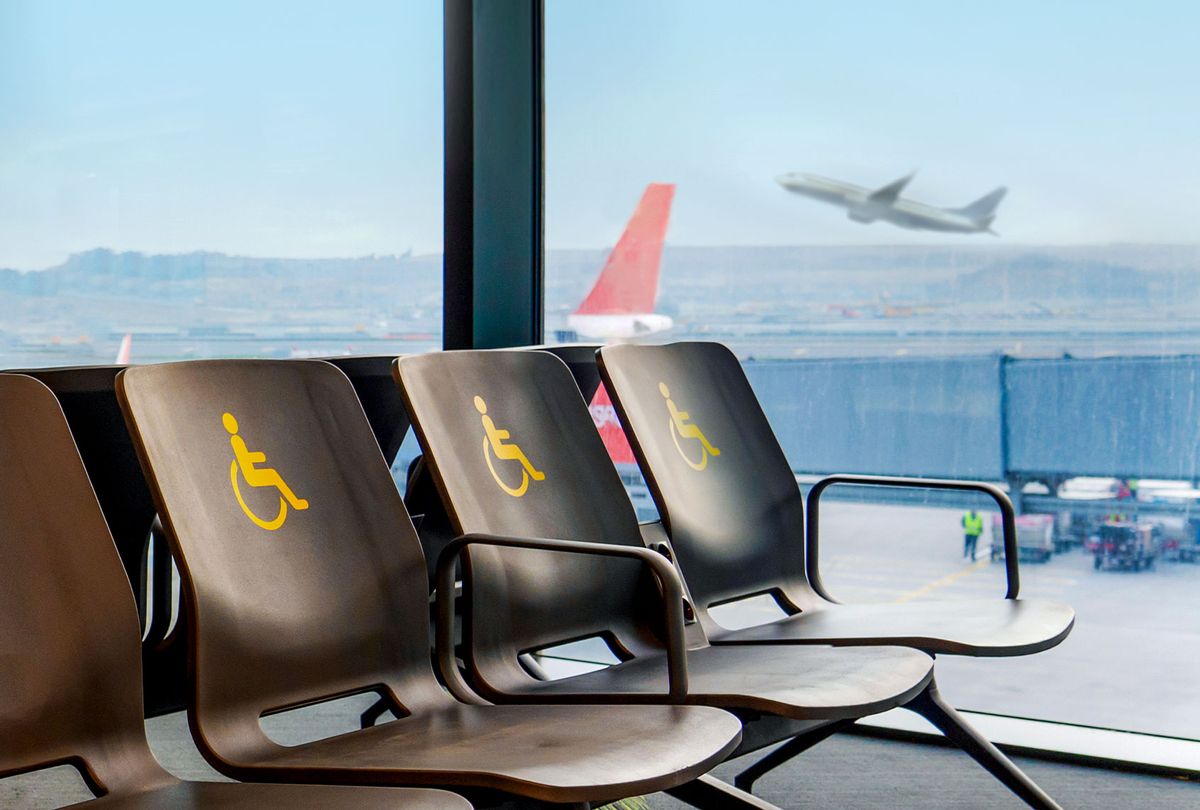 Empty disabled seats at an airport in the waiting area before boarding. (Getty Images/Thankful Photography)
--

United Airlines has made headlines in recent years for being, to say the least, rather unfriendly to its customers. In 2017, the company infamously used physical force to remove a passenger from a plane after it had been overbooked, injuring the man in the process. A few months later, the company got into hot water for the death of a giant rabbit named Simon; by 2018, it was also in trouble because a flight attendant forced a passenger to put her pet dog in an overhead storage big, where it died. The company has even been the target of a protest song, "United Breaks Guitars," by an artist who claims the company destroyed his musical instrument.

The corporation may be an easy target for jokes about its customer service crises. Yet the recent death of a disability rights activist spurred by the airlines' alleged destruction of her wheelchair speaks to a deeper systemic ableism in our society — an issue not merely confined to one airline.

Engracia Figueroa, a disability rights advocate at Hand in Hand: The Domestic Employers Network, died on Oct. 31 at the age of 51, months after United Airlines workers accidentally damaged her specialized wheelchair. According to Hand in Hand, the destruction of Figueroa's wheelchair in July was far, far more than an inconvenience. The device was built specifically to accommodate Figueroa's disability, caused by a spinal injury and leg amputation, and it was hazardous for her to spend too much time without it. The five-hour wait at the airport (during which she learned her chair had been destroyed) led to an acutely painful pressure sore for which she had to be hospitalized. Making matters worse, the company at first refused to replace Figueroa's chair in accordance with the Airline Carriers Access Act, which requires airlines to replace damaged or misplaced assistive devices. Because Figueroa's chair was motorized, it could have been unsafe or presented a fire hazard if she used it while damaged, and her body required something more specialized than the standard wheelchair they offered her.

Sadly, by the time United finally agreed to get Figueroa an adequate replacement chair, "the months in which they [United] fought against the replacement took a toll on her body," according to Hand in Hand. "While fighting with United to replace her chair, Engracia was forced to use a loaner chair that was not properly fitted to Engracia's body." This exacerbated her pressure sore and led to an infection that spread to her hip bone, eventually leading to her death. (Salon reached out to Hand in Hand and United Airlines for comment on this story; neither replied, although Hand in Hand has been outspoken in supporting Figueroa and United has publicly offered condolences to Figueroa's family through a statement to The Independent.)

In a number of interviews before she died, Figueroa explained that when airlines damage or destroy mobility devices, they ruin lives. "Mobility devices are an extension of our bodies. When they are damaged or destroyed, we become re-disabled," Figueroa put it, according to Hand in Hand. "Until the airlines learn how to treat our devices with the care and respect they deserve, flying remains inaccessible."

Her words mirror a 2016 report on flying with disabilities published in the journal Travel and Tourism Research Association. Based on an analysis of three major Australian domestic airlines, the scholars concluded that "the 'essence of experience'" for disabled passengers involved "a newly disembodied experience that transformed a person's impairment into socially constructed disability. The social construction was a product of international air regulations, airline procedures, pressures brought about by the introduction of low-cost airlines into Australia and a new wave of occupational health and safety considerations."

They also could have come from this 2009 study in the Journal of Travel Research: "The findings suggest that participants are confronted with physical and social difficulties, which, for wheelchair users, result in humiliation and physical suffering. Moreover, crew members' behavior toward people with disabilities indicates the need to train and educate airline employees."

Experts who spoke to Salon confirm that these descriptions, through written years ago, are still accurate. Public Policy Analyst Claire Stanley at the National Disability Rights Network, for example, used the expression "gate to gate" when describing the mere breadth of adverse experiences that a disabled individual may encounter while attempting to use commercial airlines.

"There have been a lot of unfortunate scenarios involving poor treatment of people with disabilities," Stanley explained. She described how disabled people whose medical devices set off security metal detectors, are fragile or are potentially embarrassing will complain that they were treated poorly by security as they went through the process of preparing for their flight. People with service dogs say they often encounter employees who do not know how to properly work with them, as do those with colostomy bags. (Obviously, the problems encountered in these two scenarios are quite different.)

"Going through security for the whole spectrum of disabilities, there is just a lack of training and a lack of respect for doing it with dignity and in a timely manner," Stanley told Salon. "I've heard people with disabilities say they have to go to the airport hours and hours early to get through TSA because if they don't, they're never going to make it to their plane on time." Even after one passes through security, the ordeal of getting on the flight does not necessarily end. Being able to easily move one's body to the vehicle itself is an ableist privilege, not a universal ability.

Once a passenger is on an airplane, their struggles may continue. Even if they do not need to worry about crew members destroying necessary life-sustaining equipment, they have to be concerned about their experience on the vehicle itself. This is where the ordeals of people who use wheelchairs become particularly conspicuous; a report in June found that airlines have lost or damaged more than 15,000 wheelchairs since late 2018.

"In October 2019, a [Paralyzed Veterans of America] member was hand-carried off of an airplane," Heather Ansley, the Associate Executive Director of Government Relations at Paralyzed Veterans of America (PVA), told Salon by email. "Although there was no emergency requiring it, she was informed that allowing individuals to carry her off was the only way for her to deplane. She reluctantly agreed even though she expressed her discomfort with the process. While she was being carried from the aircraft, she was afraid that they would drop her and could feel the struggle of those attempting to assist her."

This was not the only adverse flight experience that a PVA member reported. Ansley described a PVA member who had to use the arms of other seats to move himself to the front of the plane after no aisle chair appeared to transport him from his seat to the wheelchair waiting for him in the jet bridge. Another reported being allowed to fall to the floor by aircraft personnel who were talking while he was being removed from the plane. One PVA leader was "severely injured" after being dropped while getting transferred to an aisle chair so he could board; the error fractured his tail bone, eventually leading to skin breakdown and a bone infection.

"In general, commercial airplanes are required to meet almost no meaningful access standards for people with disabilities," Ansley explained. In addition to issues with storing wheelchairs, the inside of the plane itself can be fraught with awkwardness and even peril.

"The interior of the airplane is hostile for those who must board using aisle chairs as the aisle is narrow and many people report banging into armrests as they are dragged to their seat," Ansley wrote to Salon. "Once on the plane, lavatories are not accessible on the vast majority of single-aisle aircraft, which means that people with disabilities who have mobility disabilities or need assistance in the restroom are not able to use the bathroom on those planes. Thus, they must dehydrate and fast to minimize the chance of an accident."

Even before a disabled passenger arrives at the airport, they may encounter unfair difficulties because of their disability. A 2010 report in the journal Government Information Quarterly tested whether airlines comply with Department of Transportation regulations stating that companies cannot charge a purchasing fee for buying a ticket over the phone if the customer is a disabled individual who cannot use the website. Despite this rule, two of the airlines — USAirways and United — practiced discriminatory pricing in more than one-third of the phone calls, even after they were told that they were not supposed to do that. The problem, it appears, goes beyond "gate to gate." It is a structural flaw in how our transportation infrastructure perceives — or, perhaps more accurately, fails to perceives — people who have disabilities.

"I have yet to see a mode of transportation that is designed for all users ([especially] disabled travelers) at the outset," Carol Tyson, Government Affairs Liaison, Disability Rights Education & Defense Fund (DREDF), told Salon by email. "Disability activists and advocates have had to fight for every gain — literally laying bodies and lives on the line to get lifts on public buses in the 70's and 80's." Tyson added that if a mode of transportation is not disability-friendly, "we are stuck with them for years (if not decades), and it becomes more costly and sometimes less safe to retrofit."

The particular tragedy, at least in the case of wheelchair accessibility, is that American leaders have personally known for year how important it is for aircraft to accommodate that type of device. President Franklin D. Roosevelt, himself a paraplegic, used a special elevator nicknamed the "Sacred Cow" to embark and leave his plane without inconvenience. The machine was a marvel of engineering in the mid-20th century. The fact that it did not foreshadow an era in which disabled passengers could have the same experience as non-disabled ones speaks less to a lack of technology, and more to deep structural problems and systemic biases in how our transportation infrastructure is developed.

A spokesperson for the Transportation Department told Salon in a statement, "This account is heartbreaking and adds urgency to the work that we and others in this industry are trying to do to make aviation more accessible."

Update: This story was updated at 5:00 PM EST to include a statement by the Department of Transportation.

Correction: Some of the terminology in this story was corrected on Nov. 15 at 2:00 PM EST.