Cuban dissidents and their U.S. backers pushed for big anti-government protests this week. Why didn't they happen? 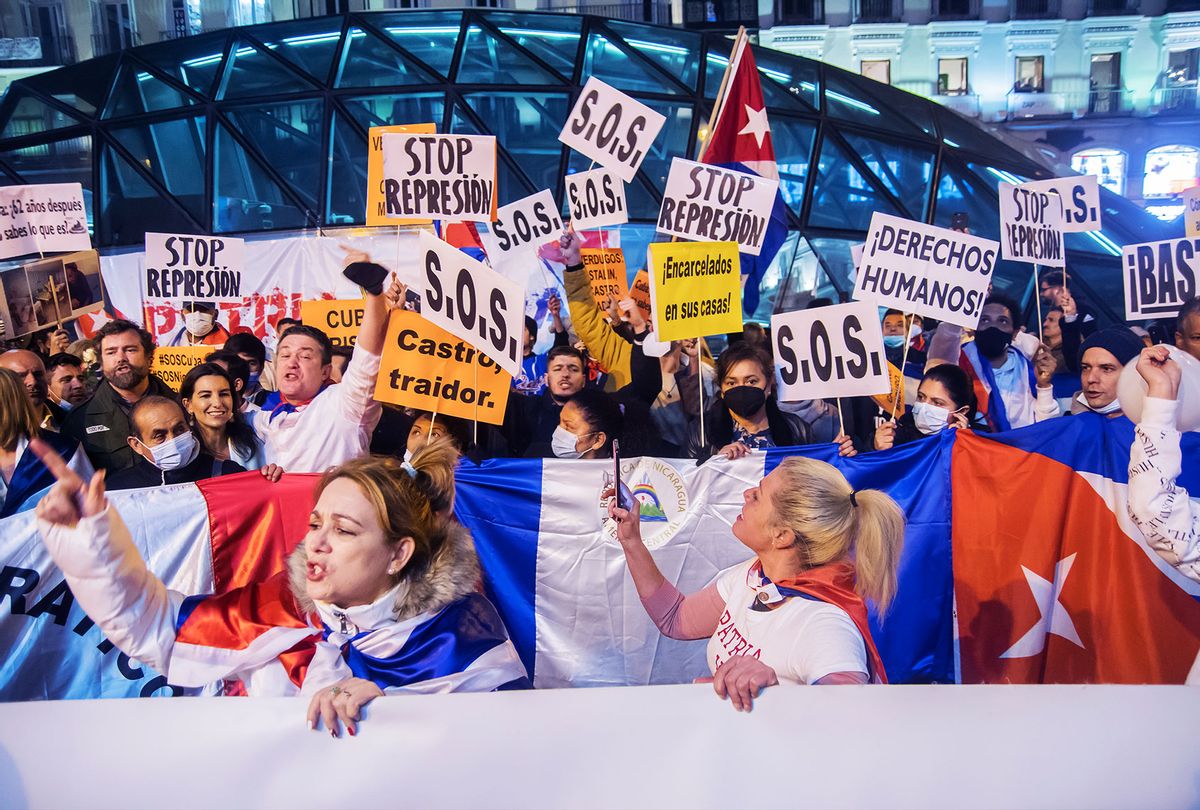 Hundreds of people gathered this Monday in the central and well-known Puerta del Sol in Madrid to protest against the "dictatorship" in Cuba, in favor of "freedom" and supporting the November 15 marches called in the Caribbean country to demand political change. (Alberto Sibaja/Pacific Press/LightRocket via Getty Images)
--

"If you build it, they will come," said Kevin Costner in "Field of Dreams." In Cuba, they didn't come. Dissidents on the island, with their U.S. backers, had been working feverishly for months to turn the unprecedented July 11 protests into a crescendo of government opposition on Nov. 15. They built a formidable structure, with sophisticated social media (including an abundance of fake news), piles of cash from Cuban-Americans and the U.S. government, and declarations of support from a bipartisan Congress and all the way up to the White House.

Even after the Cuban government denied the protesters a permit on the grounds that they were part of a destabilization campaign led by the United States, anti-government forces insisted that they were undeterred and were ready to take the risks. But in the end, their Field of Dreams turned out to be an illusion. What happened?

Intimidation of dissidents was certainly a key factor. The leader of the Facebook group Archipelago, Yunior Garcia, was kept under virtual house arrest. Other leaders were threatened with arrest and repudiated by their pro-revolution neighbors.

But at the grassroots, I talked to Cubans who had second thoughts about the usefulness of street protests. They had come into the streets on July 11, spontaneously, with all kinds of legitimate gripes: the scarcity of food and medicines, the long lines for basic goods, the rapid spread of COVID, the hard-currency stores they didn't have access to. But in the intervening months between the July protests and November, many realized that street protests only created division when the country needed unity. They realized that despite all the social media hype, the government was not about to fall, and that even if it did, there was no telling what would follow. If it was chaos and civil strife, or a rush of voracious Cuban-Americans trying to grab waterfront island properties, their precarious economic situation might get even worse.

RELATED: Neoliberalism vs. the planet's future: It's a decisive moment — and there are signs of hope

"I was out protesting on July 11," a young mother in Old Havana told me. "But since then, I've been weighing the pros and cons. The food situation here is terrible — we have to stand in lines for everything. On the other hand, we are safe. People don't have guns and go around killing each other; the police don't shoot people; we don't have to worry about our children when they are outside playing and they get a good education for free. If this government really collapsed, I'm afraid we might lose more than we gain."

People were also turned off by the choice of the date, Nov. 15, which was timed to wreak havoc on the precise day of Cuba's planned reopening after nearly two years of strict pandemic restrictions. Cubans who make their living from tourism, the island's major industry that had been decimated by the COVID showdown, have been anxiously awaiting the Nov. 15 resurgence of foreign visitors. The last thing they wanted was to scare off tourists with internal conflict.

And Nov. 15 was also the first day all schools would be open. Children in their neatly pressed uniforms were bursting with excitement after being cooped up for so long. Parents were thrilled that life was slowly getting back to normal now that almost the entire population — starting at age 2 — had been vaccinated with their locally produced vaccine. Whoever picked this momentous day for nationwide protests made an epic mistake.

Moving forward, most Cubans seem more concerned with getting their economy fired up than toppling their leaders. Even if they blame their government for mismanagement, corruption and a system that stifles private enterprise, few fail to recognize the enormous impact of U.S. sanctions. While the island has been under some form of sanctions for the past 60 years, the Trump administration added over 200 new measures that dealt serious blows, such as stopping the flow of remittances from Cuban-Americans to their families back home and prohibiting U.S. cruise ships from making stops in the island (a business that had flourished under Barack Obama's openings). Trump's catering to right-wing Cuban-Americans was successful in terms of winning Florida and giving the Republicans two more South Florida congressional seats, but it made life miserable for the Cuban people. Unfortunately, President Biden has continued Trump's hard line — putting partisan politics above the well-being of 11 million people.

There is little Cubans can do to alter U.S. policy, but they can — and want to — make their own internal changes. A theme I heard over and over from young revolutionaries is that the best way to challenge the counterrevolution is to make the revolution better. At an in-person gathering of leftist Cubans who, during the pandemic, created a popular Telegram chat group called La Manigua, I asked what kind of changes people would like to see. One by one, they gave examples: challenge the stifling bureaucracy, fire inept or corrupt people from their positions, encourage more grassroots initiatives, pass the Family Code that would give full rights to women and the gay community; get serious about confronting racism.

The last person wanted to talk about what he didn't want to change. That included the nation's emphasis on health care, science and education, which allowed Cubans to come up with their own vaccine and vaccinate the entire population; the sense of community that Cubans displayed as they helped each other through this pandemic; and the values of international solidarity embodied in the Cuban health care brigades that have, for decades, been going around the world saving lives.

The weekend before the planned protest, a new group of revolutionary youth called Pañuelos Rojos, or Red Scarves, set up a 48-hour encampment with music, theater, games and group discussions. On the last day of the encampment, there was a concert. The young people were sitting on the floor, grooving to the music of Tony Avila, when the Cuban president, Miguel Díaz-Canel, showed up. The students cheered as he sat down on the cement floor with them. Avila was in the middle of a song called "Mi Casa" ("My House"). "I'm going to change the furniture in my house," he sang. "I'll change the color of the walls, redo the doors, the windows, and take down some of the walls." Everyone was singing with him, and the president's head was nodding up and down. The crowd roared when it came to this verse: "Although I'm happy in my house, there are changes that must be made. But I won't go too fast, because I don't want to damage the foundation."

Certainly, the efforts by the dissidents and their U.S. backers to damage the foundation and topple the Cuban government are not over. But as the head of the North American division in the Foreign Ministry, Carlos Fernández de Cossío, tweeted, "The US government misread Cuba when it decided to invest so heavily in trying to instigate insurrection. We Cubans want to improve our country & move forward, not back to the times when we were the friendly playground of US capital, corruption & ambition." If only the U.S. government would learn this 60-year-old lesson.

More from Medea Benjamin on the contradictions of U.S. foreign policy: