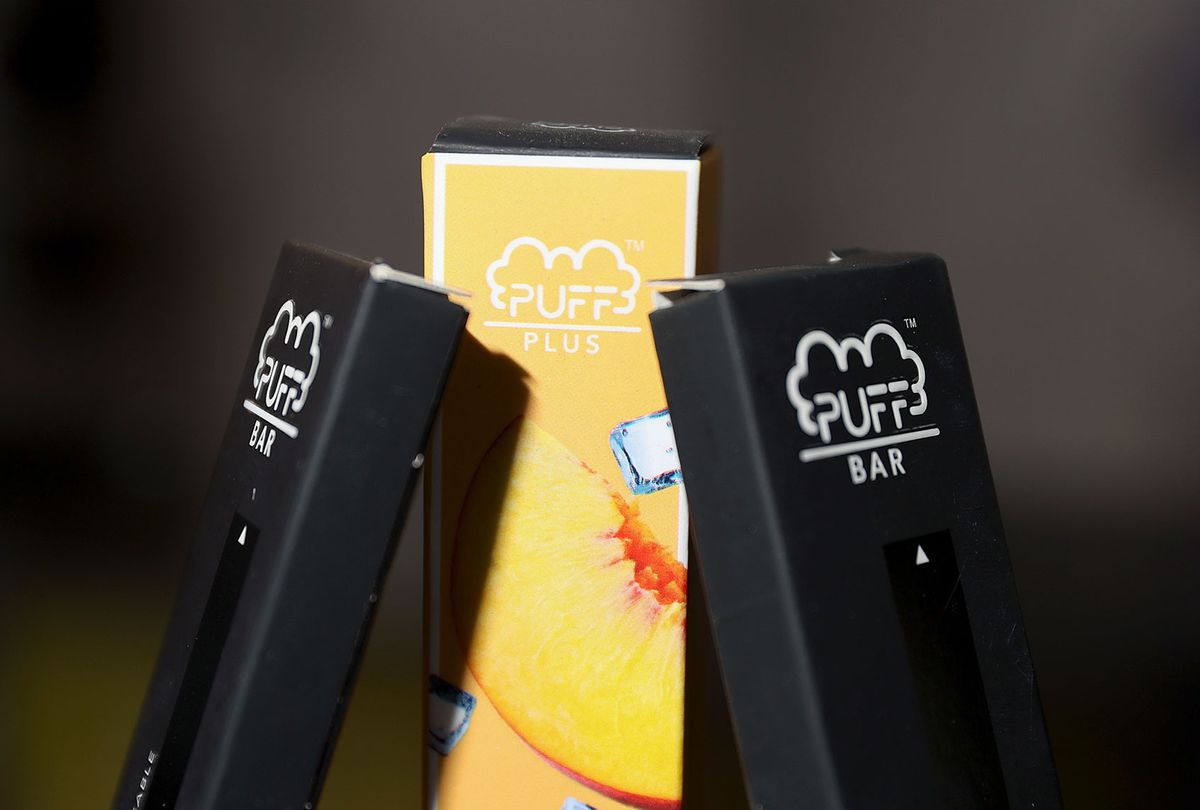 In this photo illustration, Puff Bar E-Cigarette products sit on a counter on October 12, 2021 in Miami, Florida. (Photo Illustration by Joe Raedle/Getty Images)
--

Hang out with Generation Z-ers for long enough, and at some point you're bound to be engulfed by the vapor clouds of Puff Bars. The brightly colored sticks resemble USB flash drives, and unlike other e-cigarettes, leave only the faintest odor upon exhalation. The vapes deliver synthetic nicotine interspersed with flavors like "Blue Razz and "Cool Mint" that sound more like candy varieties than e-cigarette scents.

Therein lies the problem, at least according to one state official. On Wednesday, North Carolina's attorney general announced he is concerned that the hip descriptions of Puff Bar flavors make them resembles products that could appeal to kids.

"We are actively investigating Puff Bar and other companies at all stages of the distribution chain, from manufacturers to retailers and everything in between to ensure they are not profiting off kids," Attorney General Josh Stein explained in a statement. "Where I find illegal behavior, I will not hesitate to take legal action." The attorney general's probe will not merely focus on Puff Bar but include other companies involved in the supply chain, from manufacturers to retail outlets.

In addition to launching a state-wide investigation into the e-cigarette maker, Stein also revealed that the state is suing Adam Bowen and James Monsees, the co-founders of Juul Labs Inc., a separate e-cigarette maker unaffiliated with Puff Bar. In the litigation, Stein accuses Bowen and Monsees of personally contributing to the company's policy of marketing its product to children and seeks civil penalties and damages. Since Juul became popular in 2017 and 2018, e-cigarettes have surged in popularity among Generation Z-ers, and has persisted even as the controversy around Juul's popularity among young people has hurt that specific company. A 2021 study cited in the Wall Street Journal found that 11% of U.S. high school students admitted to using e-cigarettes at least once in the past month.

Puff Bar is co-owned and co-managed by two friends in their 20s, Patrick Beltran and Nick Minas. Speaking with the Wall Street Journal last month, Beltran and Minas denied any responsibility for underage youths using their product, claiming that they have done "everything" they could to prevent that and blaming the problem on smoke shops and counterfeiters. (The Journal noted that their ownership "couldn't be independently verified.")

Puff Bar as a company has been mired in controversy. The company voluntarily halted its sales in July 2020 amidst criticism of its prevalent use among young people, and one week later the Food and Drug Administration (FDA) banned Puff Bars from the American market. By February, the company figured out how to end the FDA ban: It began producing bars using synthetic nicotine (what Beltran described as a "forced innovation"), which the agency has no power to regulate.

There are a number of health risks associated with vaping. Many of them involve one's lungs: Vaping uses fluids that have an oily liquid base, and doctors worry that these could get deep into your respiratory tract and provoke an inflammatory response. Vitamin E, for instance, was once a popular agent in the e-liquid found inside e-cigarettes, but it has been found in the lungs of people who have suffered vaping damage. The e-liquids can also contain dangerous substances like formaldehyde, diacetyl and acrolein (which is most often used as a weed killer). While it is unclear if vaping can cause lung cancer (it hasn't been around long enough to know for sure), its ability to get deep into your lung certainly suggests this could be the case. Vaping has also been linked to popcorn lung, lipoid pneumonia and collapsed lung.

When consumed by young people, Puff Bars can also lead to neurological damage. Being exposed to nicotine at such a young age could harm teenage brains as they are developing, as well as alter nerve cell functioning. Nicotine exposure also changes a young person's brain chemistry in ways that make them more likely to become addicted not only to nicotine products, but to other substances.

Update: Gregory Conley, President of the American Vaping Association (AVA), spoke with Salon after this article was published. He claimed that the 2019 vaping-associated acute pulmonary disease outbreak was caused by an adulterant known as vitamin E acetate being used in illicit tetrahydrocannabinol (THC) vaping devices. He also challenged the science behind the claims about neurological issues.