Stupid turkeys? Scientists say that the unfairly maligned bird may actually be stuffed with smarts

Despite their reputation, turkeys are highly intelligent birds with unique, under-appreciated evolutionary quirks 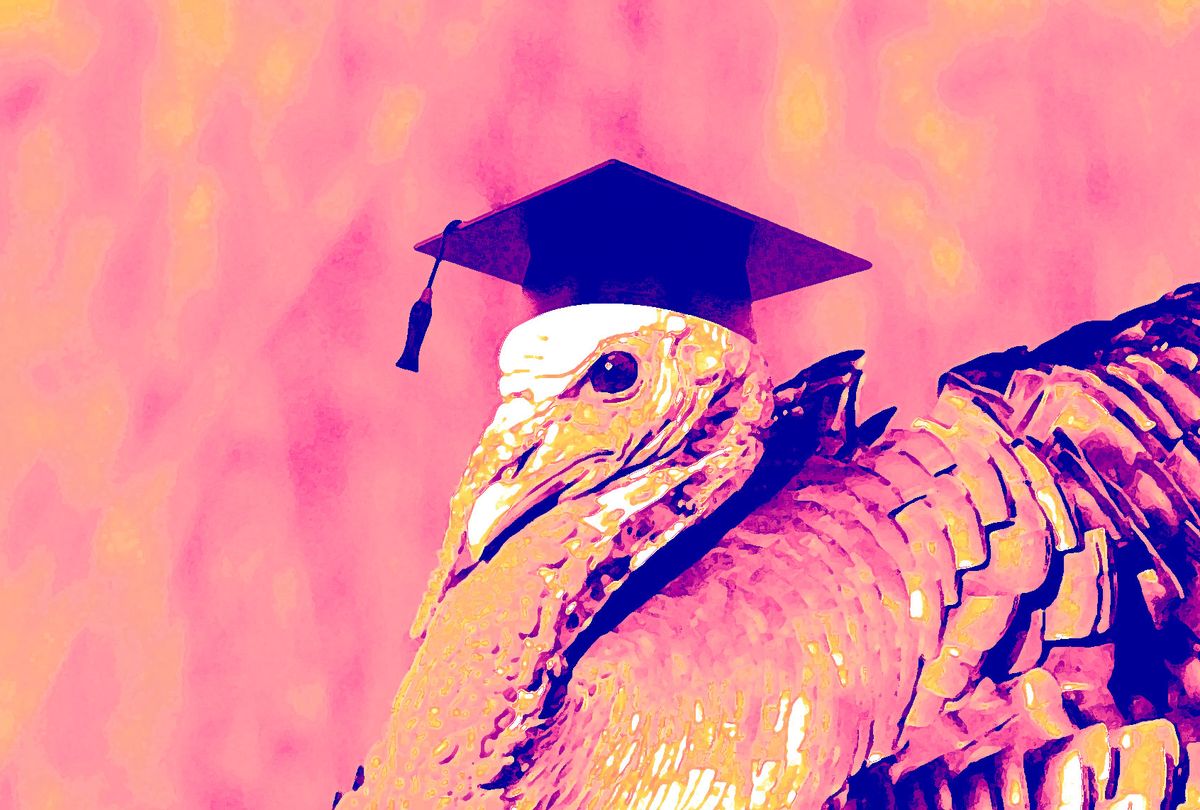 Turkey with a graduation cap (Photo illustration by Salon/Getty Images)
--

There is an old myth about turkeys that never seems to die. The basic premise is this: Every time there is a rainstorm, turkeys will turn their heads upward out of curiosity to observe the drops as they fall. Because they are reputed to be unintelligent, the folk tale says the turkeys will remain in this position even after it has become difficult to breath. Eventually, the turkeys will drown. The moral, it seems, is that turkeys are literally too dumb to survive.

While there is exactly zero scientific evidence supporting this belief, it underscores the larger cultural stereotype that turkeys are not very bright. It is hard to blame anyone for reaching this conclusion: Turkeys are, admittedly, a ridiculous-looking (and sounding) animal, with their necks pressed against their bodies, their ungraceful gaits and their "gobble gobble"-sounding cluck.

Yet if you want to feel less guilty about chowing down on a juicy gravy-covered drumstick on Thanksgiving, you can't use the premise of turkey stupidity to do so. The science makes it clear that turkeys are actually pretty smart.

"Turkeys probably can't do multivariable calculus or explain string theory, but then neither can most people I know (me included)," Christopher Elphick, an ornithologist at the University of Connecticut, told Salon by email. "At one level, any organism that can survive and thrive in a constantly changing environment that they have little control over, as turkeys often do, must be doing something right."

Elphick's observation about surviving and thriving while one's environment changes is crucial. When measuring intelligence, cognitive scientists emphasize an organism's ability to effectively adapt to its surroundings, not human-centric activities like reading a book or solving an algebraic equation. In other words, it is a mistake to dismiss turkeys as "stupid" because they can't do tasks that humans must perform — but it would be rational to draw that conclusion if, for instance, they did indeed drown themselves whenever it rained. Yet turkeys have proved quite adept at surviving amid changing conditions, perhaps more so than a bipedal species that is currently overheating the planet.

Alan Krakauer from the University of California–Davis expressed a similar point about turkeys' versatility.

"Turkeys may not have the problem solving skills of crows and ravens, but I'm reluctant to call them stupid," Krakauer wrote to Salon. "They can survive in all sorts of habitats, including cities, and make use of a huge range of different types of food. They have to do all this while navigating a complex social world. Turkey hunters will be quick to tell you how wary they can be during hunting season."

That said, if you've ever seen a squashed turkey as roadkill, you'll know that turkeys struggle with manmade environmental changes completely outside their sphere of understanding. This speaks not to "stupidity," but the simple fact that wild turkeys had no reason to ever need to comprehend something as complex as traffic.

Of course, domesticated turkeys aren't necessarily more intelligent for the experience. As Krakauer put it, there is a "night and day" difference between wild and domesticated turkey intelligence. Wild turkeys live in large ranges where older birds teach the younger ones how to flourish with a wild, unfettered lifestyle. Domesticated turkeys, by contrast, are stuffed into crowded quarters and bred to be docile.

"Many of the early wild turkey management projects failed because they used genetically wild turkeys that were raised on farms and then released, and these weren't able to gain enough survival skills to make it," Krakauer recalled. "Wildlife biologists realized they had to catch already savvy wild adults and move them so the new stock would have those wild behaviors to pass along."

One of those wild behaviors is the ability to form complex social structures. In this respect, wild turkeys are not dissimilar from humans. They both crave interactions and approval from other members of their species, and they rely on building teams in order to achieve immediate day-to-day needs.

These traits are not limited to merely forming rudimentary groups; turkeys have sophisticated social structures that they rigorously enforce.

"Males and females form separate flocks during the non-breeding season," Elphick explained. "Within these flocks there are well defined social hierarchies – usually pretty stable in the female flocks, less so in the male flocks." Elphick noted that this hierarchical behavior in poultry is where humans get the concept of a "pecking order."

Turkeys seem to embrace their various roles based not just on their relevant physical characteristic (size, speed, and so on), but also on their "personalities." As Elphick pointed out, researchers are finding more and more evidence that individuals in various bird species have "personalities" of their own. As one example, some individuals in a species will be more or less likely to take risks, such as visiting a bird feeder when a human being is close by.

"Turkeys can certainly learn that it is safe to come in to feeders, and I have friends who have birds show up at a regular time every day as though they are ready to have the feeders filled – a sign of intelligence," Elphick observed.

Krakauer also gave an example of turkey intelligence that involves a characteristic one does not usually associate with birds — putting one's immediate self-interest aside in favor of the long view. Reflecting on male turkey behavior during mating season, Krakauer described how turkeys who are brothers or half-brothers "sometimes form teams to cooperatively court and defend females." Their strategy is to make sure that a turkey hen breeds with a victorious member of their group; even though only one of them gets to breed, "the others benefit by passing on more of their genes through their successful brother than they would if they tried to go it alone."

Does this mean that one shouldn't eat turkeys during Thanksgiving? Obviously this is a matter of personal preference — Krakauer said that he still enjoys eating turkey, while Elphick is a vegetarian — but, at the very least, it is illogical to do so on the grounds that turkeys are somehow too stupid to have lives that even matter. As Ingrid Newkirk, president of People for the Ethical Treatment of Animals, wrote to Salon, "wild turkeys are smart enough to find their way, to avoid many predators, to diligently protect their brood, to find food in the forest, and can fly up to 55 miles per hour and run up to 25 miles per hour. They haven't a house with plumbing but they keep themselves impeccably clean by taking dust baths and preening their feathers meticulously."

In other words, turkeys are definitely more complex than the Thanksgiving-friendly stereotype would want you to admit.