Workers in Buffalo are ready to unionize. Starbucks is frantically trying to make sure that doesn't happen 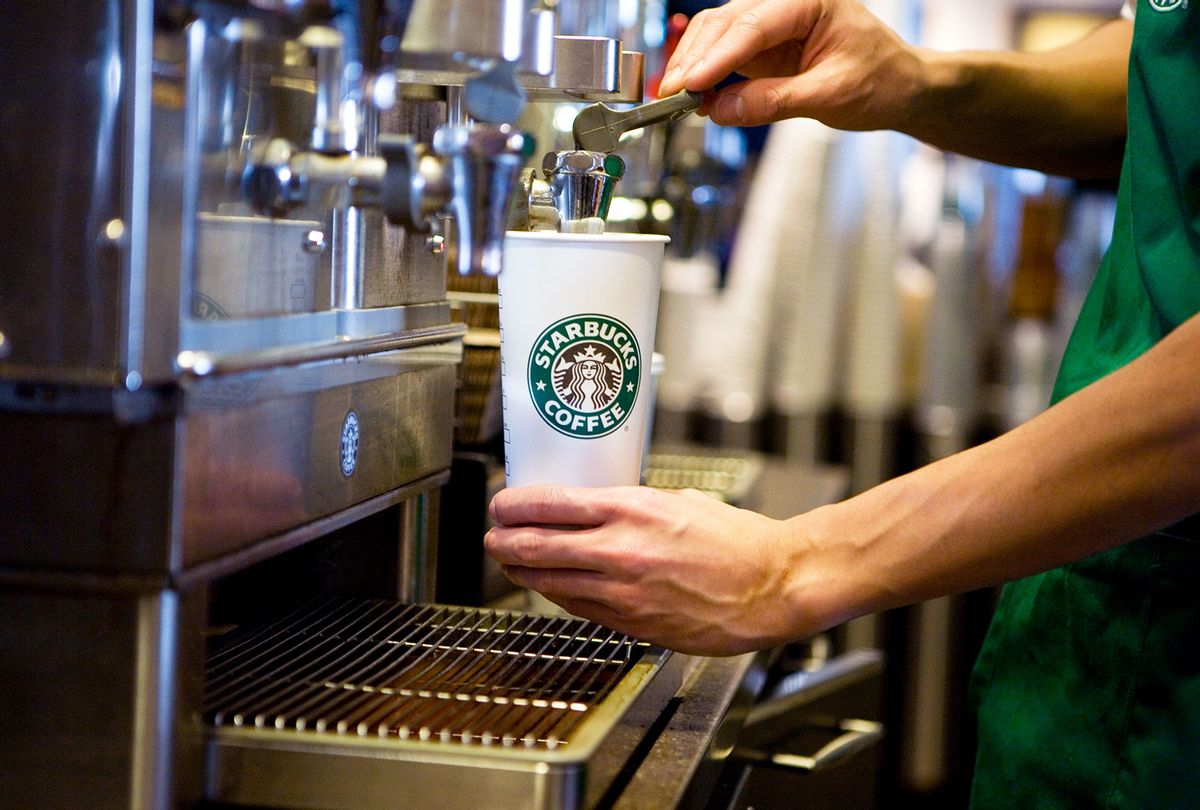 In June of 2018, just weeks before stepping down, former Starbucks CEO Howard Schultz issued a farewell address with a few words of wisdom for the company he'd leave behind. In it, he encouraged Starbucks workers of all stripes to "never embrace the status quo," advising them to approach the world with a sense of "empathy" and "kindness." But in recent months, as dozens of Starbucks employees organize a first-of-its-kind union drive – an effort that would ostensibly upend the company's status quo – critics argue that Starbucks has plainly jettisoned its ethos of empathy and kindness to stamp out the burgeoning workers' movement.

The organizing effort was first launched back in August, when three Buffalo stores in New York state filed petitions seeking representation by a union, according to The New York Times. Citing difficult hours, insufficient sick days, and chaotic working conditions – all of which were reportedly exacerbated during the pandemic – it didn't take long before workers established a partnership with Workers United Upstate New York, an affiliate of the Service Employees International Union (SEIU).

Gary Bonadonna Jr., International Vice-President of Workers United Upstate New York, told Salon that the pandemic "showed [workers] that they cannot simply rely on management to look out for their health and safety or financial well-being."

"This generation of workers understands that unions are the one vehicle that puts workers on an even playing field with management," he said over email. "They know that previous generations organized unions to build the middle class, and they are determined to stand up for their right to organize a union."

In late October, after three months of organizing, the National Labor Relations Board (NLRB) ruled that the three Buffalo locations could hold separate union votes. The development marked a decisive blow for Starbucks because the company had previously asked the agency to hold a single vote pooling together twenty stores in the area – a maneuver critics saw as a bid to delay the election or dilute the electoral strength of pro-union employees.

For now, Starbucks appears to have lost its battle with the NLRB. But its conflict with employees – who are set to cast an official vote on unionizing by December 8 – rages on. Meanwhile, the union effort has reportedly expanded westward to Arizona.

So over the past several months, the company has swarmed its Buffalo-area shops with company officials from out-of-town or out-of-state. Buffalo employees told the Times that the maneuver is "part of a counteroffensive by the company intended to intimidate workers, disrupt normal operations and undermine support for the union."

Casey Moore, a Buffalo-area Starbucks barista on the union organizing committee, confirmed that high-level executives like Rossann Williams (President of Retail for North America), Allison Peck (Regional Vice President), and John Culver (Chief Operation Officer) have all come into stores unannounced to meet with employees or deliver presentations about the apparent ills of unionization.

In one instance, Moore said, Culver came into her store and introduced himself without revealing his full name and position, telling her that he's a "partner" (a company term used to denote "worker"). Only minutes later, after doing a quick Google search, Moore learned he was the COO of the entire company.

"It's just been completely insane," Moore said in an interview. "The day after we sent a letter to [Starbucks CEO] Kevin Johnson telling him that we're forming an organizing committee and that our goal is to form a union, they sent in people like Rossann Williams, their support managers at all of our stores, [and] they've been hosting weekly or bi-weekly anti-union meetings."

She added: "Just seeing that has made me even more determined to unionize at this point because … they're not living up to their mission and values."

Wilma B. Liebman, a former chairwoman of the NLRB during the Obama era, told Salon that the abrupt presence of outside officials in stores could seriously undercut what labor law considers "laboratory conditions" – a union election environment that ensures workers have the freedom of choice.

Of the officials, Liebman said in an interview: "That was not even close to me, legally … It's hard for me to think that [employees] would not be coerced."

According to the Times, workers have also alleged that the company has packed certain locations in Buffalo with new and unnecessary employees, a move that could throw a wrench in the organizing efforts.

Alexis Rizzo, a longtime Starbucks employee in Buffalo, told the outlet that the sudden influx of new employees has left her feeling outnumbered. "It's intimidating," she said. "You go to work and it's just you and 10 people you don't know."

Still, sentiment amongst employees is not unanimous.

One shift manager who has been with the company for years told Salon that their experience is a far cry from what organizers have described.

"I've been in contact with probably hundreds of different restaurants, shift managers and store managers. I've come in contact with a lot of people from corporate. And everyone that I've met is just genuinely kind. They genuinely care about other people," they said anonymously in an interview arranged by a company spokesperson.

Asked about the presence of company officials in Buffalo stores, they added that it's a "lose-lose situation" for the company: "They don't come out, they don't care about the people."

Recently, the company mandated a rash of store closures in the Buffalo area, allowing employees to voluntarily attend a speaking engagement by Schultz, a multibillionaire who raked in nearly $10 million at the height of the Great Recession, when thousands of employees were being laid off.

Speaking to a large crowd of baristas, who on average make under $25,000 a year, Schultz acknowledged that Starbucks is "not a perfect company." Schultz made no explicit mention of the union drive but vaguely alluded to workplace issues at certain stores in the Buffalo area.

"Mistakes are made," he told the crowd. "We learn from them, and we try and fix them."

An especially bizarre moment came when Schultz, a Jew, recounted a story he was told about prisoners living in concentration camps during the Holocaust, many of whom, he said, had to share blankets in order to sleep.

"Not everyone, but most people shared their blanket with five other people," Schultz said. "So much of that story is threaded into what we've tried to do at Starbucks – is share our blanket."

Moore, who attended the event, said she found the analogy "incredibly inappropriate."

"It was just a very bizarre thing for them to think that having [Schultz] there would convince people to vote 'no,'" Moore added. "I think it just goes to show how out of touch they are right now."

While the exact purpose of Shultz's appearance in Buffalo was ill-defined, the company has for the most part made their position on a Starbucks union very clear.

In an internal letter shared to employees, Rossann Williams, President of Retail for North America, openly instructed "partners to vote 'no' to a union – not because we're opposed to unions but because we believe we will best enhance our partnership and advance the operational changes together in a direct relationship."

A company spokesperson echoed Williams' sentiment with Salon, saying over the phone that a "union would interrupt and jeopardize" management's relationship "with hourly customer-facing partners."

Pressed on why, the spokesperson explained: "I think it's just in the way that humans operate. It's fundamentally bringing a third party into the relationship, preventing partners from bringing their concerns and ideas directly to their store managers and others."

While the company has downplayed the value of unionization, it already appears to be taking heed of their organizers' demands. Back in late October, after the movement had already garnered significant momentum, Starbucks suddenly vowed to increase starting wages to $15 per hour, upgrade equipment, expand recruitment and training programs, and more.

According to Cornell's Labor Action Tracker, the share of workers on strike last month jumped to 25,000 – a marked departure from the three months prior, which saw an average of 10,000. Many experts and labor advocates told Salon that strikes are being driven largely by a growing sense of dissatisfaction amongst essential workers as the pandemic wanes.

Corrina A. Christensen, Director of Public Relations & Communications of the BCTGM International Union, which represents workers at Frito-Lay, Kellogg, and Nabisco, said that the strikes have "everything to do with workers being fed up with employers bent on disrespecting their work and demanding take-aways in wages, benefits, forcing overtime…after they were upheld as 'essential.'"

RELATED: From Striketober to the Great Resignation: Pandemic pushes workers to rise up

Given the present U.S. labor environment, with workers feeling more emboldened than usual, a win for Starbucks could encourage employees across the entire service industry to mount campaigns of their own, Bonadonna Jr. told Salon.

"A union victory at one store would have historic significance," he wrote. "American workers would see that despite the power and wealth amassed by billionaires, ordinary working people can gain dignity and respect on the job by banding together."