26 Hanukkah recipes to celebrate the festival of lights

Accompany these traditional Hanukkah foods with a game of dreidel 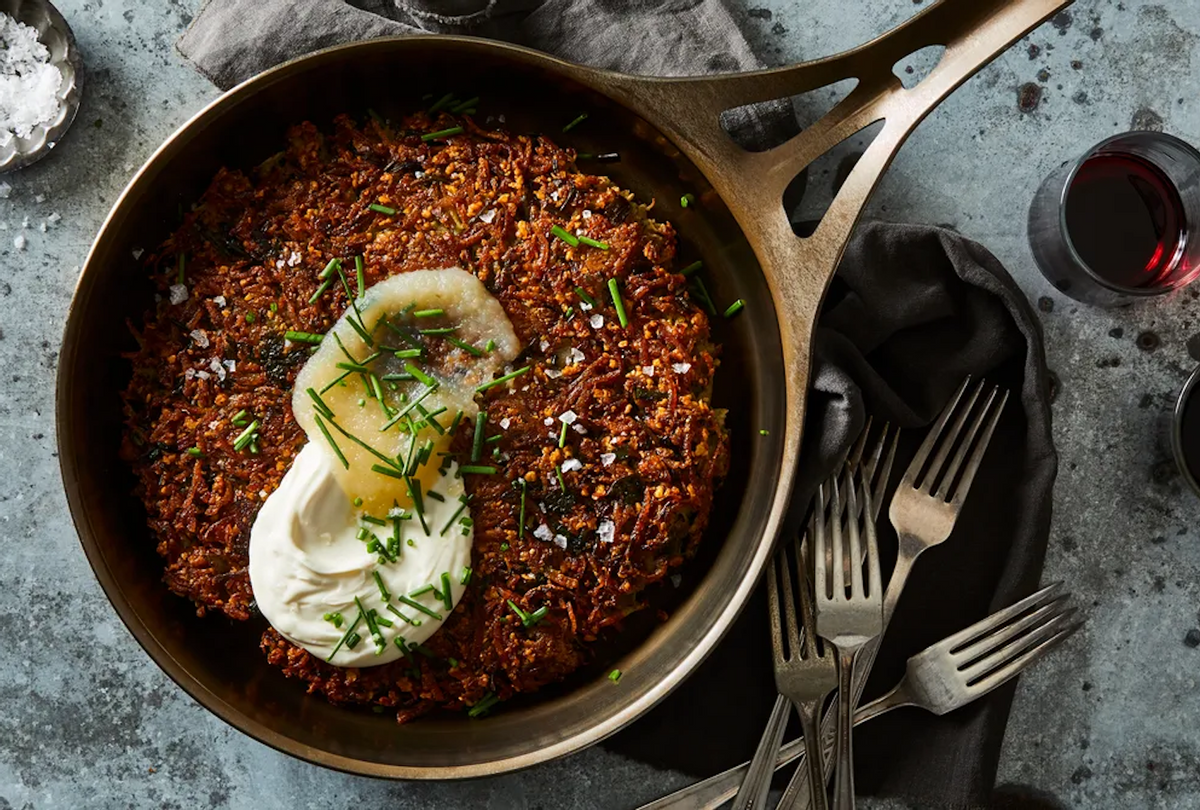 Hanukkah, the Jewish celebration of light, is just around the corner and you can bet we're breaking out the frying pans, potato graters, and tons of oil. But a whole lotta latkes (although delicious) aren't the only way to observe the Festival of Lights. There are so many crispy, crunchy dishes that commemorate the miracle of oil. From traditional roasted chicken and braised brisket to unexpected crowd-pleasers like asparagus latkes, here are 26 of our favorite fried foods.

Celebrate the Festival of Lights with this foolproof roast chicken that's perfect for a crowd, and especially great for beginner cooks hosting their first dinner for the Jewish holiday.

It wouldn't be a proper Hanukkah celebration — or frankly any family gathering — without brisket. This version has a rich, tangy sauce made with tomato sauce, red wine vinegar, and beef stock.

Braiding challah bread takes skill and a practiced hand, but this recipe is a little bit more lenient when it comes to technique. The result is just as beautiful.

Accompany a main course of brisket or roast chicken with, what else, but noodle kugel as a side dish. Dress up egg noodles with both fresh sage and thyme, plus caramelized onions in a nutty brown butter sauce.

Fried potato pancakes are a staple for the Hanukkah menu. The use of baking powder is a surprise addition, but one that will help the latkes to maintain their crispiness, even after they've sat at room temperature for a bit.

These aren't exactly like latkes. They're fluffier, pillowier, and cheesier, thanks to a combination of cream cheese and ricotta.

Instead of frying dozens of individual latkes, save time (and reduce the chance of hot oil burns) by making one giant latke in a cast-iron skillet. A little bit of matzo meal provides body, and sour cream and applesauce are the necessary accoutrements.

Traditionally, latkes are deep-fried to ensure that they're super crispy and evenly golden brown on the outside. (Of course, the deep-fry is also a way to commemorate the oil that burned for eight whole nights). But Assigning Editor Rebecca Firkser achieved the same result just by baking them on a sheet tray in the oven, with plenty of oil of course. Less splatter, same delicious flavor.

"Not my grandma's latkes or my mom's. Because instead of starchy potatoes, we're turning to juicy, sweet asparagus," writes Food Editor Emma Laperruque. Somehow, we don't think Emma's family will be disappointed by this easy green recipe for Hanukkah.

The most traditional, most coveted, most spectacular, and most likely to disappear from the table in the blink of an eye are homemade jelly doughnuts, also known as Sufganiyot, which are a must-have Hanukkah dessert.

Three (count 'em three!) types of chocolate — dark, milk, and semi-sweet — are used in the nutty spiced filling for these soft cookies.

"Black and white cookies are the perfect marriage of chocolate and vanilla, cookie and cake. They are a classic deli treat, usually about 5 inches in diameter, but here I've made them mini which I find is a much more reasonable amount of cookie," writes recipe developer Yossy Arefi. The perk of the mini size is that you will still have plenty of room for, say, half a dozen Sufganiyot.

This is the babka recipe that started it all. Or rather, started the trend of swirly twirly chocolate babka that captivated the attention of bakers in New York City and beyond. Is that not reason enough to bake a loaf for Hanukkah this year?

In the middle of December, when the temperature drops, the snow starts to fall, and you can't leave the house without multiple layers of clothing, these fruity rugelach cookies will give you a taste of the tropics.

For a delicious fall twist on the classic jelly donuts, fill 'em with homemade cranberry jam instead! Fresh ginger, vanilla bean, and the zest and juice of lemon and oranges bring brightness to every bite.

"This apple cake is as light, puffy, and fluffy as it is easy, easy, and easy. It comes together with only four ingredients (not counting salt, an honorary Big Little ingredient) and takes 20-something minutes to get in the oven," writes Food Editor Emma Laperruque. It's a delicious dessert to serve on Hanukkah.

In addition to the usual latkes, there are so many other things you can fry for Hanukkah for a side dish or just something snackable as you mingle. Recipe developer EmilyC fried button mushroom in a panko breading and the result is an irresistible meaty treat that's totally vegetarian.

Although churros are traditionally a Mexican sweet street food, frankly there's no reason not to serve them as a Hanukkah dessert. For starters, they're fried. But they also masterfully balance spicy and sweet flavors and can be served with fruit jam, chocolate sauce, or Nutella.

For a light lunch during Hanukkah, or a simple starter to the meal, whip up this simple chicken noodle soup made with egg noodles. And we're not talking about the dried kind of pasta you buy from the grocery store. These noodles are thin slices cut from a creamy omelet.

"Zengoula with Lemon Syrup is a great example of a traditional dish with a little twist that makes a big difference, says recipe developer Alice Medrich. "Instead of plain sugar syrup, the pastries are soaked in fresh lemon syrup. The results are easy to imagine: more fragrant and wonderful and, I have to say it, "zingier" zengoula.

Pickle lovers will rejoice over these crispy fried bites that have the perfect amount of breading on the outside and delicious dill flavor on the inside.

This year, Hanukkah falls just days after Thanksgiving, so these potato pancakes are a genius way to use up leftover mashed potatoes from your Turkey Day feast.

These are a far cry from traditional Hanukkah food, but they're potentially the greatest (or should I say sweetest) addition to this year's festivities.

After you light the menorah, serve a platter of these not-too-sweet, subtly floral pastries. They're a bit of work to make, but you can prepare them a few days in advance so they're ready to go as soon as the match strikes.

While you're having drinks, put out a bowl of these fried chickpeas. They're easy to stuff into your mouth to avoid answering why you haven't found a nice Jewish boy or girl to marry yet.

Instead of the usual pumpkin pie, spiced lattes, or quick breads, make use of sugar pumpkins for this extra-special seasonal spice dish.