Thanks, Marie Kondo: How fear of disorder nearly ended my marriage

For ataxaphobes like me, shows about tidying up set unrealistic expectations 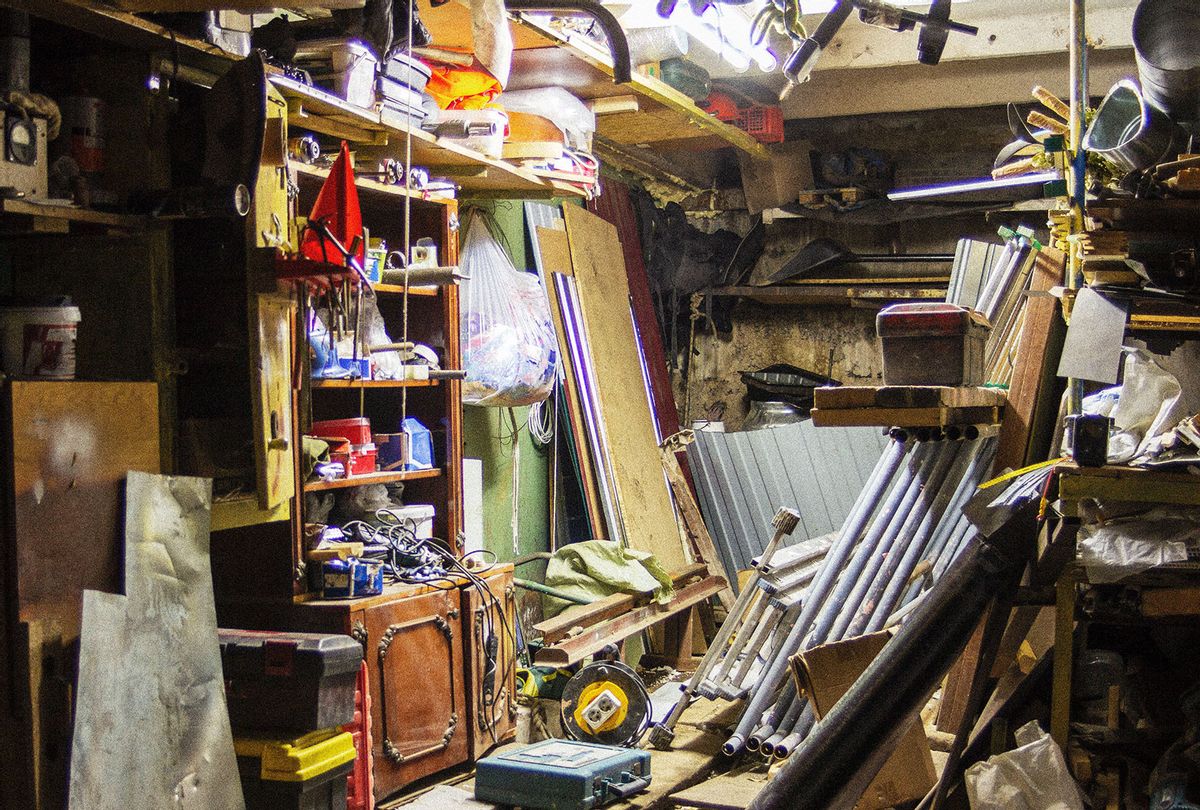 Netflix's most beloved organizer is back, with a twist: the eponymous professional's show, "Sparking Joy with Marie Kondo," has shifted its focus from internal tidiness to external tidiness — a category that includes business, relationships and community. For those viewers who, like myself, experience literal anxiety in the presence of abject disorganization, a television show that turns chaos into order in 45 minutes flat is nothing short of a dream come true.

Indeed, while Kondo's teachings have an obvious mass appeal, there is one particular demographic that is especially drawn to these types of home organization shows: Those who, like me, suffer from a condition called ataxophobia.

The word ataxophobia is derived from the Greek word ataxo-, which means "without order." Specifically, ataxophobia is a type of phobia in which the sufferer becomes overwhelmed and anxious in the presence of disorder. You can see how watching Marie Kondo transform a house from disaster to spic-and-span might instill feelings of relief in those of us who suffer from ataxophobica.

The reasons vary as to why one might develop ataxophobia, but the root cause almost always includes a history of trauma, where the sufferer experienced emotional distress paired with a messy environment. These viewers flock to the happy endings of "Sparking Joy" with the visions of color-coordinated storage units sparkling in their eyes.

From as early as I can remember, my family's kitchen countertops were stacked so high with papers and miscellaneous objects that there wasn't any room to make a sandwich. The stench of cat urine emanated from closets; dog hair caked the blue carpet, and sometimes even appeared inexplicably in my food. I was mortified at the thought of inviting friends over. Sometimes, I'd get so fed up with the mess that I would clean the entire house myself, only to watch it quickly return back to its state of chaos facilitated by my parents.

I wasn't the only one disturbed by the mess. It frustrated my parents so much that it would induce bouts of rage that compelled them to purge everything via a big black garbage bag, which they filled with whatever was within grabbing reach while listening to music at an ear-splitting volume.

The soundtrack accompanying these periodic purges was burned into my mind to the point that upon returning home after school, and hearing that music playing, I'd quickly reroute and go anywhere else.

The nightmares persist to this day. Periodically, I wake up in the middle of the night, heart pounding, to a dream of a house, which is always overflowing. Sometimes it's jam-packed with other people's things, sometimes it's overflowing with my stuff. Regardless of the details, the urge to run away is still the same.

But instead of giving into that urge, I would settle myself down for a HGTV marathon and live vicariously through the lives of those on home improvement shows. Which, paradoxically, made my anxiety even worse.

In lieu of dealing with their trauma, many ataxophobics, like myself, are drawn to the unrealistic solutions proposed by reality television. Thanks to mirror neurons in our brains, as we watch chaos turn order, we actually feel like our own environments are being transformed like those that we are witnessing on the television.

Mirror neurons, according to researcher Anna Napolitano, are cells in the brain that constitute the neural basis of imitation, learning, and empathy. In essence, while you are watching someone's closet being emptied, organized, and redecorated, your brain imagines that your closet is the one undergoing the makeover.

The problem is that these transformations are highly edited and scripted. They create unrealistic expectations, including speed of achievability. "When consumption of these narratives outweigh(s) everyday experiences they can begin to shift our expectations of what is 'real,'" says Dr. Brendan Rooney, psychologist at the UCD School of Psychology in Dublin, Ireland.

Over time, our brains collect these experiences and formulate a warped foundation of expectations around cleanliness and organization.

Expectations of cleanliness can be the pivot point on which relationships survive or fail. In fact, according to a 2021 article published in a Harvard Business Study, upwards of 25% of divorces are due to discrepancies in household chores.

Paul and I met in graduate school. Being the artistic type, Paul kept stacks of sheet music on the floor next to his piano, and being the ADD type, his apartment was wallpapered with Post-it notes, half-finished projects, and dishes in varying states of cleanness were stacked on the countertops.

He was raised in his parents' motel, and promised himself he'd never make another bed as long as he lived, and I could live with that. But I did give him an ultimatum: If you want us to ever live together, the Post-it notes have got to go. And no more week-old dirty dishes.

Three weeks before our wedding, I went to Paul's townhouse to greet him on his return from a week-long trip. I arrived before he did and let myself into the door by the kitchen. But something was very wrong. To my left, the kitchen sink was filled to the brim with dirty dishes, soaking in stagnant water. Bugs bounded over the top delighted by their new habitat, and I felt my brain short circuit. A familiar panic filled my lungs and my blood boiled with rage.

Once I started yelling, I couldn't stop. And in the end, with tears streaming down my cheeks, I gave in to the urge to run away. With my fiance's dismayed expression in the rear view mirror, I escaped the nightmare that had narrated so much of my adult life, knowing that Paul and I had essentially reached a fork in the road. And it wasn't a fork that a vicarious tidying-up show could fix, even if we were somehow lucky enough to be the subjects of it.

Until you do the inner work, you will, like Sisyphus, continue to find yourself climbing a never-ending mountain, attempting to quell the overwhelm and stress through endless cleaning, organizing and redesigning, but never fully purging the feelings of anxiety and panic when another mess appears.

My method of doing inner work was to try a type of therapy called EMDR (short for eye movement desensitization and reprocessing). Research has found that EMDR Therapy is one of the most effective treatments for phobias, and its effects can be quick and profound.

This therapeutic process helped me to realize that the moment I saw those week-old dishes in the sink, I no longer saw Paul for who he was: a distracted and busy person who deprioritized cleaning over his other responsibilities. Instead, in his place was a representation of the life I had promised I'd never go back to. Over the next few weeks of therapy, my anxiety lessened, and I was even able to go to bed without doing the dishes first.

Secondly, Paul and I needed to get back on the same page. Typical solutions for relationship discord often emphasize clarifying expectations, opening the doors to communication, and effective problem solving. But, according to the research of Susan M. Johnson, founder of Emotionally Focused Couples and Family Therapy (EFT), you will have a better chance of staying out of that 25% divorce (due to cleaning differences) statistic, if you do the work to understand how your partner feels and thinks about things — including cleaning styles. That means realizing that just because you didn't consider a dirty dish a big deal doesn't mean it isn't a big deal to your partner.

By gaining understanding of my story — how my younger self felt out of control and claustrophobic in the presence of disorder — Paul began to prioritize cleaning the dishes in the sink. Conversely, I found myself better able to acknowledge that Paul had grown up in a motel and spent most of his childhood cleaning rooms, thus enabling me to release the judgment that he was a messy, selfish slob.

While being a home improvement–obsessed ataxophobic almost ended my relationship, the process of going deeper, transforming my trauma, and working with my husband, wound up making my relationship with myself and my partner a whole lot better in the end.

And staying away from shows about tidying up also helped.

Dr. Nicole Cain has a degree in clinical psychology and is a pioneer in integrative mental health. She has been interviewed as a mental health expert in Forbes, is published in journals such as Well+Good, INM, and NDNR, has been a national speaker for PESI, is the founder of the Anxiety Breakthrough Program and is currently writing a book about anxiety. Dr. Nicole can be found on Instagram @DrNicoleCain.