New Alzheimer's drug, approved by the FDA over much uproar, accounts for half of Medicare's yearly price increase 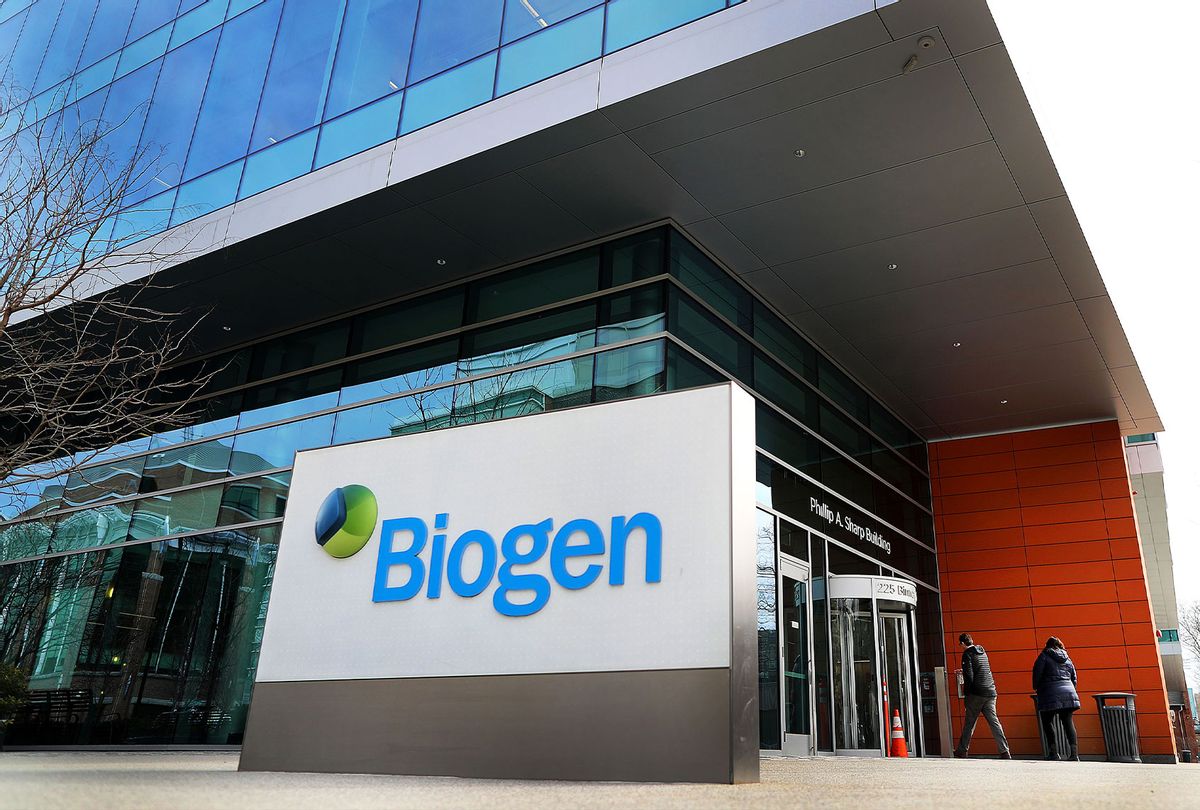 The exterior of the headquarters of biotechnology company Biogen in Cambridge, MA (John Tlumacki/The Boston Globe via Getty Images)
--

When Biogen's new Alzheimer's drug, Aduhelm, was officially approved for use by the Food and Drug Administration (FDA) back in June, it was a decision that flouted overwhelming pushback from doctors in the field, dozens of whom argued that Biogen had failed to demonstrate whether the drug had any clinical value. Since then, only about a hundred Americans have been prescribed the medication – a vanishingly small amount for a disease that afflicts 5.8 million. But even as the scope of Aduhelm's use remains limited, critics are now warning that its fiscal implications could spell disaster for American healthcare as we know it.

Aduhelm alone, priced at a whopping $56,000 a year, has already contributed to an approximate $10 spike in monthly Medicare Part B premiums, according to a recent CNN report. Comprising about half of this year's price increase, Aduhelm will bring the monthly cost of Medicare up from $148.50 to $170.10 – the biggest jump in dollar terms throughout the program's entire history, according to NBC15. It should be noted that the $10 upcharge applies to all Medicare enrollees – that is, over 62 million Americans – most of whom will never directly benefit from Aduhelm. And for the drug's actual recipients, the $10 add-on is just the tip of the iceberg.

First, there are co-payments. Because Medicare recipients are typically required to cover 20% of Part B treatments as part of the program's co-insurance policy, Aduhelm patients have to cough up an extra $11,600 out of pocket annually. An $11,600 copayment is already cost-prohibitive for the vast majority of Americans. But when it comes to Medicare enrollees – whose median income is roughly $30,000 a year – it's easy to see how just a year's worth of treatment is completely out of the question.

Then there's the cost of routine screening. In order to monitor the risk of brain bleeding and swelling – side-effects which occurred in about 41% of clinical patients from 2019 and may have led to the recent death of a 75-year-old woman – Aduhelm patients will also have to cover 20% of the cost of PET or MRI scans. To put this into context, the average national price range for brain MRI scans is $1,600 to $8,400. PET scans can be as pricey as $10,700. And Medicare does not guarantee coverage for either, at times leaving patients to pay for them in full.

Unsurprisingly, Aduhelm is expected to be a massive burden on the American healthcare system.

According to a conservative estimate by the Kaiser Family Foundation, if Medicare covered the drug for 1 million Americans, spending on Aduhelm would exceed $57 billion in a single year – $20 billion more than was spent on all Part B drugs in 2019 combined.

Judging by the numbers alone, the U.S. healthcare system cannot afford to absorb Aduhelm, David Mitchell, founder of Patients For Affordable Drugs, told Salon. "It's a back-breaking drug for Medicare and for Medicare beneficiaries," Mitchell explained in an interview. "We're going to have to confront the fact that we can't keep paying whatever [Big Pharma] demands, because it'll just break the bank."

Matthew E. Shepard, Communications Director at the Center for Medicare Advocacy, echoed Mitchell in an email exchange, expressing concerns about the "palpable impact the very possibility of this drug being covered under Medicare has already had on Medicare premiums."

Asked whether they found the drug's effect on Medicare concerning, a Biogen spokesperson emphasized that "Alzheimer's care pathway is complex and underdeveloped."

"We anticipate that adoption of ADUHELM, like other novel treatments, will be gradual over many years, as system-readiness and diagnosis will take time, and we expect that only a fraction of the total eligible population will be treated with ADUHELM in 2022," Allison Parks, the Biogen representative, added.

Aduhelm's approval comes at a political moment in which outrage over high drug prices – and Congress' apparent unwillingness to lower them – has reached a fever pitch.

As it currently stands, Medicare is not legally allowed to negotiate Part B and Part D drug prices with drugmakers. That is why House Democrats have for the past two years touted the "Lower Drug Costs Now Act," which sets out to allow for Medicare negotiation and establish price caps based on international reference points. But because the bill lacks adequate support from Congress – even though 83% of the American public supports Medicare price negotiation – companies like Biogen have near-complete authority to charge whatever they wish for their drugs, even when their actual value to society is abysmal.

And abysmal it might very well be, critics say, in the case of Aduhelm.

According to a comprehensive report released by the Institute for Clinical and Economic Review (ICER), which specializes in assessing the clinical value of pharmaceuticals as compared to their market prices, Aduhelm should actually be priced no higher than $8,300 per year – nearly seven times less than what Biogen is charging.

RELATED: This Democrat got big money from Big Pharma — and turned against lower drug prices

David Whitrap, ICER's Vice President of Communications and Outreach, told Salon that the group's analysis of Aduhelm was "very unique" because ICER had "strong concerns just about the effectiveness of the drug" from the outset. "Usually, we're looking at an FDA-approved drug that has some sort of efficacy. And it's just more of a discussion around what a fair price is," Whitrap said in an interview. "Ultimately, we concluded that the clinical evidence was insufficient to show whether Aduhelm provides a net health benefit for patients. And that's an unusual evidence rating from ICER."

The group's poor evidence rating was largely rooted in Biogen's controversial use of "surrogate endpoints," proxy measures that are assumed to correlate with actual clinical endpoints. For Aduhelm, this meant measuring the presence of beta-amyloid plaque as a surrogate for cognitive decline – an approach that typifies just one of many in dementia research.

"Aduhelm was approved based on its demonstrated clinical effect in reducing amyloid plaque in the brain and the reasonable likelihood that removal of this plaque slows disease progression," company spokesperson Allison Parks told Salon.

In Biogen's first 2019 study, called "EMERGE," the company found that Aduhelm reduced the rate of cognitive decline (i.e., the presence of amyloid plaque) by 23%. In its second study, "ENGAGE," these results failed to re-emerge.

But critics say that even if administering Aduhelm causes a reduction in plaque, that doesn't necessarily mean the drug is preventing cognitive decline.

"I think all the evidence shows that when you reduce amyloid plaque, you don't see a clinical benefit," Harvard lecturer Dr. John Abramson, whose forthcoming book "Sickening" tackles Big Pharma and corruption, told Salon. "It's a very good hypothesis – when you find that people who have Alzheimer's disease are far more likely to have amyloid deposits – I think that's established. But that doesn't establish causation."

On a broader level, Abramson also noted that the existing relationship between the FDA and Big Pharma presents several inherent conflicts of interest – and these conflicts might raise eyebrows with respect to Aduhelm. For instance, the FDA receives a large portion of its funding from user fees, which are paid out by pharmaceutical companies to help cover the agency's regulatory overhead as part of the 1992 Prescription Drug User Fee Act (PDUFA).

According to an FDA fact sheet from November of last year, users fees comprised roughly 45% of the FDA's total budget. For human drugs like Aduhelm, that number is as high as 65%, which critics say can open the door for problematic back-scratching.

"[The FDA's] primary client is industry and their time targets," Abramson explained. "And there's a lot of pressure to meet the targets that have been agreed upon to receive that PDUFA money."

But the full extent to which Biogen may have pressured the FDA, if at all, remains shrouded in mystery.

RELATED: Pro-pharma Democrats kill bill to lower drug costs — advocates ask: "What did they get for that?"

According to a New York Times analysis, Biogen reportedly fostered a spirit of "close collaboration" with the FDA officials spanning back to 2019. STAT further found evidence that Biogen executives apparently leveraged backchannels with the agency months before the drug was pushed past the finish line.

Now, two House committees are looking into the matter. And, in July, the Department of Health and Human Services launched an internal probe into whether there was any impropriety following calls for an investigation by FDA Acting Commissioner Janet Woodcock.

It's unclear how long Aduhelm's development will be under federal scrutiny. But in the meantime, the drug is already forcing companies and government agencies to make tough decisions. In the private insurance industry, Bloomberg reported, numerous companies are refusing to cover the Aduhelm until more data is presented, deeming the drug as largely experimental. The Department of Veterans Affairs has likewise shot the drug down entirely, citing "the risk of significant adverse drug events and to the lack of evidence of a positive impact on cognition."

For its part, Medicare is still weighing a final determination as to whether – and how much – it will cover, even though the agency has already raised its premiums to build up cash reserves for coverage, according to CNN. "It's important to note that the Part B Premium reflects our actuaries' best estimates of future Medicare spending and the necessary reserves to ensure we can pay claims," a Center for Medicare and Medicaid Services (CMS) spokesperson told Salon.

"CMS will post a proposed NCD [national coverage determination] and decision memorandum within six months from the initiation of this NCD analysis," they added.

But if CMS ultimately agrees to cover the drug, Abramson said, it will run the risk of "pulling money out of our healthcare system for the kinds of things that we know are going to be more cost effective."

"The big picture here is that the biotech whiz-bang takes money away from basic healthcare," he added. "And in my opinion, that's why the United States – despite spending an excess of $1.5 trillion a year – is losing ground rapidly in terms of population health, compared not just to the other wealthy nations, but to all the nations."