"This is who they are," said the Minnesota Democrat. "And we have to be able to stand up to them." 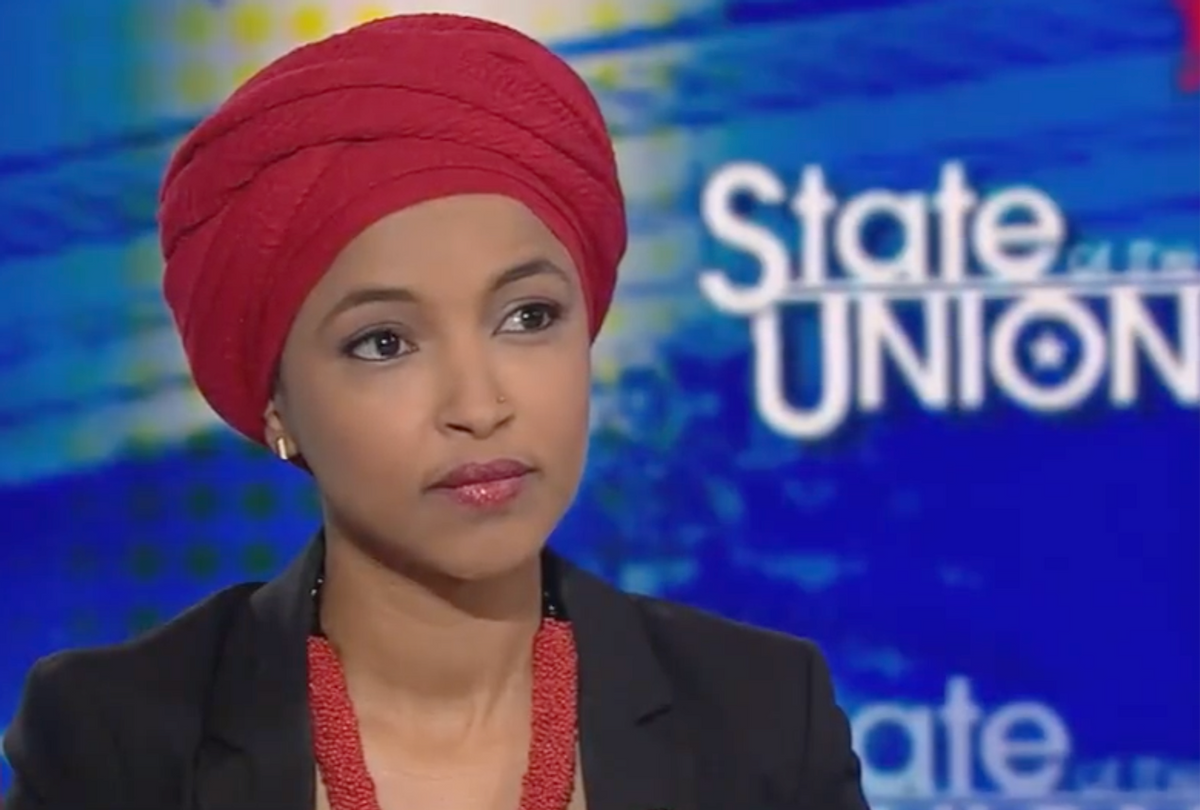 Rep. Ilhan Omar, D-Minn., during an interview on CNN's "State of the Union." (CNN/Screengrab)
--

Congresswoman Ilhan Omar castigated House Minority Leader Kevin McCarthy on Sunday morning, calling the Republican leader both "a liar and a coward" for refusing to condemn recent Islamophobic comments and behavior by Rep. Lauren Boebert, a freshman Republican from Colorado.

Speaking with CNN's Jake Tapper on "State of the Union," Omar—who Boebert joked about being a suicide bomber and repeatedly says is a member of the "Jihad Squad" due to her Muslim faith—said that the GOP leader has shown his true colors as fellow members of Congress have demanded Boebert be censured and stripped of her committee assignments due to her hateful rhetoric.

After watching footage of McCarthy on Friday defending Boebert and explaining why no public condemnation of her was warranted from his perspective because she had already apologized, Omar said, "McCarthy is a liar and a coward."

"He doesn't have the ability to condemn the kind of bigoted Islamophobia and anti-Muslim rhetoric that are being trafficked by a member of his conference," she added.

Asked why that is, Omar responded, "Because this is who they are. And we have to be able to stand up to them. And we have to push them to reckon with the fact their party right now is normalizing anti-Muslim bigotry."

Asked to describe how many death threats she has received recently based on her faith, Omar told Tapper it was "too many to count."

When Tapper asked Omar if she fears for her life, Omar responded by saying that while she and her staff do have a "general fear" for their own safety it is also the safety of the wider community that is vital to understand.

"We constantly hear from so many people across the country where there are children whose hijabs have been pulled off—my own daughters have experienced this. I have experienced this as a young person in this country. And we know that kind of language this member is using leads to," she continued, referring to Boebert.

Speaking off specific death threats directed at her, including a recording of one she recently played during a news conference, Omar said, "We know that the kind of man who leaves that voicemail for a member of Congress is not going to spare a young Muslim girl when he sees her taking the bus or walking home from school or when he runs into her in the grocery store. So we have a responsibility as leaders. Words matter. And words can cause violence. And [Boebert] knows that the language she's using—the audience that she's using it for—is going to incite violence against myself and my community."

Since Boebert's comments about Omar surfaced last month—and as subsequent exchanges and an aborted phone call between the two last week in which Omar said she was forced to hang up because it was so "unproductive" and hateful—numerous fellow lawmakers and outside groups have come to Omar's defense and demanded that Boebert be held to account.

On Tuesday, Rep. Jamaal Bowman (D-N.Y.) urged the House Democratic leadership to remove Boebert from her committee assignments and take "all other appropriate measures" in response to her continued bigoted attacks on Omar.

That GOP leaders like McCarthy have refused to condemn the behavior has stirred deeper outrage.

In a series of tweets on Friday, Rep. Alexandria Ocasio-Cortez (D-N.Y.) slammed McCarthy and other GOP leaders for their refusal to condemn Boebert or support the call for her committee assignments to be stripped.

"It's embarrassing that there is any hesitation on this," said Ocasio-Cortez. "How can we have different consequences for different kinds of bigotry or incitement? This should be treated equally and consistently. Incite against a member and you're stripped. End of story. She refuses to even apologize."

"It's a pretty simple question: does the House accept violent Islamophobia or not?" she continued. "We should feel ashamed every time Congresswoman Omar or anyone is forced to defend themselves against threats in their workplace alone bc the institutions they serve in won't protect them. It's messed up.