Yes, a largely white jury convicted Arbery's killers, and that's historic. It should also be a source of shame 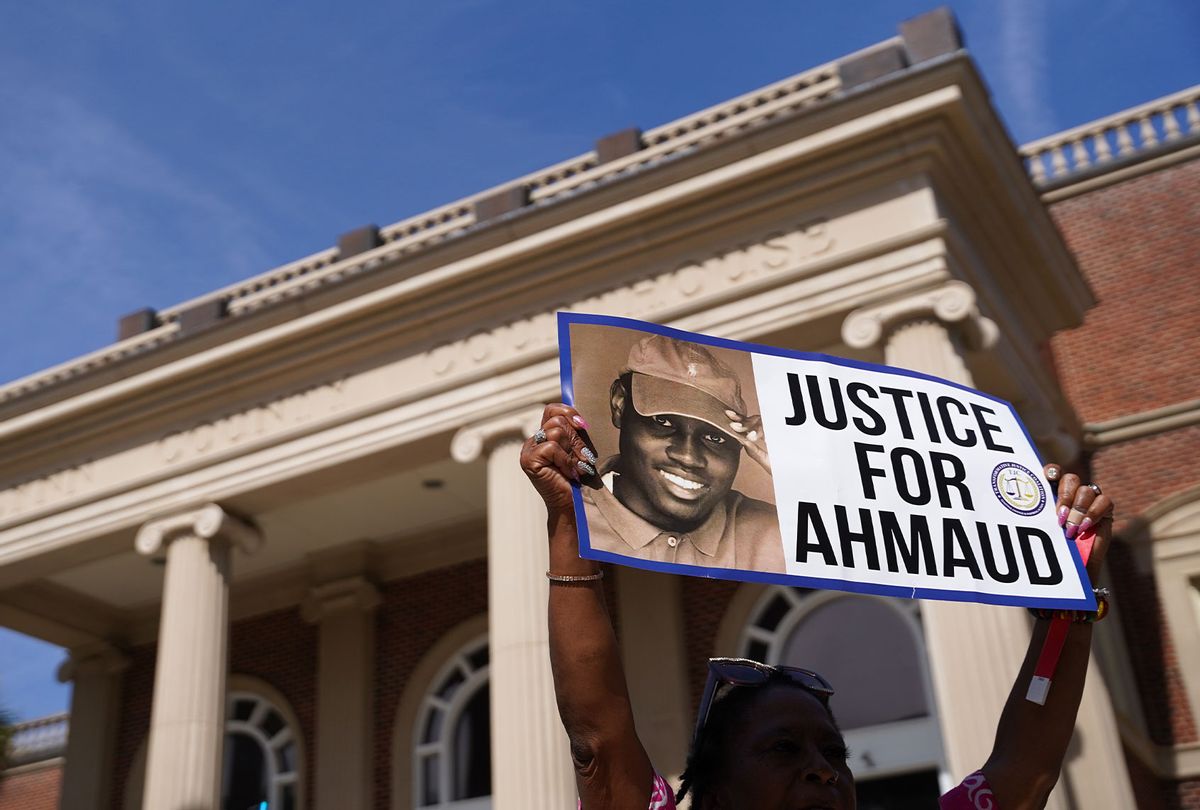 A demonstrator holds a sign at the Glynn County Courthouse as jury selection begins in the trial of the shooting death of Ahmaud Arbery on October 18, 2021 in Brunswick, Georgia. Three white men are accused of chasing down and murdering Arbery in southeastern Georgia last year. (Sean Rayford/Getty Images)
--

It was a 21st-century version of a Jim Crow-era lynching. Ahmaud Arbery was stalked, hunted down and executed in the street by three white men on Feb. 23, 2020. The men claimed they suspected Arbery of being a thief or burglar, but he had committed no crime and was unarmed. He was a Black man who went running in the predominantly white residential neighborhood of Brunswick, Georgia.

The three white men who chased Arbery through the streets of Brunswick were Travis McMichael — who shot and killed Arbery — his father, Greg McMichael, and their neighbor, William "Roddie" Bryan. They attempted to claim self-defense, saying they were carrying out a citizen's arrest of a criminal suspect. The McMichaels chased Arbery in a pickup truck. They cornered him. Travis McMichael would then shoot Ahmaud Arbery three times.

This was a dubious defense on strictly legal grounds, and considerably undercut by the evidence. In a preliminary hearing, investigators said that Travis McMichael used a racial slur to describe Arbery after the fatal shooting. While evidence of the McMichaels' racist views played no role in the criminal trial, it may well become important in their sentencing, when prosecutors may seek to prove the murder was a racial hate crime.

In closing arguments, Greg McMichael's defense attorney, Laura Hogue, sought to rob Ahmaud Arbery — who had already lost his life — of his human dignity. Summoning up bestial white supremacist images of Black men, she told the jury, "Turning Ahmaud Arbery into a victim after the choices that he made does not reflect the reality of what brought Ahmaud Arbery to Satilla Shores in his khaki shorts with no socks to cover his long, dirty toenails." Exactly how the condition of Arbery's feet related to his killing she did not explain. Facing a predominantly white jury in exurban Georgia, perhaps she felt she didn't have to.

In any case, the defense strategy did not work. On Wednesday, November 24, the jury of 11 white people and one Black person convicted Bryan and the McMichaels on various charges, including murder. All three men face mandatory life sentences, potentially without parole.

Ahmaud Arbery's family has some closure. But the conviction of his killers should not be mistaken for justice. Real justice would consist of Arbery, and other Black people, not facing the threat of random lethal violence for being in the "wrong" place. Many Americans are responding to the Arbery verdict with some version of "Well, at least the system worked this time." Prosecutor Linda Dunikoski said much the same thing after the verdict, telling the public and the media, "The jury system works in this country. And when you present the truth to people and they see it, they will do the right thing."

Such language reveals an unintended truth. As shown by its routine treatment of Black and brown people, the "system" is broken beyond repair.

What was required for America's criminal justice system to "work this time"?

There was video footage of the McMichaels and Bryan hunting down Ahmaud Arbery as though they were reenacting scenes from a horror movie. That footage was witnessed millions of times on social media. There were weeks of protests demanding a proper investigation of Arbery's murder. To her immense credit, prosecutor Dunikoski conducted a masterclass, demolishing the three men's claims of self-defense. Her tactics and strategy will likely be taught in law schools.

For the most part, the facts of the case were not in dispute, only the intentions and motivations of the defendants. Still, it must be seen as extreme good fortune that no member of the nearly all-white jury sided with Bryan and the McMichaels to any significant degree. (Travis McMichael was convicted on all nine counts, Greg McMichael on eight of nine and Bryan on six of nine. All three were convicted of felony murder, by far the most serious charge.)

And yet, even with all of these factors, conviction was by no means guaranteed, which is why Black America awaited the outcome with great anxiety.

In all, the saga of Ahmaud Arbery's murder and the resulting trial is another reminder of how race is lived in America (and throughout the West) with different realities and divergent experiences across the color line. For many white Americans, the Arbery murder is to be condemned based on abstract norms of human decency and right and wrong. Taking the long view of American history, it is also a recent development. If many white people now perceive racist violence against Black people as subject to criminal punishment, that is no small amount of progress.

That progress, of course is not shared across divides of party and ideology. Public opinion and other research have consistently shown that Republicans and other white conservatives are more likely to feel racial resentment, if not outright racism, against Black people and other nonwhites than are white Democrats.

That racial animus manifests in many ways, most obviously in how white conservatives support police brutality (explicitly or otherwise), tend to believe that police treat Black and white people the same way, and in general embrace inherently racist "law and order" policies. Social scientists have repeatedly demonstrated that those policies serve as a proxy for racial resentment and hostility, particularly toward Black people.

RELATED: "The Sum of Us" author on what racism costs white people and the lie of a zero-sum racial hierarchy

We also should not ignore that these attitudes exist in a current political and social context where white Republicans and other "conservatives" — especially Donald Trump's supporters — have convinced themselves, in the face of all evidence, that white people are the real "victims" of racism in America.

The very idea of a random white man being hunted down and killed by a group of Black or brown people — be they police or self-appointed neighborhood watchmen or "concerned citizens" — who accuse him of an imaginary crime and act out a racist action-movie script is so far-fetched as to be utterly nonsensical.

By comparison, for Black Americans, the lynching of Ahmaud Arbery is an intimate, personal experience as well as a traumatic manifestation of cultural memory, an example of the real-life horror stories that are passed down across the generations as a type of survival training.

The oft-discussed "talk" that Black parents and other caregivers must give Black children about how to survive encounters with the police (or other white people who hold literal power of life and death) is often a history lesson as much as it is practical advice. There is the nightmarish but unfortunately real vision of white lynching parties in pickup trucks and muscle cars, chasing down Black folks while flying their Confederate flags (or, these days, Trump flags), while brandishing guns, howling and screaming racist obscenities.

As graphic novelist and author Nate Powell explains in his comics essay "About Face", it is no coincidence that the Republican fascists and their foot soldiers use modified pickup trucks as literal weapons against their "enemies" and as symbols of their "real American" values and fake patriotism.

One common thread of this experience, be it the extrajudicial racial violence directed against Ahmaud Arbery or more quotidian encounters with day-to-day racism, is an attack on Black people's inherent human worth.

Are we still deemed to be three-fifths of a person? Are we "respectable" enough? Do we hide our Black genius and other gifts as to not make white folks uncomfortable? What happens when a white person (or others who identify with Whiteness) decide that they have the "right" to stop or harass a Black person? Or where such a person wants, as appears to be the case in the Arbery tragedy, to live out their fantasies of being a slave-catcher in 21st-century America?

Legal scholar Marjorie Cohn writes on this at Consortium News:

Beginning in 1704, slave patrols empowered every white person to control the movements and activities of every Black person. Citizen's arrest laws date to 13th century Europe and were later brought to the British North American colonies. In 1863, Georgia adopted a citizen's arrest statute to replace the slave patrols with another avenue to vigilante "justice." The law deputized any white Georgian to seize and detain any Black person on suspicion of being an escaped slave.

Georgia's citizen's arrest law that the defendants are relying on in this case stated that "a private person may arrest an offender if the offense is committed in his presence or within his immediate knowledge." Although they never mentioned it to the police, the defendants are now seeking to use the citizen's arrest law to shield them from responsibility for racially profiling Arbery….

Cohn also signals here to an exclusive type of imagined "white freedom": the freedom to humiliate Black people (or members of other marginalized groups) without consequences.

We see this in America's public discourse when, after a Black person is unjustly killed by the police or a white vigilante, one common deflection is to claim that this person would be alive if he hadn't tried to run away. There is also the question, "Why didn't he (or she) just follow directions and cooperate?"

RELATED: Are Democrats the "real racists"? Well, they used to be: Here's the history

Such prevarications offer an updated version of Chief Justice Roger Taney's infamous statement in the Dred Scott case that Black people have no rights that the white man is bound to respect. When black people say no or otherwise exercise their human rights and civil rights by resisting humiliation and domination, the consequence can be a literal death sentence, as it was for Ahmaud Aubery.

In the new book "Chasing Me to My Grave," artist Winfred Rembert shares a memory about growing up in rural Georgia during the 1950s and the Jim Crow terror regime:

There are no more laughing barrels in America, at least not to my knowledge. But in the Age of Trump and beyond, the white supremacist values and beliefs that barrel represented are being earnestly resurrected. President Barack Obama experienced such treatment. Vice President Kamala Harris is experiencing it now. Everyday Black folks, whatever their socioeconomic class or background, must always be wary of today's equivalent of the laughing barrel.

Ultimately, the lynching of Ahmaud Arbery is a tragic example of how the color line is a story both of continuity and change.

His murderers were found guilty and will be punished for their crimes. That is meaningful. But there are many stories like Ahmaud Arbery's in America — some we already know and others we may never hear. Many such killers have gone free, and some are still walking around free today. That too is "the system" in America, working precisely as designed.