White supremacy keeps rebranding itself — but the song remains the same 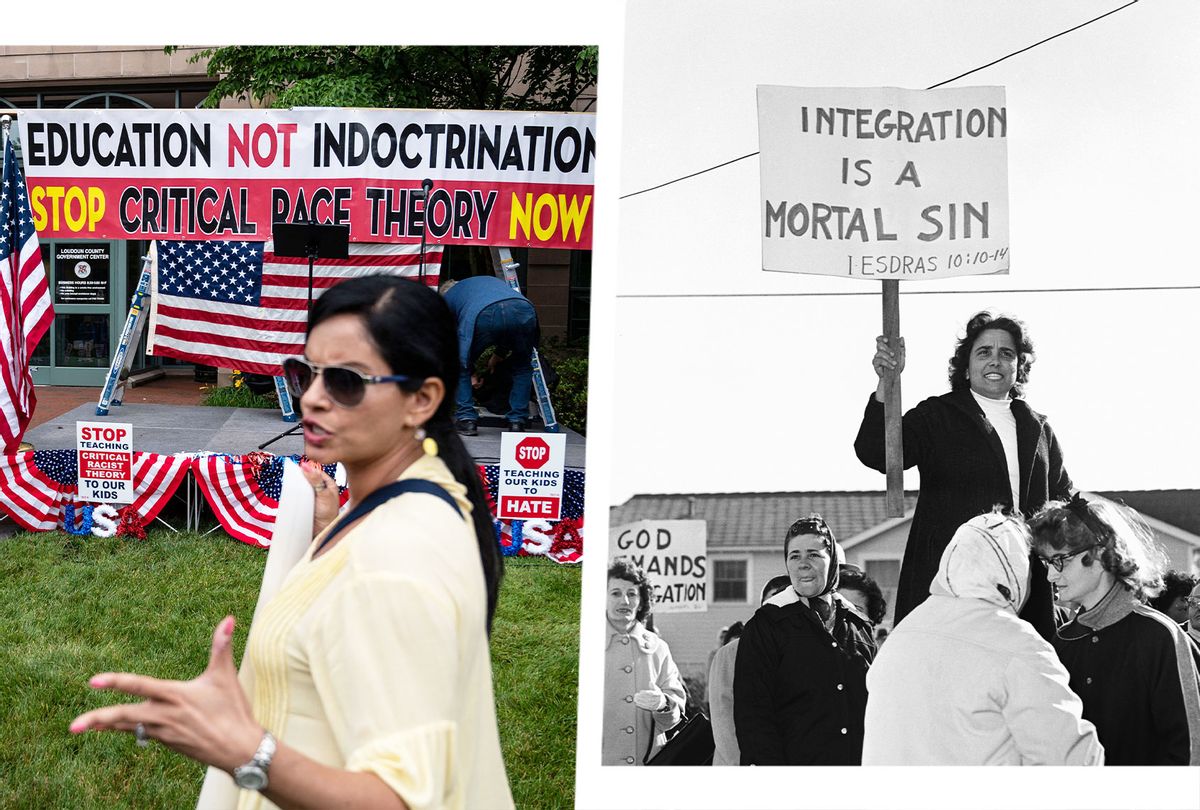 People talk before the start of a rally against "critical race theory" (CRT) being taught in schools at the Loudoun County Government center in Leesburg, Virginia on June 12, 2021. | Mrs. Lee Hooks and other white housewives demonstrate against planned desegregation at William Franz Elementary School in New Orleans. (Photo illustration by Salon/Getty Images)
--

Many of the same people now raging about "critical race theory," who want to ban any discussion of America's history of racism and the color line in the public schools, would have been outside that school on that morning, heckling or threatening Ruby Bridges and determined to stop desegregation.

Today's Republican Party has a love affair with the Jim Crow era. There's nothing truly new about its racist moral-panic attacks on "critical race theory." They are just another manifestation of decades-old or centuries-old narratives of white supremacy, updated and recycled for the 21st century.

As seen in the Virginia gubernatorial election and across the country, the Democrats have shown themselves generally unable or unwilling to fight back effectively. Democrats continue to believe, incorrectly, that the truth will serve as a shield in their battle against the Jim Crow Republican Party and other neofascists.

Of course it is true that what Republican Party and its propagandists are calling "critical race theory" has little or nothing substantively in common with the actual advanced scholarly framework of that name, which is focused on race, inequality and the law.

And no, critical race theory has nothing to do with making white children feel "guilty".

RELATED: "Critical race theory" is a fairytale — but America's monsters are real

And yes, of course responsible parents of all races and colors should want their children to understand the realities of racial inequality in American society and history, so that they will be better citizens and better human beings — and are better equipped to navigate and succeed in an increasingly diverse country and world.

Yes, of course it's true that the Jim Crow Republicans and their propaganda machine are lying to the American people — and specifically to white parents — about all these things.

In a recent conversation here at Salon, political scientist and strategist Rachel Bitecofer explained the Republican weaponization of "critical race theory" — and why the facts don't much matter:

It doesn't matter if a random Republican voter can define what critical race theory is — he knows what it means. The Republicans knew what that man would know when they used that language. "Critical race theory" means that we are going to protect you from having to feel guilty about being white, and for your kids having to feel guilty for being white. For having your white hegemonic power challenged in this more diverse America….

It's about invoking this white backlash, resentment and grievance politics. That's really the undercurrent of the last decade of Republican politics. But it's also about telling that small number of voters you can convert over to your side not to vote for the Democrats because they are going to make your kids feel horrible.

To prevail in this struggle against the Jim Crow Republicans and their racist moral panic, Democratic leaders (and voters) need to accept two basic facts.

First, white supremacy is built on the lie that those individuals and groups deemed "white" are superior to "Black" and "brown" people. To that end, white supremacy mandates that the feelings, emotions, beliefs, interests, needs and goals of so-called white people must supersede those of everyone else. Throughout its existence, American society has effectively been organized around those principles.

Second, conservatism and racism have become functionally identical. The Republican Party is the world's largest "white identity" organization. Embracing both white supremacy and fascism, the so-called conservative movement now functions as a political religion in which faith is far more important than facts and reason.

Unfortunately, to this point the Democrats are wasting their time throwing punches at hallucinatory swamp gas about "critical race theory" and other absurdities, rather than mobilizing their voters in what is becoming an existential battle for the future of American democracy.

The Republicans' attack on critical race theory is almost like a haunted record player. Some unfortunate person finds the record player and turns it on. The scratchy old song from the 19th century that plays first is about the threat of "Negro domination", the "colored vote," and "black rapists" and other criminals who are going to attack white women, invade "safe" neighborhoods and destroy "respectable" white society. Over the decades, that record player morphs into new forms of media, and the song it plays is constantly updated. But the underlying rhythm, and the basic message, remain the same.

White conservatives, and too many of their Black and brown mercenary sycophants, know the song, in whatever form they may hear it. They love it; they dance to it; they sing along compulsively. But that song is killing them almost as surely as it destroys the lives of Black and brown people.

That is not hyperbolic or strictly a metaphor. Public health experts and others have repeatedly shown that racism and white supremacy, both by way of public policy and personal choices, negatively impacts the lives of white people in America.

Youngkin's "racially coded" language about the role of (white) parents in schools and "education," as well as his direct mentions of "critical race theory." were a key factor in his victory over Democrat Terry McAuliffe.

School districts that experience "racial" demographic change tend to see greater white backlash against the supposed teaching of "critical race theory," and increased opposition to diversity efforts more broadly. This reflects a larger pattern: Recent polls show that an overwhelming majority of Republicans (80%) oppose the premise that America's history of racial injustice and inequality should be taught in schools.

This specific research about Youngkin's victory in Virginia reflects a continuity in white racism and other forms of white racial animus in America. News images of enraged white women and men, threatening violence at school board meetings over the imaginary threat of "critical race theory," mirror what so many Black children and their parents and allies encountered during the civil rights movement and the struggle for integration.

The language of "parents' rights" now being deployed by Republicans and the larger white right is simply an updated version of much older white supremacist slogans and threats: the importance of "states' rights," the need for "local control," the danger of "outside agitators" and the doctrine of "separate but equal."

There are other parallels as well. White citizens' councils and other such civil society organizations served as the "polite" and "respectable" face of the Jim Crow terror regime. In practice, these organizations worked with white terrorists such as the Ku Klux Klan to maintain white domination over Southern life and American society.

White right-wing evangelical churches and religious communities fervently resisted the civil rights movement — and today, they stand against the bogeyman of "critical race theory," specifically, and the existence of multiracial democracy more generally.

As in the age of Jim and Jane Crow, there is a network of rich and powerful right-wing libertarians and other conservatives funding and organizing the campaign of moral panic over "critical race theory." Those people see this campaign as a way of defunding and ultimately destroying public schools, on the road toward privatizing every aspect of American society in order to create a totally unregulated corporate oligarchy. Allowing for some minor or cosmetic differences, Southern plutocrats and other white elites of the Jim Crow era (as well as the antebellum slave-owning aristocracy) shared many of those same values and goals.

One of the dominant media narratives after the Virginia election holds that Glenn Youngkin should be understood as "Trump-lite," and offers a more "acceptable" or "respectable" version of Donald Trump's overt fascism and racial authoritarianism. But we should not forget that white supremacists took off their Klan robes and donned suits and ties in the 1970s and '80s, repackaging themselves as "white nationalists" or simply as "conservatives" and "populists" who stand for "traditional" values and the "real America."

Youngkin has modified the tenor and tone of the Trump message, but the underlying values and goals are largely the same. Umair Haque writes about this in a new essay:

So how did Youngkin win? He triggered White Rage. He sent white Virginians into a frenzy. They literally lost their minds — they stopped thinking. Nobody asked: "Wait, does this man have a plan, an agenda?" It didn't matter. What did? Supremacy did. White Virginians voted the way we might have expected pre-civil war Southerners to. Whipped up into a moral panic about … nothing real. Youngkin told them their kids were under attack — nobody's attacking white Virginia's kids — and they believed him. They believed him so much that Youngkin therefore won without a formal political agenda of any kind whatsoever.

That should frighten you, because the next part is: he did have an agenda, and he does have one. He told white Virginians the very same lies that Trump did. All those minorities and immigrants and foreigners are to blame for your woes. The soil belongs to you, because you are true of blood and pure of faith. Everyone else? Gay, immigrant, Jew, Black, Latino? They're interlopers, aliens, who don't belong here, and don't deserve the same rights and powers you have. That is why Virginia's kids weren't to be educated about slavery — because just going that far triggered White Rage in Virginians.

Haque argues that "Youngkin's agenda is fascism," however lightly disguised, calculated to appeal to white hatred and make members of minority groups feel "shock and fear, unwelcome" in their own communities. He concludes:

And perhaps most importantly, white supremacy and racism are taught and learned behavior(s) that are passed along intergenerationally. It is of little doubt that many of the white parents who are now raging against the Jim Crow Republicans' "critical race theory" bogeyman are the direct descendants of white parents and other family members who did the same thing in response to school desegregation and the larger Black Freedom Struggle and civil rights movement those years ago.

The color line in America is a story of continuity and change. Many members of America's commentariat and political class — especially those who remain invested in the narratives of whiteness — emphasize change and minimize continuity. That serves to frames white supremacy and racism as aberrations — outliers that should be regarded with shock and surprise, rather than as an enduring status quo that demands radical action.

For example, many white people in America expressed shock and outrage at the police murder of George Floyd, but continue to oppose the types of systemic and institutional reforms necessary to purge white supremacy from American society. The psychological wages of whiteness, in their various forms, reinforce that type of behavior through a belief in the inherent goodness of American society and white racial innocence. Both beliefs are based on a fictional understanding of reality.

Ultimately, white supremacy and racism are like the roots of a tree. Too many people are angered or outraged by the poisonous branches and leaves instead of focusing on how and why they grew that way. It will be hard and difficult work to uproot that tree. But that will not happen as long as so many white Americans who complain about that dangerous tree still take refuge in its shade.