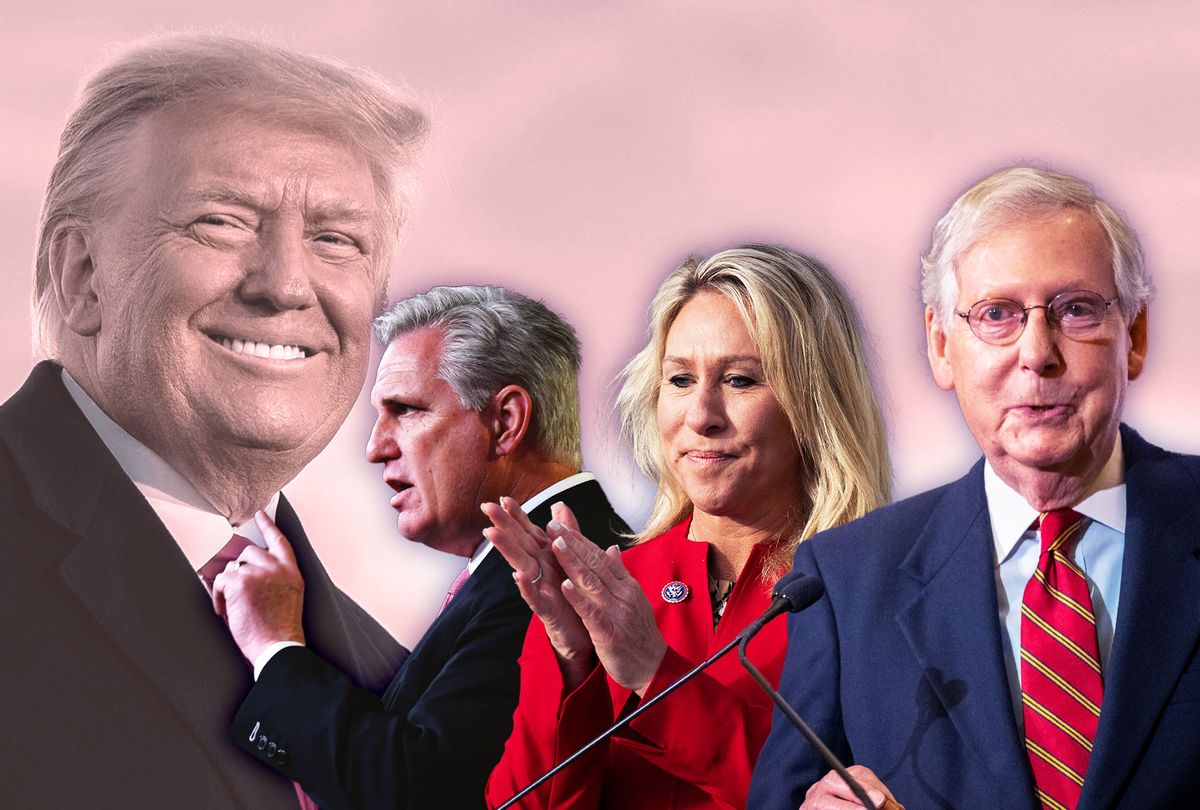 Last week, Senate Republicans filibustered the Freedom to Vote Act, refusing to allow it to reach the floor for debate, let alone an actual vote. Their goal was to prevent Black and brown people, as well as other Americans who support the Democratic Party, from participating in the polity as full citizens.

Moreover, the Republican filibuster of the Freedom to Vote Act — itself a compromise bill hatched by Sen. Joe Manchin of West Virginia, in the delusional belief it would attract bipartisan support — was effectively an endorsement of the ongoing coup against American democracy.

For all intents and purposes, today's Republican Party, encouraged by Trumpism, has dug up the putrid corpse of Jim Crow and married it. Refusing to allow a vote on the Freedom to Vote Act is, in a sense, a perfect metaphor or synecdoche, since Republicans are also engaged in a nationwide campaign of voter exclusion, voter suppression, partisan and racial gerrymandering and other means designed to shrink the electorate with the goal of ensuring one-party rule.

It's no mystery why this is happening: Republican policies are overwhelmingly unpopular with the American people. In a healthy majoritarian democracy, Republicans would be decisively voted out of power. The Republican Party's solution? Select their own voters and exclude all others from the franchise.

Moreover, today's Republican Party cannot consistently win free and fair national elections in a country that is rapidly becoming more "racially" and ethnically diverse. As seen on Jan. 6 and other moments, Republicans are now willing to condone or even encourage right-wing political violence as a means of obtaining and keeping political power. To wit: Public opinion polls and other research indicate that tens of millions of (white) Republicans and Trumpists would support terrorism in order to return Donald Trump to power and protect their "traditional" version of America.

As historian Nancy MacLean and other experts have exhaustively documented, today's Republican Party and the larger right-wing movement are contemptuous towards democracy. To that end, they have worked for decades to replace American democracy with a right-wing authoritarian corporate state — a mixture of oligarchy and theocracy — in which profits and property reign supreme over civil and human rights.

RELATED: Why are Democrats afraid to use their power? American democracy depends on it

Too many public voices still claim to be "shocked" and "surprised" by the Republican Party's campaign to overturn American democracy. In reality, it is a dangerous error to treat the Jim Crow Republicans as some type of aberration or exception. In many ways, the white right's large-scale war against multiracial democracy is the status quo ante reasserting itself, amplified and empowered by the Age of Trump and ascendant fascism.

The United States is existentially stained by its founding as a racial-settler colonial state where genocide against indigenous peoples and the enslavement of Black people were central to the formation and expansion of the country.

American democracy, at its inception, was inherently racial — a Herrenvolk democracy in which chattel slavery and the oppression of other nonwhite groups created exclusionary boundaries that helped to create political and social cohesion for "white society."

As philosopher Charles Mills and other scholars have demonstrated, white elites as a group — including the founders — saw little contradiction between the continued existence of slavery and other forms of racial exploitation and their claims about "liberty," "democracy" and "freedom." On the contrary, those conceptions were predicated upon the violent exploitation and exclusion of Black people and other nonwhites people from the polity.

Like the Confederates, today's Republican Party believes that white men with property should dominate society, that women should be confined to the domestic sphere as de facto property, that the country should be ruled by "Christian" values, that white privilege and white power are the "natural order of things" and that capital should dominate all areas of social and political life. Today's Republican Party also believes that "real Americans" should have a monopoly on violence and be freely empowered to use it against the Other, and that attempts to create social democracy are antithetical to capitalism and the "American way".

As revealed by public opinion polls and other evidence, white Republicans and Trump supporters (along with too many nonwhite people who yearn to gain access to honorary whiteness) increasingly believe that "white America" is under siege from black and brown people. Such beliefs serve to normalize and encourage preemptive violence as "necessary" acts of "self-defense." These "white genocide" fantasies go back centuries in America. During the era of slavery and then Reconstruction and then the Black codes and Jim Crow, white leaders repeatedly issued warnings about the threat of "Negro domination," which would somehow occur if the right to vote, along with other human and civil rights, were expanded across the color line.

The Senate filibuster itself is a carryover from the 19th century, frequently used to protect the institution of chattel slavery and then, after the Civil War, to ensure that Black people were stripped of virtually all their supposed rights of citizenship. The language and logic being deployed by Republicans and their propagandists today, to defend their attempts to keep Black and brown people from voting, echo almost verbatim those used during the century-long Jim and Jane Crow reign of terror.

In this moment of crisis, it is critically important to understand that America's multiracial democracy is still very new and highly contingent and vulnerable to being overthrown by the Republican fascists and their allies. Black Americans have only had the right to vote, as a matter of law, since 1965. If Black people's voting rights were a human being, that person would only be 56 years old — not yet ready to collect Social Security.

Nothing about America's multiracial democracy is guaranteed, least of all its continued survival.

Like many people of my generation, I grew up enamored with the "Schoolhouse Rock!" cartoons. I have seen every episode many times. I knew the words to the songs by heart, and could sing along when snippets of "Schoolhouse Rock!" appeared between episodes of "G.I. Joe," "The Transformers," "Voltron" or "Thundarr the Barbarian."

In these dark days of America's democracy crisis, I have often thought about the beloved episode of "Schoolhouse Rock!" that explains how a bill becomes a law. I see "Bill" walking up the stairs of the Capitol, so happy to visit the U.S. Senate. But in this alternate version of the original episode, Bill is attacked by a mob of enraged white people in MAGA gear, carrying Confederate flags and other fascist emblems. The Trump hooligans beat Bill mercilessly. He is then dragged down the Capitol steps, spat upon and left crumpled and lifeless, while the MAGA horde celebrates their victory.

To the Jim Crow Republicans, the legislative process that Bill once represented is irrelevant now — democracy is a hollow farce, and their leader's word is the only law.

More Salon coverage of the Republican Party's war on democracy: