GOP wonder boy tells on himself: Cawthorn calls on (white) women to do their duty by raising little fascists 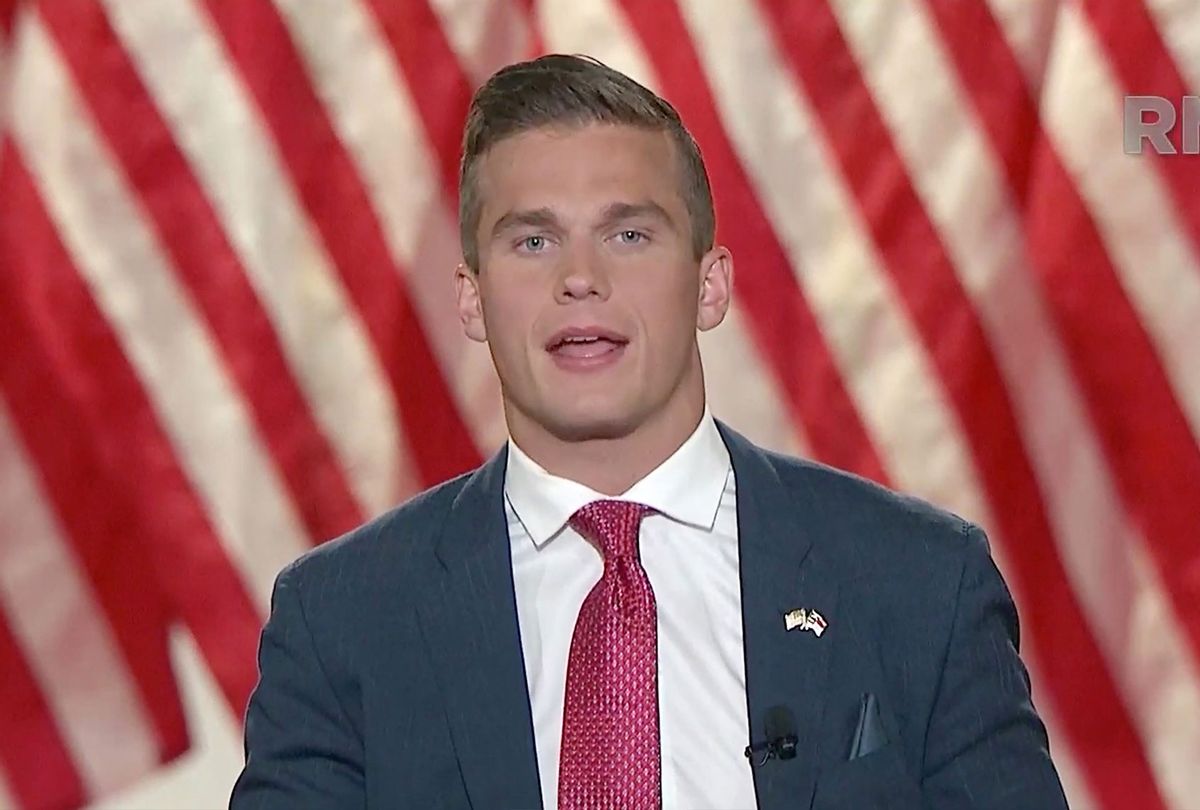 When they keep telling you who they really are, believe them. Unfortunately, too many Americans are still in a state of denial, five years or more after Donald Trump and the Republican fascists dropped the mask and revealed their true intentions.

If America's democracy crisis is a fever, it shows no sign of breaking. Indeed, the normalization of political and social deviance has taken a firm hold among tens of millions of Americans who support Trump and the Republican-fascist movement — and their numbers keep growing.

But the Trump phenomenon is not the root cause of what's wrong with America: it reflects a much deeper political and societal sickness.

Last week on Twitter, Dr. Bandy Lee, co-editor of the bestselling book "The Dangerous Case of Donald Trump," used powerful language to describe America in this moment: "We know that, when the sewage system is not cleaned up, it becomes a breeding ground for disease. It is the same for society: when the political and economic systems are not cleaned up, it becomes an environment for mental pathology to thrive."

No one is draining the sewers; Republicans and their followers want to wallow in them. To wit: Consider Rep. Madison Cawthorn, a North Carolina Republican and Trump loyalist, a believer in the Big Lie and supporter of the right-wing coup attempt of Jan. 6.

He said the following in a recent speech, as reported by the watchdog organization Right Wing Watch:

After this remarks were met with widespread criticism Cawthorn's spokesman offered the following excuse-making response: "In the context of his speech Congressman Cawthorn was urging parents to raise their sons as strong, godly, men who are warriors for truth and morality. Monsters and lions, not wimps and sheep."

During his speech, Cawthorn tried to cloak his call for breeding sociopathic white men with claims that his primary concern was about declining testosterone rates. In reality, he is embracing and encouraging an ideal of (white) fascist motherhood.

RELATED: What's destroying democracy around the world? At least in part, misogyny and sexism

In this call for raising up "monsters," Cawthorn was being "honest" far beyond his conscious intentions: Raising monsters for the fascist movement is one of the main goals of today's Republican Party and its "family values."

Indeed, Cawthorn's speech was a type of "teachable moment" about the role of gender in today's Republican fascist movement.

In their 2019 journal article "Demographic Fever Dreams: Fragile Masculinity and Population Politics in the Rise of the Global Right," scholars Banu Gökarıksel, Christopher Neubert and Sara Smith explore the relationship between right-wing nationalism and what they call "hegemonic masculinity" in a variety of contexts, including white nationalism in the U.S. and Western Europe, Hindu nationalism in India and Sunni Muslim nationalism in Turkey. In these nationalist narratives, they write:

the chaotic diversity of a multicultural world and the messiness of women and femininity are both backdrop and adversary in a story line centering strength and the masculine hero as the true protagonists of all stories. Here, the centering of one man as savior is not a fluke, a distraction, or a sideshow but is critical to the functioning of the dream.

The authors further explore the relationship between a particular type of white masculinity, neofascism and political violence in the American context:

As demographic fever dreams, these narratives center white masculinity as crucial to current right-wing populist rhetoric in the United States and locate threats to the nation in nonwhite, nonmale, and nonheteronormative bodies while seeking purification and power through a series of violent technologies. This technique of power renders class irrelevant, uniting white Americans across class divisions through an embodied fear of the toxic other and sustaining that fear through the constant introduction of new fever dreams. Trump's "defensive obsession with his embodied masculinity" reveals that gender is central to the feverish panic that is intended to lead to the inevitable conclusion that only Trump's exaggerated masculinity can save the nation from racial and moral decline.

Authoritarian leaders like Donald Trump, India's Narendra Modi or Turkey's Recep Tayyip Erdoğan, they write, perform a specific version of masculinity that is both strong and weak, rooted in "the perception of a strong political leadership" but also in "a sense of grievance and loss ... that often relies on a corollary femininity in need of protection."

That generally fits with the work of other leading scholars of fascism and authoritarianism, who have emphasized the role of toxic masculinity in right-wing populist movements.

In a widely-read 2019 essay for NBC News, David Futrelle drew connections between anti-immigrant views, racism and misogyny, seeing all of them as connected to deep insecurities:

What is often overlooked in discussions of the paranoid far-right fear of cultural and racial "replacement" that pervades anti-immigrant rhetoric around the world is its deep connection to a misogynist backlash that has also been growing on the internet for the past decade. The fear of immigrants — at a time when undocumented immigration in the United States, despite a recent short-term uptick, is near historic lows — isn't just driven by racism. It's also driven by the same sort of insecurity about masculinity that underlies the so-called Men's Rights Movement and the increasingly dangerous and self-destructive cult of self-described "involuntary celibates," or incels.

These men, most of them white, fear that their cultural, political, and economic supremacy is being undercut by women and people of color — even in a country in which the faces of the most powerful are still overwhelmingly white and male. …

But many men in the "alt-right" seem more concerned about a different sort of sexual threat from these "invaders," worrying less about rape than about white women choosing to have sex (and possibly children) with "alpha males" who aren't white.

In the white right-wing imagination, women have a very specific role as mothers and wives whose first responsibility is to "support" their husbands and manage the domestic sphere, where of course they will raise the next generation of white children. Among avowed white supremacists and other racial authoritarians the "service" roles of white women are made even more explicit:

Journalist Seyward Darby, author of the 2020 book "Sisters in Hate," explained the "pro-natal" orientation of white nationalism in an interview with the Cut:

The whole narrative is that white America is under threat and you should have as many white children as you can. Nazis gave women medals based on how many children they had. ... But the much more outward facing layer is that women are seen as bridges who can communicate with the mainstream. There are some who say the vilest things imaginable. But there are a lot who say, "We just want to love our heritage. We just want to love our children. Look at me, I'm just a nice white woman trying to live her life. What could be so bad about that?" ...

I think that women in this space kind of go back to the idea of motherhood as cherished and unassailable. White-nationalist women are saying motherhood doesn't have to be sullied by the muck of feminism, the workplace, and multiculturalism. You can just focus on being a cherished, hardworking, domestic goddess. ... The idea of whiteness and white civilization under siege by "demographic change", black and brown people, Muslims, "illegal aliens" and other "invaders" has long been a source of threat, paranoia, and anxiety by "white society" in the West. At present, what were formerly the obsessions of fringe white supremacists and eugenicists has been mainstreamed by Fox News and other parts of the right-wing propaganda machine as "white genocide" and commands to "make more white babies" to offset the browning of America.

At Dame magazine, Brynn Tannehill offers a nightmarish vision of what an America ruled by the fascist dreams of Republican-fascists such as Madison Cawthorn will be:

Outgroup minorities will be targeted with even more blatant and extreme fearmongering and scapegoating by both conservative media and the GOP politicians. We can see these narratives already: Trans people are the center of the moral rot consuming the country, and a threat to women and children. Black people are intellectually inferior, violent criminals, and welfare queens who deserve nothing from the body politic other than a prison cell and crumbling schools. Immigrants are drug mules, destroying Western culture, replacing white people, and spreading disease. All of this will get turned up to 11, and the GOP-led government will act on it….

Like the slowly boiled frog, for most people in a post-democracy America life will be boring and (almost) normal. For those of us who are branded the enemies of real America — trans people, trans-inclusive feminists, Black people, immigrants, and Muslims — life is going to take a very dark turn within a few years.

In too many ways to count, Cawthorn's fascist monsters are already here — and dominate much of America and the world.

Public opinion research has made clear that hostile sexism and toxic masculinity played a key role in electing Donald Trump in 2016, and continue to fuel his movement.

Extreme wealth and income inequality in the United States (and globally) is driven by a male-dominated plutocracy.

The existential threat of climate disaster is a criminal act planned and executed by an overwhelmingly male corporate elite.

Men are largely responsible for war.

Men commit innumerable acts of violence, both on the interpersonal and societal level, against women and girls. Said violence is in no way equivalent or reciprocal by women against men either in scale or scope.

Ultimately and contrary to Madison Cawthorn's wish and command, America and the world already have too many boys who are raised to become monsters — or who somewhere along the way were seduced into such pathological behavior.

The battle against American fascism and the larger global right is not just some abstract conflict over "democratic institutions" and "illiberalism" but also a day-to-day struggle against right-wing authoritarian masculinities and the harm such identities have done (and are doing) to social democracy and a humane and free society.

More of Salon's coverage on the ideology of contemporary fascism: