What's destroying democracy around the world? At least in part, misogyny and sexism 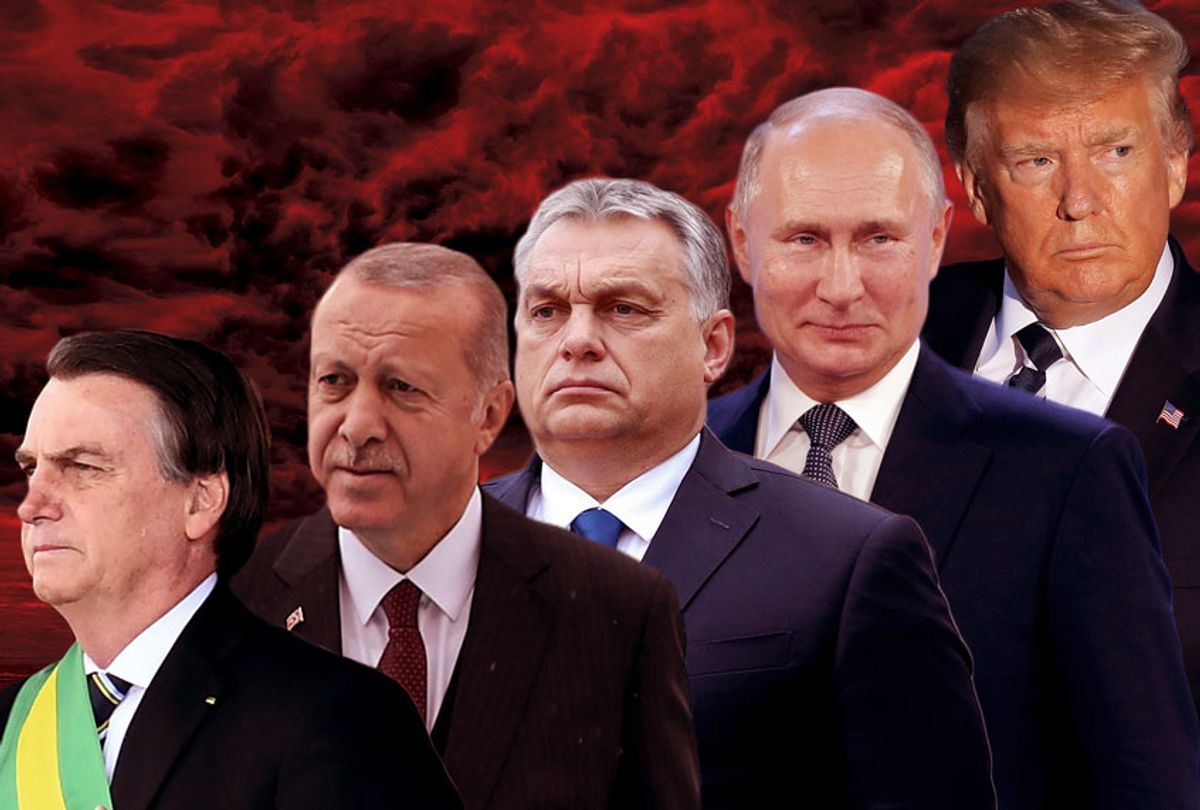 What if the reason democracy is collapsing around the world is because men really don't want to do the dishes?

That might sound a bit silly, but it was a thought that kept creeping up on me while reading this excellent and thoughtful examination of the rise of anti-liberalism around the globe by Zack Beauchamp at Vox. By "anti-liberalism," Beauchamp doesn't mean a rejection of the narrowly defined liberalism of the Democratic Party, but the "school of thought that takes freedom, consent, and autonomy as foundational moral values" that is traditionally understood to have been defined by Enlightenment philosophers, particularly John Locke, and underpins the institution of democracy itself.

As Beauchamp explains, the political compromises necessitated by liberal democracies frustrate radicals on both the left and the right, but especially the right, and so there's increasing talk — again, mostly on the right — of abandoning liberal democracy and turning to authoritarian governments that will foist radical ideologies on the public, whether they like it or not.  Politicians like Jair Bolsonaro of Brazil, Vladimir Putin of Russia, Viktor Orbán of Hungary, Recep Tayyip Erdoğan of Turkey and, yes, Donald Trump of the United States are all hostile to the core values of liberal democracy, Beauchamp argues, which include "democracy, the rule of law, individual rights, and equality."

Beauchamp outlines a number of largely convincing reasons why increasing numbers of people are embracing illiberalism: Economic losses, global violence, cultural changes, decaying institutions such as the church or the nuclear family. But, even though Beauchamp recommends reading outside the dead white male canon to understand liberalism, he underplays what I believe is a major, if not the major, objection that  conservative thinkers have to liberal democracy: They hate the liberation of women.

And they really do not want to the dishes.

As Beauchamp notes, the baseline concept of liberalism is that "people should be free to choose their paths in life," whereas conservative critics say that people should be "embedded inside social relations and identities" to give their lives meaning.

He quotes Sen. Josh Hawley, R-Mo., who objects to the concept of freedom, because it is "a philosophy of liberation from family and tradition, of escape from God and community, a philosophy of self-creation and unrestricted, unfettered free choice."

This is treated as a gender-neutral statement by both Hawley and Beauchamp (who disagrees with Hawley, to be clear), but any feminist who has been dealing with the religious right knows full well that it is not. Hawley and his ilk do not, in fact, object to men having the freedom of choice or self-creation or the ability to liberate themselves from family and community. Hawley, after all, is a rabid fan of Trump and Donald Trump Jr., both men who felt free to choose adultery and who liberated themselves from their wives for sexy new mistresses. No, when conservatives talk about "people" having too much freedom, what they largely mean is women having too much freedom.

The entire system of communities, churches and especially families of yore, for which conservatives feel so much nostalgia, is at heart patriarchal. It's a system that depends on putting women under the direct control of men — first fathers, then husbands — and extracting unpaid labor from them to keep the system running. It's a system where men's freedom is predicated on women's entrapment, where men can run the world, secure in the knowledge that someone is at home making sure the dishes get done.

This is why, despite all the high-minded conservative rhetoric about "the unchosen duties that are entailed in being a member of a community and nation," they never seem interested in passing laws imposing unwanted duties to family and community on heterosexual males. It is women who are told they have a duty to reproduce, and who are subjected to laws meant to ensure they cannot escape that duty through birth control or abortion. It is LGBT people who are told they have a duty to hide their sexuality, and conservatives have attempted to ban same-sex marriage in order to punish those who don't.

Conservatives turn a blind eye towards sexual abuse and sexual harassment, repeatedly rewarding men by giving more power to those who have been credibly accused or who have outright confessed to sexual abuse. Women who speak out against rape or harassment are routinely demonized by the right. The implication is clear: Men should be free to sexually exploit women, and women have a duty to protect men's right to abuse by staying silent.

It's not really that conservative critics of liberal democracy prefer a system that focuses on duty and community over individual rights. On the contrary, one of their main objections to feminism is that freeing women increases men's duties, including the duty to treat women with respect and the duty to share responsibility for the unpaid and often tedious labor needed so that families, churches and other social institutions run smoothly. Conservatives prefer a system where men's freedom is contingent on women's servitude.

Conservative men, in other words, really don't want to do the dishes.

Feminism may seem like a relatively new phenomenon, but even in the heyday of the Enlightenment, it was clear that the emerging concepts of liberalism — freedom, autonomy, equality — were in direct conflict with the traditions of patriarchy. John Locke, the 17th-century philosopher who is the primary author of the liberal ideas that led to the American concept of "life, liberty and the pursuit of happiness," was certainly no feminist, but he also bent toward the logic that human rights should apply to women as well as men. Around the time of the American Revolution, philosopher and feminist pioneer Mary Wollstonecraft argued that the concepts of self-governance and reason driving the American and French revolutions carried the implication of freedom for women.

And then, of course, in 1848, a group of social reformers in Seneca Falls, New York, echoing the language of the Declaration of Independence, declared that "all men and women are created equal" and that women deserve "all the rights and privileges which belong to them as citizens of these United States."

It took a long time, but the demands made at Seneca Falls — including equal pay and equal education — are finally starting to be treated seriously, not just in the U.S., but around the world. It's probably not a coincidence that just as women are getting closer to fair treatment in liberal democracies, conservatives are deciding that liberal democracy has got to go.

So much of the dissatisfaction driving conservative anger towards democracy these days goes right back to men's rage at women for demanding respect and equality. Donald Trump was elected in no small part because so many men simply would not accept electing the first female president. (Fifty-two percent of men voted for Trump, and 54% of women voted for Hillary Clinton.) The rise of the alt-right is largely the result of young men who are bitter and lonely, because they can't find romantic partners who will accept a subservient role. Rather than encourage those young men to change their expectations, conservative "intellectuals" floated the idea that women's right to freely choose their own romantic partners should be curtailed.

And the far-right, authoritarian leaders Beauchamp writes about have put a priority on taking away women's equality and LGBT rights. As he notes, Prime Minister Viktor Orbán of Hungary "has banned the teaching of 'gender ideology' in universities" and tried to bribe Hungarian women into having more children.  Putin used International Women's Day to suggest that a woman's role is decorative and servile, and certainly not equal. He's also passed laws meant to terrorize LGBT people. Erdoğan has flat-out denied that women are equal and claims their primary duty is to the home. Bolsonaro, like his friend in Washington, has a long history of misogynist remarks.

And, of course, there's Trump: An accused rapist who bragged about sexually assaulting women and who, since becoming president, has done everything possible to restrict abortion rights and birth control access, while also making it harder for rape victims to get justice.

To be clear, Beauchamp sees anti-feminism as an important aspect of the far-right's rejection of liberal democracy. But I'd argue it goes further than that, and that the beating heart of authoritarianism is misogyny. All this right-wing chatter about duty and community and family is coded language about a return to patriarchal systems. And the high-minded rhetoric about putting duty ahead of freedom is aimed squarely at women. In this old-school worldview, straight men cannot be asked to curtail their sexual freedoms or career ambitions for the common good. If anything, women's rights are viewed as an impediment to male freedom.

That's why the Women's March was so powerful and why the message of that day shouldn't be forgotten: Feminism is and must continue to be the central organizing force of the fight to preserve liberal democracy. Defeating authoritarianism means defeating the sexism that fuels it. And yes, that means guys are going to have to  suck it up and learn to do the dishes.