Trumpism goes full Orwell: "Democracy" is when Republicans win, and reality is replaced by fascist fantasy 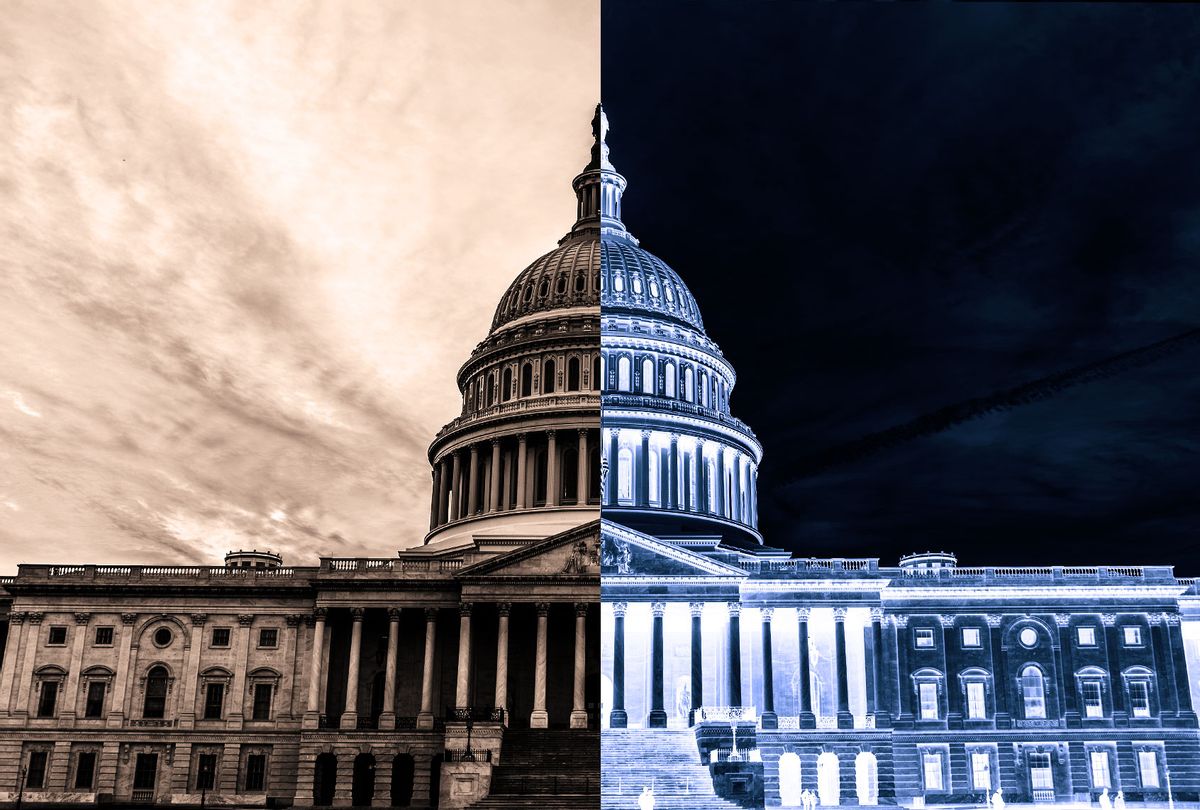 US Capitol Building, half inverted (Photo illustration by Salon/Getty Images/mbell)
--

Years ago in a high school anatomy class, I saw film footage of a man — perhaps a prison inmate or a patient at a mental hospital — who "volunteered" for a heinous medical experiment. His brain was bisected, meaning the left and right spheres were surgically split from one another. He survived the procedure, but his left and right hands now behaved as if they belonged to two different people. The man was told to use his right hand, the one over which he still had conscious control, to seize control of the left hand. The left hand continually escaped, and the two hands essentially began fighting with each other. He begged the doctors for help, but they were too busy obsessively noting every detail of the "subject's" behavior. Our teacher told us the film came from her "private collection."

That has stuck with me ever since, and it now seems a perfect metaphor for America in the Age of Trump, plagued by a fascist movement and so many other pathologies and signs of moral and political rot. We are like that unfortunate man, a psychically split nation whose hands are fighting with one another.

A new CNN public opinion poll reports that most Americans "feel democracy is under attack in this country," with 51% of respondents saying "it is likely that elected officials in the U.S. will successfully overturn the results of a future election because their party did not win." Nearly all those surveyed said that democracy in America was either "under attack" (56%) or "being tested" (37%), with only 6%, barely over one person in 20, saying that "American democracy is in no danger."

But there are important differences:

Among Republicans, 78% say that Biden did not win and 54% believe there is solid evidence of that, despite the fact that no such evidence exists. That view is also deeply connected to support for Trump. Among Republicans who say Trump should be the leader of the party, 88% believe Biden lost — including 64% who say there is solid evidence that he did not win — while among those Republicans who do not want Trump to lead the Party, 57% say Biden won legitimately.

Furthermore, Democrats and Republicans polled hold very different views on whether voting rules "make it too hard to vote" or "aren't strict enough to prevent illegal votes." Among Republicans, 83% take the latter position, while 66% of Democrats believe voting rules are overly restrictive.

Agreement on basic facts and a shared reality itself are necessary for a functioning, healthy society. These shared beliefs are especially critical in a democracy because of the role citizens play in collective decision-making. To that end, attacking truth and reality is one of the primary weapons used by fascist leaders and movements.

Democracy can eventually be exhausted by these attacks before succumbing to disorientation and confusion where fascism is normalized as a type of "solution" — a way to restore order and address the very social and political problems it has both created and made worse.

This week, during an interview on the podcast SmartLess, documentary filmmaker Ken Burns described America in this moment of extreme crisis, saying, "It's really serious. There are three great crises before this: the Civil War, the Depression, and World War II. This is equal to it."

In a new essay, legendary CBS News anchor Dan Rather sounds a similar note of alarm and concern: and alarm about America's democracy crisis.

What is happening now in our nation's capital, and radiating throughout the country, is enough to put even the most cynical of politicians of past eras to shame.

I fear that we don't have an adequate framework to make complete sense of the depravity and disingenuousness of what is taking place. Basically, we have one political party at the national level, the Republicans, who have long since ceded any pretense of actually doing the work of government, namely making policies to solve problems. Instead, it is raw power for power's sake, and that has turned Congress into what is in essence largely a troll farm on their side of the aisle.

CNN's new findings offer further proof of the Orwellian power that the Republican Party and fascist movement have over their followers. In practice this power involves creating an alternate reality through the manipulation of language and the use of disinformation, outright lies, moral inversion and other tactics.

In the Republican alternate reality, democracy itself has been redefined to mean a condition under which Republicans and Trumpists win every election. If they somehow lose, then by definition the result was not "democratic" and is therefore deemed illegitimate. Such elections must be overturned or reworked or reverse-engineered until the "correct" result is achieved.

Free and fair elections where the public will is respected, minority rights are guaranteed and leaders are held accountable to the voters and the rule of law — although inevitably imperfect — are the most basic criteria for a democracy.

The Republican Party and its nearly coterminous neofascist movement has mutated those norms as part of a plan to create a form of "managed democracy" or "competitive authoritarianism," under which chosen candidates are guaranteed to win but the superficial norms of democracy are observed and opposition is tolerated (up to a point).

Today's Trump-controlled Republican Party and the larger white right have become obsessed with "election fraud" and "securing" the votes. In their version of Orwell's Newspeak, "fraud" refers to the alarming possibility that votes cast by Black and brown people might be counted on an equal basis with those of white Republicans in affluent exurbs and "red states."

Through that same logic, "securing" the vote ultimately means that nonwhite people and other core Democratic constituencies should have their voting rights severely restricted. Voting is to be understood as a privilege granted to the "right kinds of people."

Projection is also a powerful weapon in the neofascist assault on American democracy and society, which often employs Nazi Propaganda Minister Joseph Goebbels' famous dictum: "Accuse the other side of that which you are guilty."

Perhaps most troubling, Trump and his neofascist movement's "Big Lie" strategy about the 2020 election is gaining momentum: Now more than three-quarters of Republican voters (and increase since the events of Jan. 6) endorse it. The Big Lie is now a proxy for supporting Donald Trump, a signal that you are a loyal member of his personality cult.

In the bestselling book "The Dangerous Case of Donald Trump," therapist Elizabeth Mika warns of fascism's alluring and seductive power:

Tyranny feeds on the irrationality of narcissistic myths and magical thinking, even though its ideology may be disguised as hyper-rationalism, as it was the case with Communism. In this, it very much resembles the narcissistically psychopathic character of the tyrant himself: solipsistic, withdrawn from reality, full of grandiose and paranoid beliefs impervious to the corrective influences of objective facts.

In his essay "The Politics of Disimagination and the Pathologies of Power," philosopher and education professor Henry Giroux argues that American society is experiencing such extreme and rapid decline that engaged and responsible citizenship — which offers robust protection against the allure of fascism and other anti-human movements and beliefs — has become increasingly uncommon:

Civic illiteracy is the modus operandi for creating depoliticized subjects who believe that consumerism is the only obligation of citizenship, who privilege opinions over reasoned arguments, and who are led to believe that ignorance is a virtue rather than a political and civic liability….

The politics and machinery of disimagination and its production of ever-deepening ignorance dominates American society because it produces, to a large degree, uninformed customers, hapless clients, depoliticized subjects and illiterate citizens incapable of holding corporate and political power accountable. At stake here is more than the dangerous concentration of economic, political and cultural power in the hands of the ultrarich, megacorporations and elite financial services industries. Also at issue is the widespread perversion of the social, critical education, the public good, and democracy itself.

Those who choose to live inside TrumpWorld and the MAGAverse are lost souls, they are the Lost Americans.

There is little if anything that can be done to return them to normal society and empirical reality. What such people have found in those imaginary realms is too compelling, too exciting and answers too many of their needs and existential questions. The poison they have found there soothes their pain, even as it destroys them. It is foolish to hope or believe that the Trumpites and other neofascists will ever willingly abandon their safe space.

Fascism is governed by the passions, soul and spirit. It is the enemy of intellect and reason, which is why the uninitiated are so confounded by it. Fascism is the mind-killer. The alternate reality it has now created within American society is in danger of conquering and absorbing the other reality — the real one, where most of us still live.