America's neofascist death cult won't help stop the pandemic. We have to survive them, too 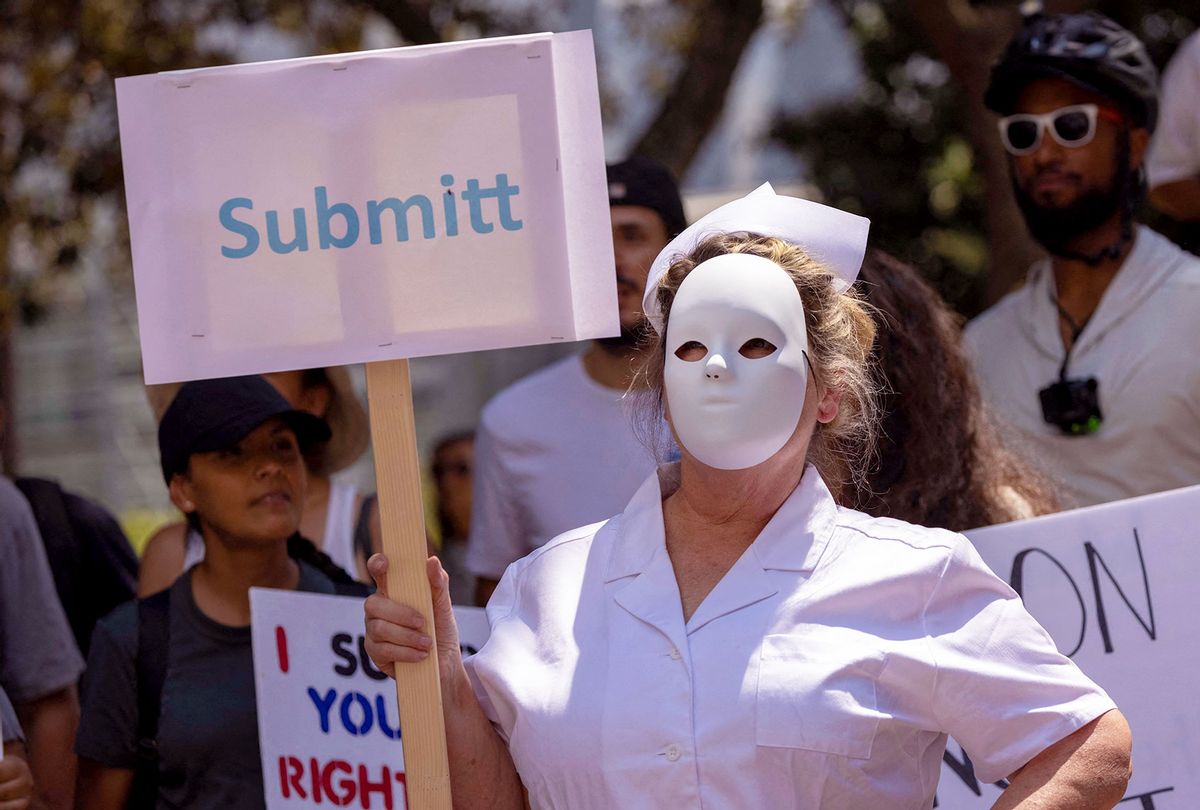 A protester dressed as a scary nurse holds a mispelled sign that reads "Submitt" at an anti-vaccination protest rally near City Hall, following the Los Angeles City Council's vote earlier this week on drafting an ordinance requiring proof of vaccination to enter many indoor public spaces in Los Angeles, on August 14, 2021. (DAVID MCNEW/AFP via Getty Images)
--

Channeling Charlton Heston in the original "Planet of the Apes" film: "It's a madhouse! A madhouse!"

America is now experiencing a second wave of the deadly coronavirus pandemic. At least 600,000 people have died from the pandemic in the United States. That number will likely surpass one million by the time it is over. The country may even be forced to endure another wave of lockdowns and forced business closures intended to slow the spread of the disease. The economic and human consequences will be dire.

The U.S. is now averaging 100,000 new COVID-19 infections a day, returning to a milestone last seen during the winter surge in another bleak reminder of how quickly the delta variant has spread through the country.

Health officials fear that cases, hospitalizations and deaths will continue to soar if more Americans don't embrace the COVID-19 vaccine. Nationwide, 50% of residents are fully vaccinated and more than 70% of adults have received at least one dose.

"The situation is particularly dire in the South," Time reports, "which has some of the lowest vaccination rates in the U.S. and has seen smaller hospitals overrun with patients."

"The health care system right now is nearly at a breaking point. … For the next three weeks or so, I see no relief on what's happening in emergency departments," Dr. David Persse, Houston's chief medical officer, told Time.

This courting of even more disaster is a choice. Vaccines are free and readily available to all who want them. In that way, the Biden administration has made remarkable progress in the fight against the coronavirus pandemic. But the Biden administration and common sense have shown themselves to be no match in a battle against the willful stupidity and evils of Trumpism and the Republican Party death cult. Trump's followers and other Republicans and so-called conservatives are willing to risk death from the pandemic as proof of loyalty to "the cause."

None of this is a surprise: Historically, the harvest of neofascism is death and destruction.

The Age of Trump is a nationwide crime scene; the Trump regime's coronavirus democide is people's exhibit number one. Donald Trump and his collaborators and allies committed these crimes before the world.

As part of their crimes against democracy, the rule of law, the Constitution, the common good and humanity, the Trump regime and its allies legitimated and circulated lethal lies and disinformation about the coronavirus pandemic.

Moreover, the Age of Trump and American neofascism amplified the worst impulses of the Republican Party and right-wing, most notably anti-intellectualism and conspiracism.

For example, a new poll from the Economist and YouGov shows that some 30 percent of Republicans actually believe that the government put microchips inside the coronavirus vaccines to presumably track and otherwise control the American people.

Biological and chemical warfare are banned by international treaties. Of course, the Trump regime and the Republican Party could not resist the temptations of such evil and reckless behavior. Writing at the Guardian, Rebecca Solnit details how:

Some of the most powerful conservatives in the United States have, since the beginning of the Covid-19 pandemic, chosen to sow disinformation along with mockery and distrust of proven methods of combating the disease, from masks to vaccines to social distancing. Their actions have afflicted the nation as a whole with more disease and death and economic crisis than good leadership aligned with science might have, and, in spite of hundreds of thousands of well-documented deaths and a new surge, they continue. Their malice has become so normal that its real nature is rarely addressed. Call it biological warfare by propaganda....

An administration more committed to saving lives than scoring points could have contained the pandemic rather than made the US the worst-hit nation in the world. Illnesses and casualties could have been far lower, and we could have been better protected against the Delta variant.

Solnit concludes, "Covid-19 is far from the first time people have decided to profit from promoting the death of others: the fossil fuel industry plunging ahead while fully aware that climate catastrophe was the consequence of its product is the most extreme example. Manufacturers of guns and prescription opiates have done so as well. But it might be the first time that a new threat has been so dramatically increased not by direct profiteers but by those selling ideology and sowing division."

Neofascism's toxic power is also shown through how domestic terrorism and other political violence are defining features of the Age of Trump and beyond.

Refusing to be vaccinated against the coronavirus pandemic is another way for such violent fantasies and behavior to assert themselves.

For example, Marjorie Taylor Greene, a noted conspiracy theorist who has shown herself to be a neofascist and white supremacist and professional ignoramus and loud public menace, is now encouraging "Southerners" to take up arms against public health outreach workers who are trying to stop the spread of the coronavirus pandemic and its highly infectious Delta variant.

"[President] Joe Biden wants to come talk to you guys," she said at the Alabama Federation of Republican Women on Tuesday. "He's going to be sending one of his police state friends to your front door to knock on the door, take down your name, your address, your family members' names, your phone numbers, your cellphone numbers, probably ask for your Social Security number and whether you've taken the vaccine or not."

She continued: "What they don't know is in the South, we all love our Second Amendment rights, and we're not real big on strangers showing up on our front door, are we? They might not like the welcome they get."

America has been amusing itself to death for a very long time. The coronavirus has not forced a new maturity and responsible behavior on to the American people as a whole. There are still too many Americans who embrace infantile and other irresponsible behavior as something to be idolized and not shunned and shamed.

Ultimately, what should responsible, reasonable, intelligent people who believe in the common good and basic principles of society do in a country where at least 30 percent of Republicans (which translates into millions of people) have surrendered to a type of derangement where such obligations to other human beings no longer apply?

Self-preservation should be the first priority. If one's neighbors are not willing to do the responsible thing by being vaccinated against COVID-19 then we must look out for ourselves. In the face of a highly communicable disease such a decision may only offer temporary (if not wholly) illusory safety.

What of communicative democracy and finding common ground with those people who have embraced anti-social behavior by refusing to be vaccinated and rejecting other commonsense public health responses to a pandemic? There is nothing to discuss. Responsible citizens would be wise to spend their energy on other matters.

Government exists to resolve problems that are too large for any one person or group to confront and resolve on their own. By definition, a deadly pandemic is one such problem. But such an outcome requires some basic level of cooperation by the governed. If such cooperation is not forthcoming, then government coercion may be necessary. This coercion may also require the help of the private sector through vaccine passports and similar requirements to participate fully in society. Unfortunately, coercion can be a threat to government legitimacy. In a democracy, such a downward spiral is to be avoided whenever possible.

There is nothing to be discussed with them. The premise of their claims are fantasies of White freedom, where skin color and other privileges of gender and money function as protections from reality — until reality asserts itself in ways that care not for the indulgences and assumptions of right-wing libertarianism. I have little doubt that many of the COVID deniers who are now making deathbed confessions and apologizing for not getting vaccinated likely identity as right-wing anti-government libertarians.

Abstract principles often melt under the fear of existential trials and judgement.

America's coronavirus fascism madhouse is not something to be lived through but rather survived. If the Trump-Republicans continue to have their way with the coronavirus plague, this will be how the rest of us tell the tale of the Age of Trump and all the horribleness that it continues to reap even after its leader was expelled from the White House.

The first sentences of the tale chronicling an America possessed by the dream-nightmare of TrumpWorld and the MAGAverse have already been written. What will the next sentences be? And who is writing the story?