Meadows was allegedly in contact with one of the organizers of the Jan. 6 "Stop the Steal" rally 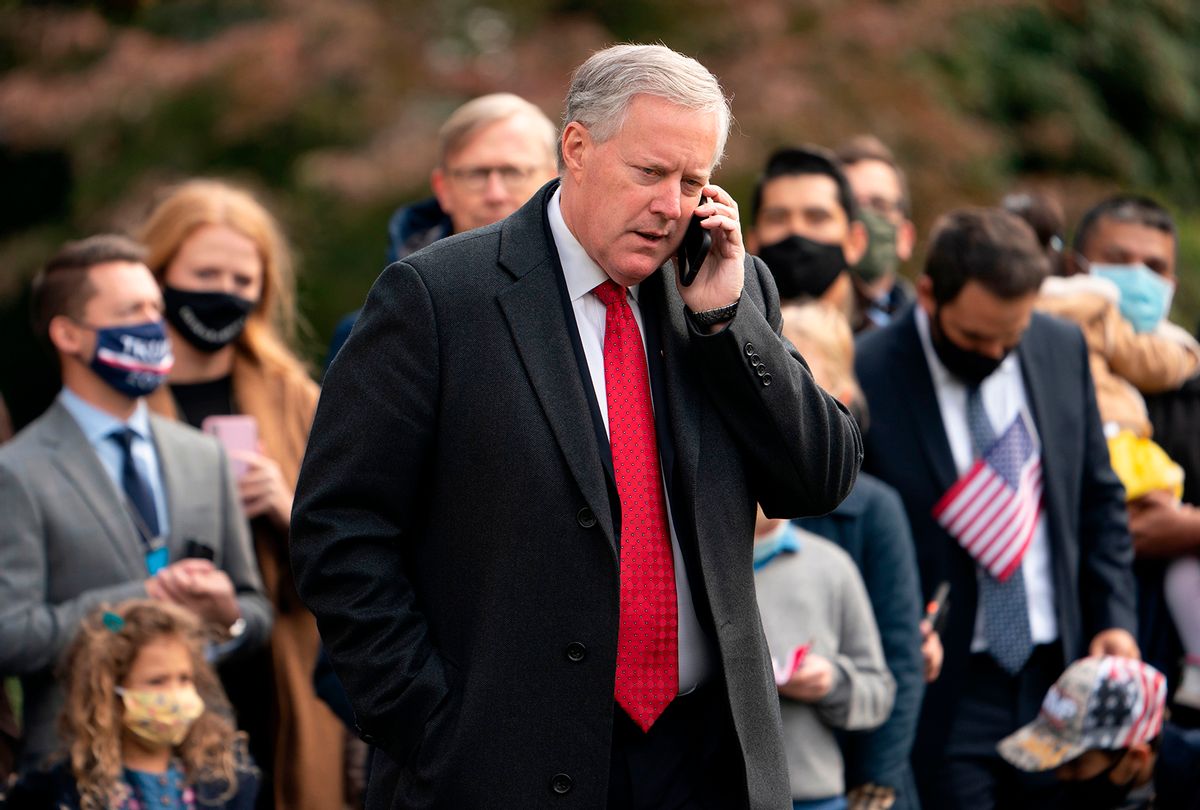 Former White House Chief of Staff Mark Meadows speaks on his phone as he waits for then-President Donald Trump to depart the White House on October 30, 2020 in Washington, DC. (ANDREW CABALLERO-REYNOLDS/AFP via Getty Images)
--

The House select committee investigating the Jan. 6 Capitol riot is moving forward with contempt charges against former White House Chief of Staff Mark Meadows, saying in a letter that it has "no choice" after he decided to stop cooperating with the Democratic-led probe.

According to the letter, which contains a number of new details about Meadows' previous cooperation with the committee, the Trump Administration official has already turned over thousands of documents, including numerous emails and text messages. But he's also withheld thousands more — and refused to sit for a deposition scheduled for Wednesday — using claims of executive privilege that the committee says are spurious at best.

"The Select Committee is left with no choice but to advance contempt proceedings and recommend that the body in which Mr. Meadows once served refer him for criminal prosecution," committee Chair Rep. Bennie Thompson, D-Miss., wrote in the letter Tuesday. "There is no legitimate legal basis for Mr. Meadows to refuse to participate in a deposition."

Included in the documents Meadows handed over to the select committee is a powerpoint titled "Election Fraud, Foreign Interference & Options for 6 JAN" that was intended for distribution "on the hill," according to the letter. Thompson also revealed the contents of a Nov. 6, 2020 email to an unnamed Congressperson in which Meadows replies "I love it" in response to a "highly controversial" plan that would have appointed alternative electors in several states that Trump had lost.

Meadows was also allegedly in contact with one of the organizers of the Jan. 6 "Stop the Steal" rally which preceded the riot.

These were among the more than 6,000 files Meadows gave the committee, though he also included a log of more than 1,000 text messages and hundreds of emails that were withheld "based on claims of executive, attorney-client, or other privilege."

Thompson's letter also raised another point about Meadows' data collection — since so many of the documents were from personal accounts, Thompson questioned whether Meadows had transferred the proper documents to the National Archives "in compliance with the Presidential Records Act."

For his part, Meadows looks ready to fight the contempt charges in court.

"We now have every indication from the information supplied to us last Friday -- upon which Mr. Meadows could expect to be questioned -- that the Select Committee has no intention of respecting boundaries concerning Executive Privilege," Meadows' attorney George J. Terwilliger III said in a letter to the committee last week.

Thompson's letter was in part a response to these assertions, and in particular addressed previous comments by Terwilliger in which he accused Thompson of believing "that a witness's assertion of 5th Amendment rights is 'tantamount to an admission of guilt.'"

"That is not an accurate characterization of my position on the 5th Amendment, nor is that interpretation of my comments consistent with our discussions about the purpose of tomorrow's deposition -- i.e., a proceeding in which your client can assert privilege claims with sufficient particularity for further consideration," Thompson wrote.

It's unclear whether Meadows will seek to use his 5th Amendment rights — though at least two other witnesses under scrutiny from the committee have said they will: longtime GOP operative Roger Stone and ed-DOJ official Jeffrey Clark.