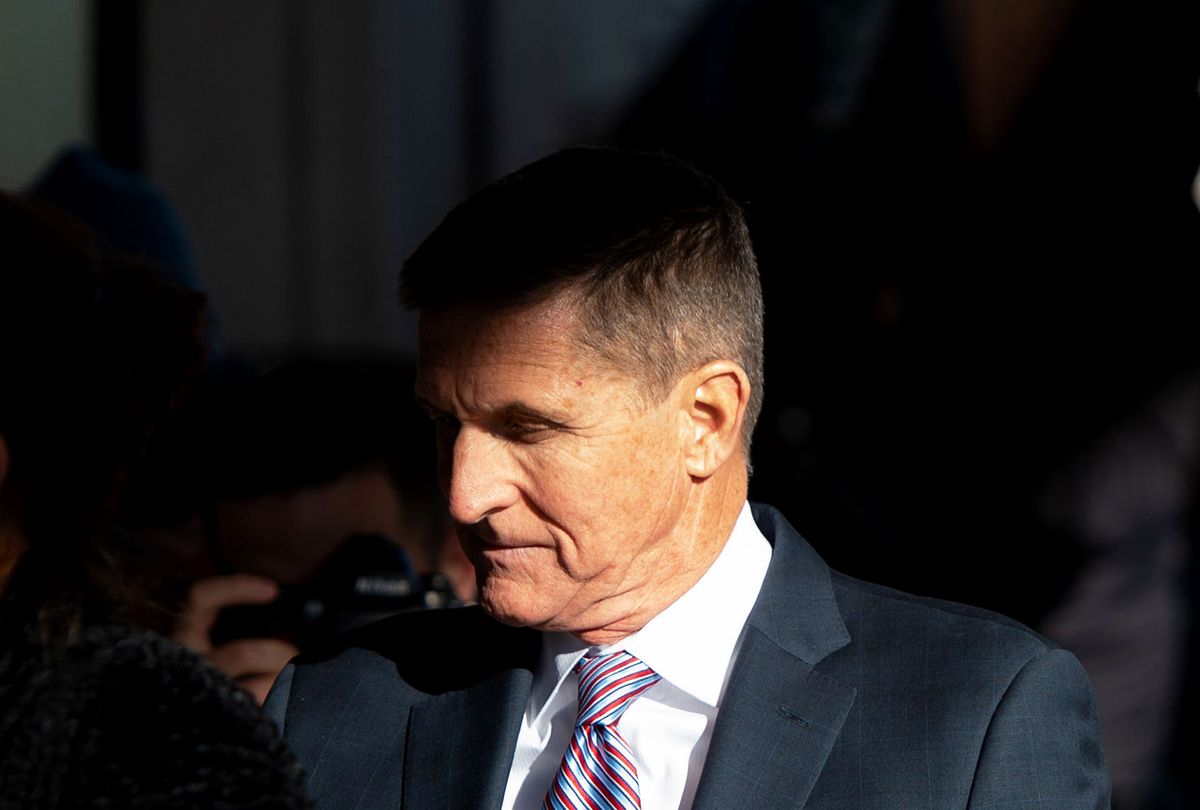 A former D.C. National Guard official accused two top Army officials, including Gen. Charles Flynn, the brother of former Trump national security adviser Michael Flynn, of lying to Congress about the military response to the Jan. 6 riot, according to a leaked memo obtained by Politico.

Col. Earl Matthews, who served in various high-level National Security Council and Pentagon positions in the Trump era, sent a 36-page memo to the House select committee investigating the Jan. 6 insurrection calling Gen. Charles Flynn, who was deputy chief of staff for operations at the time, and Lt. Gen Walter Piatt, the director of Army staff, "absolute and unmitigated liars" over their accounts of the day to Congress. The Army previously falsely denied that Charles Flynn, whose brother has spent months pushing election and QAnon conspiracy theories, was involved in the response before admitting that he was present during a "tense" phone call on which Capitol Police and D.C. officials pleaded with the Pentagon to send the National Guard to the Capitol.

The memo also criticizes the Pentagon's inspector general for issuing a report with "myriad inaccuracies, false or misleading statements, or examples of faulty analysis" in the office's investigation of the military response.

RELATED: Why did Army repeatedly deny that Michael Flynn's brother was involved in Capitol riot response?

Matthews on Jan. 6 served as top attorney to then-D.C. National Guard chief Maj. Gen. William Walker, who has since been appointed the House sergeant at arms. The memo backs up Walker's testimony to Congress about an hours-long delay in the Army's call to deploy the D.C. National Guard to the Capitol.

"Every leader in the D.C. Guard wanted to respond and knew they could respond to the riot at the seat of government" before the order was finally given, Matthews wrote. But D.C. guardsmen instead sat "stunned watching in the Armory" as the Capitol came under siege.

Matthews participated in a 2:30 p.m. call on Jan. 6 during which then-Capitol Police Chief Steven Sund "pleaded" for the National Guard to immediately be deployed to the Capitol. Flynn and Piatt opposed the move, Matthews wrote.

"LTGs Piatt and Flynn stated that the optics of having uniformed military personnel deployed to the U.S. Capitol would not be good," the memo says.

Piatt and Flynn instead pushed to have Guardsmen take over normal police duties so D.C. officers could be deployed to the Capitol, according to the memo and another document produced by a D.C. Guard official on Jan. 7. Four minutes later, Flynn again "advised the D.C. National Guard to standby" while the request was sent to higher-ups. Everyone on the call was "astounded," Matthews wrote.

Both Flynn and Piatt later denied that they resisted sending the D.C. Guard to the Capitol.

"At no point on January 6 did I tell anyone that the D.C. National Guard should not deploy directly to the Capitol," Piatt wrote in a response to questions from House Oversight Committee Chairwoman Carolyn Maloney, D-N.Y., in June.

Flynn said he "never expressed a concern about the visuals, image, or public perception" of sending the Guard to the Capitol.

Walker also testified to Congress in March that both Army officials expressed concerns about "optics."

Matthews wrote that he and Walker "heard Flynn identify himself and unmistakably heard him say that optics of a National Guard presence on Capitol Hill was an issue for him. That it would not look good. Either Piatt or Flynn mentioned 'peaceful protestors.'"

The memo does not suggest that Flynn's response was related to the views spread by his brother and does not mention Michael Flynn at all. Charles Flynn testified to Congress in June that the Guard was not initially prepared to respond to the riot but a "team of over 40 officers and non-commissioned officers immediately worked to recall the 154 D.C. National Guard personnel from their current missions, reorganize them, re-equip them, and begin to redeploy them to the Capitol."

"If it does not constitute the willful and deliberate misleading of Congress, then nothing does," the memo says. "Flynn was referring to 154 D.C. Guardsmen who were already on duty, were trained in civil disturbance response, already had area familiarization with Washington, DC, were properly kitted and were delayed only because of inaction and inertia at the Pentagon."

Army spokesman Mike Brady told Politico that the Army's "actions on January 6th have been well-documented and reported on, and Gen. Flynn and Lt. Gen. Piatt have been open, honest and thorough in their sworn testimony with Congress and DOD investigators."

"As the Inspector General concluded, actions taken 'were appropriate, supported by requirements, consistent with the DOD's roles and responsibilities for DSCA, and compliant with laws, regulations, and other applicable guidance," Brady said. "We stand by all testimony and facts provided to date, and vigorously reject any allegations to the contrary. However, with the January 6th Commission's investigation still ongoing, it would be inappropriate to comment further."

Matthews also disputed parts of the Pentagon inspector general's report about the response. The report says that then-Army Secretary Ryan McCarthy had to call Walker twice on Jan. 6 to get him to deploy his forces, which Matthews called  "an outrageous assertion … as insulting as it is false," adding that McCarthy himself was "incommunicado or unreachable for most of the afternoon."

Megan Reed, a spokesperson for the Pentagon inspector general, told Politico that the office stands by the report.

The memo also cites a nonpublic document titled "Report of the Army's Operations on January 6 2021," which Matthews said Piatt helped produce after a number of combative congressional hearings. Lawmakers have not seen the document but Piatt cited it during a June hearing to support his account.

"In March 2021, MG Walker was told by a friend that LTG Piatt was so upset with MG Walker that he directed the development of an Army 'White Paper' to retell events of 6 January in a light more favorable to LTGs Flynn, Piatt, Secretary McCarthy and the Army Staff," Matthews wrote. He alleged that the Army sought "to create an alternate history which would be the Army's official recollection of events."

The report, he wrote, is a "revisionist tract worthy of the best Stalinist or North Korea propagandist."

Matthews appears to have submitted the memo to back up Walker, his former boss, after other officials sought to blame Walker in their accounts of what went wrong that day.

"Our Army has never failed us and did not do so on January 6, 2021," Matthews told Politico. "However, occasionally some of our Army leaders have failed us and they did so on January 6th. Then they lied about it and tried to cover it up. They tried to smear a good man and to erase history."

Read more on the various investigations into the Jan. 6 uprising: