Lindsey Graham rebukes McConnell's leadership: Senate Republicans are "getting shot in the back" 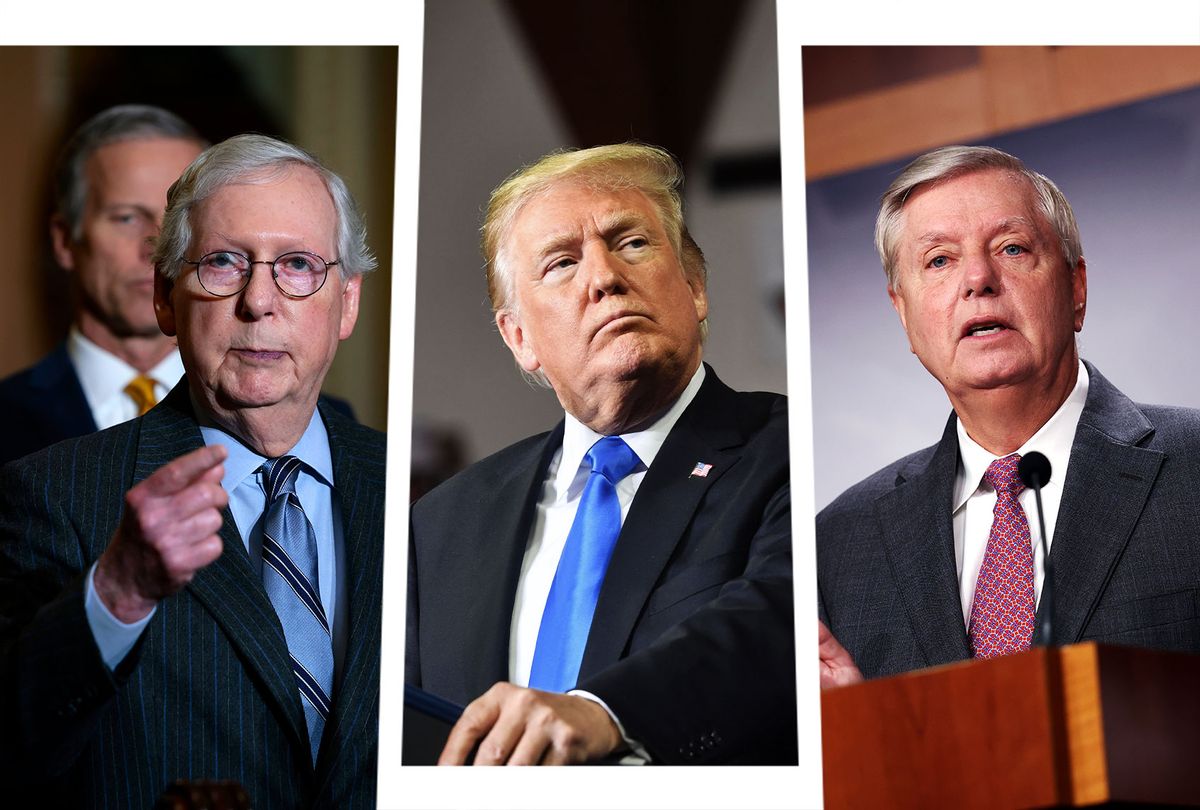 There is growing a rift in the Republican Party over how to address the nation's growing debt – with Linsday Graham, representing Donald Trump's interests in the Senate, battling GOP Leader Mitch McConnell.

Graham, a Republican from South Carolina who ran against Trump in the 2016 GOP primary, warned his party colleagues on Wednesday that they would endure Trump's wrath if they went along with the Senate Minority Leader's plan to assist the Democrats in creating a special pathway for increasing the nation's debt limit.

"I think this is a mistake," Graham said of McConnell's proposal at a closed door GOP caucus meeting on Wednesday. Several senators told The Hill that Graham privately warned them that "the president is going to be engaged on this issue."

"We've been telling our Republican base for four months, '[Democrats] are spending money by themselves, they should raise the debt ceiling by themselves through reconciliation.'" Graham blamed McConnell for putting their party in a double bind, saying that the Kentucky senator "led them on a charge up a hill and they were getting shot in the back."

"It's pretty obvious to me that this will not be received well by the Republican faithful, including Donald Trump," Graham added.

McConnell struck a bipartisan agreement with Senate Majority Leader Chuck Schumer, D-N.Y., this week to resolve the debt ceiling standoff. According to The Washington Post, the deal would create a legislative mechanism for Democrats to raise the ceiling with a debate-ending simple majority vote. Thus far, Democratic efforts to lift the ceiling have been thwarted by a Republican filibuster, whose cloture requires 60 votes – a majority that Democrats have repeatedly failed to procure.

Previously, Republicans have insisted that Democrats raise the debt ceiling themselves through budget reconciliation, another maneuver that circumvents the filibuster. But Democrats have countered that the vote should be bipartisan since both parties are responsible for the nation's debt.

This week, Punchbowl News reported that McConnell might have whipped up the ten Republicans votes to hold a cloture vote, which would let Democrats proceed with their special pathway. Among those in apparent support of McConnell's plan are Sens. John Thune of South Dakota, Roger Wicker of Mississippi, John Cornyn of Texas, Rob Portman of Ohio, Shelley Moore Capito of West Virginia, Roy Blunt of Missouri, Susan Collins of Maine, and Thom Tillis and Richard Burr of North Carolina.

But with Graham's objections, it remains unclear whether McConnell's caucus will be able to steel themselves against the threat of Trump's wrath.

"Mitch McConnell just folded on the Debt Ceiling, a total victory for the Democrats — didn't use it to kill the $5 Trillion Dollar (real number!) Build Back Worse Bill that will essentially change the fabric of our Country forever," the former president added.

McConnell has rebutted that he would only partially be letting Democrats off the hook by only allowing them to pursue a special pathway because Democrats would ultimately have to choose to use it.

RELATED: Why Donald Trump continues to be a major thorn in Mitch McConnell's side

Still, the mere proposal has sparked ire amongst House Republicans, according to POLITICO, who feel that it's the Senate GOP's latest series of undue concessions.

"We're strongly against this process where they can just pass a bill with a majority vote in the Senate based on a rule change in the House. That's even more concerning," Minority Whip Steve Scalise, R-La., told POLITICO. "It would be a new precedent to say in a rule in legislation in the House you can set up a 50-vote bill in the Senate. That's never been done before. It's dangerous."

If a compromise isn't reached to raise the debt ceiling, it could spell disaster for Medicare, Medicaid, and Social Security. According to an estimate by the Bipartisan Policy Center, if an agreement is not reached, the federal government could run out of enough cash to fulfill 35% of its payments.