Democracy is under threat around the world. But given the dire situation of the U.S., was this really a good idea? 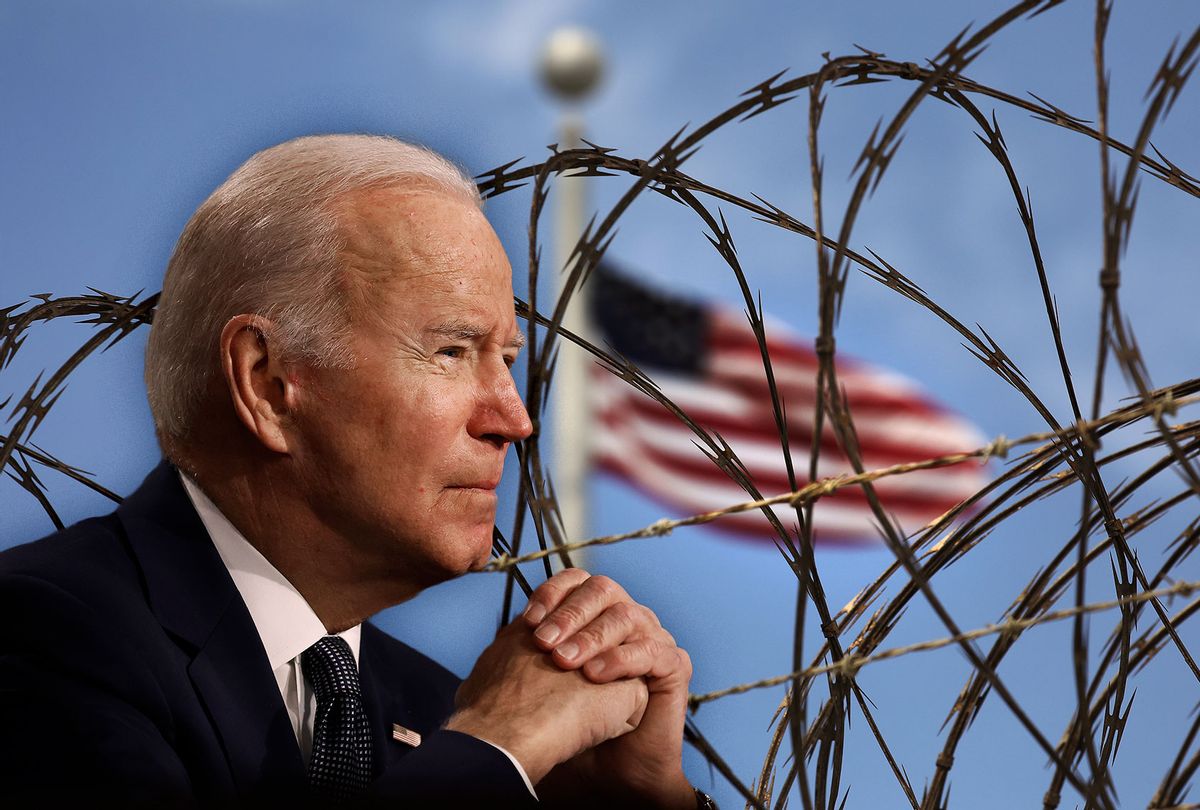 President Biden's virtual Summit for Democracy on Dec. 9 and 10 is part of a campaign to restore the United States' standing in the world, which took such a beating under Donald Trump's erratic foreign policies. Biden hopes to secure his place at the head of the "free world" table by coming out as a champion for human rights and democratic practices worldwide.

The greater possible value of this gathering of 111 countries is that it could instead serve as an "intervention," or an opportunity for people and governments around the world to express their concerns about the flaws in U.S. democracy and the undemocratic way the United States deals with the rest of the world. Here are just a few issues that should be considered:

1. The U.S. claims to be a leader in global democracy at a time when its own already deeply flawed democracy is crumbling, as evidenced by the shocking Jan. 6 assault on the U.S. Capitol. On top of the systemic problem of a duopoly that keeps other political parties locked out and the obscene influence of money in politics, the U.S. electoral system is being further eroded by the increasing tendency to contest credible election results and widespread efforts to suppress voter participation (19 states have enacted 33 laws that make it more difficult for citizens to vote).

A broad global ranking of countries by various measures of democracy puts the U.S. at No. 33, while the U.S. government-funded Freedom House ranks the United States No. 61 in the world for political freedom and civil liberties, on a par with Mongolia, Panama and Romania.

2. The unspoken U.S. agenda at this "summit" is to demonize and isolate China and Russia. But if we agree that democracies should be judged by how they treat their people, then why is Congress failing to pass a bill to provide basic services like health care, child care, housing and education, which are guaranteed to most Chinese citizens for free or at minimal cost?

And consider China's extraordinary success in relieving poverty. As UN Secretary General António Guterres has said, "Every time I visit China, I am stunned by the speed of change and progress. You have created one of the most dynamic economies in the world, while helping more than 800 million people to lift themselves out of poverty — the greatest anti-poverty achievement in history."

China has also far surpassed the U.S. in dealing with the pandemic. Little wonder a Harvard University report found that more than 90% of the Chinese people like their government. One would think that China's extraordinary domestic achievements would make the Biden administration a bit more humble about its "one-size-fits-all" concept of democracy.

3. The climate crisis and the pandemic are a wake-up call for global cooperation, but this summit is transparently designed to exacerbate divisions. The Chinese and Russian ambassadors to Washington have publicly accused the U.S. of staging the summit to stoke ideological confrontation and divide the world into hostile camps, while China held a competing International Democracy Forum with 120 countries the weekend before the U.S. summit.

Inviting the government of Taiwan to the U.S. summit further erodes the 1972 Shanghai Communiqué, in which the United States acknowledged the "One China" policy and agreed to cut back military installations on Taiwan.

Also invited is the corrupt anti-Russian government installed by the 2014 U.S.-backed coup in Ukraine, which reportedly has half its military forces poised to invade the self-declared People's Republics of Donetsk and Luhansk in eastern Ukraine, which declared independence in response to the 2014 coup. The U.S. and NATO have so far supported this major escalation of a civil war that already killed 14,000 people.

4. The U.S. and its Western allies — the self-anointed leaders of human rights — just happen to be the major suppliers of weapons and training to some of the world's most vicious dictators. Despite its verbal commitment to human rights, the Biden administration and Congress recently approved a $650 million weapons deal for Saudi Arabia at a time when this repressive kingdom is bombing and starving the people of Yemen.

The administration even uses U.S. tax dollars to "donate" weapons to dictators, like Gen. Sisi in Egypt, who oversees a regime with thousands of political prisoners, many of whom have been tortured. Of course, these U.S. allies were not invited to the Democracy Summit — that would be too embarrassing.

5. Perhaps someone should inform Biden that the right to survive is a basic human right. The right to food is recognized in the 1948 Universal Declaration of Human Rights as part of the right to an adequate standard of living, and is enshrined in the 1966 International Covenant on Economic, Social and Cultural Rights.

So why is the U.S. imposing brutal sanctions on countries from Venezuela to North Korea that are causing inflation, scarcity and malnutrition among children? Former UN special rapporteur Alfred de Zayas has blasted the United States for engaging in "economic warfare" and compared its illegal unilateral sanctions to medieval sieges. No country that purposely denies children the right to food and starves them to death can call itself a champion of democracy.

6. Since the U.S. was defeated by the Taliban and withdrew its occupation forces from Afghanistan, it is acting as a very sore loser and reneging on basic international and humanitarian commitments. Certainly Taliban rule in Afghanistan is a setback for human rights, especially for women, but pulling the plug on Afghanistan's economy is catastrophic for the entire nation.

The U.S. is denying the new government access to billions of dollars in Afghanistan's foreign currency reserves held in U.S. banks, causing a collapse in the banking system. Hundreds of thousands of public servants have not been paid. The UN is warning that millions of Afghans are at risk of starving to death this winter as the result of these coercive measures by the U.S. and its allies.

7. It's telling that the Biden administration had such a difficult time finding Middle Eastern countries to invite to the summit. The U.S. just spent 20 years and $8 trillion trying to impose its brand of democracy on the Middle East and Afghanistan, so you'd think it would have a few protégés to showcase.

But no. In the end, they could only agree to invite the state of Israel, an apartheid regime that enforces Jewish supremacy over all the land it occupies, legally or otherwise. Embarrassed to have no Arab states attending, the Biden administration added Iraq, whose unstable government has been racked by corruption and sectarian divisions ever since the U.S. invasion in 2003. Its brutal security forces have killed over 600 demonstrators since huge anti-government protests began in 2019.

8. What, pray tell, is democratic about the U.S. gulag at Guantánamo Bay? The U.S. government opened the Guantanamo detention center in January 2002 as a way to circumvent the rule of law as it kidnapped and jailed people without trial after the crimes of Sept. 11, 2001. Since then, 780 men have been detained there. Very few were charged with any crime or confirmed as combatants, but still they were tortured, held for years without charges and never tried.

This gross violation of human rights continues, with most of the 39 remaining detainees never even charged with a crime. Yet this country that has locked up hundreds of innocent men with no due process for up to 20 years still claims the authority to pass judgment on the legal processes of other countries, in particular on China's efforts to cope with Islamist radicalism and terrorism among its Uighur minority.

9. With the recent investigations into the March 2019 U.S. bombing in Syria that left 70 civilians dead and the drone strike that killed an Afghan family of 10 in August 2021, the truth of massive civilian casualties in U.S. drone strikes and airstrikes is gradually emerging, as well as how these war crimes have perpetuated and fueled the "war on terror," instead of winning or ending it.

If this was a real democracy summit, whistleblowers like Daniel Hale, Chelsea Manning and Julian Assange, who have risked so much to expose the reality of U.S. war crimes to the world, would be honored guests at the summit instead of political prisoners in the American gulag.

10. The U.S. picks and chooses countries as "democracies" on an entirely self-serving basis. But in the case of Venezuela, it has gone even farther and invited an imaginary U.S.-appointed "president" instead of the country's actual government.

The Trump administration anointed Juan Guaidó as "president" of Venezuela, and Biden invited him to the summit. But Guaidó is neither a president nor a democrat, having boycotted parliamentary elections in 2020 and regional elections in 2021. But Guaidó did come tops in one recent opinion poll, with the highest public disapproval rating of any opposition figure in Venezuela at 83%, and the lowest approval rating at 13%.

Guaidó named himself "interim president" (with no legal mandate) in 2019, and launched a failed coup against the elected government of Venezuela. When his U.S.-backed efforts to overthrow the government failed, Guaidó signed off on a mercenary invasion which failed even more spectacularly. The European Union no longer recognizes Guaidó's claim to the presidency, and his "interim foreign minister" recently resigned, accusing Guaidó of corruption.

When the U.S. emerged from the Second World War as the strongest economic and military power in the world, its leaders had the wisdom not to claim such a role. Instead they brought the whole world together to form the United Nations, on the principles of sovereign equality, non-interference in each other's internal affairs, a universal commitment to the peaceful resolution of disputes and a prohibition on the threat or use of force against each other.

The United States enjoyed great wealth and international power under the UN system it devised. But in the post-Cold War era, power-hungry U.S. leaders came to see the UN Charter and the rule of international law as obstacles to their insatiable ambitions. They belatedly staked a claim to universal global leadership and dominance, relying on the threat and use of force that the UN Charter prohibits. The results have been catastrophic for millions of people in many countries, including Americans.

Since the U.S. has invited its friends from around the world to this "democracy summit," maybe they can use the occasion to try to persuade their bomb-toting sponsor to recognize that its bid for unilateral global power has failed, and that it should instead make a real commitment to peace, cooperation and international democracy under the rules-based order of the UN Charter.

More on foreign policy and the global political struggle: