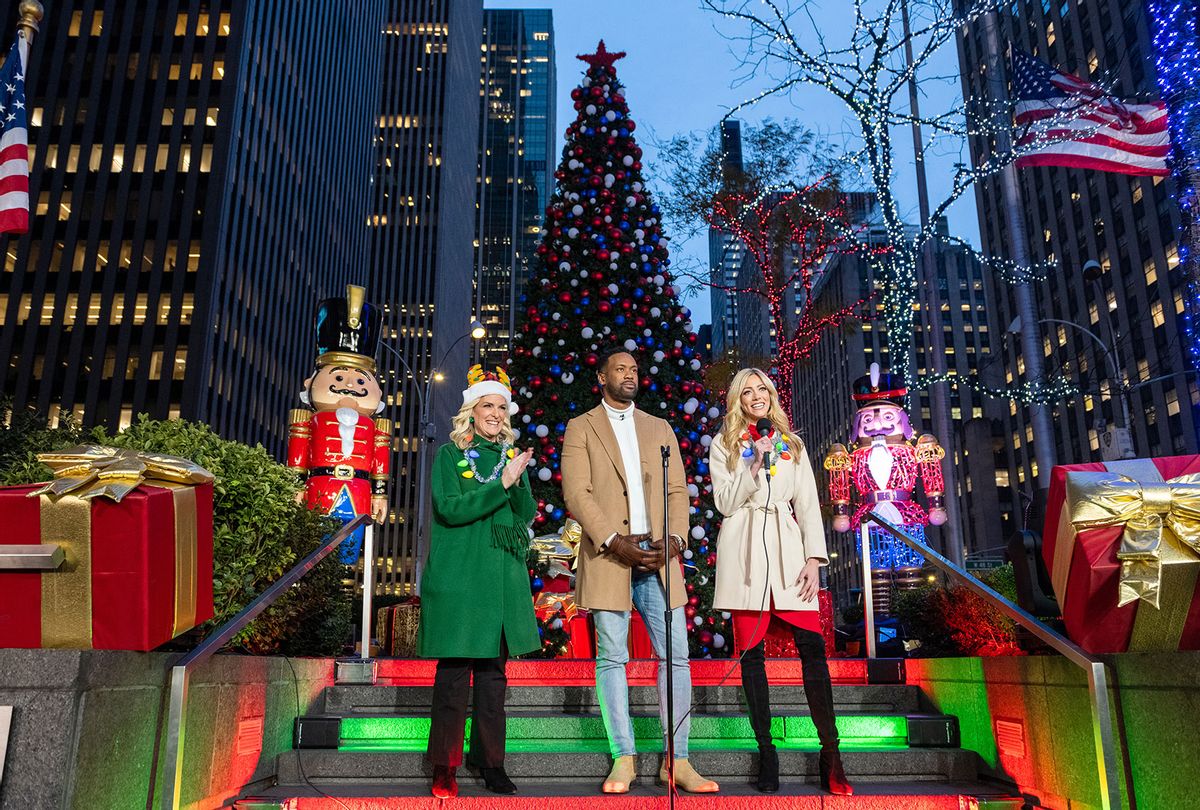 Janice Dean, Lawrence B. Jones, Abby Hornacek at the new All-American Christmas Tree lighting outside News Corporation at Fox Square on December 9, 2021 in New York City. The original 50-foot tree displayed on FOX Square in Midtown Manhattan was allegedly set on fire by a man during the early morning hours of December 8, 2021. He was later arrested. (Alexi Rosenfeld/Getty Images)
--

After a Christmas tree was set ablaze outside Fox News' New York City headquarters, network hosts were quick to blame the culture war for inciting the incident — labeling it as part of a much larger war on Christmas – and on Fox News specifically.

The juxtaposition of the over-the-top coverage with Fox hosts' dismissal of other dangerous situations, including the Jan. 6 Capitol riot, was not lost on "The Daily Show" host Trevor Noah, who took aim at the network in a satirical video posted to Twitter.

"Remembering Pine-Eleven: The Attack on the Fox News Christmas Tree," he wrote.

In the clip, dramatic instrumentals play behind clips of Fox hosts and commentators lamenting the loss of "America's tree" – the 50-foot-tall artificial tree that sits just outside of the NewsCorp. building in Manhattan. The network has only been putting up the tree since 2019.

"It's about evil!" proclaims conservative host Jeanine Pirro in one of the clips, referring to the burning of the tree. "It's about good versus evil! Period."

The video then takes a hopeful turn, as hosts and guests announce that the network will rebuild the tree. Ainsley Earhardt, co-host of Fox & Friends consoled viewers, promising that the network would "build it back better," borrowing the phrase from the Democrat-led economic recovery bill that Republicans have been trying to kill for months.

The video closes with a black and white shot of the tree, ablaze, with "Pine-Eleven, Never Fir-get," written over it.

The suspect behind the fire, 49-year-old Craig Tamahana, was arrested at the scene. He was later charged with arson, reckless endangerment, criminal mischief and trespassing, among other charges, and placed on supervised release, according to the New York Police Department.

Notably, the NYPD has said it found no indication that the arson was politically motivated — but that hasn't stopped Fox News from reporting it as such.

"Apparently lighting a Christmas tree on fire is not a hate crime," said Fox & Friends' Steve Doocy to his co-host Brian Kilmeade.

"But it is!" Kilmeade replied. "Who says it's not a hate crime against us – against Fox News?"

Kilmeade also tried to link the incident to Democratic policies – in particular to the idea that the country is facing a nationwide crime surge in which "no person is safe" and "no city is safe."

"There is so much crime in places that were always safe, including 48th and Sixth here," he said. "This is emblematic of these cities out of control, defame and defund the police, and this bail reform that has these men and women, these assailants, these suspects out before they can even finish the paperwork."

RELATED: It's not even Halloween, and Republicans are already claiming Biden is "stealing" Christmas

"This is what you get when you have these left-wing D.A.s…running these cities," he added. "You get chaos."

On Fox Business, Stuart Varney echoed the sentiment, saying that the fire is "just another example of [Democrat-run] big cities" being "out of control."

Tucker Carlson took the symbolic meaning of the tree burning even further, labelling it as "an attack on Christianity" and an "assault on religious observance."

"This isn't just a matter of people setting fire to balsam firs," said Tucker Carlson on the night following the fire. "A Christmas tree is a symbol."

RELATED: There is (still) no "War on Christmas"

"We will not let this deliberate and brazen act of cowardice deter us," she said. "We are in the process of rebuilding and installing a new tree as a message that there can be peace, light and joy even during a dark moment like this."

The new tree was put up on Thursday, less than 48 hours after the original tree was torched.