Salon talks with Raekwon about his memoir and stories "too hard, too grimy" for "Wu-Tang: An American Saga" 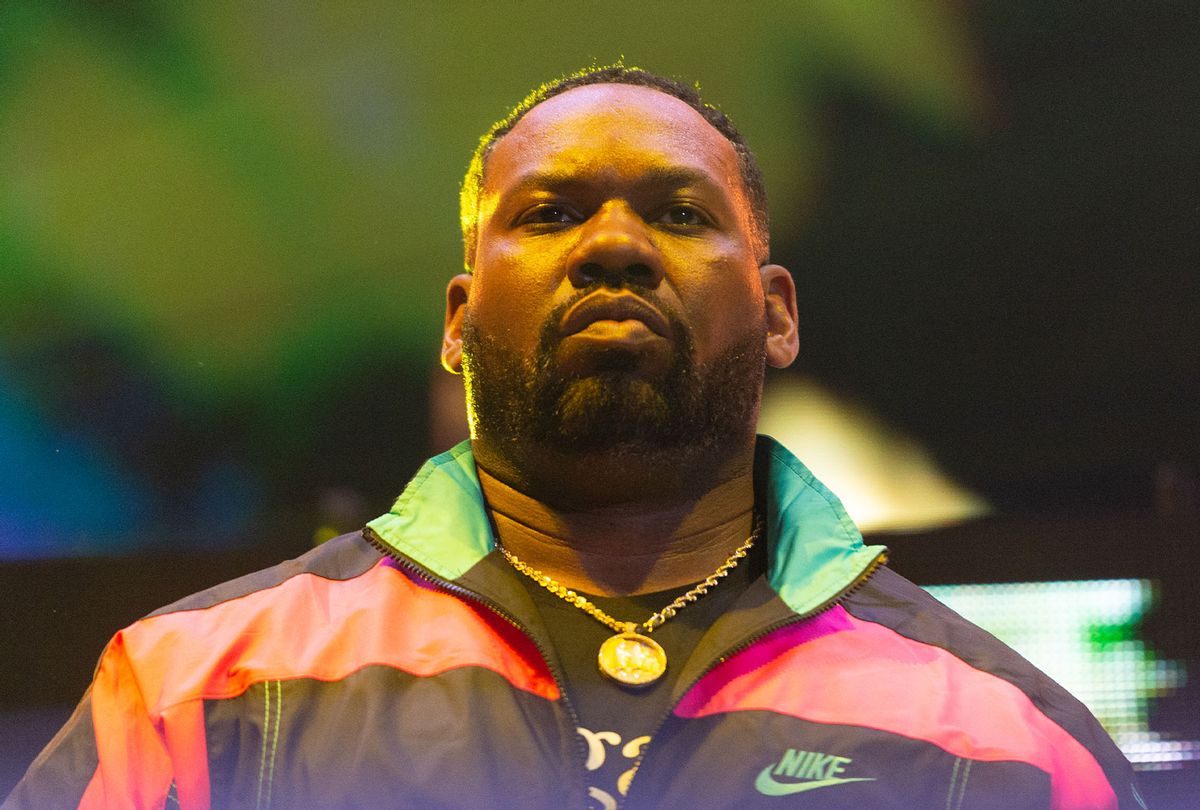 Corey Woods, aka Raekwon, of Wu-Tang Clan performs live on stage during the 'Gods of Rap' Tour at The SSE Hydro on May 11, 2019 in Glasgow, Scotland. (Photo by (Roberto Ricciuti/Redferns/Getty Images)
--

"I met my father once." Hip hop icon Raekwon begins his memoir, "From Staircase to Stage," with this line. The talented lyricist and cofounding member of the '90s mega-group Wu-Tang Clan, known on stage as The Chef, didn't have a relationship with his father. When we sat down recently for a conversation about his book, music, career and life, he talked about how his desire for male camaraderie, informed by that absence, impacted his journey into music.

Raekwon is opening up now about his upbringing for his fans and a younger generation, some of whom have been introduced to him through "Wu-Tang: An American Saga," the Hulu series loosely based on the group's early days, now in its second season.

"I went a little bit more in depth with things that I would've wanted to be in the series, but it might have just been a little bit too hard or too grimy or too much," he said of his book, now available from Gallery. "The most important thing was to do it and let it be from the heart. Something that's real, but at the same time, something that gives these youngsters some hope."

Hope is all Raekwon had. Born Corey Woods in Brownsville, New York, in 1970, Raekwon had a loving mother, extended family and a community who cared for him dearly, but that didn't protect him from the societal ills that Black men born in the '70s and '80s in underserved urban communities faced. Police brutality, poor housing, poor schools, food deserts, limited opportunities, racism, gang violence, and fatherlessness — all fell on Raekwon's head before middle school.

When he was six years old, a big cousin said to him, "We are taking you to see your father today." Happily, Raekwon followed him for two blocks to his father's home. His dad walked out, gave Raekwon a giant hug, and said, "You want to meet your grandma?" Raekwon walked another block or so behind his father to meet his grandma.

It was an exciting day of firsts –– a day that could've changed the trajectory of Raekwon's life. He'd have a grandmother to add to the love he already had at home, plus a dad to teach him the streets — how to navigate the blocks, the shooters, the users, the peer pressure, the cops and every other trap waiting impatiently to bind up Black inner-city kids. Raekwon's dad represented hope, but that hope didn't last. While Raekwon sat with his grandma in the kitchen, his dad said he was heading to the bathroom, then slipped out the door and out of his life forever.

"I always wanted to have a male figure to talk to and emulate what they were doing," Raekwon said. "My mom had to work, and she left me to be in the streets, around whatever was outside, so you know, once you walk out that door, you learn everything according to the streets"

Raekwon's verse on the single "C.R.E.A.M," from Wu-Tang's 1993 debut album "Enter the Wu-Tang (36 Chambers)," blew him into mainstream. The streets almost instantly took to Wu-Tang's unorthodox style of gritty street raps cut with clips of kung fu and karate flicks.

"Wu-Tang came at a time where things wasn't the way they are now," Raekwon said. "You had to work a little harder. The crew was tighter. It was something about having a team back then. If you had a team, y'all was strong. You wanted to represent and see all your brothers win. You had groups out there before us, but not nine dudes."

Method Man, who had released his eponymous hit single a few months before the album came out, was clearly the group's break-out star. But it was the hustlers, the slicksters and money-getters alike who saw themselves in Raekwon and connected most to him.

It is important to know if you weren't there, and to remember if you were, that the aesthetic of the early '90s was dusty. The dustier you were, the more positive attention you received. This was the uniform in most east coast urban areas: baggy carpenter jeans that swallowed scuffed Timberland boots, or Timbs — mainly the wheat-colored Buttas, or Beef and Broccolis, the brown and green. Tops were Polo, Nautica, Hilfiger — CHAPS if you were cheap, or broke and needed something new. These items came brand new from department stores, out of the back of a booster's Chevy Blazer or straight from your homeboy's closet.

The drink was Colt 45 or Old English or Bud Ice or Seagram's Gin or E&J Hennessy or Remy if you had some extra money. The blunts were Philly or White Owl, the weed was called Arizona and always seemed to have small traces of buzzed orange hair in it, the snacks were Cheetos and Now and Laters and Laffy Taffys, and the combination of all — the big clothes, the hard booze, the tattered boots, the sticky snacks, the harsh weed, the blunt guts and everything else was dusty. 1994 was dusty. Raekwon managed to shine like diamond, and that set him apart.

Wu-Tang wasn't dirty, but that's what the early '90s was. The RZA performed in dark army gear and stocking caps; Method Man shot a video with half of his braids undone; Ol' Dirty Bastard, wielding 40s of Olde English, had it right there in his name. But not Raekwon. While many in the group excelled at griminess in a grimy era, Raekwon sported 360-degree waves, clean Timbs or fresh sneakers, and a bright gold and diamond figaro link chain that sat on top of his crisp Nautica shirts. Raekwon came on the scene clean, and he knew it.

"A hustler don't stack his money, he shows it on himself for the world to see," Raekwon writes of his early success. "I started making the rounds at different stores too: Saks Fifth Avenue, Lord & Taylor, Barneys."

In the book, Raekwon reflected on the group's evolution as a crew and as individuals as they saw massive success. "As we got on, things start to transition. Egos, money issues, family issues, things of that nature, being a businessman, putting that hat on. Something totally different from being in the streets just a couple of years before that."

In "From Staircase to Stage," Raekwon writes about his adolescence growing up in the Park Hill section of Staten Island: "A beautiful place, but also a dangerous place," full of experienced street dudes who specialized in crack sales, robbing and murder. The beautiful parts of Park Hill allowed and even challenged Raekwon to fall in love with hip hop culture, to connect with future Wu-Tang members, to hone his craft, to see himself as being more than a street guy caught up in a drug game — and to dream outside of Park Hill. The dangerous parts of the same neighborhood slam-dunked Raekwon right into the middle of the drug trade where he warred with other blocks, drug crews and the NYPD during his turbulent adolescence.

"Everything we learned was basically through older dudes in the hood," Raekwon shared with me. "Some hustlers and stick-up kids, but they loved us, they embraced us, they wanted the best for us."

It was Park Hill where Raekwon left his mother's home, when her boyfriend made fun of him because of his lack of formal education and how he hung around in the streets all day. Instead of being a father figure and sharing survival skills, his mother's boyfriend took the opportunity to chastise Raekwon for not having the guidance he needed. Raekwon challenged his mom, asking her to take up for him, but she saw that as disrespectful and ended up kicking him out.

In this moment the rapper dived deep into the spiral of pain, hopelessness, and violence that made up the content of most of his early raps. Those stories and pain still resonate with many fans. His rhymes speak to the deep pain of the fatherless generation. In "From Staircase to Stage," Raekwon bravely takes readers on his emotional journey, beyond what we think we know, right into the center of the reality of a kid who was not supposed to make it.

Twenty-eight years later and Raekwon is revered as one of the most distinctive voices in rap and a standout member of the Wu-Tang Clan. At 51, he's a platinum-selling artist, a record executive, owner of Licataa wine company and founder of Ice H2O records. He is a sought-after collaborator, appearing on tracks with the some of the biggest acts in hip hop, including OutKast, Nas and Kanye West. He is recognized as a pioneer of the Mafioso Rap style, where his thick, tangled lyrics, full of luxuries and gangster references, syrup over tracks in a way that was so real, so poignant, that it's still mimicked to this day.

But the question is, how did he do it? How did he make it this far from poverty without a dad or stable household? The answers to that question and more lie in between the pages of his memoir, a harsh, but honest account of the other side of musical fame. Those moments include the time a guy who was jealous of Wu-Tang's success shot at them, hitting U-God's son; the group member who slept with a fan he met on the road and woke up to his money and Mercedes missing; and the tour when their bus was raided by racist Canadian Mounties in a way that was "unusual for musicians coming into Canada" because they were young Black men.

"I had never been a guy that really just let people into my private life like that," Raekwon told me. "But being that we have so much history in the game, when I think about this young generation, I think it's important that guys such as myself write a book about our stories and our times of being out there in the street, dreaming for this kind of platform."

More interviews with and about the Wu-Tang Clan: