Sophia Chang, author and former manager to members of the Wu-Tang Clan, offers her perspective on O.D.B.'s death 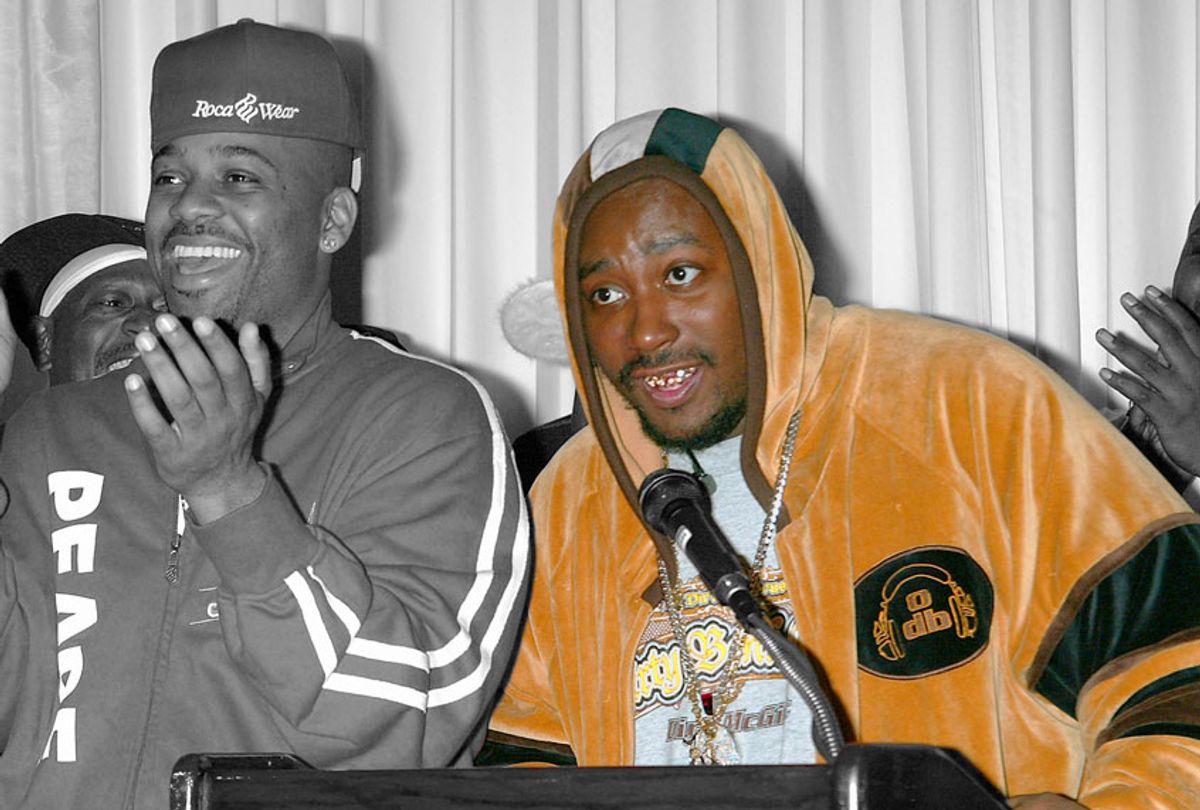 Damon Dash, CEO of Roc-A-Fella Records, and rapper Ol' Dirty Bastard (aka. ODB & Dirt McGirt)(R) attend a news conference to announce ODB's signing with Roc-A-Fella Records at the Rihga Royal Hotel May 1, 2003 in New York City. The controversial rapper was released from prison earlier today after being incarcerated for over two years. (Scott Gries/Getty Images)
--

Sophia Chang is finally coming into her own as a media personality. For decades, she worked behind-the-scenes helping famous men advance their careers as a record exec, producer, and manager, including for the Wu-Tang Clan’s RZA, GZA, and O.D.B., A Tribe Called Quest, Raphael Saadiq, and D’Angelo. And now, in her new Audible Original memoir, "The Baddest Bitch In The Room," she shares all the lessons she learned in the trenches of the music business and how she fought to finally put her own talents center stage.

When Chang recently came on my podcast "Poptarts" to discuss her memoir, our conversation was wide-ranging. But I made sure to avail myself of the opportunity to get clarity on an issue that had been puzzling me for the last 15 years.

Multiple interviews, documentaries, and series have been released about the legendary Staten Island-based hip hop collective known as the Wu-Tang Clan, including two that just debuted this year: Showtime's "Wu-Tang Clan: Of Mics and Men" and Hulu's "Wu-Tang: An American Saga."  And amid these chronicles, there have been multiple conflicting narratives about what factors led to the overdose death at age 35 of founding member and Chang’s close friend, Ol’ Dirty Bastard (aka O.D.B.), in 2004.

“In the documentaries about the Wu-Tang Clan, there are some journalists who say, ‘they’re a family’ and ‘their love was very deep and real’ and ‘they looked out for each other,’” I told Chang. “But then there are those who say that O.D.B. was schizophrenic, he was very sick, and though he experienced severe trauma when he was incarcerated [from 2000 to 2003 for drug and traffic offenses] nobody came to his aid. Nobody helped him, nobody visited him, and his attempts to self-medicate as a response to this trauma led to his death. Is it possible some of that trauma could have been alleviated if members of Wu-Tang have been more supportive of him when he needed them?”

“I know, hindsight is always 20/20, and I would never put blame on anyone, but the competing narratives are confusing," I said. "I’m wondering, as an insider, if you could address those conflicting stories.”

“I think what speaks best to that is the eulogy RZA gave at his funeral,” Chang replied. “You know, RZA got up at the funeral and stood in front of hundreds of people and said, ‘When I think about Ason,’—because that’s what he called him, Ason Unique—‘I will take part of the blame because Dirty said to me, Yo, I’m dying, and I didn’t pay attention. I just kind of [thought], Oh, that’s just Dirty. Ya know? He’s just saying that.’ And probably a number of people feel that way.

"I really want to break open the conversation around substance abuse, addiction, mental health, and suicide in hip-hop, and more broadly, in the Black community—and I can certainly say this about the Asian community as well," Chang continued. "Mental illness is so stigmatized and it’s not something people speak about openly. But there’s a whole generation of rappers and their fans who think it’s OK to brag about taking prescription drugs.

"I don’t know that there’s such a thing as someone who ‘casually’ takes opioids. There are a lot of opioid addicts out there, and we will continue to lose talent unless we break open this conversation and address it and have people talk about it openly. Mental illness is an illness. Depression is an illness. Addiction is an illness. If we look at it as a weakness—that’s not going to work. We have to stop stigmatizing it. People either have addictive personalities or they don’t. O.D.B., God rest his soul, had an addictive personality.

“Could you imagine being so addicted to a substance that you have to use it just to feel f**king normal?” she continued. “But also, there are people in this industry who want to stay on the gravy train. So rather than going to [a famous person] and saying, ‘Honey, I think you’ve got a problem, I think we need to talk about it,’ they stay silent because they’re so afraid of jeopardizing access to the good life. That’s why, a lot of artists surround themselves with sycophants. They get narcissistic, they get big headed, they get egotistical, and they don’t necessarily want to hear someone say, I don’t know about that. There’s just a whole culture that I think is really scary where these issues are not addressed.”

Listen to our entire interview, in which Sophia Chang opens up about how Wu-Tang led her to explore Shaolin kung-fu, her feminist journey, and her decision to make her private life story public, here or on the Bust website, where you can subscribe to "Poptarts."