A "talking" cat is giving scientists insight into how felines think

Cats are being taught to communicate using a button-word system. Scientists are listening closely 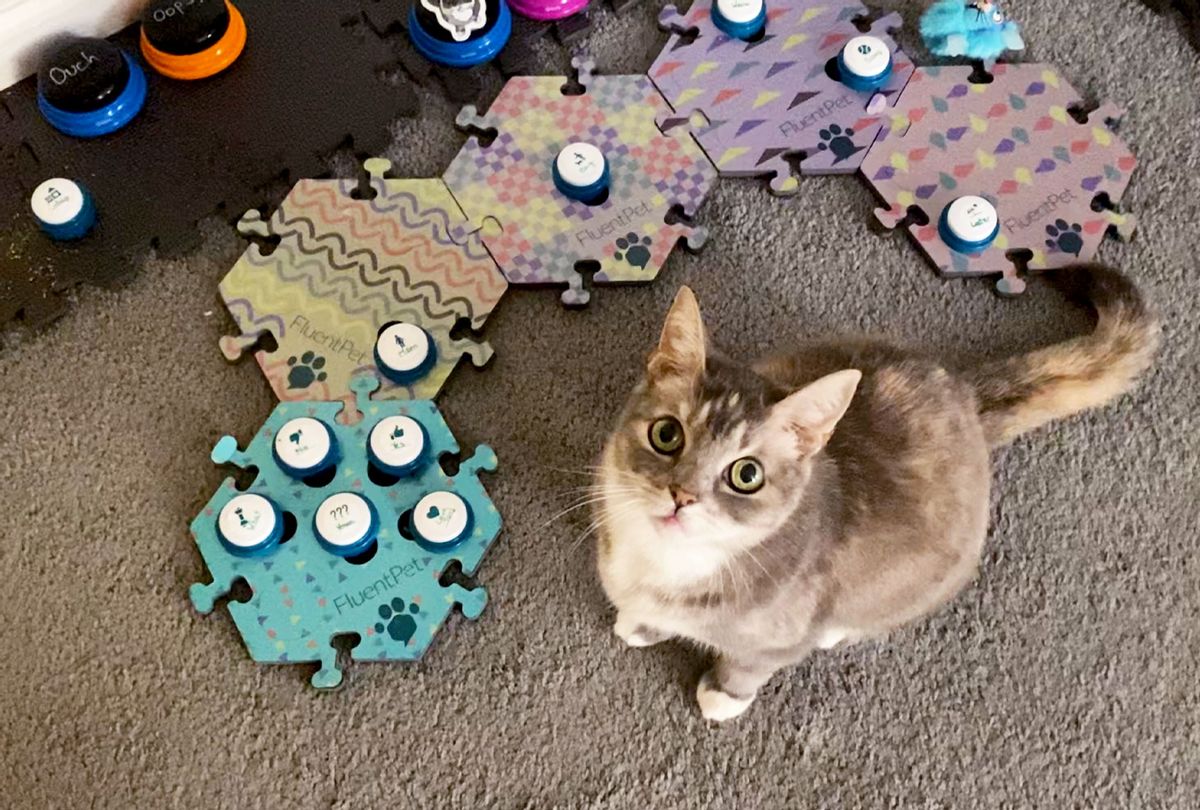 Billi, a 13-year-old domestic cat in Florida, presses a button that voices the word "dog" — twice.

She proceeds to sit as if she's waiting for her human parent, Kendra Baker, to respond.

"Dog outside, hmm?" Baker asks Billi, via the buttons. A few minutes later, Billi presses another button for "tummy," twice.

"Accident or premeditated murder? You decide," Baker writes on the caption of the video on Instagram.

Those who follow the travails of internet-famous "talking" animals may be familiar with Bunny the Talking Dog, a TikTok- and Instagram-famous pet. Just like Bunny, Billi the cat uses an augmentative and alternative communication (AAC) device — essentially, a sound board made up of buttons with a different word vocally recorded on each — to "talk" to her human, Baker. Baker, like Bunny's human parent, was inspired to attempt this means of animal-human communication after she observed Christina Hunger, a speech-language pathologist, who taught her dog Stella to use an AAC device.

Of course, unlike Bunny and Stella, Billi is a cat. And while dogs, as social animals, are renowned for being able to understand human speech, cats are a different matter.

That didn't stop Baker. At the start of the pandemic, when she found herself with extra time on her hands, Baker decided to order an AAC device to see if Billi could "talk," too.

"At that point Billi was the first cat that I knew of to try it," Baker tells Salon. "I hadn't seen any cats do it."

"I was concerned because they [the buttons] were quite large for a little tiny kitty, and I was not sure that she was actually going to be heavy enough to press them," Baker said. "So I started with a word that I'd really not recommend that you start with, which is 'food,' because it becomes very motivating for them. And Billi loves food."

Baker's concerns quickly washed away once it became clear that Billi was able to press the button "food" — which she appeared to enjoy doing perhaps a little too much.

"She was definitely heavy enough for it," Baker said. "And then I later regretted starting with food because it kind of backfired on me, but it definitely got the ball rolling."

Today, Billi has 50 words on her board, and — like Bunny — is part of the ongoing research project called TheyCanTalk, whose goal is to understand if animals can communicate with humans through AAC devices. While the study is mostly made up of dogs, about 5 percent of the animals using AAC devices are now felines. It turns out that many cats have been successful at using the device.

Leo Trottier, cognitive scientist and founder of How.TheyCanTalk Research and developer of the FluentPet system Billi uses, admitted to Salon he was "pessimistic" about cats using the buttons, but was pleasantly surprised when they started to see felines catch on. Now, he's intrigued by the ways in which cats appear to use the buttons differently from dogs.

RELATED: Bunny the "talking" dog is reporting her dreams, opening up a scientific debate

"What's interesting is that they [cats] tend to not do that much in the way of multi-button presses, but there's like a lot of single-button presses," Trottier tells Salon. "With cats, you kind of have to find things they really want, and there are just fewer of those than with dogs."

Baker agreed that Billi appears to string words together less frequently than dogs. For example, Bunny is often putting together what appears to be sentences like "night talk sleep," which Bunny's human interpreted as the dog's attempt to communicate that she was having a dream. But Baker has a theory on why cats, like Billi, might be more prone to pressing one button to communicate.

"She does string words together, but it is much less frequent than what I see some of the dogs doing, and I don't know exactly why that is but I will say she's more deliberate in her button presses," Baker said. "Billi is very, very deliberate when she presses a button and knows exactly which one she's looking for, she takes her time . . . and if she is going to string a sentence together, she'll take a thinking loop and then she'll come back — very rarely does she go from one directly to another."

Could it be that in observing cats use the AAC device, humans are finding out that the stereotypical differences between cats and dogs are actually true? Perhaps, but researchers have been very cautious to jump to any conclusions about these "talking" animals yet. In fact, it's up for debate if these animals are, scientifically speaking, speaking — or if they've simply been trained to use specific buttons to conjure specific things. Whether or not their communications are spontaneous has yet to be concluded.

Still, the spectacle of an animal talking through speakers is fascinating to observe, and researchers are excited by the prospect that cats are part of the project now.

"I'm very intrigued by the cats that are using the boards, because there's really a dearth in cat cognition studies, particularly those that happen in the home," Gabriella Smith, a cognitive science researcher at CleverPet. "Cats are really kind of overlooked in the companion animal cognition world. I've been a big fan of Billi, and my animal cognition scientist brain just lights up because I see these behaviors that I know from my own cat — but now I'm able to look at it from a cognition lens."

Smith added that having cats as part of the TheyCanTalk study is a great way to study their cognition — and also, perhaps, dispel myths about cats.

"They have this reputation of just doing what they want and not really caring what the humans are doing, and I think this is a great opportunity to see that they actually are paying attention," Smith said. "Seeing that they can be engaged, that they're not just cat automatons, that aren't driven by instinct 24/7 can function a great deal positively for their role in other studies."

In some ways, including cats in the study has opened the door for other species too — like birds. Indeed, some birds are notorious for their ability to mimic and learn humans words, so their addition makes sense.

Regardless of what these studies ultimately tell us about cat cognition, Billi's owner has observed a noticeable shift in Billi's happiness since introducing the buttons to the talkative kitty.

"I really believe that the majority of house cats are bored and depressed," Baker said. "We don't give them any stimulation . . . and if this pandemic has taught us anything, it's that staying inside your house all day is terrible. So you know, anything that we can do for them that gives them a better life, I'm for it."