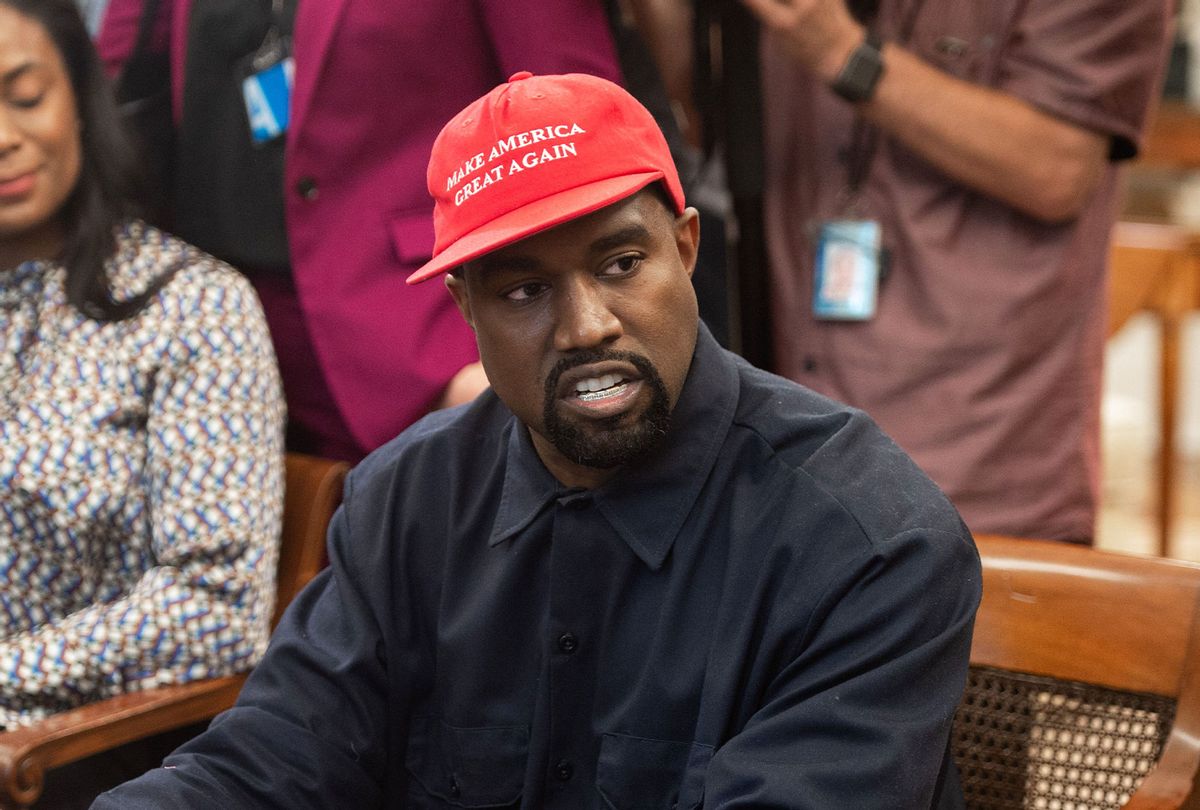 Rapper Kanye West speaks during his meeting with US President Donald Trump in the Oval Office of the White House in Washington, DC, on October 11, 2018. (SAUL LOEB/AFP via Getty Images)
--

West, a longtime friend of former President Donald Trump, launched his dubious bid in the summer of 2020, although he did very little actual campaigning and failed to get on the ballot in most states. The New York Times reported last year that Republican activists in at least a half-dozen states were involved in getting West's name on the ballot, raising suspicions that the effort was intended to siphon Black voters away from Joe Biden. If that was indeed the plan, it was not effective: West only ended up getting about 67,000 votes nationwide. After Trump lost the election, West's publicist flew to Georgia to unsuccessfully pressure a local election worker targeted by Trump to back up his false claims about the election, though the publicist denied that she was "associated" with West at the time.

The new documents, revealed in a lawsuit from a vendor accusing the campaign and consultants of a breach of contract, show that West's campaign appears to have disguised "potentially millions of dollars" in services it received from a "secretive network of Republican Party operatives," according to the Daily Beast. The campaign did not report some of the payments, which campaign finance experts told the outlet appear designed to conceal the Republican connections and could represent a violation of federal law.

The documents suggest that Jill Vogel, a Republican Virginia state senator and longtime political operative, and her law firm Holtzman Vogel, played a central role in West's campaign while it also represented Trump in a Pennsylvania lawsuit ahead of the election. The firm also has ties to the Honest Elections Project, a conservative dark-money group pushing voting restrictions around the country. The West campaign also paid $60,000 to the Minnesota law firm Mohrman Kaardal in December 2020 after it filed a lawsuit baselessly alleging election fraud. That firm is also linked to the Amistad Project, a right-wing legal group that challenged the election results and worked with Trump attorney Rudy Giuliani. A month after the election, the West campaign paid $152,000 to the law firm BakerHostetler, which also works for the Republican National Committee. Sources who spoke to the Daily Beast also speculated that West may have been coordinating with Trump son-in-law Jared Kushner, who met with West at his Wyoming ranch before his campaign launch.

"It's very clear that the whole point behind Kanye's campaign was to try to re-elect Donald Trump," Jordan Libowitz, a spokesman for the government watchdog group Citizens for Responsibility and Ethics in Washington, told the Beast. "Whether that was a goal of Kanye is another issue. But he was clearly seen as a way to steal potential votes from Biden."

"The importance of disclosure in this matter can't be overstated," he told the outlet. "It's no secret that Kanye West's candidacy would have a spoiler effect, siphoning votes from Democrat Joe Biden. Voters had a right to know that a high-powered Republican lawyer was providing legal services to Kanye — and federal law requires disclosure of such legal work."

West campaign sources, including lawyers who represented it, told the Daily Beast that they had been solicited by outside Republican operatives.

"I can tell you that he did not seek me out. Somebody else did," Arizona attorney Tim La Sota, who represented the campaign, told the outlet.

The documents were included in a lawsuit filed by former campaign subvendor SeedX, which alleged that the campaign failed to pay it to build and maintain its website and merchandise operation. The documents include hundreds of pages of communications with campaign officials and contractors. The lawsuit was initially dismissed because it was filed in the wrong jurisdiction but the company plans to refile the suit in the correct venue soon, according to the report.

The documents show that Vogel began advising the West campaign on legal issues by at least August 2020, although a source told the Beast that Vogel had been "basically behind it all" since the previous month, when the campaign launched. Vogel has extensive ties in Republican politics. Her law firm has worked for Karl Rove's  super PAC American Crossroads and the Senate Leadership Fund, which is tied to Senate Republican leader Mitch McConnell.

"She is a name that comes up a lot when you're looking at right-wing money operations in general, tied to a lot of major players," Libowitz told the Daily Beast. "She and her firm have ties to people like [the Federalist Society's] Leonard Leo, just really big Republican money." He added that Vogel may have sought to keep her name off the West campaign's filings to avoid "any embarrassment that may come with being publicly affiliated with the trainwreck that was the Kanye campaign" and because "she did not want people to know that a Republican operative was behind his campaign."

None of the West campaign's filings to the Federal Election Commission mention Vogel or other Republican operatives who worked for the campaign, even though Vogel described herself in multiple texts and emails to SeedX as the "campaign lawyer."

Whatever the reasons were for omitting Vogel's name from FEC filings, the failure to disclose her work could run afoul of election laws.

"If an outside group was paying for them, that needs to be disclosed as an in-kind contribution, and if that's the case you would immediately run up against limits," Libowitz told the Beast.

Ryan added that "if Holtzman Vogel's legal services extended beyond compliance with federal campaign finance law to other matters, then the value of those services would constitute a potentially-illegal contribution to Kanye's campaign."

John Boyd, a consultant for West, denied that the musician had been manipulated by Republican operatives but acknowledged that the campaign was disorganized and that West did not fully control his operation.

"He had companies, individuals working for him, I don't even know if he knew what they were doing that deeply. That's my personal view," Boyd told the Daily Beast. "There were definitely agendas out there that perhaps he didn't have full control over."

Libowitz said it was evident that Republicans involved with his campaign had ulterior motives. "So many of these firms work for major Republican organizations, and they are not doing this for him out of the kindness of their hearts," he told the outlet. "It's pretty clear Kanye was a GOP plant, whether he knew it or not."

Read more on Kanye 2020 and its inglorious conclusion: