Was the Republican scheme to push sham candidates funded by the nation's largest electricity retailer? 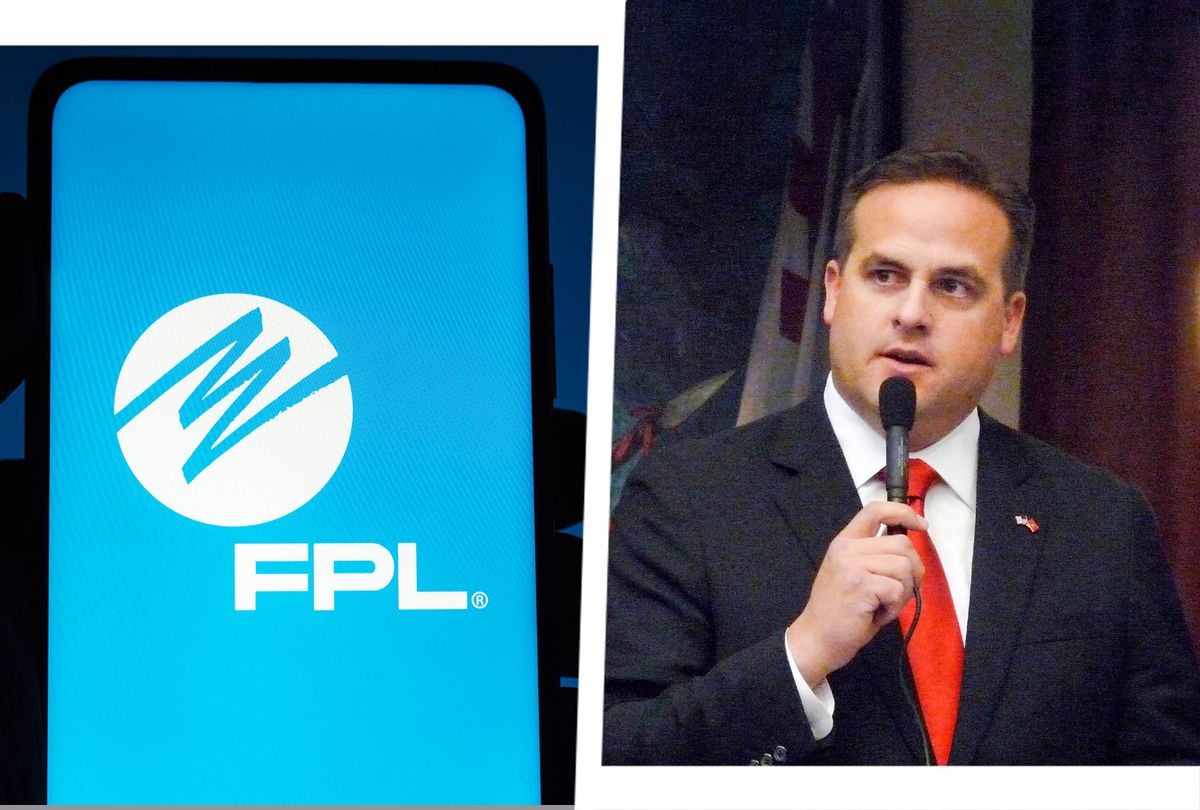 Back in March, Frank Artiles, a former Republican Florida state representative with strong financial ties to the utility industry, was arrested on suspicion of orchestrating an election fraud scheme that helped oust one of Florida's most prominent climate advocates, former state Sen. José Javier Rodríguez, a Democrat.

According to investigators, Artiles reportedly paid an auto salesman with the same surname as Rodríguez to run as a third-party "ghost" candidate against Rodríguez and his then-Republican challenger, state Sen. Ileana Garcia. Farcical as it sounds, it worked. The auto salesman, despite never campaigning, likely siphoned off 6,300 votes from Rodríguez's re-campaign to ensure Garcia's victory.

Now new revelations suggest that Artiles, the alleged mastermind, may have just been the tip of the iceberg.

This week, the Orlando Sentinel reported that there was likely an entire ecosystem of corporate and political entities propping up sham candidates in the 2020 Florida state Senate races. Records reviewed by the Sentinel indicate that Florida Power & Light (FPL), the country's largest electricity company, helped coordinate three separate ghost candidates – one of whom was Rodríguez – in order to bolster its own business interests in the state legislature. From 2016 to 2020, FPL reportedly made a series of transactions totaling over $3 million to Denver-based dark-money nonprofit "Grow United," whose name was changed from "Proclivity" last year. In October of 2020, Grow United gifted two Florida political committees – "The Truth" and "Our Florida" – with $550,000 to finance the mass delivery of political mailers supporting three unaffiliated candidates in three districts. Thousands of these mailers – all of which featured identical language blasting "party line" politicians as "puppets," according to Politico – bombarded voters.

It was "a coordinated dark money effort to siphon votes from Democratic candidates," Anders Croy, a Democratic caucus' spokesman, told The Miami Herald.

According to the Sentinel, a printing company with ties to Florida GOP strategist Alex Alvarado was in charge of producing the mailers themselves. Incidentally, Alvarado's data intelligence firm was paid hundreds of thousands of dollars by political groups with ties to Associated Industries of Florida, a business lobbying group that represents FPL.

Alissa Jean Schafer, a research and communications manager at the Energy and Policy Institute (EPI), a utilities and energy watchdog, told Salon that FPL's presence in this opaque web of nonprofits, companies, and political committees is completely unsurprising.

"It's a huge opportunity for FPL, given the political landscape, to flex their political power on spending, important relationship-building, and direct political contributions before you even get to the stuff where it's a little bit more shady and buried in levels of political committees," Schafer said in an interview. "If you look at the comments that the company makes, for example, in their quarterly reports, they talk about Florida as being a friendly regulatory environment. And that is very intentional. It's a result of the work that they have done to control the political environment."

Schafer, who has been following FPL's apparent skullduggery for several years now, noted that the company has several levers of power when it comes to keeping Florida's legislature on the side of businesses rather than consumers.

One lever is exerting influence over the Florida Public Service Commission (FPSC), a five-member panel tasked with regulating the business practices of utility and telecommunications corporations throughout the state. A large part of FPSC's job is to keep FPL in check because the company has a monopoly on the state's utilities market. This is why the FPSC decides what rates the company is allowed to fairly charge its customers – a process that involves extensive accounting of the company's yearly costs.

Throughout 2019 and 2020, the FPSC approved numerous rate increases for FPL, Tampa Electric Co., and Duke Energy. Just this week, the FPSC likewise voted to let FPL collect an additional $810 million from customers in 2022 to account for the increasing cost of natural gas nationwide. According to The Daily Herald, FPL intends to increase the cost of electricity for its customers by roughly 20% over the next four years.

While there have been some instances in which the commission sides with consumers, it's hard to argue that the FPSC is insulated from corporate interests. After all, its five commissioners are appointed by the governor and confirmed by the state Senate, which makes its composition a product of politics, Liz Veazey, Policy and Rural Energy Director at Solar United Neighbors, told Salon.

"When you're solely focused on profits over people, there's no limit to what utility companies will do to preserve their energy monopoly," Veazey told Salon by email. "The substantial influence that FPL and Duke Energy have over the state legislators and the governor … reduce[s] the ability of the government to fulfill its oversight role."

On top of lobbying, companies like FPL can also launder their interests through more public channels of campaign finance. For instance, while Florida prohibits utilities companies from donating directly to candidates, they can contribute to political action committees that align with business-friendly candidates.

According to The Sentinel, in 2018 alone, FPL made $8 million in campaign contributions to political action committees. But donations like these, Veazey said, "are often only half of the story, and fail to include all of the monies creatively funneled through political committees, political parties and even charitable donations."

FPL, for its part, has vehemently denied any suggestions that it financially supported ghost candidates.

"Neither FPL nor our employees provided funding, or asked any third party to provide funding on its behalf, to Grow United in support of Florida state-level political campaigns during the 2020 election cycle," company spokesperson David P. Reuter told the Sentinel. "Any report or suggestion that we had involvement in, financially supported or directed others to support any 'ghost' candidates during the 2020 election cycle is patently false, and we have found absolutely no evidence of any legal wrongdoing by FPL or its employees."

"Their claim of ignorance of how the money was being spent is not an acceptable excuse for their funds being used to wreak havoc on the democratic process," she added.

It isn't the first time that FPL has come under scrutiny for indirectly financing alleged sham candidates.

In 2018, Florida state Sen. Keith Perry, a Republican, won re-election against Democratic challenger Kayser Enneking, largely due to the candidacy of independent Charles Goston. According to the Sentinel, FPL donated $14.15 million to a political ad nonprofit whose consultants were affiliated with a group that paid for ads supporting Goston.

As curious as FPL's charitable decisions are, it's not hard to see why an electricity retailer would get involved in political funding. FPL is facing a push for rooftop solar. Earlier this year, state Democrats introduced a bill that would have saved schools, businesses, and nonprofit organizations from paying millions of dollars in up-front costs associated with solar installation. Solar United estimated that bill would have added 25,000 new jobs with $4 billion in economic growth. In the end, however, the measure didn't even receive a hearing in the Republican-controlled legislature.

FPL and solar advocates have also locked horns over net metering, a billing mechanism that allows solar users to collect credits for energy they generate but do not use. Currently, net metering is legal in the Sunshine State. But that hasn't stopped Republicans from waging disinformation campaigns that overstate the costs associated with solar. "Utilities are also actively working to spread disinformation about the benefits of solar, imposing outrageous interconnection fees, misrepresenting community solar, imposing unfair minimum-monthly bills on solar customers, and blocking policies that keep solar affordable and accessible," Veazey explained.

Part of the problem with holding utility companies accountable, Schafer said, is that they're playing the long game. Thus connecting something like FPL's stance on net metering to their alleged support of ghost candidates involves untangling convoluted political projects spanning years.

"The process of putting [the] pieces together and understanding this web of dark money non-profits and entities shuffling money back and forth – that is very challenging to keep track of," Schafer said. "A lot of people say, 'I don't get that stuff, that's why I don't like politics.' But that sentiment right there is one of the things utilities companies are counting on. They know that it's confusing. They know that it's overwhelming. Most people just want to switch the light switch and have their lights on."