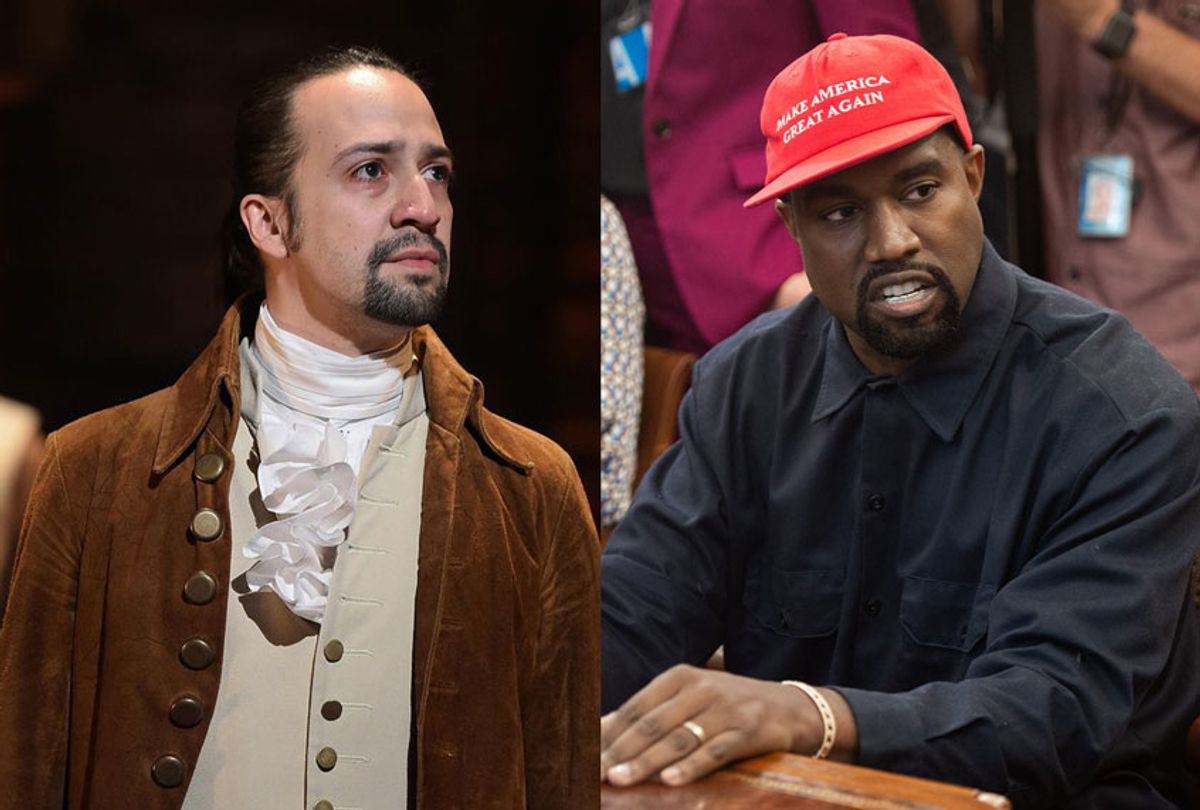 Lin Manuel Miranda as in the Broadway production of Hamilton | Rapper Kanye West speaks during his meeting with US President Donald Trump in the Oval Office of the White House in Washington, DC, on October 11, 2018 (Disney+/Getty Images/Salon)
--

The nation wanted to spend the July 4 weekend transfixed by "Hamilton," dazzled by the wild presidential election of 1800, and imagining a time when politicians argued via pamphlets and long letters rather than 280 character tweets.

And then, of course, Twitter interrupted. We were yanked back into the 2020 race. Kanye West had declared his White House bid. The retweets and replies mounted.

Skeptics noted that West had teased a new album just a week earlier. Doubters with a deeper knowledge of election law than release dates observed how hard it would be to qualify for ballot access in several major swing states. Bloomberg quickly noticed that West hadn't filed any paperwork with the Federal Election Commission.

But that didn't stop the hot takes. Some suggested Kanye would hurt former Vice President Joe Biden by potentially siphoning away young black voters, even positing that Trump and billionaire supporter Elon Musk put him up to a run for exactly that reason. Others actually found polls measuring West's approval rating among Democrats — just 17 percent — and still others wondered if West might drain Trump's own appeal with a subset of black voters.

West has every right to run. But we could have saved ourselves all this agita and instant analysis. We could have enjoyed the holiday weekend and stayed focused on "Hamilton." Ranked choice voting would put an end to the same exhausting "spoiler candidate" debate that begins sooner than you can say Ross Perot, or Ralph Nader, or Jill Stein. It would make our elections better — and would have made everyone's July 4 more relaxing.

After all, we just finished having this same argument in the spring when Michigan congressman Justin Amash — a former Republican turned independent — flirted with seeking the Libertarian nomination, and politicos fretted about whether his appeal to disaffected conservatives and independents would help Trump or hurt him.

Ranked choice voting magnifies the power of voters when faced with more than two candidates in a race. Instead of choosing just one — and having to do a mental calculus as to whether that ballot might end up electing the candidate the voter likes least — everyone puts their choices in order. If no one wins 50 percent, RCV works like an instant runoff. The lowest vote-getter gets dropped and those supporters roll over into their next choice.

With RCV, no one has to worry who is siphoning off votes from whom. Everyone can vote for the person they like the most — whether that's Kanye West, Justin Amash, a Green Party nominee or someone else entirely. And we can knock a certain segment of political hot-take Twitter offline forever.

Let Kanye run. Let anyone run. But let us all vote with RCV.

Now, can we talk about how ranked choice voting might have helped prevent 36 rounds of Electoral College battling in 1800