Justin Amash was hounded from the 2020 race through sheer partisan politics. It doesn't have to work that way 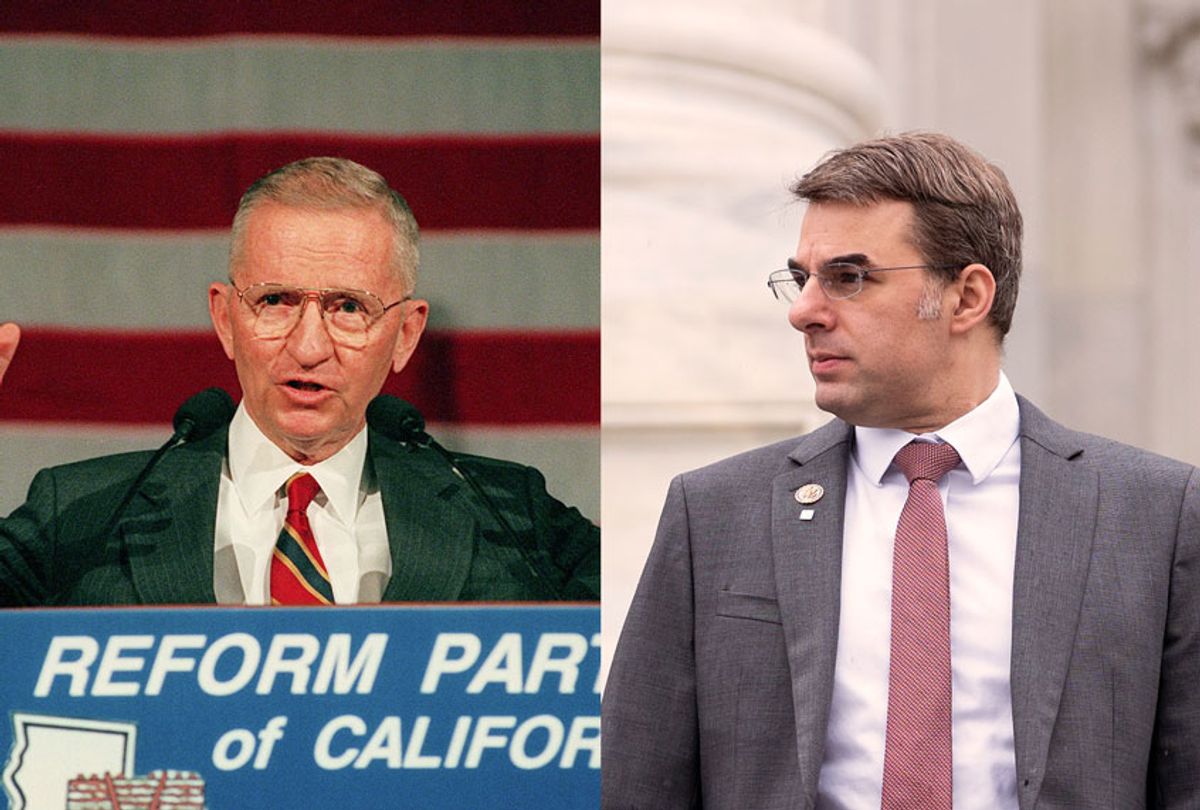 When Ross Perot, the most successful third-party presidential candidate in modern political history, argued against the North American Free Trade Agreement, he memorably described its potential negative effects as a "giant sucking sound."

As Rep. Justin Amash considered seeking the Libertarian Party's presidential nomination, he heard something else. More like a giant hissing sound. Aimed in his direction.

Democrats called the Michigan congressman a spoiler. Republicans he once worked with called him a giant egoist. On Twitter and cable news panels, politicos debated whether the Republican-turned-independent would drain less-government conservatives from President Trump, or anti-Trump conservatives from former Vice President Joe Biden.

When Amash officially announced that he would not run, there was a giant exhalation sound: A massive sigh of relief from Democrats and Republicans alike.

It's easy to understand the passion. The stakes are always high in presidential politics, perhaps never more so than amid a pandemic and a global economic turndown.

Libertarians will still nominate a candidate who will appear on most state ballots, as will the Greens. But now that a third-party challenger as well-known as Amash appears unlikely in 2020, the Democrats and Republicans who fretted that a prominent Libertarian candidate would spoil everything for their side this fall should pick up an insurance policy for next time. We could avoid all this exhausting hand-wringing in 2024 if we simply adopted ranked choice voting.

This isn't just about making life fairer for third parties. Democrats and Republicans would be acting in their own self-interest. We've always had third parties. Many of them have made advanced important principles and improved our politics. And sometimes — as in the case ofPerot in 1992 and 1996, Ralph Nader in 2000, and Gary Johnson and Jill Stein in 2016 — they've also contributed to outcomes where a president has been elected with less than 50 percent of the vote.

Let's fix that. The problem is with a system that allows candidates to win with a mere plurality. That's what ranked choice voting cures. It's why Maine has changed its rules, and for the first time this fall will allow voters to cast a ranked choice ballot for president. It's time for every state to follow.

RCV functions like an instant runoff. Voters don't have to pick one candidate. They get to rank the entire field instead. If someone captures 50 percent in the first round, they win. If not, the candidate in last place is eliminated, and those votes are reshuffled to backup choices. It's a better way to vote, and assures the fairest result.

The fairest result. That's what all those Democrats and Republicans really wanted, ironically enough, as they pushed Amash to the sideline. They wanted to avoid, once again, an outcome where a handful of third-party voters created a plurality winner and tipped the result one way or the other. RCV delivers that outcome. It puts a permanent end to spoilers. It eliminates the possibility of a plurality winner nabbing all of a state's Electoral College votes. It neutralizes third parties as a threat and incentivizes Democrats and Republicans to court their supporters, rather than blaming anyone who doesn't view the contrasts between the two sides as clearly and identically as they do.

Amash is the second prominent independent to stand down from a third-party bid. Last year, Starbucks founder Howard Schultz pondered a run and found the reception icy. Prominent commentators, even some who likely joined him at Aspen or Davos cocktail parties, now derided him as "dangerous" or a "fool," accused him of blackmailing the nation to keep his taxes low, and urged Schultz to take his billions and do something that wouldn't "ruin the world."

Ultimately, neither Schultz nor Amash decided to run. But Democrats and Republicans might not be so lucky next time. And there will always be millions of Americans who wish they had a different choice. They will have reasons, whether that's simply about sending a message, a specific policy divide or a character issue they can't overlook. Give them the power to send that message. Then let them rank their next choice.

When Amash announced his decision on Twitter, he bemoaned a polarized public, and too many people who are too quick to view every debate through red and blue lenses. "Social media and traditional media are dominated by voices strongly averse" to "a viable third candidate," Amash wrote. He raises a valid concern — but one that's not likely to change in our current winner-takes-all, first-past-the-post system.

Third parties have an important role to play in this conversation as well. After all, they can't expect to be welcomed to the table given the reality of the system. Perhaps that creates a role for Amash during this campaign, as an evangelist for ranked choice voting and the importance of electoral reform. Here's potential common ground for Democrats, Republicans and third parties alike. The major parties fear spoilers. Independents don't like to feel bullied. All of us want fairer elections. Nobody likes a giant sucking sound. There's more common ground here than we think.