"The guy should be fired on the spot,” Fauci said of Fox News' Jesse Watters 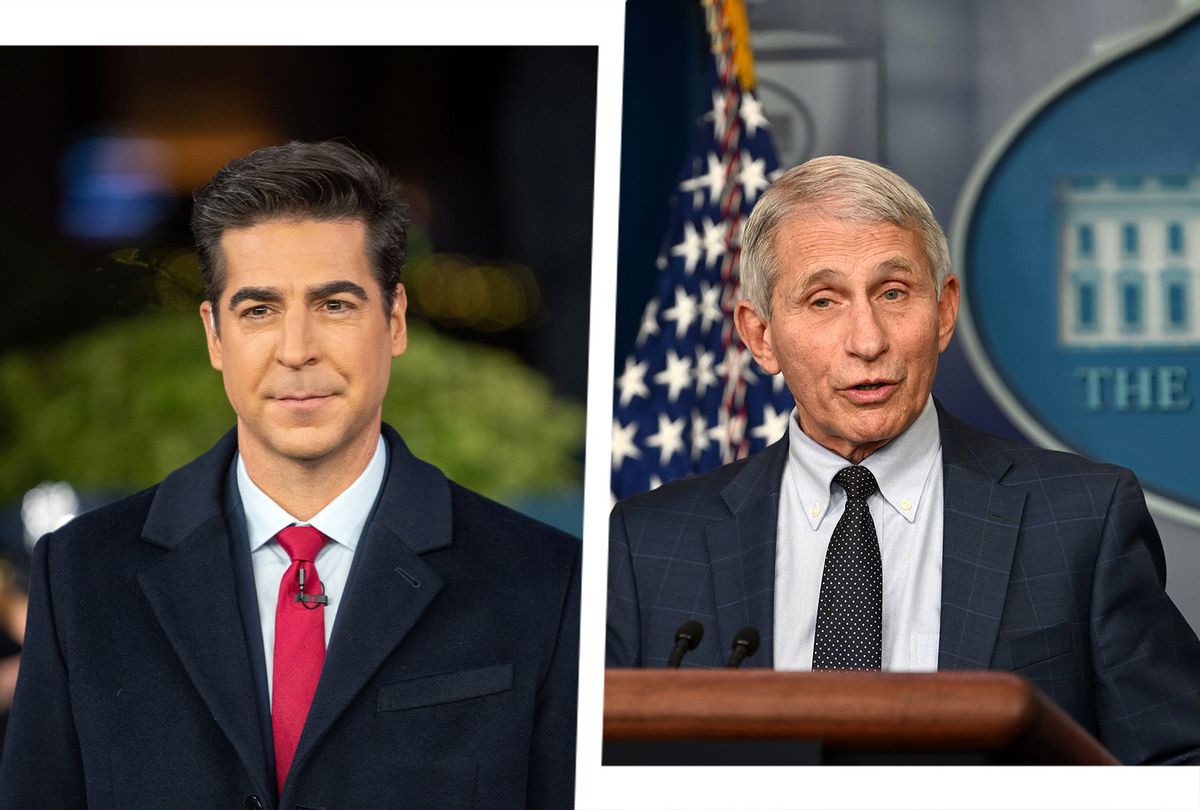 Anthony Fauci, the president's chief medical advisor, called for the firing of a right-wing commentator who encouraged a crowd to execute a rhetorical "killshot" against Fauci.

"The guy should be fired on the spot," Fauci said in response to a speech made during Fox News commentator Jesse Watters' Tuesday appearance at AmericaFest – a conservative youth conference hosted by Turning Point USA in Phoenix, Arizona.

While onstage, Watters instructed a crowd of young conservative activists to "ambush" Fauci with a barrage of questions related to the origin of COVID-19. Over the past year, the virus' origin has grown into the subject of great conjecture amongst members of the far-right, who have baselessly alleged that Fauci facilitated a "lab leak" from the Wuhan Institute of Virology.

RELATED: Dr. Fauci goes off on "lying" Rand Paul: "You don't know what you're talking about!"

After overwhelming Fauci with a bombardment of questions, Watters continued, conservatives should round him off with a rhetorical "kill shot."

"Now you go in for the kill shot," Watters explained.

"The kill shot? With an ambush? Deadly. Because he doesn't see it coming. This is when you say: Dr. Fauci, you funded risky research at a sloppy Chinese lab. The same lab that sprung this pandemic on the world. You know why people don't trust you, don't you?"

On Tuesday morning, Fauci called Watters' remarks "horrible," adding that they reflected "the craziness that goes on in society."

"The only thing that I have ever done, throughout these two years, is to encourage people to practice good public health practices," Fauci told CNN's John Berman in an interview. "And, for that, you have some guy out there saying that people should be giving me a 'kill shot'? To 'ambush' me? I mean, what kind of craziness is there in society these days?"

Last month, Fauci was similarly targeted by Fox Nation personality Lara Logan, who compared him to "Joseph Mengele, the Nazi doctor who did experiments on Jews during the Second World War and in the concentration camps."

"This is what people say to me, that he doesn't represent science to them," Logan said during a Fox News interview. "And I am talking about people all across the world are saying this."

Fauci later slammed Logan's as "unconscionable," calling it an an "insult to all of the people who suffered and died under the Nazi regime in the concentration camps."

Thus far, Fox News has yet to reprimand Watters or Logan for their incendiary comments. In a Tuesday statement, the channel said that Watters' "words have been twisted completely out of context."

Over the past year, the channel has been the source of considerable invective against the Fauci. According to Media Matters, Fox News personalities have "attacked Fauci over 400 times just since February 22."