How Trump and his MAGA allies are purging the GOP of "disloyal" Republicans: report

“Donald Trump and his associates are systematically reshaping the Republican Party," to ensure loyalty to Trump 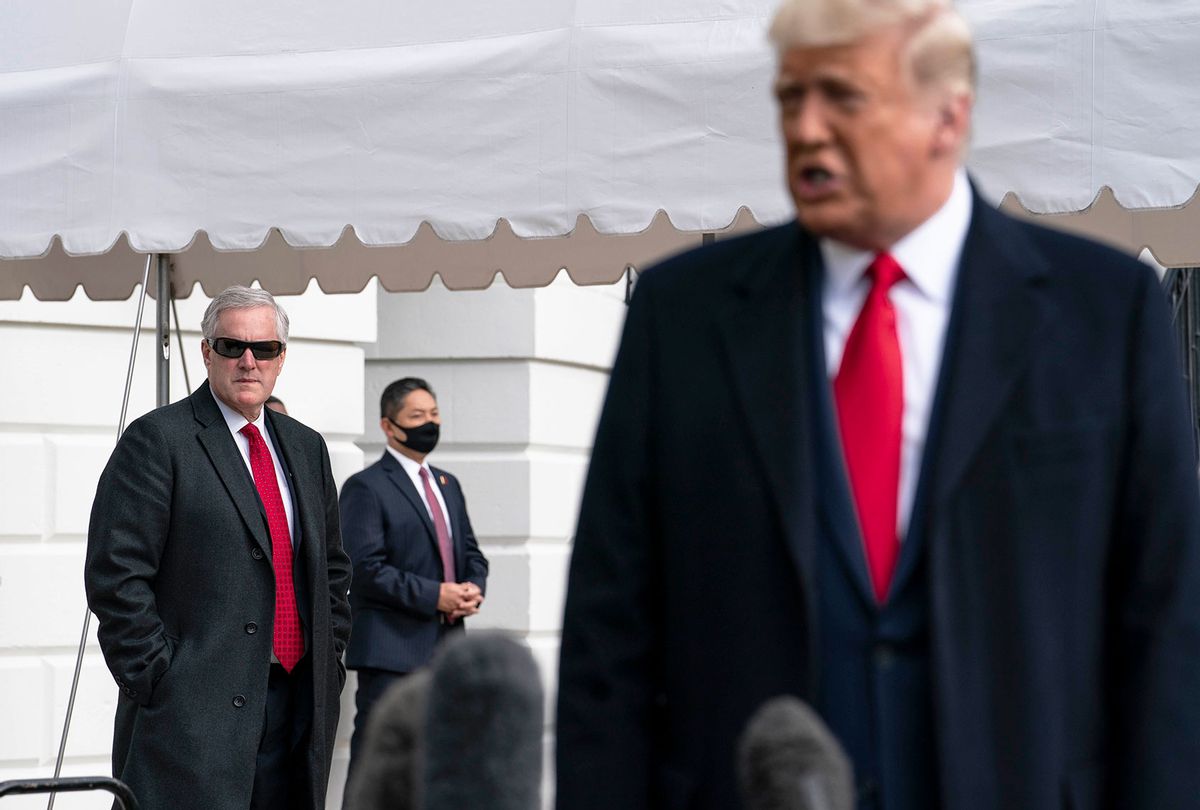 White House Chief of Staff Mark Meadows listens as President Donald Trump speaks to the press outside the White House on October 30, 2020 in Washington, DC. President Trump will travel to Michigan, Wisconsin and Minnesota for the campaign rallies ahead of the presidential election on Tuesday. (Sarah Silbiger/Getty Images)
--

During the 1980s, President Ronald Reagan had a big tent philosophy — stressing that someone who agreed with him 80% of the time was an 80% ally, not a 20% enemy. But former President Donald Trump and the MAGA movement, in contrast, demand 100% obedience and ideological purity from Republicans. In an article published by Axios on December 9, reporters Jonathan Swan and Andrew Solender describe the Trumpian effort to purify the GOP going into the 2022 midterms and purge it of any Republicans who are "disloyal" to the MAGA movement.

Swan and Solender explain, "Donald Trump and his associates are systematically reshaping the Republican Party, working to install hand-picked loyalists across federal and state governments and destroy those he feels have been disloyal, sources close to the former president tell Axios…. If most or all of Trump's candidates win, he will go into the 2024 election cycle with far more people willing to do his bidding who run the elections in key states."

The reporters add, "He will also have a well-funded policy and political infrastructure and his own social media ecosystem. He's made dozens of endorsements since last year's election, with many more expected ahead of crucial primaries next year."

Veteran Democratic strategist James Carville, over the years, has been vehemently critical of Democratic purity tests, saying that elections should be about "addition, not subtraction." In that sense, Carville is bringing Reagan's big tent approach to the Democratic Party. And Trump's quest for total, unquestioning obedience to the MAGA movement begs the question: do purity tests risk alienating swing voters in the 2022 midterms?

Swan and Solender put it this way: "Will his hand in these contests help Republicans sweep to new majorities in 2022, or divide the GOP in brutal primaries that indirectly boost Democrats in the general election?"

"Trump is tapping his national network of allies to identify Republicans who were 'weak' in 2020 because they refused to go along with his efforts to overturn the election," Swan and Solender report. "No office has proven too small; his apparatus touches everything from unseating governors, members of Congress, state legislators and secretaries of state, to formulating policy and influencing local school boards."

A key part of Trump's MAGA purity test is whether or not a Republican embraces the Big Lie — that is, the false, totally debunked claim that widespread voter fraud caused the 2020 election to be stolen from Trump.

A former Trump adviser told Axios, "We try to get him onto other topics, but you always get dragged back."

Swan and Solender note, "Trump is also going after the few congressional Republicans who have defied him. He's endorsed primary challengers to Sen. Lisa Murkowski, R-Alaska, and Reps. Liz Cheney, R-Wyo., Fred Upton, R-Mich., Peter Meijer, R-Mich., and Jaime Herrera Beutler, R-Wash., — all of whom voted for his impeachment…. Trump's relentless messaging has forged an alternate reality for his followers: 58% of Republicans in an Axios/Ipsos poll last month said there was enough fraud to change the outcome of the 2020 election. Now, he's harnessing that energy."