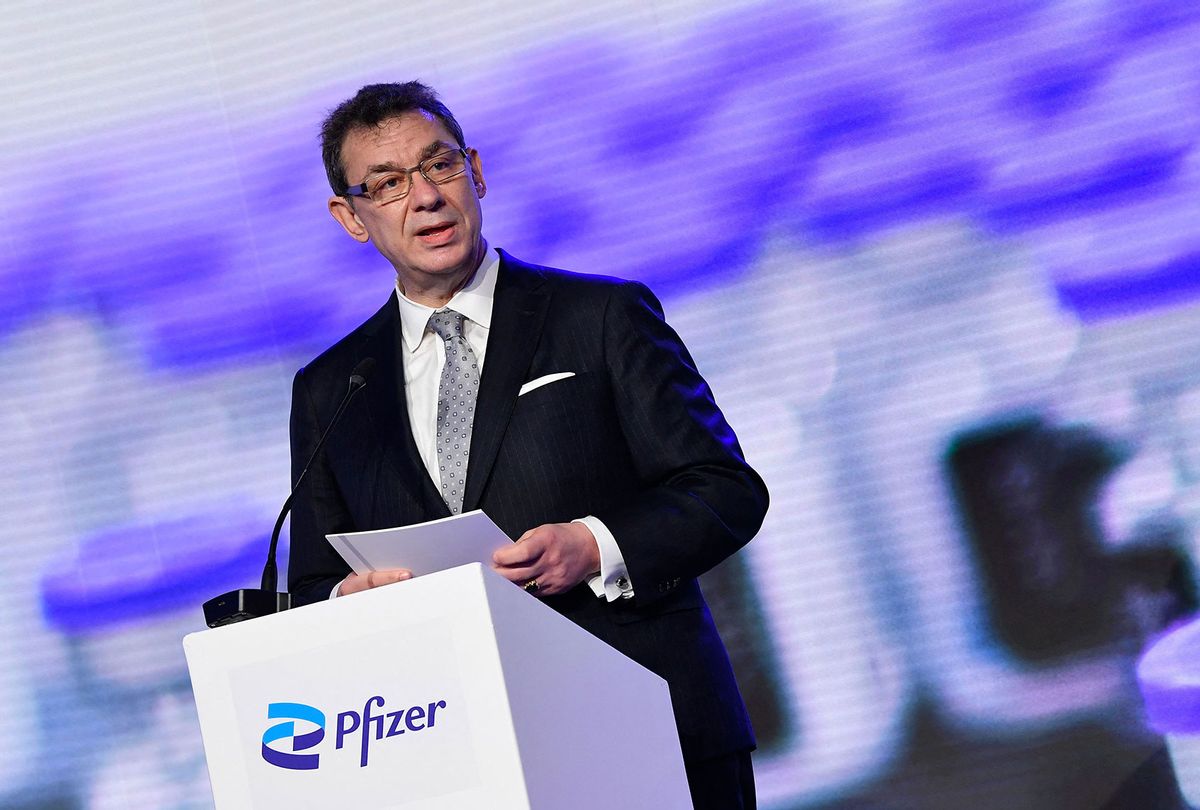 Pfizer CEO Albert Bourla talks during a press conference with European Commission President after a visit to oversee the production of the Pfizer-BioNtech Covid-19 vaccine at the factory of US pharmaceutical company Pfizer, in Puurs, on April 23, 2021. (JOHN THYS/POOL/AFP via Getty Images)
--

In 1998 the South African Pharmaceutical Manufacturers Association teamed up with 39 pharmaceutical companies to sue Nelson Mandela's government for suspending international trade agreements that protected the patents to HIV antiretroviral medication.

At the time of the lawsuit, it was estimated that one in nine South Africans had contracted HIV, and the cost of providing the patent-protected medication was largely out of reach to the 4.7 million people in the country who needed it.

Defending his decision to bypass the WTO's agreement protecting intellectual property, Nelson Mandela said in a TV interview: "I think the pharmaceuticals are exploiting the situation that exists in countries like South Africa — in the developing world — because they charge exorbitant prices which are beyond the capacity of the ordinary HIV/AIDS person. That is completely wrong and must be condemned."

"The government is perfectly entitled, in facing that situation, to resort to generic drugs and it is a gross error for the companies, for the pharmaceuticals, to take the government to court," Mandela continued.

In deciding to ignore patent laws, Mandela made a moral decision that saving lives was more important than protecting private property rights. The pharmaceutical companies argued back that if developing countries could effectively steal their medicines, they would have less incentive to research new drugs in the future that could also save millions of lives.

Twenty-three years later, history is repeating itself. In October of 2020, South Africa and India noticed that the overwhelming amount of pre-purchasing agreements for COVID-19 vaccines were being negotiated by rich countries, meaning those countries would get the vaccine first. The two nations went to the World Trade Organization and asked for a temporary suspension on patents for all COVID-related medicines and technologies, so that the developing world could produce vaccines on its own without having to rely on handouts from COVAX or donations from rich countries.

The pharmaceutical lobby instantly lashed out against South Africa and India's proposal. Among their arguments was that even if they surrendered their patents, there weren't enough manufacturers in the developing world to make the vaccines — and, they argued that even if there were, it would take ages for the technical transfers necessary to get them up and running. That likely isn't true: this week, Doctors Without Borders identified 120 manufacturers in Asia, Africa and Latin America with the technical requirements and quality standards needed to produce mRNA vaccines.

But putting technical arguments of who-can-do-what aside, a bigger question is not who should be allowed to produce the vaccine — but who has the moral right to own it in the first place.

The COVID vaccines used in high-income countries were developed largely — in some cases entirely — with public funding. The AstraZeneca vaccine was invented at the Jenner Institute at Oxford University with 99% of public funding. Moderna received 100% of its funding for the vaccine from Operation Warp Speed, and the Pfizer/BioNTech vaccine was funded with almost half a billion dollars from the German government. Pharmaceutical companies have also invested huge sums of their own money in vaccine development, without which they would not have been able to bring about the vaccines so quickly.

But let's pretend that the public invested nothing, and it was only a small handful of multinational pharmaceutical companies that took the risk and invested millions of dollars to develop the vaccines. Surely the pharma companies are entitled to a reward for their investment, and the great service they are providing humanity by supplying life-saving medicine.

But how much should that reward be? Is a couple of million enough? How about a few billion? Pfizer has said it will make $33.5 billion in revenue from sales of its vaccine this year. Even after taking out a chunk that pharma companies say will be reinvested for the development of new medicines, Pfizer's shareholders are left with billions to line their Christmas stockings.

Western society has long enshrined the right to private property; as the old saying goes, possession is 9/10ths of the law. The pharmaceutical companies clearly have the right to sell their property – in this case, vaccines – to whomever it wants and at whatever price it sees fit. Yet Western societies are also governed by principles of The Enlightenment, among them a right to "life, liberty and the pursuit of happiness." So what happens when these rights abut? Should somebody's right to "life" mean they have a right to take somebody else's private property? Representatives from the pharma lobby would likely say no, while global health advocates would probably say yes.

Because I'm home alone with my eight-year-old daughter and desperately trying to avoid watching the first Harry Potter movie for the hundredth time I decided to divert her attention away from the TV by asking her how she would resolve this moral dilemma. She responded in typical childhood fashion: "The pharma companies are not being very very nice, and if sick people need the vaccine they should go to the police and make the pharma companies give them the vaccine." I suppose that any daughter of a left-leaning journalist is likely to produce the same answer to this ethical quandary, but I'd be very interested to hear how the children of Pfizer's C-Suite would respond.

Children are usually quite good at answering black and white philosophical questions that lack nuance. Voldemort is bad, Harry Potter is good. Killing people is wrong, as is stealing Mommy's white chocolate bar. The public invested billions of dollars. Millions of lives are at stake along with hopes and dreams of getting back to "a normal way of life." If pharma companies are robbed of the rights to their private property for COVID-19 vaccines, who's to say the same won't happen for HIV or diabetes drugs.

Fortunately for policy makers, their jobs are not currently under threat by primary school–aged children. But delegates at the WTO are essentially being asked the same question, only with a lot more nuance that can easily derail the central question of how the global community should organise itself to respond to a public health emergency. It's been well over a year since the WTO council responsible for intellectual property agreements was asked to consider South Africa and India's proposal for an intellectual property waiver. So far nothing tangible has happened. If delegates don't know what to do about the waiver, perhaps they can turn to their children for advice, as their moral compass is apt to be more sound.

Another fun question to ask one's children is how much money the people should give the pharma companies in exchange for taking the vaccine and giving them to poor countries. My daughter said: "Maybe like five or ten euros." To her that is a lot of money.