By watering down COVID self-isolation period, CDC defers to commerce

“When you [cut] back your safety standards in such a transparent way, a science agency just loses credibility" 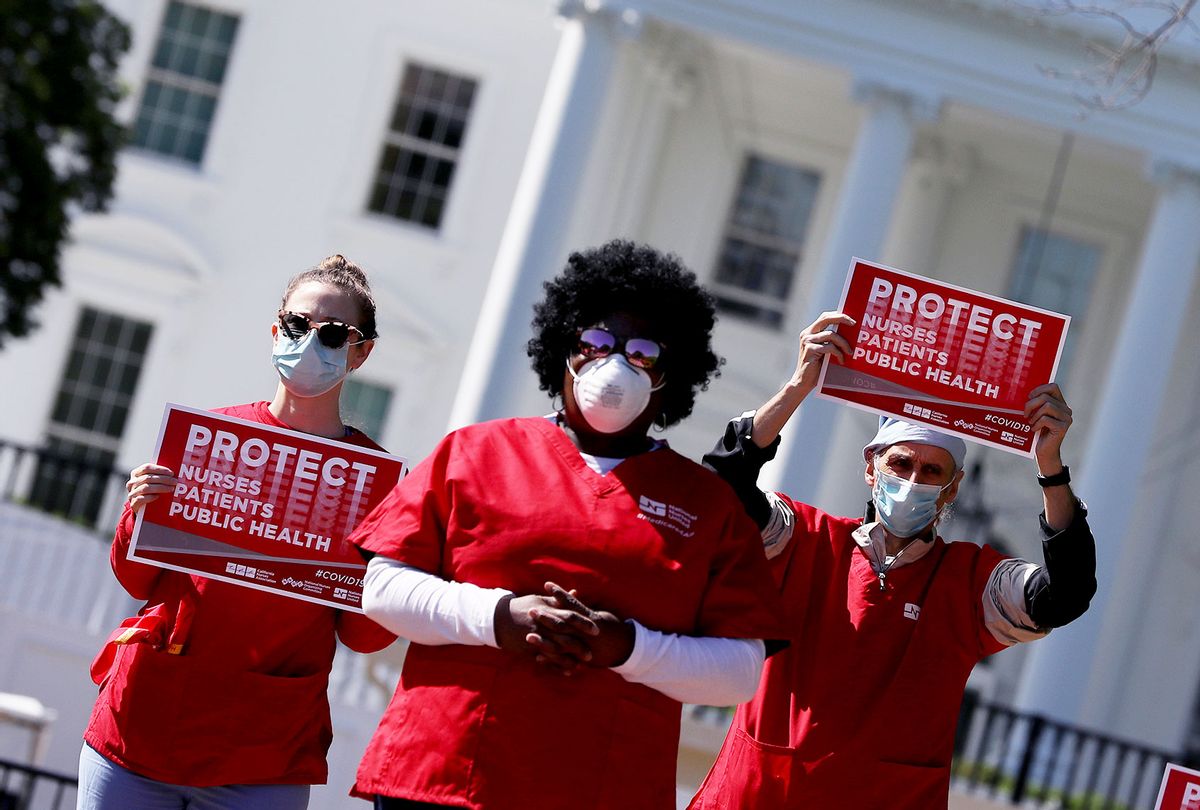 Members of the National Nurses United read the names of the 88 nurses they say have died from COVID-19 while demonstrating in Lafayette Park across from the White House May 07, 2020 in Washington, DC. The union is protesting during Nurses' Week to demand that their employers and the federal government 'provide safe workplaces by providing optimal personal protective equipment (PPE), safe staffing, presumptive eligibility for workers’ compensation benefits and more during the novel coronavirus pandemic. (Chip Somodevilla/Getty Images)
--

The CDC's decision to halve the self-isolation period for COVID-positive healthcare workers and the rest of the essential workforce is being roundly condemned by the unions that represent that workforce and the occupational health experts they trust.

The policy, which does not even require a negative test to return to work, was called "reckless" by public health experts interviewed by the Boston Globe.

Curiously, the Centers for Disease Control and Prevention reduced the quarantine requirement from ten days to five after a few notable worker shortages. First, there was the cancellation of thousands of flights due to worker shortages starting before Christmas, which made major news headlines. But in the background lurks widespread healthcare worker shortages throughout the nation, which have occurred as tens of thousands of essential workers were sidelined due to infection with the hyper-contagious omicron variant.

For front-line unions, the CDC's kowtowing to business interests is merely one in a long line of examples of the CDC's expedient disregard for workers. Early on, the nation's leading public health agency notoriously instructed nurses to ignore their training on infectious disease control and reuse their N-95 masks for days at a time.

At the time, the nurses' unions predicted three things would happen: their members would get sick, many would die, and the hospitals would themselves become vectors for the virus. All three things happened.

Scroll forward to May of this year, when the CDC decided to lift the universal mask mandate for the vaccinated in indoor public places. The same nurse unions, joined by frontline retail worker unions, begged the CDC to reconsider. They rightly pointed out that too much of the country was unvaccinated; that vaccinated people could still transmit the virus; and that the CDC's mandate change, which occurred under the guise of "open[ing] the economy," would actually help spawn more variants.

These frontline experts, whose lived on-the-job experience is consistently ignored by public health bureaucrats, warned that the lifting of the universal mask mandate promoted a false sense of invincibility for the general public and the obscuring of the key medical reality that vaccinated people can transmit the virus.

In no time at all, the delta variant got traction and in a matter of weeks, the CDC was revisiting the issue — suggesting even the vaccinated consider masking up after consulting their local county's transmission rate.

Now, the same agency that has consistently ignored the healthcare unions wants to ensure the nation's hospital have sufficient COVID-fodder and bodies in the sky to keep America flying at any price. And so, it appears they have calculated that the aggregate risk of spreading COVID by radically reducing the quarantine time for these essential workers is worth taking if it keeps the hospitals and the airports humming.

For the public unions from New York and New York City, with veteran members in their ranks of the NYPD, the FDNY and scores of other agencies, this homage to commerce is eerily similar to what the Bush administration's EPA and former Mayor Rudy Giuliani cooked up when they promoted the false notion that the air in an around lower Manhattan was safe to breathe so as to assure that Wall Street opened quickly after the 9/11 WTC attack.

"The New York State Nurses Association [NYSNA] condemns the Centers for Disease Control (CDC)'s recent emergency guidance as potentially dangerous for healthcare workers and the communities we serve," wrote Pat Kane, a registered nurse and the executive director of the association. "This guidance is inconsistent with proven science, vague, and doesn't provide definitions or explain standards at a time when decision-making for healthcare systems is critical."

According to NYSNA, healthcare worker infection rates are not even being tracked; as they write, "there's no substantial evidence behind the CDC changing this guidance. But there is a healthcare staffing crisis the CDC cited as the justification for it."

Death and COVID is not an abstract concept for NYSNA.

The union lost an estimated 40 members to the virus. They are part of an honor roll, which the Guardian and Kaiser Health News created last April, which includes the names of the estimated 3,600 healthcare workers that died in the first year of the pandemic alone.

"One key finding: two thirds of deceased healthcare workers for whom we have data identified as people of color, revealing the deep inequities tied to race, ethnicity and economic status in America's healthcare workforce," the newspaper reports. "Lower-paid workers who handled everyday patient care, including nurses, support staff, and nursing home employees, were far more likely to die in the pandemic than physicians."

Our federal government has no idea how many essential workers have died from their occupational exposure, and it certainly is clueless about how many thousands languish in the hell of long haul COVID, often having to fight their employers who have rejected their Workers' Comp claims.

The leadership of HPAE, Health Professionals and Allied Employees, New Jersey's largest health care union, blasted the CDC's watering-down of the COVID quarantine standard and looped in the US Department of Labor's Occupational Safety and Health Administration for going along. The union rightly observes that the latest moves on behalf of management will accelerate the exodus from the profession, further hampering the ability of the entire health care system to withstand the next wave — or the next pandemic.

Indeed, our national health care system is so deeply rooted in the ideology of market capitalism that it thrives on the scarcity it promotes, which is enabled entirely by its Beltway protectors. This sick and brutal system feeds off the scarcity of N-95s, COVID tests, and now, reducing the time that healthcare and essential workers receive to heal themselves from the virus they contracted serving us.

Send in the troops

The system is coming apart, and only those in its employ continue to resist calling it out for just how broken it all is.

"The COVID omicron variant has shown to be a highly contagious and infectious virus, as cases are quickly spiking, threatening to overwhelm the hospitals in our state," HPAE said in a statement. "In fact, assistance from the National Guard and FEMA have already been solicited as some of our hospitals are already having difficulty meeting the demands of the increased census."

The statement continued, lambasting CDC and OSHA for not protecting them sufficiently.

"Nearly two years after the start of this pandemic, healthcare workers are seeing more of the same watering-down of protections from both the CDC and OSHA," the statement ran.

"Getting workers back on the job sooner to ease the staffing shortage is counterintuitive," HPAE observed. "It will only result in more illness, exhaustion, stress, and exodus from the professions.  Healthcare workers and patients alike are at risk.  During a surge it is time for more protections not less."

The Fire Department confirmed that close to 20 percent of their EMS members are out sick; Variale estimates half of that roster is suffering with COVID. Meanwhile, call volume continues to climb as omicron rages.

"It's clearly the case that whenever they have a shortage, they choose to disregard our safety," said Variale of the CDC's latest guidance. "Now, they see a labor shortage in healthcare industry, nurses, doctors, EMTS and paramedics so they are cutting the quarantine down from ten days to five. How convenient."

Variale continues: "When you start cutting back your safety standards in such a transparent way, a science agency like the CDC just loses their credibility. It all goes back to our leadership's failure to invest in a public health system that not only cares for our people but prepares for a pandemic like we are dealing with. Now, their failures are being put on the shoulders of the people, like my members, who are going to have to continue to face these risks to themselves and even their families."

Charlene Obernauer is the executive director of the New York Committee for Occupational Safety and Health, a non-profit advocacy group supported by unions and occupational health experts.

"We looked into the science behind this policy [shift] and having these shorter isolation periods doesn't seem consistent with the science," Obernauer said during a recent phone interview.

Obernauer continued. "From our perspective, when our front-line healthcare workers are getting COVID, they are exhausted. They have all this stress landing in their laps and our response is to shorten the amount of time that someone gets off after they have had COVID is not a way to support healthcare workers that have given everything to keep our communities everything to keep us safe."

"We said we wanted to hear from medical professionals on the best guidance for quarantine, not from corporate America advocating for a shortened period due to staffing shortages," wrote Sara Nelson, president of the Association of Flight Attendants, CWA, in a statement. "The CDC gave a medical explanation about why the agency has decided to reduce the quarantine requirements from 10 to five days, but the fact that it aligns with the number of days pushed by corporate America is less than reassuring."

Nelson was particularly incensed by how "pandemic fatigue" had led to "decisions that extend the life of the pandemic" by putting workers at risk.

Nelson continued. "After more than 800,000 funerals, millions suffering effects of long COVID, our hospitals so full people can't get the medical treatment they need, and frontline workers facing violent attacks simply for working to keep everyone safe, can we finally take this pandemic seriously and do what needs to be done to end it? Our workplace is the world. We will isolate ourselves from the world if we don't lead on safety."

Read more on frontline workers during the pandemic: