"There is a decoupling going on because there is so much vaccination that has occurred," one expert tells Salon 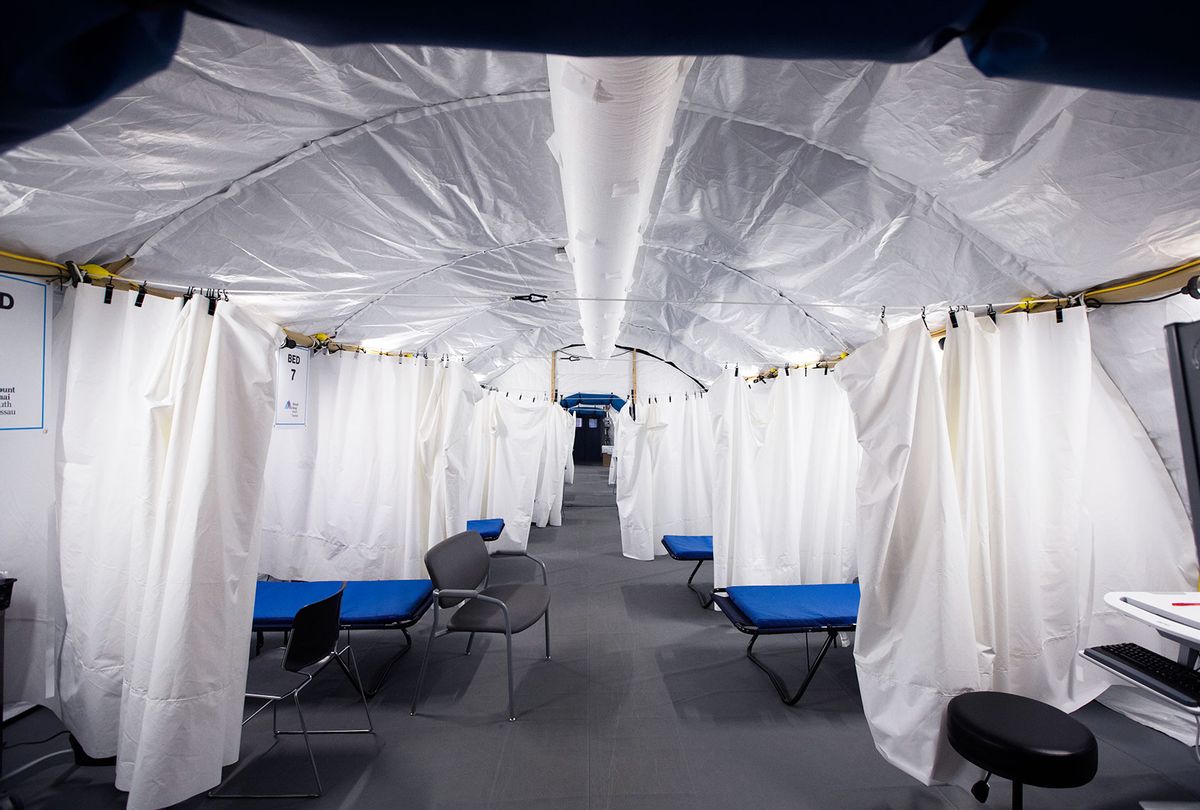 Once again, New York City is the center of a COVID-19 outbreak.

As the omicron variant of COVID-19 continues to spread across New York City, it has been estimated that one in 50 Manhattan residents have been infected with COVID-19 over the past week. Last week, the state of New York as a whole broke a single-day record, topping 49,708 positive cases on Tuesday. Previously, the record was set on January 11, 2021, when the seven-day average was 251,232.

In New York, COVID-19 is spreading across at a faster rate than at any other point during the pandemic, including during the deadly first wave in spring 2020.  More than 110,000 people have tested positive just since Christmas Day in New York City, according to the New York Times.

However, unlike previous surges, hospitalizations have not climbed as fast as positive cases. That might seem like good news on paper — and may suggest that the pandemic is on to a less deadly phase.

But experts say the situation in hospitals is a bit more complicated than it seems at first.

According to the New York State governor's office, hospitalizations increased on Tuesday by 12% in one day, totaling 6,173 in the state hospitalized. That number is 647 people more than were hospitalized on Monday.

Notably, hospitalizations in New York are about one-third of what they were during the worst part of the 2021 winter surge. While hospitalizations have nearly doubled over the last two weeks, they haven't reached the levels of previous COVID-19 waves.

Dr. Amesh Adalja, a senior scholar at the Johns Hopkins Center, told Salon that it makes sense that cases are rising faster than hospitalizations.

"Cases are expected to rise at a faster rate than hospitalizations because not everyone who gets infected requires hospitalization," Adalja said. "There is a decoupling going on because there is so much vaccination that has occurred."

Adalja emphasized that "cases are not of the same caliber in the pre-vaccine era."

"This is why the focus needs to be on hospitalizations, not on the sheer number of cases which are going to increase for some time and ebb and flow," Adalja said.

Indeed, in many places where hospitalizations are increasing, a majority of those hospitalized are unvaccinated. For example, this week the Louisiana Department of Health announced that 449 people in Louisiana were hospitalized with COVID-19 – a number that doubled in a week.

"The last time we reported this many COVID-19 hospitalizations was mid-October, as we came down from our fourth and then-worst COVID-19 surge," the Louisiana Department of Health stated in a news release. "Eighty percent of people currently hospitalized with COVID-19 are not fully vaccinated."

In Florida, coronavirus cases and hospitalizations are surging; specifically, the number of people in Florida hospital in-patients has reached 3,800 this week. But again, this is nowhere near the high hospitalization rates Florida saw between July to September, when the delta variant swept across the state. In August, COVID patients were accounting for over 25% of hospital patients; currently, COVID-19 patients in Florida take up 7.22% of all inpatient beds.

Across the country, in California's Los Angeles County, health officials expressed concern over increasing hospitalizations to 966 people this week, compared to 748 the week before.

Across the United States over the last month, the number of pediatric hospitalizations has increased by 52 percent, according to an NBC News analysis of Department of Health and Human Services data. That brings the number to 1,933 children hospitalized. On Christmas Eve, the New York State Department of Health sent a notice to physicians alerting professionals of an "upward trend" in pediatric hospitalizations. Notably, half of the hospital admissions were those under the age of 5 years-old, who aren't yet eligible for the vaccine.

"I think the important story to tell here is that severity is way down and the risk for significant severe disease seems to be lower," said Dr. David Rubin, a researcher at Children's Hospital of Philadelphia told the New York Times. "While we are definitely seeing more transmission among children, both vaccinated and unvaccinated, I think we have to be very careful to avoid sending the message that Omicron poses an unusual risk to kids."

Doctors are urging children who are eligible to get vaccinated as soon as possible.

"We need to get child vaccinations up," Mary T. Bassett, acting commissioner of the New York State Department of Health, told CBS. "We need to get them higher than they are, particularly in the 5- to 11-year-old age group."

Inside the omicron surge: